The Red Devils gave it a gusty effort … including a shot to win in the final 10 seconds … but Versailles came up with a big defense stop to beat Tipp for the first time in four seasons.

Versailles – The Versailles Tigers’ seniors rolled up 73 victories through the first three seasons of their varsity careers so the list of conquered opponents is long. But one name missing from the checklist was Tippecanoe High School. 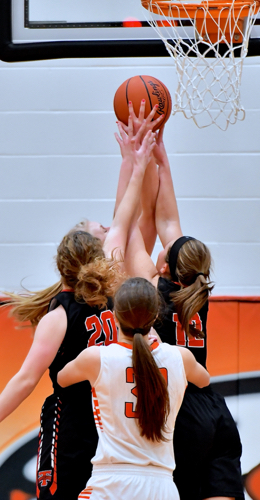 They got what they wanted.

And so did the Tigers.

Versailles’ seniors added Tipp’s name to their tally with a 54-53 victory that wasn’t secure until Tigers’ senior Kami McEldowney stripped the ball away with two seconds left on Tipp’s final shot. The ball bounced into senior teammate Danielle Winner’s hands as time ran out to cap a frantic final 10 seconds.

“It’s always been a really close game, especially in junior high where, man, those were intense games,” said McEldowney, who finished with a team-high 14 points. “Just playing them my senior year and beating them this final time it’s awesome.”

Winner gave Versailles (13-1) its final lead with 33 seconds left and the game tied 53-53. She missed the first of two free throws but calmly sank the second for the 54-53 lead. 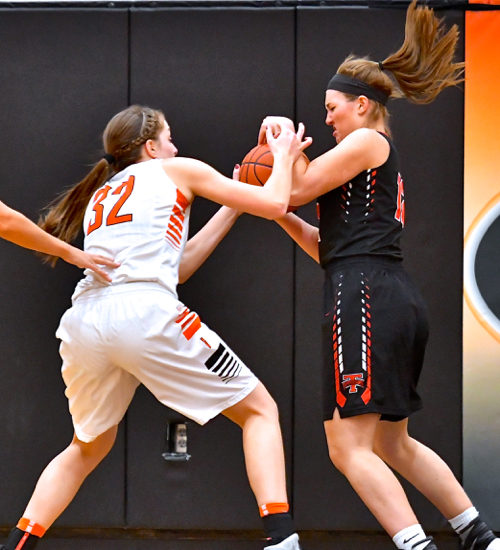 Tipp (10-1) called timeout with 27 seconds left to set up its final play. The Red Devils worked the ball around the perimeter and with seven seconds left senior Maddie Frederick fired from the corner. Her three-point attempt bounced off the far side of the rim. Tipp senior Cali Stewart and McEldowney battled for the ball. It bounced to Tipp senior Allison Mader with two seconds left. As Mader brought the ball up for a last-gasp shot from just outside the arc, McEldowney – on her knees after diving for the loose ball – knocked it away as Mader brought the ball to her waist.

Winner scooped up the loose ball as time expired.

Tipp coach Andy Holderman thought Frederick’s shot from the corner was a good look. And Holderman knows a little something about good shots. When he graduated from Wright State University in 1994 he left as the Raiders’ career leader in 3-pointers.

But Holderman thought the Red Devils had a couple other chances to score during their final 27-second possession. 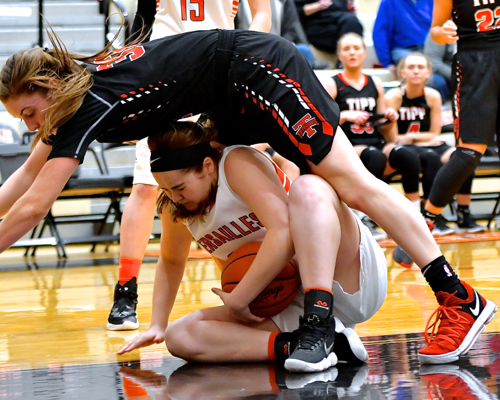 Was it basketball?  Or a game of Leap Frog?

“I thought the initial shot wasn’t a bad one,” Holderman said. “Earlier in that possession we had an opportunity to get the ball in the short corner and I think a dive down the lane, that spot would have been wide open. We didn’t get the ball where we needed to. Credit Versailles. They’re a fantastic team.”

The popular opinion among fans leaving the gym is that the Red Devils are, too.

The game had six lead chances and seven ties. Four lead changes and three of those ties came in the fourth quarter.

“With it not being MAC and playing this great of competition, man, this gets us ready for the long road ahead of us. It’s great playing these teams,” Kami McEldowney said. 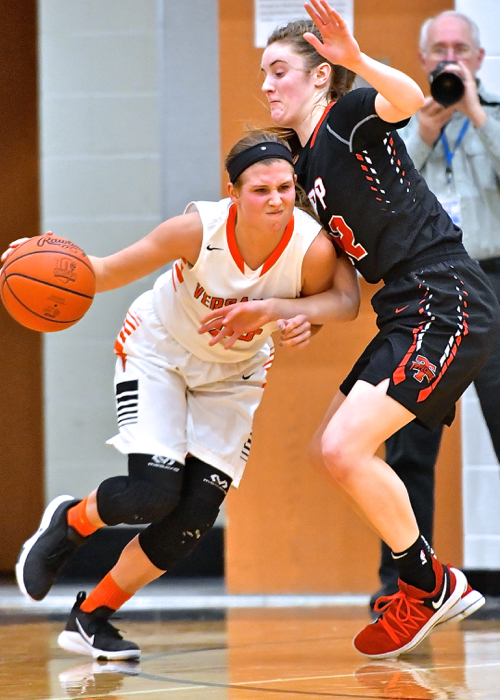 Tipp’s Maddie Frederick pressures Versailles’ Ellen Peters on her drive to the hoop.

Frederick, an Iowa State University recruit, moved back to the Dayton area after playing the last three seasons in Chandler, Ariz. The Kettering native led Hamilton High School to a 26-4 record and an Arizona state championship her sophomore season. She was also a Gatorade Player of the Year nominee.

Mix in Stewart (13 points), Mader (12) and junior Brooke Aselage (7) and the Red Devils are primed for another postseason run.

“You play these games for that tournament run. This was a tournament-type atmosphere,” Holderman said. “Being able to go against their physicality. And all those things you can’t simulate in practice is a great opportunity for us in the postseason. These games do us a lot of good.

“The whole goal of every day is to be better when you leave the court than when you stepped on it. That’s kind of been our mentality throughout the season. This game will be a benefit for us because of the physicality in the rebounding and defending the post.” 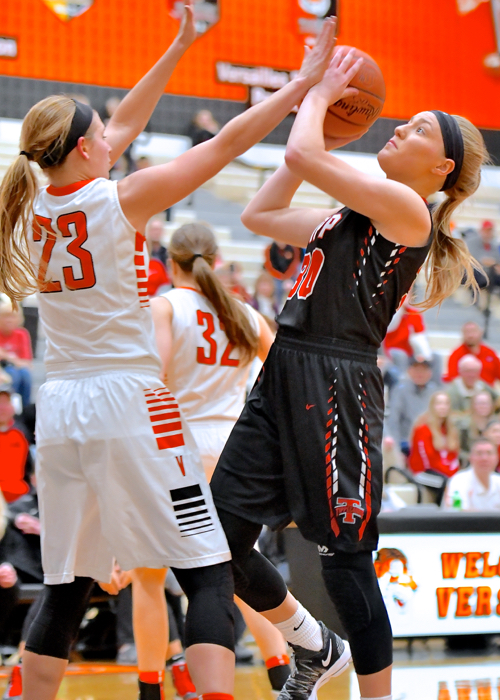 Danielle Winner (10 rebounds), Lindsey Winner and junior Elizabeth Ording helped the Tigers to a 26-23 rebounding advantage, most notably in the first half when Versailles build a 36-29 halftime lead with 15 rebounds that led to 10 second-chance points.

Seven different players scored for Versailles, including 12 each from Caitlin McEldowney and Danielle Winner. Peters added seven. McEldowney also came up with a steal and jumper with 1:43 left to give the Tigers a 53-51 lead. 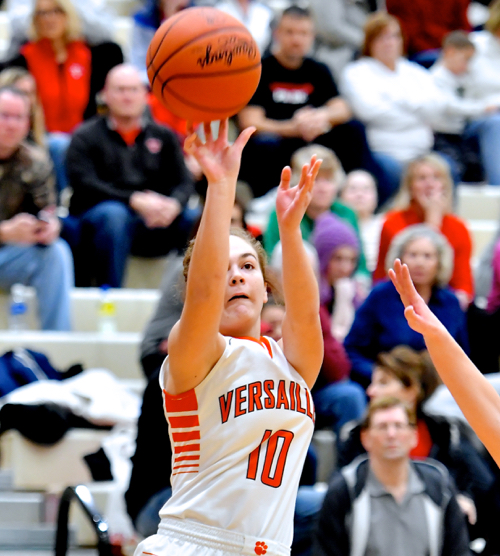 Kami McEldowney had four three-pointers, contributing to her team high of 14 points.

“I love my team. We work hard together and we have a great chemistry,” Kami McEldowney said. “It’s great having a team where we all split our points evenly. We all have 10 or eight points a game. It’s not like we rely on one person. That’s a great aspect to have on this team.”

Versailles’ win was its first over Tipp since beating the Red Devils 59-52 during the 2013-14 season. Tipp then rattled off three straight.

“It’s a boost of confidence to get a quality win like this, absolutely,” Versailles coach Stonebraker said. “It shows us what we aren’t doing well and what we are doing well. Over the course of the year we haven’t shown we could run some offensive sets in the half court. Our game has been to run, run, run. Today we had to run some offense sets and I think we were screening well, we were rolling well, our posts were getting open inside. Now we have to work on getting it in there.

“These girls were so excited to play this game. It’s a fun game to have on our schedule right in the middle of the season to see where you’re at. We play that game 10 times and no knows who wins.” 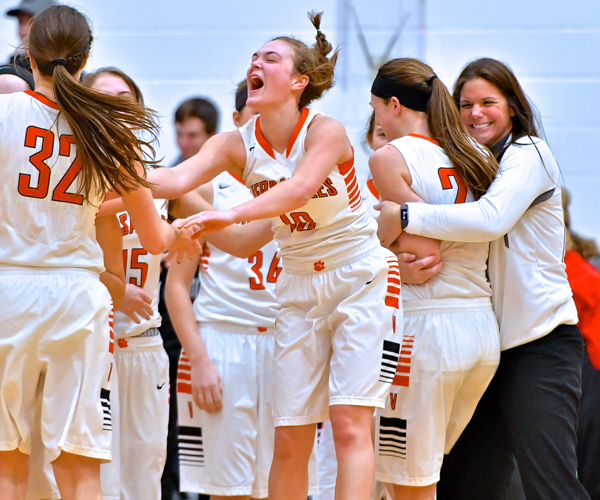 Versailles’ win was its first over Tipp since beating the Red Devils 59-52 during the 2013-14 season. 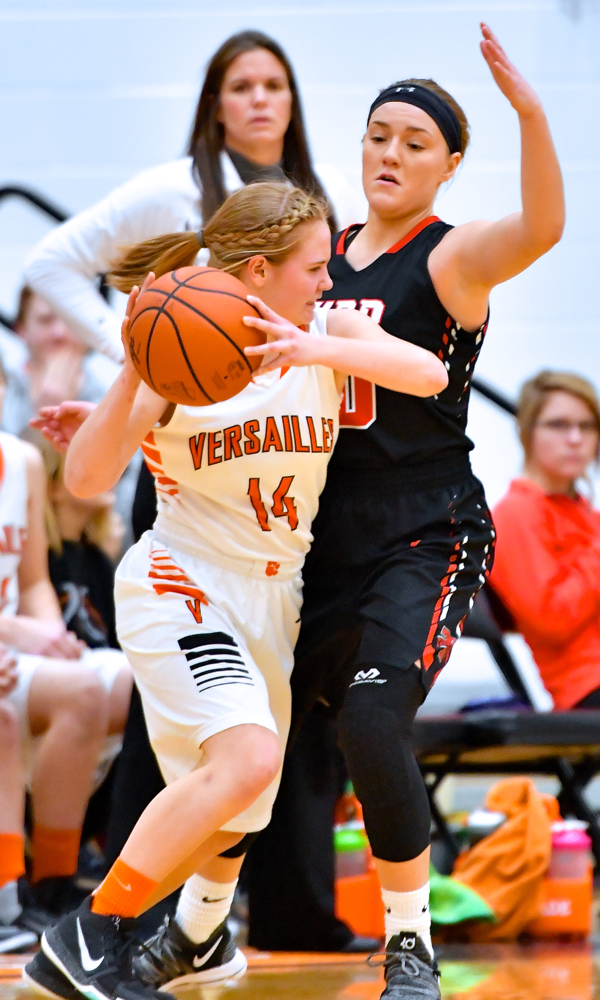