Seldom will you see a more dramatic turn of fortunes.  As bad as they could be in the first half, St. Henry and Tyler Schlarman caught fire in the second to overcome a big halftime deficit and beat rival Fort Recovery.

St. Henry – They say it’s why you play the game.  You never assume…anything!

And seldom will you see a more dramatic demonstration of the age-old axiom than Friday night’s backyard get-together between St. Henry and Fort Recovery.

Recovery, 5-2 (0-1) entering the game, shot out to a 29-17 halftime lead by shooting 52% from the floor, while St. Henry (6-2 and 0-1 in league play )shot 24% and looked like Red Klotz and the old Washington Generals, the traditional foil for the Harlem Globetrotters.  Had it not been for senior Tyler Schlarman’s 7 points…uh, well, you do the math!

St. Henry, smaller than they’ve been in years, relies on an aggressive attitude and tenacious defense.  And offensively, they’ve been known to rely on their three-point shooting of late.  When it’s good…they’re good.  And when it’s not…uh, well, you do the math.  It looks something like Friday’s first half.

But something happened during the halftime break.

“We were flat.  We had no attitude, no instinct.  It was really disappointing,”  said St. Henry coach Eric Rosenbeck, who also serves as high school principal.  “Payton Jutte is a great player and I think he had as many points by himself as we did by halftime.  So at halftime there were no ‘Xs’ and ‘Os’.  It was all about rah-rah and attitude.”

In other words, he (Rosenbeck) took ’em to the office. 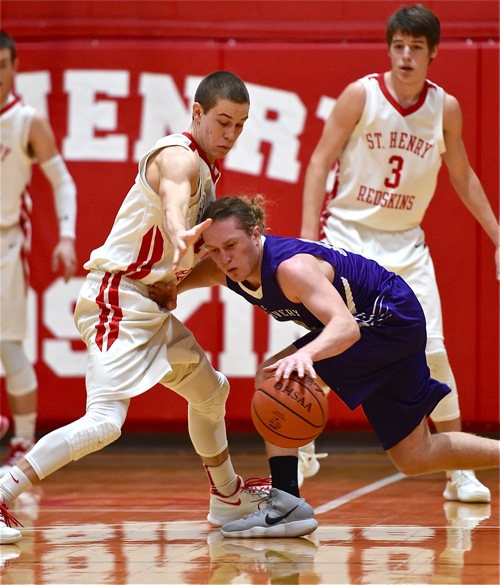 St. Henry’s Ryan Bruening turned up the defensive pressure on Recovery guard Cade Wendel in the second half.

They came out a different team in the third quarter.  They turned up the heat on defense.  They made Recovery uncomfortable in their offense, tentative, and hesitant to attack the rim.  Recovery, who shot 52% in the first half, shot 35% in the second half.  Payton Jutte, who had 14 first half points, would settle for just one made field goal, and 7 points in the second.

And on offense?  Two words…Tyler Schlarman.  Schlarman, who oppositely had 7 points in the first half, ignited for 20 in the second half, hitting five of six from three-point range (he had six for the game), and simply played like the Tazmanian devil, the old cartoon character.  Up and down, and side to side, he was indefatigable…unstoppable.

And, he had plenty of help from 6’3, 260 pound forward, Caden Niekamp.  A bull in the paint when he got his hands on the ball, he, too, proved to be unstoppable, hitting five of his six field goal attempts.

“We got a couple of shots to go down from Tyler and Caden,”  added Rosenbeck, shaking his head.  “And all of a sudden it went berserk.  It was awesome.”

Gradually the 14-point deficit (Recovery’s biggest lead) began to shrink…to nine, to five, to three, and at the 5:55 mark of the fourth quarter Schlarman canned his fourth three-pointer of the half to tie the game at 36-36. 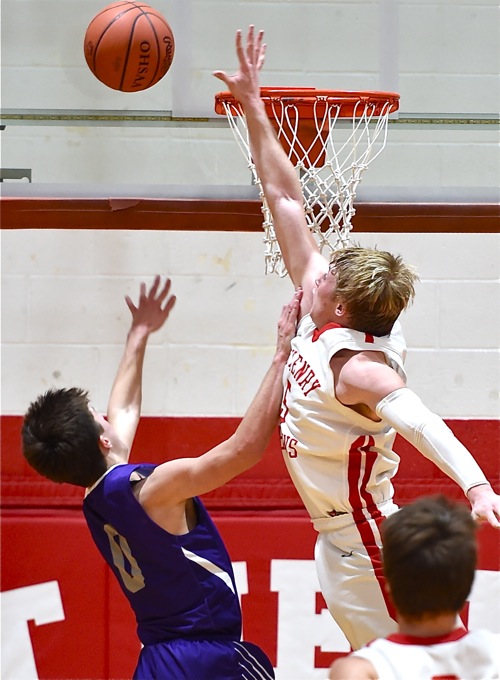 “The rim looked pretty big after you hit a couple,”  said Schlarman, shyly, in the post-game locker room.

And it looked like a thimble to Recovery on the other end, which suddenly found everything they shot highly contested.  Schlarman, a whirling dirvish at both ends, blocked an attempt by the Indians’ Grant Knapke, which sent the already-juiced crowd into another gear of frenzy.  And on the ensuing possession St. Henry’s Devin Huelskamp canned a three-pointer of his own to finally give his team the lead.  The place went nuts!

Frustration set in.  A technical foul on the Fort Recovery bench sent Schlarman to the line, where he extended the lead to five.  From that point it became academic.  St. Henry could do no wrong.  Recovery could do nothing right over the final two minutes, finished with 18 points for the half, and stumbled to an eventual 12-point loss.

“He was fantastic,”  said Fort Recovery coach Mike Bashore of Tyler Schlarman’s 27 points and laser-like three-point shooting.  “But we just quit executing on offense.  We were up twelve at the half, and then only scored four points in the third quarter.  Jutte going out with foul trouble hurt us, but we just stopped executing, cutting hard off screens, and our energy level just went way down.  Every shot they made it seemed to suck a little more energy out of us.  We just couldn’t get it back.”

Plus, the atmosphere did nothing to help the beleaguered Recovery offense. 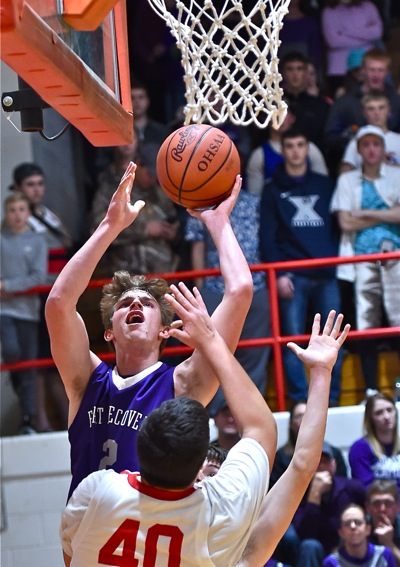 Payton Jutte gets to the rim for two of his team-high 21 points.

“The crowd was great,”  said Rosenbeck.  “With the holidays we really haven’t had our normal St. Henry crowd, but the crowd was awesome tonight.  And Tyler gave ’em a reason to be awesome.”

He’s had some good nights before, in football, surely, and typically in basketball Tyler Schlarman is going to give you a great night’s effort and ten to twelve points.  But he may never have another night like Friday, or top the kind of emotion his performance set off on his way to those 27 points and the 42-point second half turnaround.

“When shots are going down like that you kinda’ get the mentality that you can take over the game,”  he said afterwards, words coming much harder than those six three-pointers and the 27 points.

“I just tried to do my job.  My teammates did their job.  And when Jutte got into foul trouble that was big for us because he’s an absolutely great player.  Caden (Niekamp) was great and our guards did a great job with their defense in the second half…and the shots fell.” 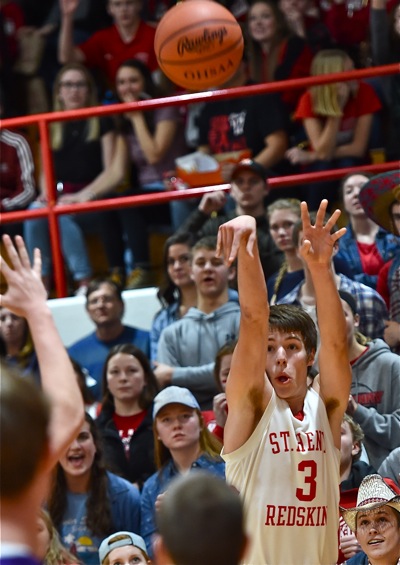 “Their defensive energy – their energy as a whole – picked up, times two,” he added.  “And ours just went away, and that’s frustrating because in each of our games so far we’ve struggled with that in at least one quarter.  Tonight, we just happened to do it while running into someone who was shooting unconscious (Schlarman). Hats off to him, and them.  They earned it.  They didn’t give up when things were bad for them in the first half.”

In a word – and I mean a single word – Schlarman would admit that he’s never had a better night competitively.

“Correct,”  he said simply, uncomfortable with the notion that he’d even done something special.  He might be modest to a fault in that regard, because what he did for the St. Henry Redskins Friday was indeed something to excite the crowd – something for the locals to talk about Saturday morning.

And would he sleep well Friday night, content with his contribution…after such a stirring achievement? 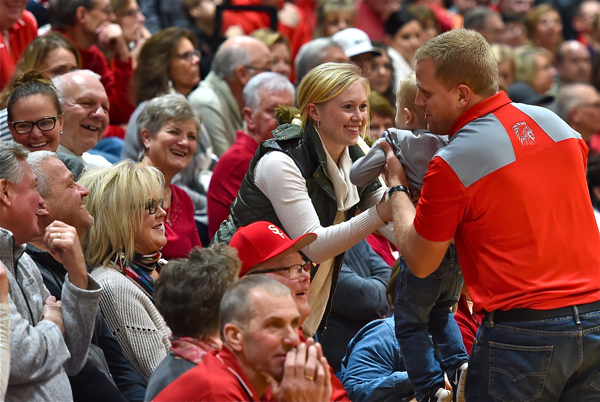 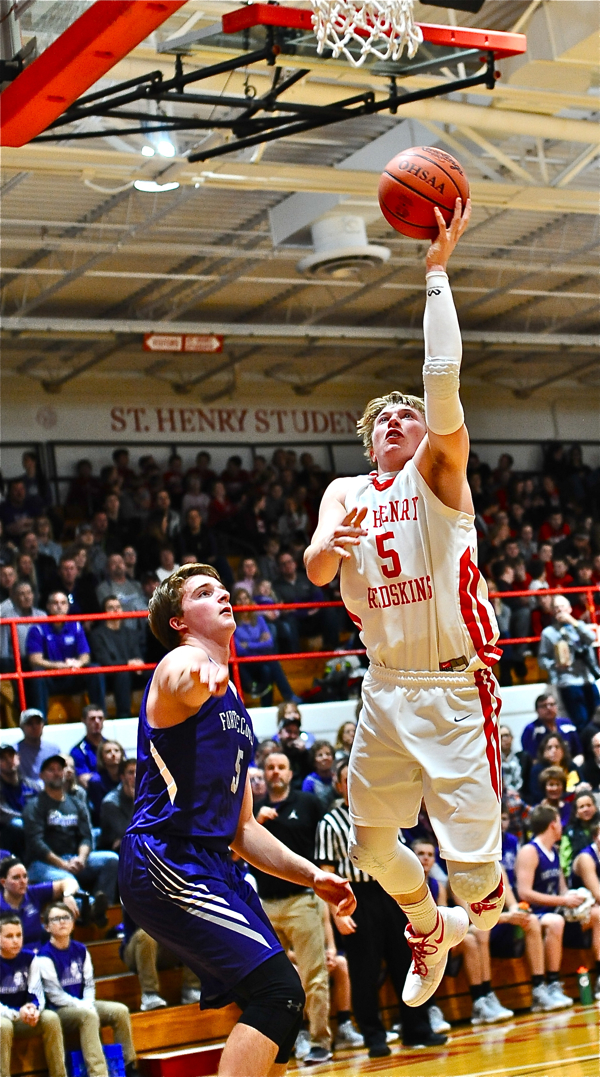 St. Henry's Tyler Schlarman was 6 of 10 from three-point range, and 9 of 16 overall, on his way to a game-high 27 points in the win over Fort Recovery. (Press Pros Feature Photos by Sonny Fulks)