McCoy: Flyers Take A Backward Step In Loss To UMass…

The age-old axiom that best describes this year’s Dayton Flyers?  Their consistency is topped only by their inconsistency.  Flyers fall Saturday to a UMass them they should have beaten.

DAYTON — The best way to describe this season’s model of the University of Dayton basketball team is enigmatic: “Difficult to interpret or understand; mysterious.”

There are day when the Flyers can beat the best of the best, as they did Wednesday night when they pounded St. Bonaventure.

And then there are days when they can’t beat Friar Tuck and four nuns.

That was the case Saturday afternoon when Massachusetts came to town with a 7-and-8 record, 0-and-2 in the Atlantic 10. And those games were before two UMass starters were suspended.

Thus, the Minutemen came to town shorthanded, but played like the longer arm of the law while humbling the Flyers, 62-60.  So whoosh went UD’s 11-game winning streak at home in Atlantic 10 games.

And a couple of the Flyers sensed something was wrong at halftime, even though they still owned a five-point lead.

“Bunkers” is proud to sponsor coverage of Flyers basketball on PressPros Magazine.com.

“We were up 10 and they brought it down to five points and in the lockerroom everybody had their head down, nobody was saying anything,” said Jalen Crutcher after leading the Flyers with 14 points. “It was quiet just because of the way we finished the half.

“Coach (Anthony Grant) told us we needed more energy and asked us, ‘Where is it?’ He was trying to pump us up but we came out for the second half still flat.” 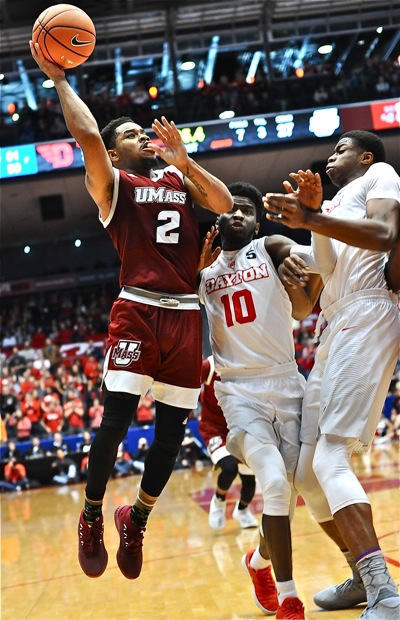 What beat the Flyers? In a word…their inability to keep sophomore point guard Luwane Pipkens away from the rim.

“The things we did Wednesday (against St. Bonaventure) we were not able to duplicate today,” said Grant. “The energy, the effort, the focus was not there. UMass came in and played hungry and very passionate. Their energy was better than ours.

“The end of the first half and the beginning of the second half told the tale,” he said. “We don’t have the margin of error not to show up for 40 minutes. We need the effort, energy and focus. It’s hard right now for us to figure out the buttons that need to be pushed.”

Darrell Davis, who watched from the bench for 11 minutes with foul trouble, hit four straight free throws, the last two with 49 seconds left to pull the Flyers to within two, 62-60.

And there was a scramble for a loose ball under the UMass basket and the call went UD’s way with 19 seconds left. After an officials review that took three minutes, the call was confirmed.

During the review, Grant set up a play for the final possession. The plan was to get the ball low to the big man, Josh Cunningham. It was Cunningham who scored a basket at the horn early this season to beat Ball State.

Cunningham, though, never touched the ball. It went around the perimeter until falling into the hands of Darrell Davis. He drove toward the basket and flung one up off-balance that clunked off the rim and the Flyers were finished, 62-60. 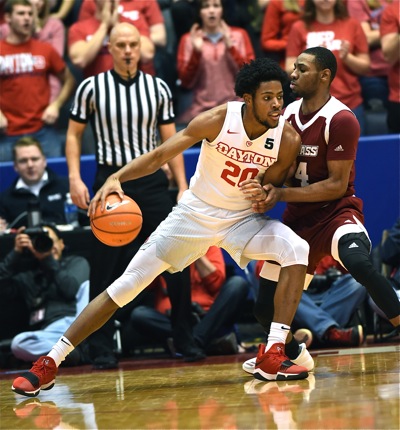 “I had a great underneath out-of-bounds play that I stole from Brad Stevens of the Boston Celtics because I really thought it would be our ball,” said UMass first-yyear coach Matt McCall of the review with 19 seconds left.

“On defense, we couldn’t get sucked in on defense and give up a game-winning three,” said McCall. “Davis is such a good player but I didn’t want to put so much focus on him. We told our guys to stay at home and stay back and make them score over the top of our length.”

Of his team winning in a hostile environment while missing two starters, McCall said, “I’ve been a part of a lot of good teams, a lot victories, but I don’t think I’ve evere been prouder of a group after a game because of the resilience and the fight they showed. We played a freshman for 35 minutes (Carl Pierre, 15 points) for 35 minutes and Pipkins played 37 minutes and we found a way to win.”

McCall called his win over Anthony Grant, “Like coaching against and beating my dad.” McCall was a graduate assistant and Director of Operations at Florida when Grant was an assistant to Billy Donovan.

“I saw how Anthony Grant was as an assistant coach and I learned from him,” McCall added “He taught me about the game and about life. I owe a tremendous amount to him. It’s like playing against your dad. He is going to have this program through the roof in no time. You ask people in this business about him and the one thing they talk about is his character.” 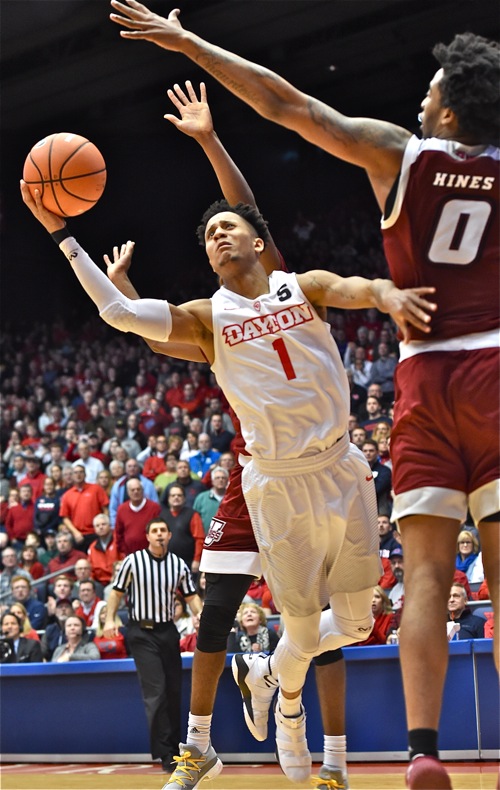 Darrell Williams had a contested look at the rim for the game’s last shot to tie, but his shot came up short.

Of Pipkins and his orchestration of this win, McCall said, “I was hired for this job on March 28 and I’ve seen more change and more growth in Luwane than any other person. His competitive spirts is so through the roof that it took some growing pains with my relationship with him. He and the other kids played for another coach and then I was the second coach they hired and there was some trust that was broken down.”

Pat Kelsey of Winthrop originally accepted the UMass job, but then backed out and the school turned to McCall and lured him away from the University of Chattanooga.

After he look the job, McCall visited Pipkins at his home in Chicago and convinced him that all would be good at UMass.

It was a choice that stabbed UD in the groin Saturday. Pipkins was 9 for 22 from the field, five for five from the foul line and aded four assists.