The two top scorers had a total of 85 points.  Only they were on opposing teams. Xenia’s Samari Curtis had 50, and Tipp’s Caiden Smith’s had 35,  in a thrilling shootout win by the Red Devils.

TIPP CITY — His t-shirt beneath his white dress shirt was drenched and it wasn’t hot in the Pat Wampler Gymnasium Friday night in Tippecanoe High School. 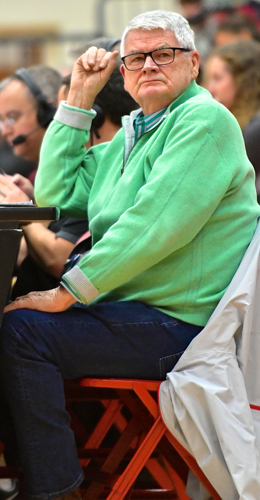 Hall of Famer Hal McCoy returned to the gym to write GWOC basketball for PressPros.

It was pure evidence of how hard personable coach Adam Toohey worked on this frigid night, almost as hard as his scrappy, hard-working players.

And it took a lot of perspiration and breath-catching for Tippecanoe to eradicate Xenia in a Greater Western Ohio Conference basketball game.

That, indeed, was the scenario. Tippecanoe ran over Xenia, 90-80, scoring 56 points in the second half. And the 50? Those were scored by Xenia’s Samari Curtis, Xenia’s 6-foot-4 junior guard disguised as a one-man whirlwind.

“Bunkers” is proud to sponsor coverage of GWOC basketball on staging.pressprosmagazine.com.

What they could have done is cleared the gym and staged a one-on-one game between Curtis and Tippecanoe’s Caiden Smith, a 6-foot-1 senior guard who made the game a two-man whirlwind.

Smith whipped in 35, but there was a major difference. Smith had a heap of help and Curtis had virtually none.

Xenia’s Meechi Harris scored 18 to go with Curtis’ 50 and that’s 68 of the 80 points. No other Buccaneer scored more than three.

On the other side, Smith received three-pronged 15-point help — 15 from 6-foot-3 boy-mountain Noah Bledsoe, 15 from Cade Gingerich and 15 from Dan Hagen.

For the first quarter-and-a-half, the two teams played see-saw on the scoreboard, exchanging leads throughout, until the last three minutes of the first half.

Tipp led, 26-25, and staged an 8-1 dash to the buzzer to take a 34-26 halftime lead. Smith had 16 at the half, but the big push was furnished by Bledsoe. He averages 2.8 points per game, but used his refrigerator-sized bulk to bully in 10 points in the first half, six in the second quarter.

In addition to his 15 points, Bledsoe missed a double-double by one rebound, snagging nine. “Yeah, he is a big boy,” Toohey said with a laugh. “Their guy was so big under the basket (6-foot-7 Norde Ulolo) that he made our big guy look small, which he did.” But Bledsoe stood taller and sturdier, as most refrigerators do.

“Noah doesn’t always play that much because of some of the size of the teams we play,” Toohey added. “Man, tonight he showed up and it was so much fun watching him go and succeed. It is so good to see guys put in so much work and not get rewarded with time. But he was a man tonight. 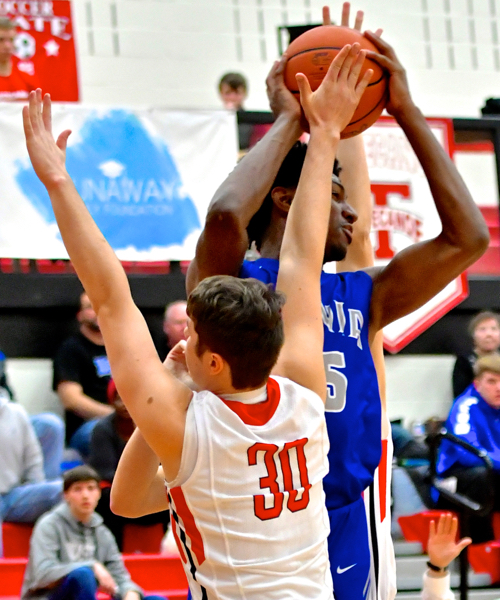 Samari Curtis gets double-teamed by the Red Devils’ defense.

“He is a streak guy,” said Toohey of Hagen. “When he gets hot. . .well, we lost to Sidney when we shot 0 for 19 from three. But you watch us in practice and we’re the best shooting team I’ve been around. In practice sometimes, he’ll hit seven or eight in a row.”

Xenia’s Curtis scored 11 in the third quarter and was helped by Harris with six and Corey Burnette with three, but at period’s end Tipp was up 55-41.

All that was left was for Smith (15) and Curtis (21) to finish their cavalcade of points in the fourth period.

“I didn’t know Curtis had 50; I thought he had 30 or 35,” said Toohey of the Curtis Avalanche. “He’s pretty good. The plan was to shut down everybody else and the plan worked, I guess. We were trying to shut him down. 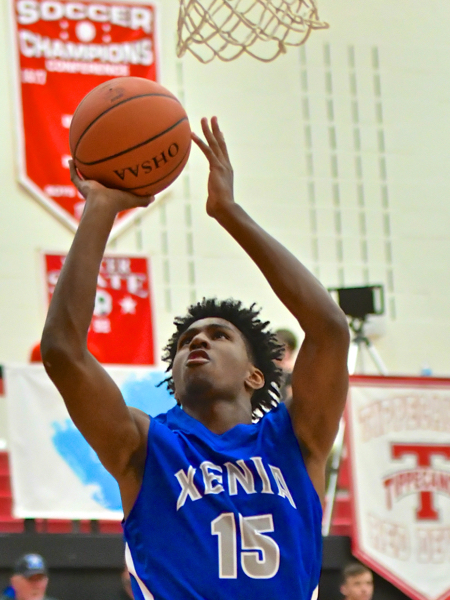 Top scorer of the night Samari Curtis was impressive, scoring a game-high 50 points.

“We thought he could shoot threes elite off the dribble,” Toohey added. “We tried to make him go around us and have him try to finish over us.” That was accomplished, sort of. Curtis was only 3 of 11 from three but he did go around and over for his 50.

Of his own super-scorer, Caiden Smith, Toohey was full of praise for his all-around athlete who also was Tipp’s place kicker on the football team and an all-Midwest soccer player.

“There was one game where he only had seven points, but he had like nine assists, for which he was super excited and I was thrilled for him,” said Toohey. “Some guys just look at those numbers (points).

“He is a great teammates and a special athlete. He was first team all-Midwest striker in soccer and first team all-state field goal kicker. He can do it all. And he loves helping kids.” 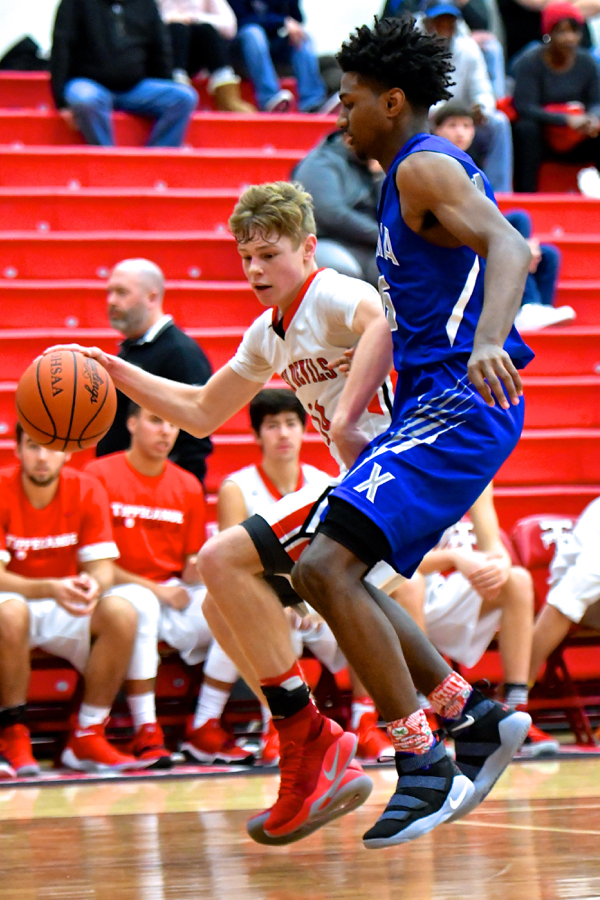 Caiden Smith and Samari Curtis appear to be skipping rope:  They combined to score 85 points. 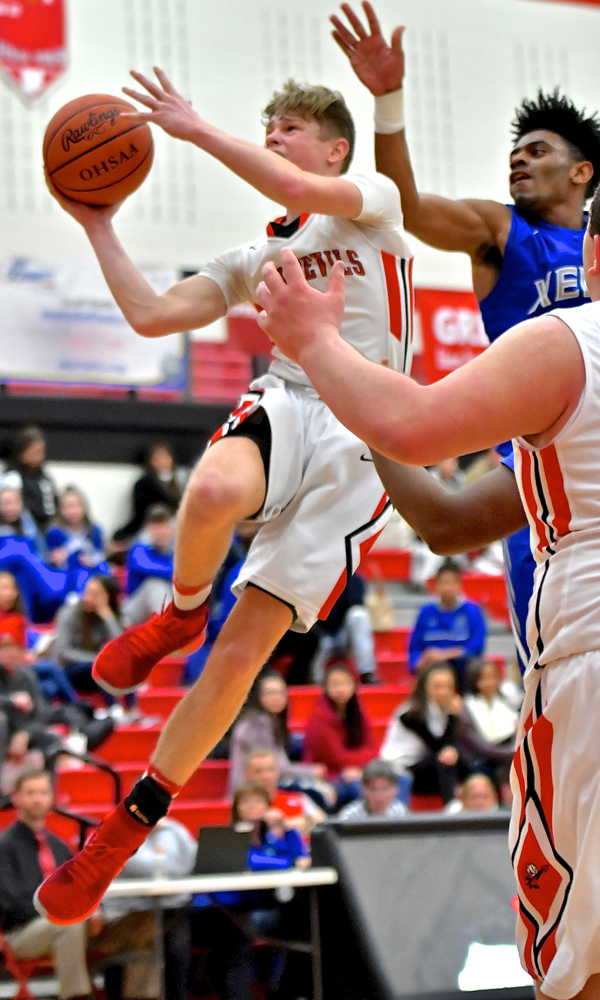