Darrell Davis scored 28 points, a new career high, and the Dayton Flyers used his lead to snap St. Bonaventure’s win streak with an impressive win of their own.

DAYTON — Everybody out there who believed the University of Dayton basketball team would beat St. Bonaventure Wednesday night in UD Arena, raise your hand — put your hand down, Rudy Flyer, you’re prejudiced.

Coach Anthony Grant’s seventh win at Dayton gave him 200 as a college coach.

After losing in Pittsburgh Saturday to Duquesne, the team picked to finish last in the Atlantic 10 this season, it was expected by one-and-all that the Flyers would be thin rugs Wednesday, something for St. Bonaventure to use to clean off the snow and ice from their sneakers.

After all, the Bonnies were picked in the pre-season to win the A10 and had done nothing to disprove it, winning 11 of their first 13 games with wins at Syracuse and Maryland on their resume.

The Bonnies came to Dayton with an eight-game winning streak and a 4-and-0 record on the road.

And that is why they don’t play college basketball games on iPads and do play them on wooden floors.

In a game that probably sent shock waves all over the Atlantic 10 landscape, the Flyers led wire-to-wire and put it to the Bonnies, 82-72. Take that back to the snow drifts of Olean, N.Y.

While it was only new coach Anthony Grant’s seventh win at Dayton against seven losses, it was his 200th career win as a college coach and certainly his biggest and best so far at UD.

Tre’ Landers had his career-best of 17 points on six of eight from the field.

Darrell Davis cleared the path with 28 points (10 for 10 from the free throw line, including six straight in the final 34 seconds to de-ice the victory. And he added seven rebounds, two assists and two steals.

The surprise of the night was probably a shocker to the Bonnies, 6-foot-5 sophomore guard Trey Landers, who did his prepping just up the road in Huber Heights at Wayne High School.

Landers whipped in a career-best 17 points on six of eight from the field and five of six from the foul line to go with five rebounds and four blocked shots that brought down the house.

And he gave his big brother a huge assist. His brother is Robert Landers, Jr., a defensive lineman for The Ohio State University.

They talk nearly every day, including the night after the Flyers lost at lowly Duquesne and it was a pep talk-message.

“He gave me a good view of what he has gone through this year,” said Landers. “He talked about losing tough games to team you had a chance to beat (Oklahoma, Iowa for Ohio State). He told me to forget it and think about the next game and the next play. I didn’t dwell on the Duquesne loss and I felt like I did a decent job tonight.”

Decent? How about remarkable?

“The talk wasn’t about us losing seven games, it was just about losing that last game,” Landers added. “He just put it in the perspective of them losing to Iowa. I just took in all his talk about his experiences.”

In addition to the cold, hard numbers on the statistical sheet, Landers is fast becoming a floor leader, a timeout-in-the-huddle leader and a halftime-locker-room leader.

He was noticeably vociferous on the floor and during timeouts and it is something his coach notices. 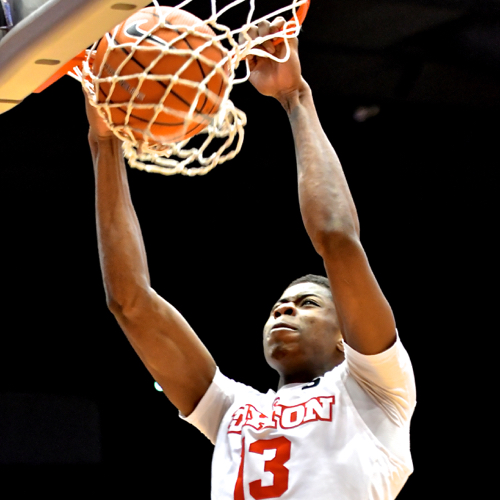 Kostas Antetokounmpo takes one to the rim for two points.

“His hustle plays, his voice, his leadership were contagious for us tonight and our team fed off of it,” Grant added. “At halftime you could hear his voice. He is growing into that role as a leader for us and our guys feed off that.”

Of his take-charge demeanor, Landers shrugged and said, “Being a leader and having a voice — that’s just me.”

And he was part of a defense that shadowed and harassed St. Bonaventure’s high-scoring guard tandem of Jaylen Adams and Matt Mobley. Together they average 38 points a game (20 for Adams and 18 for Mobley). The last time UD saw Adams he scored 35 in UD Arena last year after scoring 29 against the Flyers last year at St. Bonaventure.

Mobley encountered early foul trouble and scored zero in the first half while Adams scored eight, four from the foul line. Mobley was 0 for 4 and Adams was 2 for 4. That enabled the Flyers to build a 39-24 halftime lead behind 14 points by Davis and 12 by Landers. 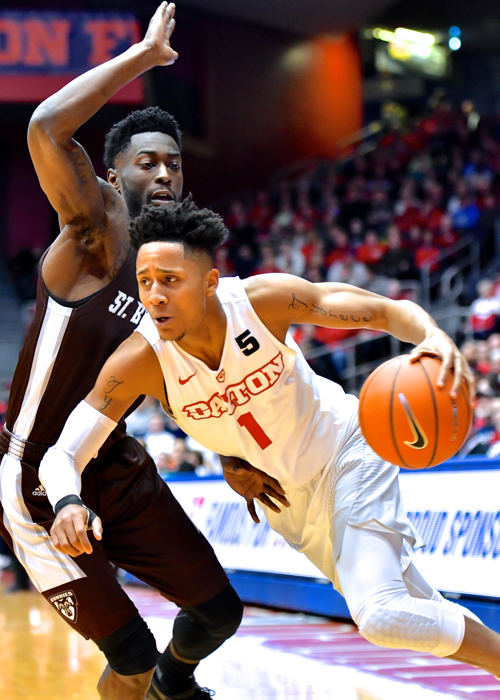 Darrell Davis drives past a Bonaventure player on his way to a career-high 28 points.

The Bonnies came into the game shooting 40 per cent from three-point real estate but the Flyers held them to 32 per cent — 8 for 25 after going 0 for 7 in the first half.

“We applied pressure on Adams and Mobley and mixed our defense up between man and zone,” said Grant. “Our guys did a really good job of understanding our defensive game plan. Those guys are really good, really good scorers. For the most part, we made those guys work for what they got. They didn’t get a lot of easy baskets.”

Asked if scoring a major upset after losing to a team the Flyers should have beaten lifts the spirits and displays what this team can do, Grant said. “If there was a lesson learned (from the Duquesne loss) it was that we need everybody to be locked in on the same page and when we do that we are capable of beating anybody on our schedule.

“It is my hope that you learn lessons throughout the year and the plan it to develop consistency and continue to get better,” he added. “We got better tonight and winning aside we came out better as a team tonight and had one purpose — put us in position to be able to have the success that we had. That’s the approach we had tonight and if we do that every night we have a chance to win every game.”

The Flyers get a chance to check their consistency pulse Saturday at noon in UD Arena against Massachusett, a team that is 7-and-8 and lost to St. Bonaventure by 20 and also lost to Georgia State, a team the Flyers beat in overtime. 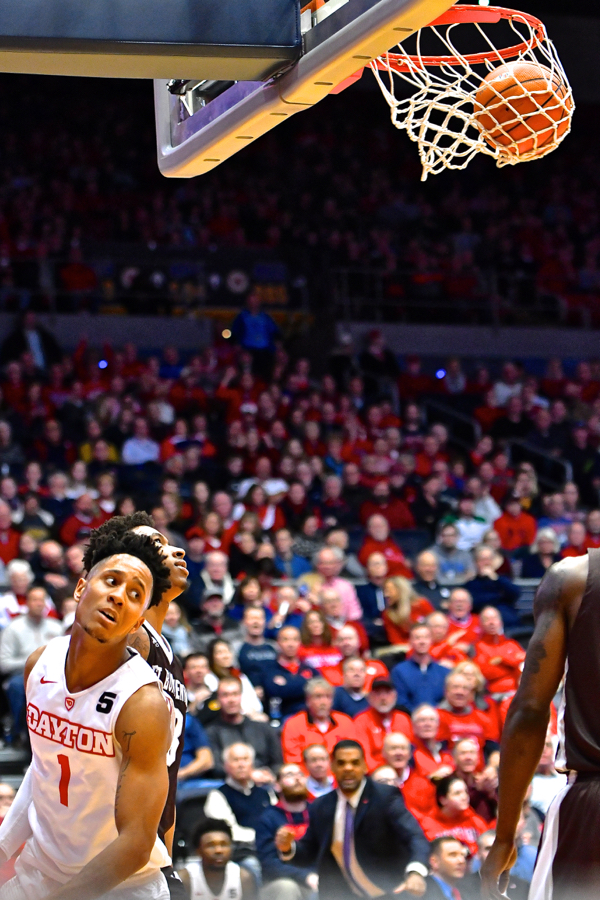 Darrell Davis adds two more to his total with a second half layup. 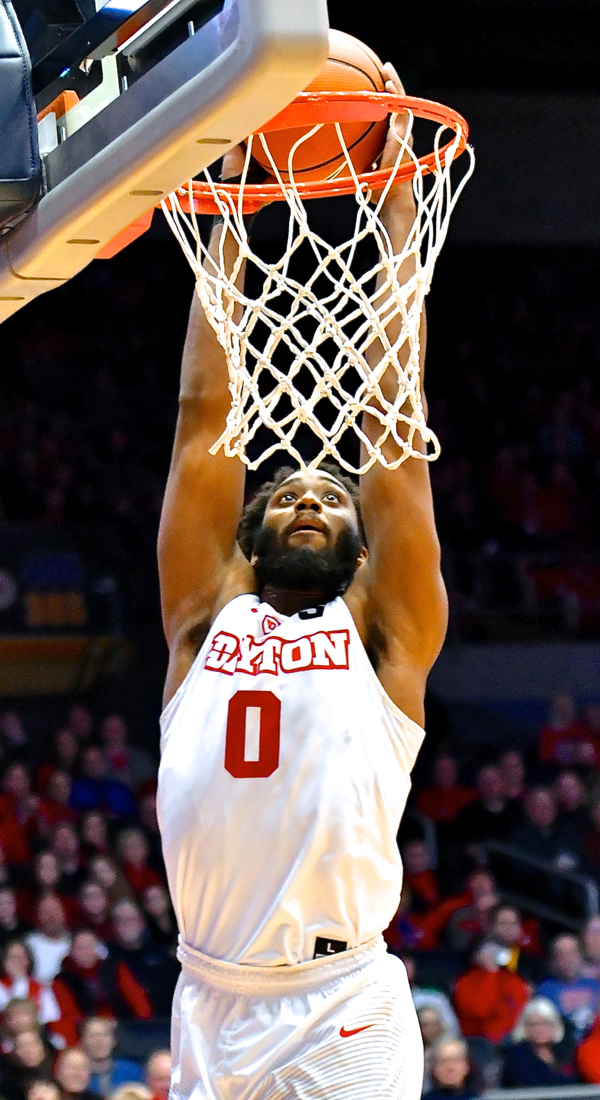 Josh Cunningham puts on an impressive show by slamming down a dunk to punctuate the win. (Press Pros Feature Photos By Julie McMaken Wright)