Eye Of The Tiger: A Stocking Stuffer For Versailles….

Brilliant at times, reckless at others, it featured two of the best individual performances of the 2017-18 season.  And in the end…a well-earned and competitive win for Versailles over the rapidly improving Tipp Red Devils.

Versailles – Hear me out.  It was a far better basketball game than the 77-63 final score might indicate.

A game in which the Tipp Red Devils (4-3) never led, and trailed by double digits as many as three times, Adam Toohey’s club simply wouldn’t quit, or even get discouraged. 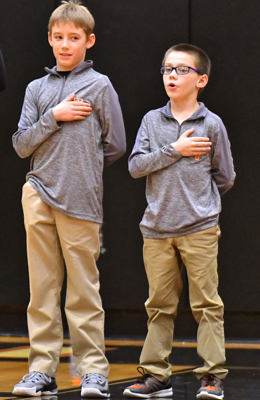 It was a game that saw Ohio State recruit Justin Ahrens strafe the Red Devils for 20 points in the first half, and finish with 36 for the game.

But, it was also a game that saw Tipp’s Caiden Smith score 6 points in the first half, then can four three-pointers from long, long range in the second half to cut the Versailles margin to as few as five points.  Smith would finish with 29 points.

It was a game that saw undefeated Versailles (6-0) play brilliantly at times, then regress to committing eight turnovers while scoring four points in one four-minute stretch in the second half.

Zach Losey latched on to Justin Ahrens in the second half, but Ahrens gets two of his game high 36 points.

It was a game of great shooting at times, and wild flings at the rim at others.  Versailles would shoot a bit over 50%;  and Tipp, after a horrible start, closed in on a respectable percentage by game’s end, at 42%.

In short, it was a game that was highly entertaining for the fans, while both coaches admitted afterwards that it was exactly the kind of challenge their teams needed to get better for January.

“It was an up-and-down game,”  said Versailles’ Travis Swank.  “We knew they would score a lot of points and it was the kind of game that was good for us to see.  We know we’re going to see that later down the road.  I don’t like giving up that many points, but they had a lot of skilled players out there.  The Smith kid and the Sauls kid are both very nice players.  It was a lot of fun to play tonight because you had a lot of good players making quality shots.”

Justin Ahrens was one of them, as noted, hitting four three-pointers in the first eight minutes on his way to a 16-point quarter.

“Actually, we wanted him to take some of the shots he took tonight,”  said Toohey of Ahrens.  “But when you’re as good as he is sometimes he’s going to make those shots.”

Versailles led 27-14 at the end of one quarter, thanks to Ahrens.

But Tipp had five different players score two or more buckets in the second to best the Tigers, 17-11, and trailed 38-31 at the half.

Versailles came out scorching in the third, going on a 10-2 run to stretch the lead back to double digits.

But someone forgot to take note of Caiden Smith, one of the GWOC’s best place-kickers in football…as well as one of the league’s streakiest long-range bombers in basketball.  In a span of four minutes he personally shot the Red Devils back into the game with four consecutive three-pointers, cutting the deficit back down to single digits.

Caiden Smith struck for four consecutive three-pointers in the second half to cut the Versailles margin to single digits.

In the meantime Adam Toohey found someone committed enough, and physical enough, to slow down Ahrens.  Zach Losey latched on to him like barnacles on the bottom of a boat, restricting the Tigers’ leading scorer to just four points for the first ten minutes of the second half.

But the trouble was…Ahrens’ twin brother, A.J., would become a beneficiary of the Red Devils’ preoccupation with stopping his taller, left-handed sibling.  He scored 10 of his game total of 16 points in the fourth quarter to once again expand the lead out to double figures, and ultimately, the 77-63 finishing margin.

“There’s no question Justin was more challenged in the second half,”  said Swank.  “And he forced some shots.  But he’s so good at making his own shots that you take the good with the bad sometimes.  But he helps our team go and tonight we got a lot of points from a lot of different players, and A.J. was one of them.  He can score in multiple ways and had those 10 points in the fourth quarter.”

Overall, Ahrens led all scorers with his 36, A.J. Ahrens had 16, Kyle Jones had 7, Noah Richard had 6, and Keaton McEldowney, Mike Stammen, and Evan Hiestand each finished with 4 points apiece.

For Tipp, Smith’s 29 was team high, while Ben Sauls had 12, Dan Hagen had 7, Cade Gingerich had 5, Josh Wildermuth and Noah Bledsoe had 4 each, and Losey, who spent much of the night harassing Justin Ahrens, had 2.

“It was exciting to hit those threes,”  said Smith of his second half outburst, and 17 points in the fourth quarter.  “It made me want to win even more.  I think it helped rally our team.  As soon as I would hit a three we pressured them and we got a bunch of turnovers off of that.” 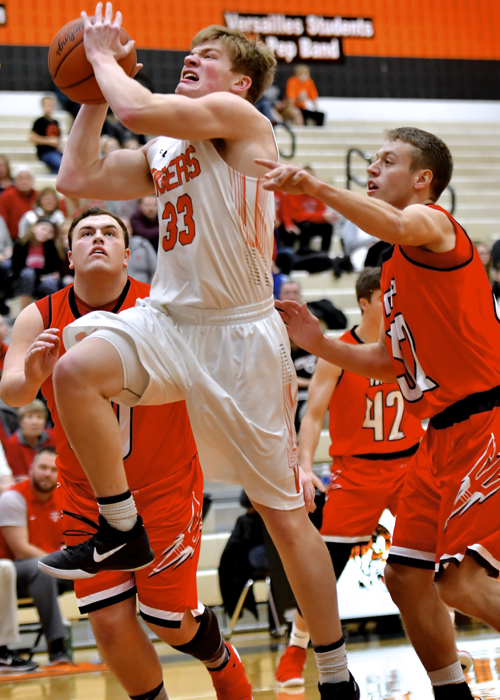 A.J. Ahrens drives to the rim in the Tigers 38-point first half.

But it wasn’t enough.  Tipp falls to 4-3 through seven games, even though Toohey called it a valuable learning experience.

“It absolutely was,”  he noted.  “We just talked about it in the locker room.  We’ve scrimmaged Wayne, we played these guys tonight, and this is what it’s about.  They’ve got a great player here (Ahrens), and he and Andre Gordon (Sidney) are two of the best I’ve seen while coaching in this region over the last eight years.  They’re a great team and #33 (the other Ahrens) is another great player because he can rebound and play defense.  He’s tough.  They’re good, they’re well-coached, and they know what to do.”

“We had seen them on tape and knew that they were capable of scoring like that,”  said Swank. “Like I said, I don’t like to give up that many points, but that’s a style that we’re probably going to see later on in the season.”

So, a stocking stuffer for the Tigers, who will settle down for a few days to consider their unblemished start, as well as the meat of their schedule come January and the new year.

As for Adam Toohey and Tipp, take it for what it is – they’re a much better basketball team than their 4-3 record would indicate.

“We’ve dropped a couple of games because we didn’t shoot well against Sidney and we just didn’t have a great effort against Troy,”  admitted Caiden Smith.  “But we should do well for the rest of the year.”

A little optimism, in other words, for both teams.  And isn’t that what the season – Christmas, not basketball – is all about? 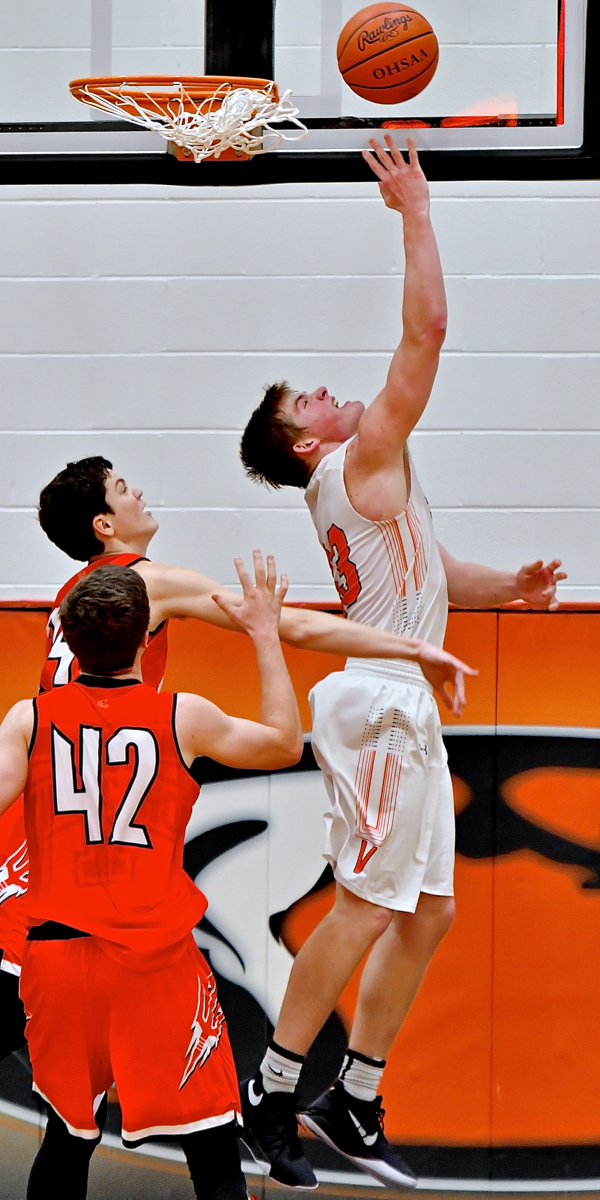 A.J. Ahrens scores two of his 16 points on a reverse baseline layup. 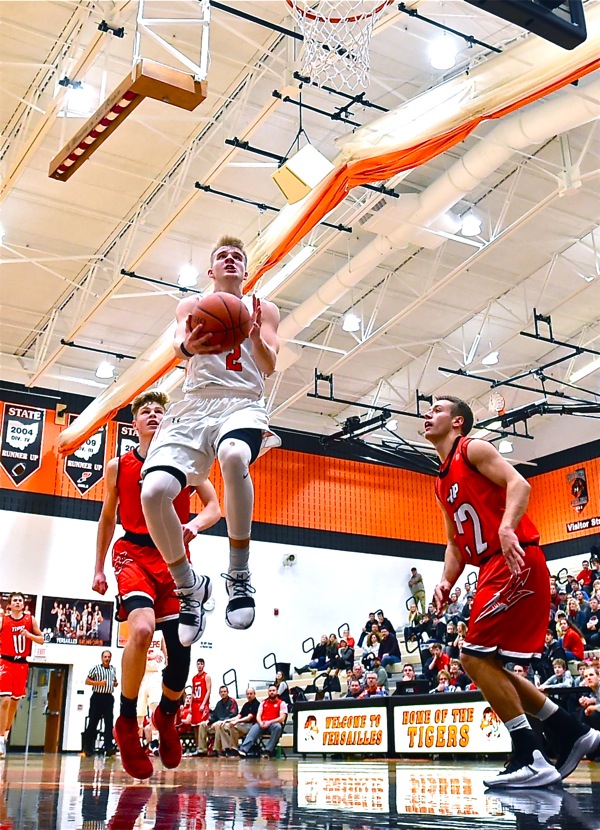