The Vandalia Butler Aviators started hot and finished hotter in thumping Troy for its fifth straight win, the Aviators best start in 14 years.

Troy—The high school basketball season is less than a month old, but one of the biggest surprises thus far has been the play of the Vandalia Butler Aviators.

Led by a defense that allowed just 36 points through the first four games, the Aviators arrived at the Trojan Activity Center Friday night looking for their fifth straight win and their best start to a season since December of 2003.

The 2-1 Trojans barely knew what hit them.

Braedon Norman made two threes in the opening quarter, Bryant Johnson threw down a pair of one handed dunks, and that defense forced 8 Troy turnovers in rolling to a 24-7 lead after a quarter. Troy managed to chip away at the lead, but Butler regained control midway through the third quarter and soared to a 68-42 GWOC American North win.

“We start with our defense,” said Butler head coach Darren Wyrick. “We stress that all the time, and really set the tempo with that tonight. We had effort, and we executed well, and I thought our defense was very impressive.”

“We were soft in the first half,” said an obviously disappointed Troy coach Paul Bremigan. “They went after it. They got away with everything you can get away with and beat us to the ball. We have got to get it through to these kids that you have to play hard every time you step onto the court. That didn’t happen tonight.” 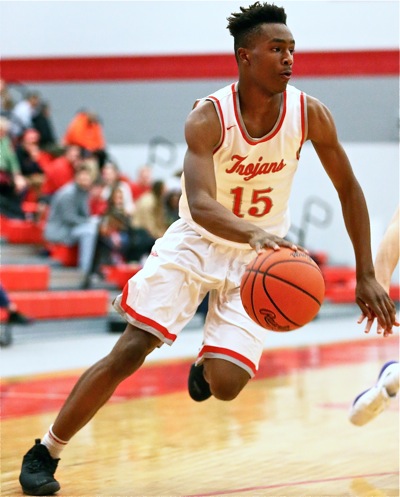 Troy senior Zach Reichelfderfer got Troy off to a quick start, scoring in the opening 30 seconds, but after that, it was all Butler. Vandalia scored the next 12 points and 20 of the next 23 in seizing control of the game almost from the outset.

Butler opened the second quarter on a 7-2 run to widen the advantage to 31-9 before the Trojans decided there was a game going on. Eli Palmer nailed a pair of threes and Chris Demeo and Cole Brogan also scored from deep as Troy closed the half on a 14-4 run to trail 35-23 at the break.

“We started out hot shooting the ball from the perimeter,” Wyrick explained. “Then we hit a little lull because the shots that we were making stopped going in. We picked it up again late. Troy is a good team, very well coached. This is an awesome team win for us.”

Troy’s momentum continued early in the second half,as the Trojans narrowed the gap to 40-33 on the second Jacob Martinez three of the quarter. That is as far as it went, however. Butler closed the quarter on a 9-2 run, then scored the first 6 points of the fourth quarter to end all thoughts of a Troy comeback.

“The big difference between our team this year and last (Butler was 13-11 a year ago) is that we can handle that adversity,” Wyrick explained. “We know we can come back after bad things happen, and that’s great for our program.”

Senior Kort Justice led the way for Butler with 17 points, while Norman finished with 14 and Michael Kreill added 10. Martinez, 6-2 junior who picked up his third foul in the opening seconds of the second quarter, scored all 13 of his points in the second half to lead Troy.

“Jacob played well,” Bremigan praised. “He got into foul trouble in the first half, but came in during the third quarter and gave us a chance.

“We have to get everyone on this team to commit to playing hard, and that’s not happening right now. I’m as surprised as anybody because I thought this group would always play hard. You have to give a good effort whenever you get the chance. Tuesday against Sidney (a 64-53 Troy loss) we were getting on the floor after loose balls and hitting the boards. Tonight was not good.  When you put that jersey on, it’s a privilege. You have to play hard all the time.” 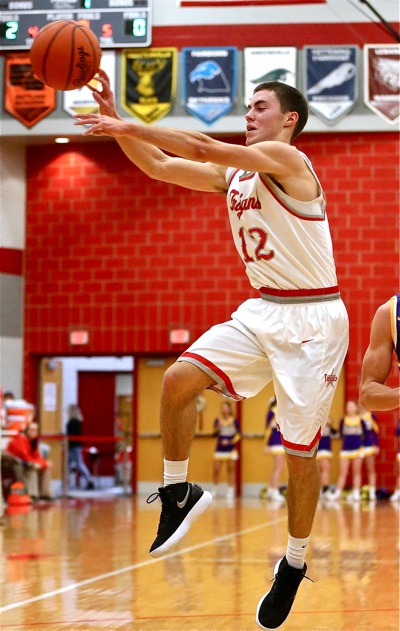 Troy’s Cole Brogan looks for an open teammate to ignite a second half comeback.

Butler controlled the glass 25-18, with an 11-5 edge in offensive boards, while the Trojans were their own worst enemies all night, throwing the ball away 21 times to just 7 miscues for the Aviators.

“We turned the ball over a couple of times when the lead was just 7,” Bremigan said, shaking his head. “We had a kid go in for a layup and get clobbered, and nothing was called. Then we had a couple of more turnovers, they hit some shots, and they next thing you know, its 16 again.”

Justice, a 6-1 senior, entered the game as Butler’s leading scorer. He said hard work has been the reason for the Aviators early success.

“We really get after it in practice every day. We work lot harder than some people think we do. There is a lot of energy every day and we are just having fun. We want to get better every day and it shows with the way we play.

“Our defense really set the tone for us tonight. Coach told me before the game that he wanted me to be more physical. Sometimes I am not the most physical guy, but it really worked tonight. Too be 5-0 is a great feeling, and we just want to keep things going.”

“We thought we would be a very good team this year, because no one worked harder over the summer than these guys. We had young guys last year, so we had a good core returning. They worked tirelessly in the off season and they are reaping the benefits of that work now.

“Being 5-0 is awesome, and it’s great for our school. You know, we haven’t had much success basketball-wise in quite a while, and there is definitely a buzz in our building. Everyone is excited, and we just want to keep that feeling going.” 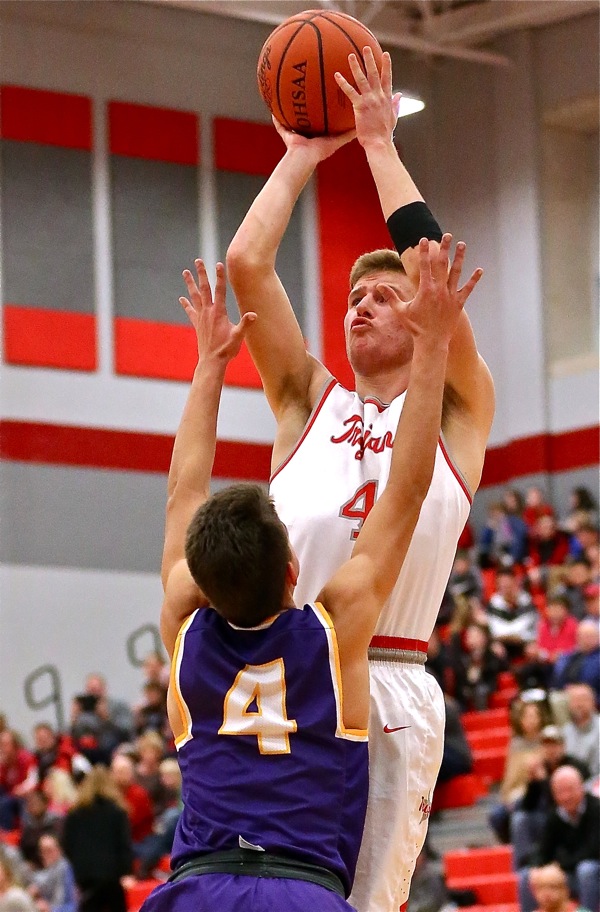