The only drama amounted to the way the bench played.  Danielle Kunk and Caitlin McEldowney shot out the lights and the New Bremen Cardinals to keep top-ranked Versailles unbeaten.

Versailles –  It started out fine.  Great in fact.

New Bremen’s Paige Jones canned a three-pointer for the first points of the game, and for the first five minutes of the first quarter Thursday night it appeared that there would be a basketball game between two of the MAC’s unbeatens, Bremen (5-0) and the Versailles Tigers.

Versailles coach Jacki Stonebraker inserted substitutes Caitlin McEldowney and Danielle Kunk at that point and the two proceeded to hit five three-pointers to stretch the first quarter lead to 10 (20-10) and the halftime lead to 16 (33-17)…and from that point a lot of Christmas shopping lists were seen being studied the rest of the way by partisans of both teams.  Game, set, and match…it was over.

Versailles (8-0) eventually went on to win, 58-29, and like so many are anticipating between now and the beginning of the post-season tournament…they made it look easy!

“They’re really a good team,”  said Cardinal coach Chris Burden, post-game.  “We got off to a good start, but they got off to a better start shooting the threes the way they did in the first quarter.  We took away the McEldowney girl (Kami) and limited the Winner girl there (Danielle), and tried to make other players make shots.  And they did.”

And, that pretty well summed it up.  McEldowney (Caitlin) and Kunk would hit six three-pointers for the game – and combine to score 22 points between them.  Do the math and that pretty much made up the 29-point winning margin. 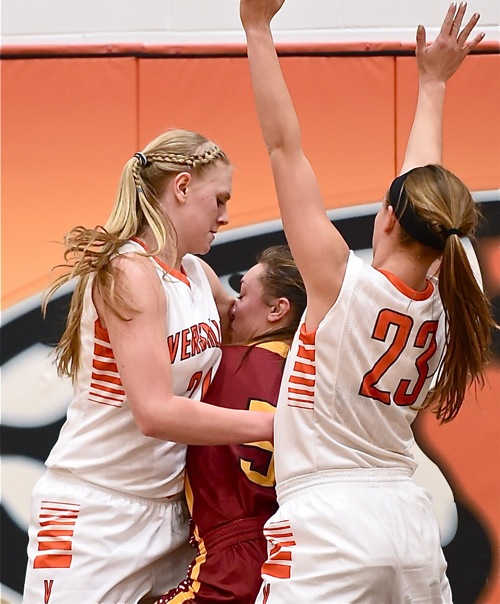 This is a talented team, and no surprise.  After losing last year’s Division III state final game to Gilmour Academy by a mere two points most people in the area – and a lot of people in the state – are conceding that a team with four returning starters Danielle Winner, Kami McEldowney, Elizabeth Ording, and Liz Watren, along with experienced bench players like Ellen Peters and Lindsey Winner, are going to pick up where they left off (two points short) a year ago.

“It’s really early to talk about things like that,”  said Jacki Stonebraker after Thursday’s game.  “I’ve never looked at the end at this point of the season.  It’s so far off at this point, there’s so many games, and so many things to do, it’s not even a focus right now.  We’re taking every game we play and say, OK, this is what we learned from this game.  There no ‘we’re going to do this at the end of the year’, because you never know.”

What she learned from Thursday’s game was…when your star guard isn’t scoring (Kami McEldowney) there’s firepower behind her to come in and take up the slack.

“You’re pretty high-powered when you can girls like Danielle and Caitlin in and have them hit those shots,” added Stonebraker.  “Kami just couldn’t find the rim tonight.  Shots wouldn’t fall for her, and that’s OK.  Good shooters come out of that, come out of slumps, and they’ll be back for the next game.

“Our posts did a nice job.  I thought Lindsey did a great job in the first half, and in the second half her shots didn’t fall.  So somebody picked her up, and that’s what a true team does and I really feel like we have a good group of players that pick each other up.” 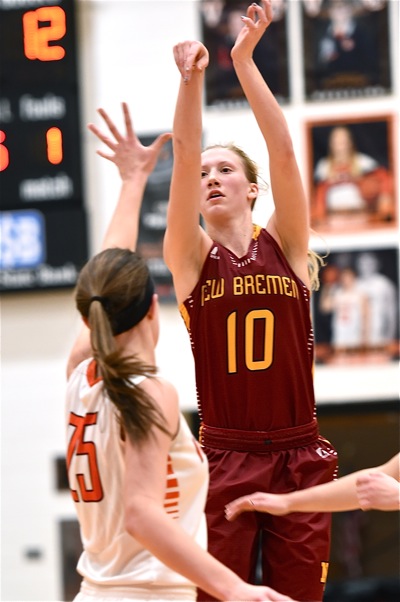 All-State volleyball star Paige Jones (#10) got the Cardinals off to a fast start with a made three-pointer.

Stonebraker is right, of course.  It IS early to talk about what might come at the end of the year.  But still, the polls will be persistent, and those paid to write are going to continue to put two and two together, while putting the proverbial ‘favorites’ bullseye squarely on the back of her Tigers.  In the meantime, her only concession is that there’s plenty of challenge in the MAC with Minster, Marion Local and Fort Recovery (among others) to challenge and make them respectful of the road ahead.

“It’s a mentality that we have to go into every game knowing that we have to play.  I challenged the girls today to out-rebound Bremen by 12, and it didn’t happen.  So the next game we have to set another goal and approach every game on the schedule with a mentality that any team can beat you on a given night if we have an off night.  Tonight if this team had hit some more threes you have a close ballgame.  And that mentality of being ready to play every game is what I love about playing our schedule.”

The numbers….Versailles and Stonebraker enjoyed the luxury of four players in double figures – Kunk, Caitlin McEldowney, and Danielle Winner with 11 points each, while Lindsey Winner finished with 10.  Liz Ording added 4, Ellen Peters had 3, and Kami McEldowney, Kelsey Custenborder and Mallory Marshall had 2 each.

For New Bremen…eight players, in all, scored, led by Paige Jones with 9, Molly Smith with 5, and Macy Puthoff, Hannah Tenkman, Kelly Naylor, and Jane Homan with 3 each.

Versailles looks to extend their early win streak to nine and keep their record clean with a road same Saturday at Lima Bath;  while the now 5-1 New Bremen Cardinals gets some time off before taking on Upper Scioto Valley next week, likewise on the road. 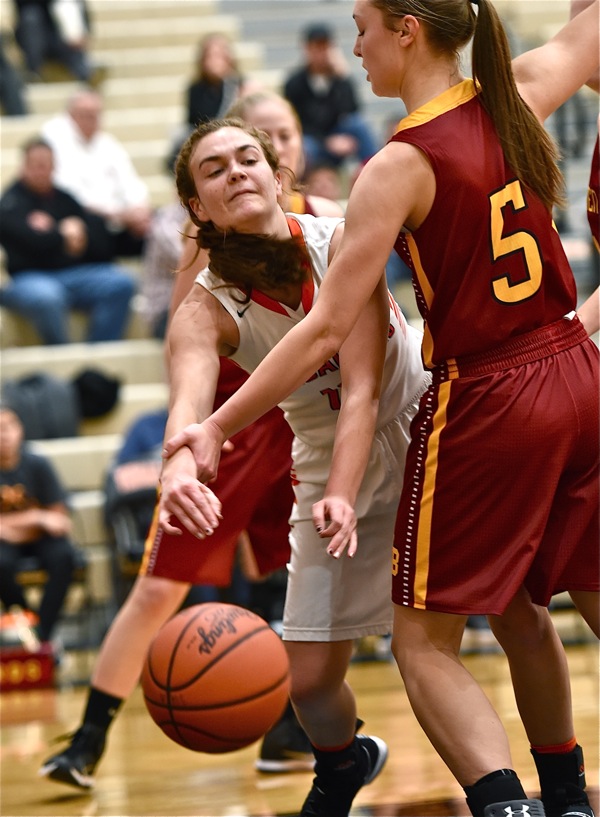 Her shot didn’t fall, but as is her custom Kami McEldowney found plenty of other open shooters for the Tigers. 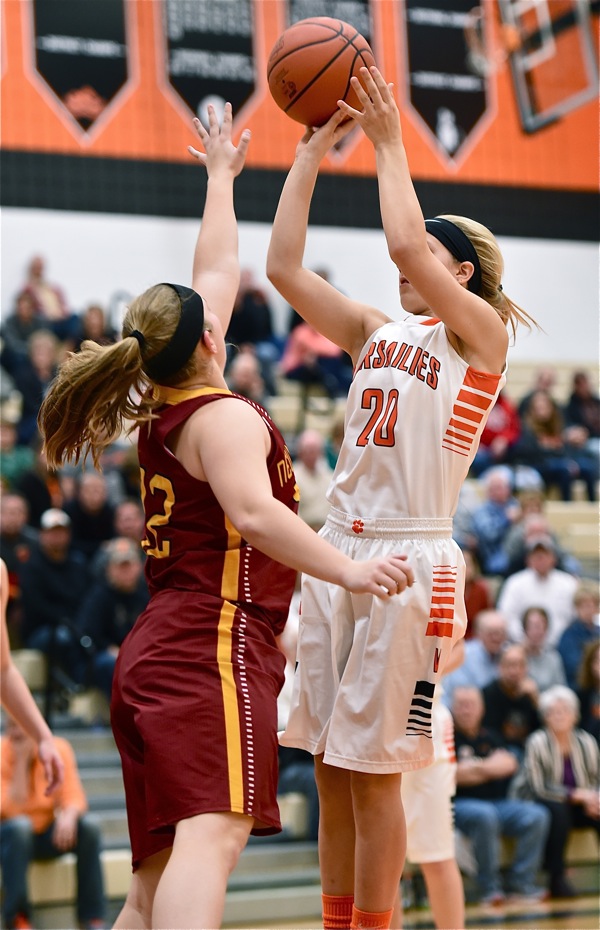 Caitlin McEldowney and Danielle Kunk (#20, above), combined for six made three-pointers to power Versailles to a 29-point win over New Bremen. (Press Pros Feature Photos by Sonny Fulks)