The Flyers game lacked in zone defense while Penn’s sharp-shooters stuck it in the shredder.  Not out-smarted, but outplayed, UD falls to Ivy League Penn.

Well, after Saturday afternoon in UD Arena, the Flyers are now 13-and-1 against the sacred Halls of Ivy. A proud and pesky University of Pennsylvania aggregation went about their business like top students in the institution’s Wharton School of Business.

The Quakers took the Flyers to school, schooled them on perseverance, preparedness and dogged determination en route to a 78-70 victory.

And UD’s new head coach, Anthony Grant, promised he would lay his head on a pillow Saturday night and go to sleep, if he could, blaming himself for the loss.

“The last couple of days you could see this coming with the way we approached it,” said Grant. “We have exams coming up, a lot going on, but I have a saying I tell the players, ‘We have to be where our feet are.’ We have to be present, in the moment, because we can’t get it back. There are no do-overs.”

The Flyers began the game in a lackadaisical zone defense and Penn’s sharp-shooters stuck it in the shredder and bolted to a 21-7 lead in the first eight minutes.

It stayed close from there and at halftime they were tied, 35-all and the stat sheet was a two-way mirror — nearly everything was similar. UD had 14 field goals, Penn had 13. UD was 6 for 14 from three, Penn was 8 for 14. Both teams were 1-for-1 from the foul line. Both teams had 14 rebounds and both teams had four offensive rebounds. UD had 10 assists, Penn had nine. Penn had seven turnovers, UD had six. Both teams had one steal. 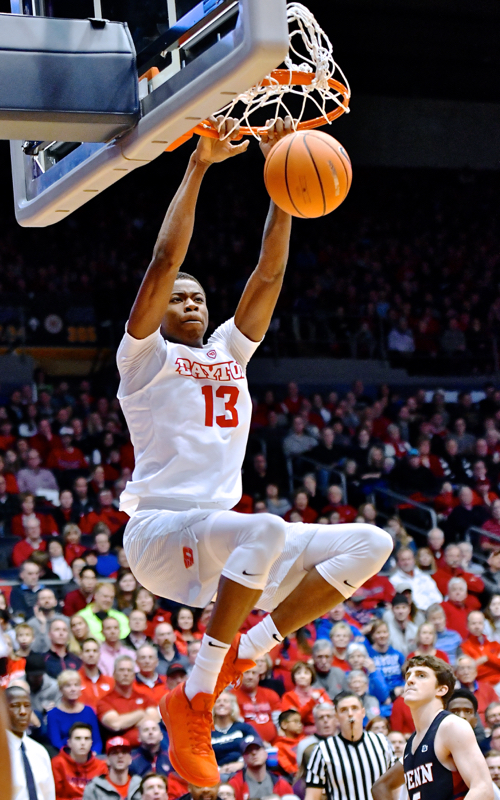 Kostas Antetokounmpo hangs in the game for 16 minutes putting up 7 points and four rebounds.

It was a wash, a standoff and it was who was going to blink first. The Flyers blinked.

It stayed tight for most of the second half until it was Penn 65, UD 63 with 3 1/2 minutes left. A couple of careless turnovers by John Crosby and Darrell Davis put the Flyers in a cavern they couldn’t escape.

It started with a three by off-the-bench senior Sam Jones. And the Flyers trailed 70-65 with 1:22 when Crosby made his errant pass. From there the Quakers made 8 of 10 free throws to put it away. Jones hit two threes in the final 3:12 minutes and was 5 for 6 from three-point acreage for 15 points in 13 minutes. 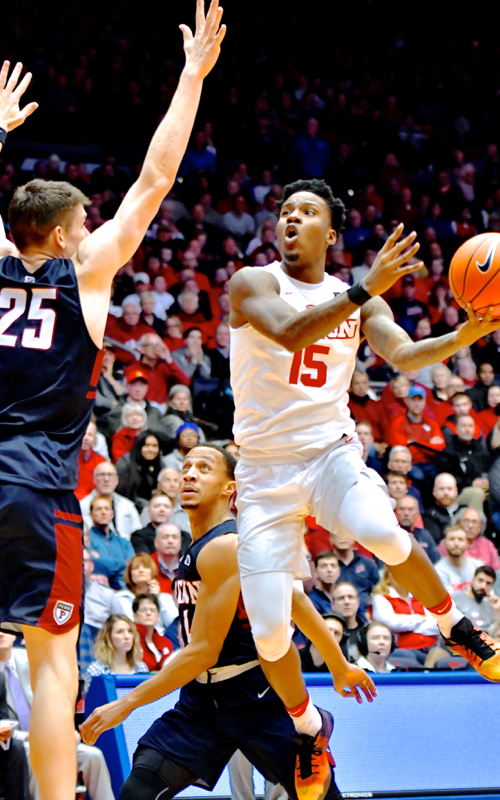 John Crosby came off the bench to score 15 points in 25 minutes.

And don’t put this loss on Crosby’s shoulders. Without him on this day it would have been worse. He began the season as the starting point guard, but lost the spot a few games ago. But on Saturday he came off the bench to score 15 points in 25 minutes. The Flyers scored only five points in the final two minutes, all five by Crosby.

The only other Flyer in double figures was Josh Cunningham, who was nine-for-nine from the field en route to 21 points. Amazingly, over his last three games Cunningham is 22 for 23 from the field.

That, though, didn’t give him a pass from Grant’s disappointment.

“Yes, he was 9-for-9, but how long was the ball in his hands?” Grant asked. “You have to be able to do the other things that impact winning (defense, rebounding). He was the beneficiary of a teammate making a play for him on a lot of those baskets. There are things you have to do on a consistent basis to impact winning games.

“That’s not only in games, that’s in practice and your mental preparation,” Grant added. “You have to show maturity every single day. You have to be able to do those things to reach your potential, to take your craft to a high level.”

Grant aimed credit to Penn for coming into the Arena and yanking the game away from the Flyers, but he certainly wasn’t happy about it.

“There is an expectation that I have for our program, a standard that we have to aspire to and hold ourselves accountable to,” he said. “We haven’t met that. We haven’t even played .500 basketball (4-and-5). That’s not what this program is about and it is not what I aspire to do.

“We have to lot of maturing and growth to do and this was a tough lesson for us today,” he added. “As a coach, I have to take responsibility because that’s my job, to make sure we are prepared. Based on what I saw for 40 minutes today, I have to do a better job with our group.” 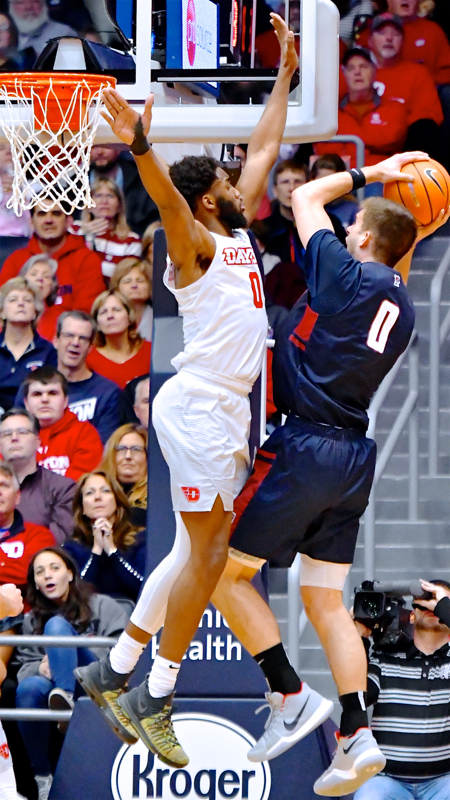 Josh Cunningham was nine for nine from the field with 8 rebounds.

It was an off day for leading scorer Darrell Davis (19.2 ppg). He made only 2 of 9 and was 1 for 7 from three for five points. Kostas Antetokounmpo was 3 for 6 with four rebounds in only 16 minutes of activity.

Crosby was the only burning bulb and even he said, “I don’t think I had a good game.” Based on the others, though, his 7 of 13 shooting and 15 points lit up the building for the Flyers.

About his loss of a starting spot, Crosby said, “I just stayed in the gym and worked. I know it is a long season. I’ve been through this the last two years and when my opportunity comes I’ll be ready for it. We’re just trying to figure out ways to win and I’m on board, whatever coach decides, I’m going to ride with it. I’m all about faith and there is something down the road that is the reason we are going through this.”

Crosby carries a tattoo on his right forearms that reads, “The man who reached the top of the mountain didn’t fall there.” He has had it four or five years. He found the quote on the wall of the rec center in Baltimore where he grew up playing and learning the game.

“I’m always going to remember that and I know we have a long way to go, but we just have to keep climbing,” said Crosby. 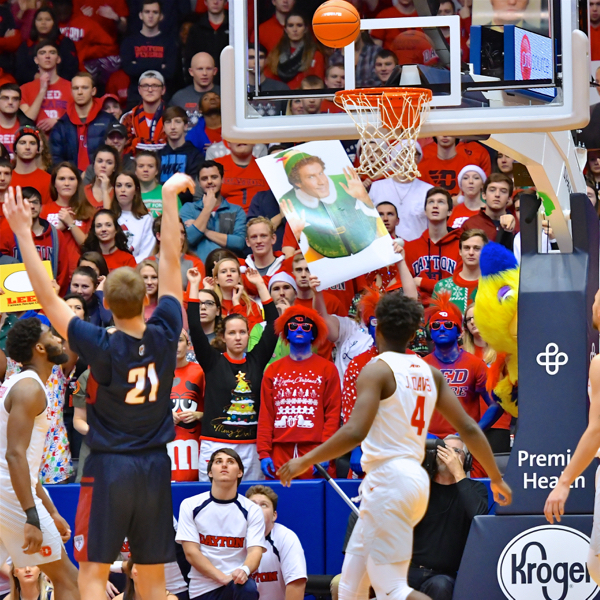 Far from being distracted on their free throw shooting, the Quakers averaged at 72% from the line. 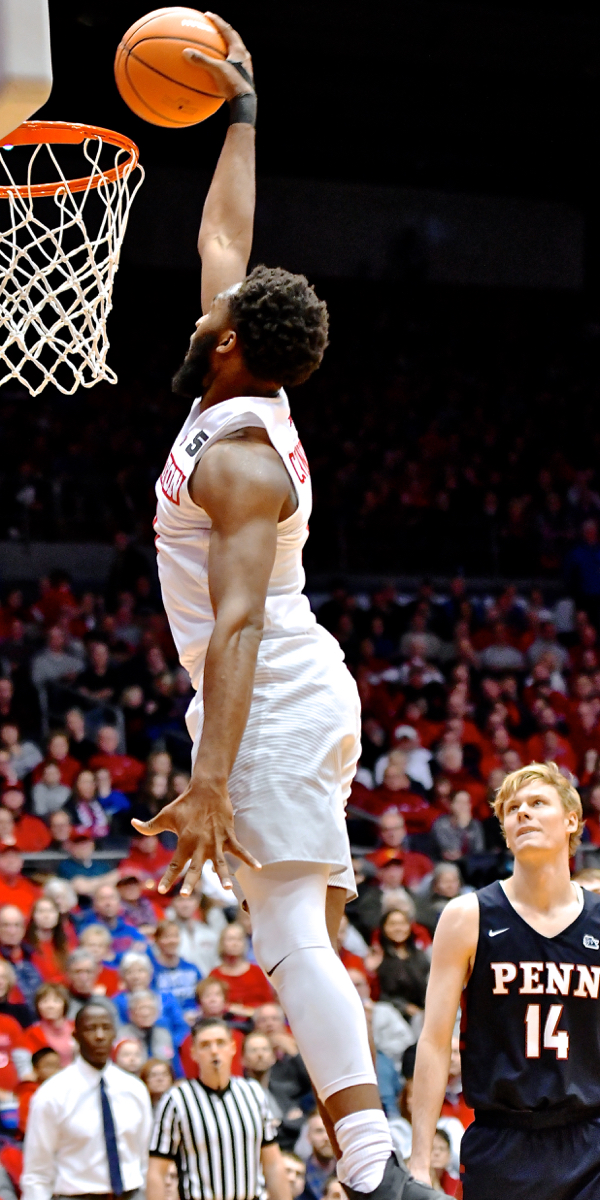 Watched by many, Josh Cunningham takes it to the rim for a game high of 21 points. (Press Pros Feature Photos By Julie McMaken Wright)