Hal: Flyers Keep Kostas Off The Bench, And Waltz Over Tennessee Tech

The Flyers had five players in double figures, and Kostas Antetokounmpo didn’t foul out – a good combination – and good enough for record-leveling win over Tennessee Tech.

DAYTON — It was sloppy, it was ugly, it was border-line boring and it was as much fun to watch as somebody pulling a splinter out of a pinky finger.

To the Dayton Flyers, though, it smelled like chrysanthemums, tasted like strawberry ice cream and was as welcome as hot chocolate on a sub-zero night.

When the Flyers took the UD Arena floor Wednesday night to play Tennessee Tech, they had lost three of their last four games and were off to an un-UD-like 3-and-4.

And they were playing an unknown commodity, unsure if this could make this night a Tennessee Waltz. The Golden Eagles were 7-and-2 and had scored more than 100 points twice. But who is Midway University and Boyce College, the two teams against whom T-T scored 100?

What concerned UD coach Anthony Grant was that the Golden Eagles are in the top five in the country when it comes to minutes played last year by its returnees.

After a few stumbles and fumbles, the Flyers pulled away at the end for a 79-66 victory when they led by only 63-56 with just under six minutes left.

And what made Grant the happiest was to look at the box score and see five Flyers in double figures for the first time this year.

As usual, Darrell Davis led the way with 19. Josh Cunningham scored 16 with 10 rebounds, freshman Jordan Davis came off the bench to pitch in 14, Trey Landers tossed in 14 and freshman Kostas Antetokounmpo scored 10 and hooked 10 rebounds. 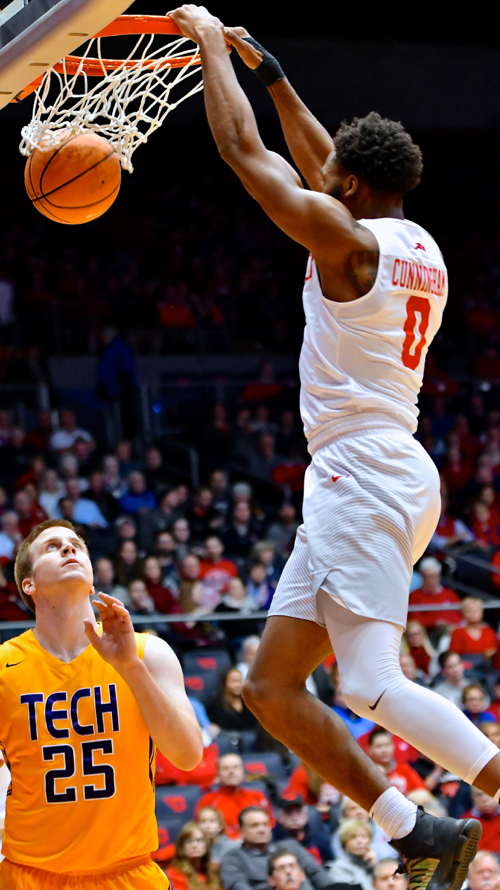 Josh Cunningham finished the night with 16 points and 10 rebounds.

The most astounding stat of all, was that Antetokounmpo, the Greek Freak II, had zero fouls at halftime and played 37 of the 40 minutes without fouling out.

There was a game earlier this year when Kostas had two fouls in the first 13 seconds of the game. And during Sunday’s two-point loss at Mississippi State he picked up two quick ones and sat most of the game.

The bench is a great place to watch a game, but not any fun when you are supposed to be playing in it.

“It don’t feel good, man, to sit and watch,” he said. “I feel bad because I know I should be out there helping the team. But I’m the one who puts myself in that situation.” 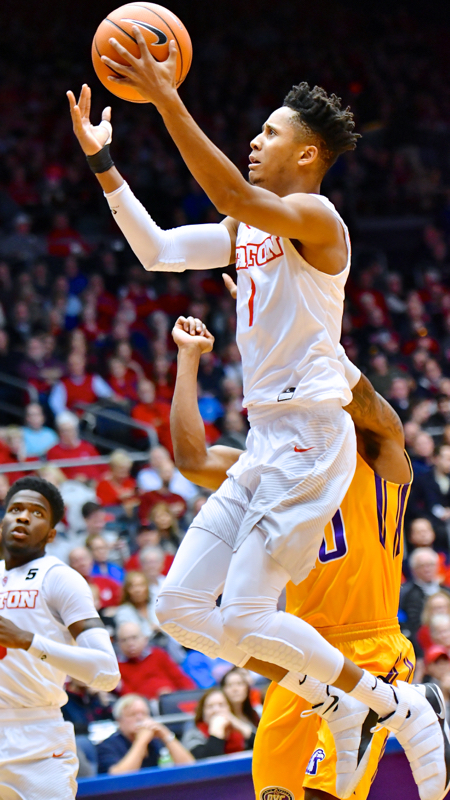 Darrell Davis was the Flyers’ leading scorer with 19 points.

And after Sunday’s loss, Kostas sat down with assistant coach Ricardo Greer, who forced him to watch videotape of every personal foul he committed.

“We sat in the office and he showed me every foul,” he said. Asked if that was painful, he said, “Yeah, I know. It was.” Asked if all the fouls are his fault or are some of them the fault of the officials, he smiled and said diplomatically, “Uhhhh, they are all my fault because I put myself in those situations. I shouldn’t do it.

“I wasn’t in foul trouble tonight and I’m surprised, too,” he said. “I was able to just keep playing. Sometimes I do risky things (trying to block shots, which he loves to do) and I tried not to do that tonight.

Grant, of course, was ecstatic that his 6-foot-10 red shirt freshman was a full-game participant and major contributor.

“Every game he is gaining experience, he is understanding a little bit more about what we want from him to be more effective,” said Grant. “By staying on the floor tonight he was able to gather 10 rebounds, which was huge. He impacted the game in a lot of different ways and he was a force on the defensive end.”

Grant, though, was appreciative of the cliché, A Total Team Effort.

“It was a great team win for us,” said Grant. “When we looked at them coming in, Tennessee Tech was like the third oldest team (in experience) in the country. For a team like ours, as young as we are, you look at how veteran they are and I challenged our team before the game that we needed to understand what we were up against.”

And top to bottom, the Flyers took it too heart.

“You love seeing 22 assists on the board and I really like seeing five guys in double figures,” said Grant. “That’s sharing the basketball and making everybody better.” 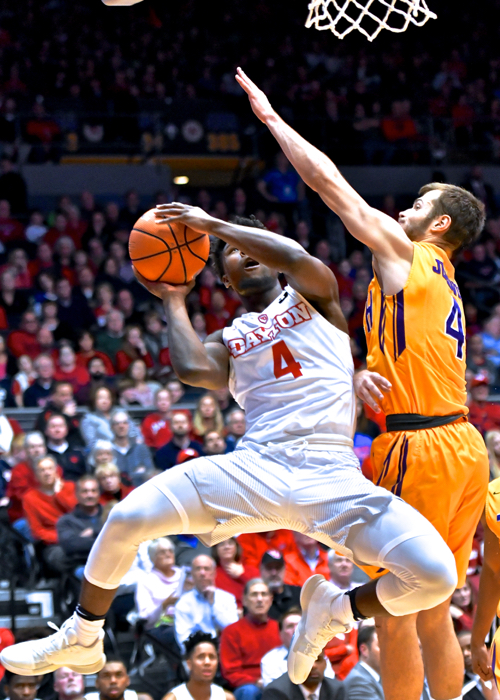 Jordan Davis twists to get off a shot in the win over Tennessee Tech.

The Flyers shot 58 percent on 31 for 54 that included many point blank shots, seven of which were slam dunks, some on efficient lob passes.

Cunningham was 6 for 6 from the field and four of five from the foul line. Trey Landers was 6 for 7, Jordan Davis was 5 for 8 and Darrell Davis was 7 for 15.

When Tennesse Tech crept to within 63-56, Cunningham slammed-jammed a basket, Landers converted a conventional three-point play after a drive to the basket, Darrell Davis hit a three and followed it with a two-point jumper, Landers hit two straight baskets and the Flyers were home free at 77-63 with two minutes left.

Josh Cunningham, as usual, was an all-around contributor on this night. And he chuckled about seeing Kostas on the floor most of the game instead of sitting on the bench with a warm-up shirt draped over his shoulders.

“I told him I was proud of him for not getting into foul trouble,” said Cunningham. “We need that out of him every game. He was still aggressive, but he was smart.”

So did anybody foul out? Yes. Josh Cunningham. 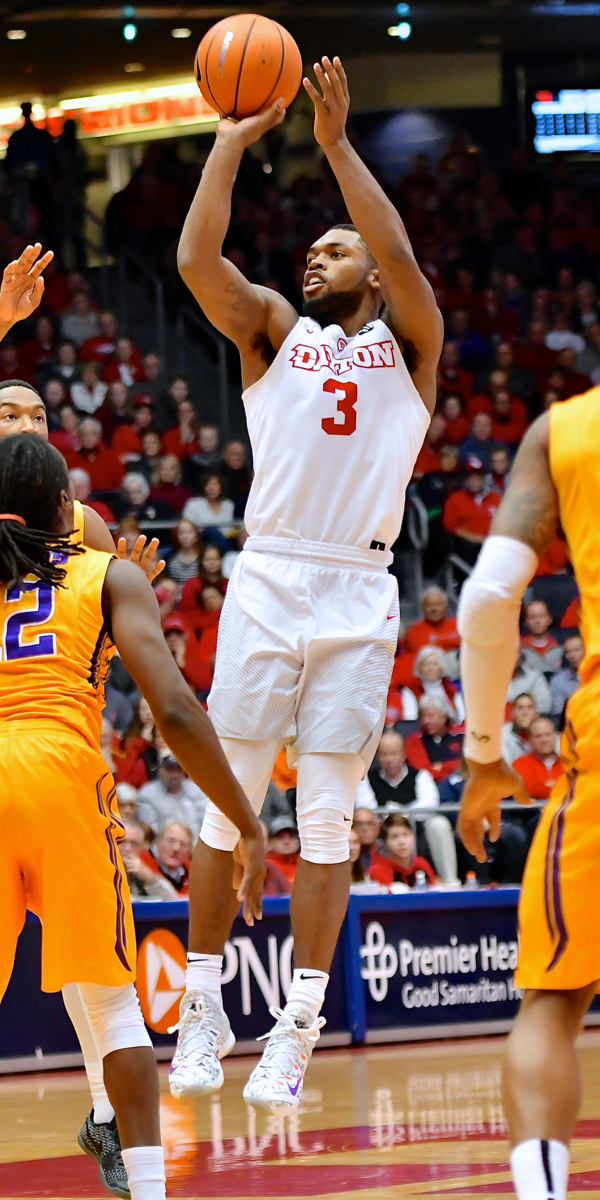 Trey Landers was one of five Flyers to finish in double figures.

“Bunkers” is proud to sponsor coverage of UD Basketball on staging.pressprosmagazine.com. 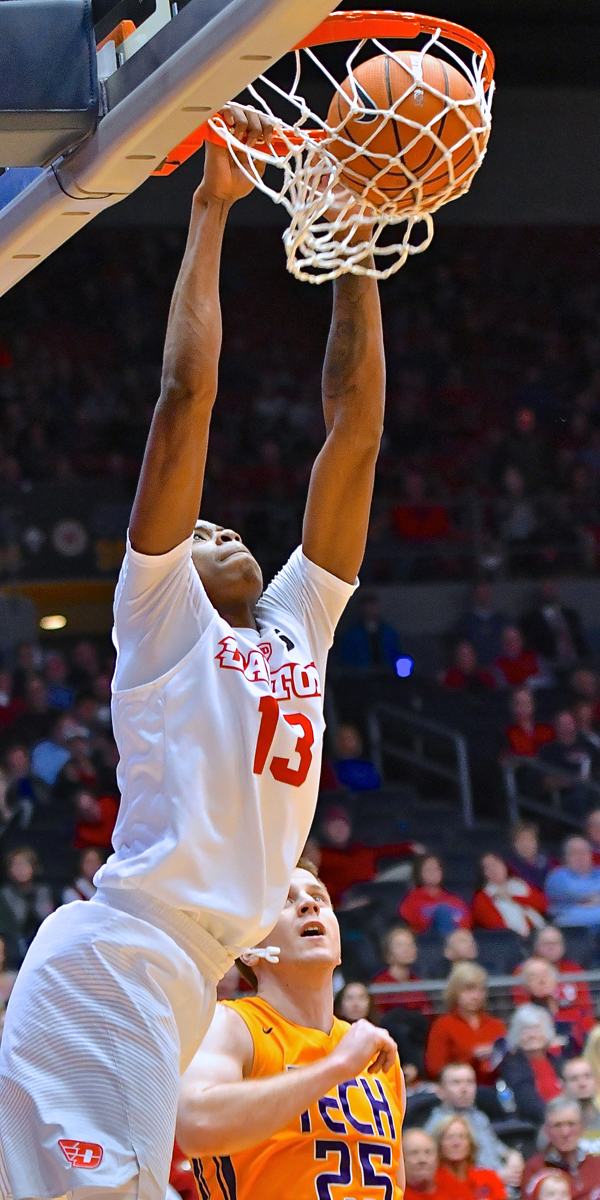