Tournament Wrap-Up: What No One Heard, And Pics Not Seen

It’s tough to tell the entire story of a tournament, and of a title, in one game story…what Paul Harvey used to call, “the rest of the story”.  Here’s a little bit more of what we reported over the weekend from Canton, and the OHSAA state football finals.

If I heard it often this past weekend.  Why are you covering some games on Press Pros, and not others – specifically, why just the Marion Local, Minster, and Wheelersburg games that marked landmarks of sorts for all three schools.  And to answer – we’ve never written all seven of the football finals because of lack of following in other markets around the state.

But at home, that’s another story.

For Marion it marked their tenth state title in the past 18 seasons under Tim Goodwin.  No one in Ohio high school football history has done so much in such a short amount of time.  The figures produced by the OHSAA on the Flyers post-game winning percentage are just staggering.  They’ve won 71 of 81 playoff games, overall (.877%). 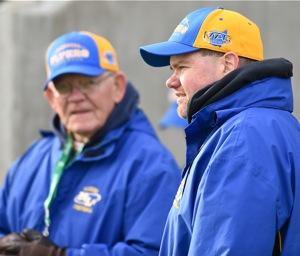 The Goodwins…father Bill (left) and son Tim (right) prior to taking the field.

And lest anyone believe that they’ve just knocked off a lot of “cripples” along the way, forget it.  They’ve won in Division V (over Youngstown Ursuline), Division VI (Newark Catholic and Kirtland), and of course, the best of Division VII…about which I consider the 2016 team from Cuyahoga Heights.

For Minster it marked their second title in four years, having beaten Kirtland back in 2014.  But their win Friday over what many considered another great Cuyahoga Heights teams was even more telling, even revealing.  Geron Stokes’ Wildcats not only beat Cuyahoga Heights, the best team from the northeast (on the heels of the state’s #1 team in the semi-finals, Norwalk St. Paul), they man-handled the best team from the northeast, 32-7.

Believe it, this site gets a lot of attention from football readers in the other 88 counties of Ohio – from other media people and fans alike.  Because…we write what we see and we state the facts and percentages.  And one of the questions I heard frequently at this weekend’s tournament was this:  “How does Marion Local, and other MAC teams, do this year after year?”  How can it be possible to actually win 10 titles in 19 seasons…and six in the past seven years, as Marion Local and Goodwin have done? 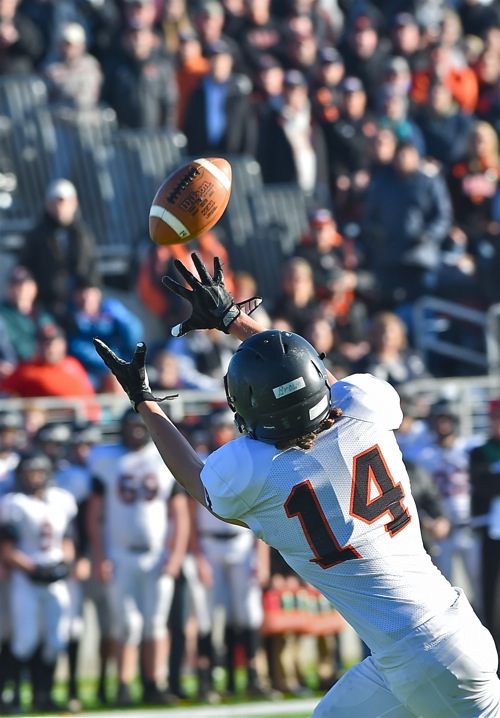 Incoming! Minster’s Austin Brown makes his first quarter touchdown grab while his teammates and community looked on.  And before next season…take the name tag off the back of his helmet.

It’s a good question, and one that Press Pros colleague Stan Wilker and I talked about at length during the weekend.  And the best answer that we came up with is…that while a state title to some represents something to dwell on for the rest of your life, at Marion Local success is measured as a journey, and not a destination.  Today’s title is little more than a rung on the ladder to tomorrow’s success, and another, different, title.

Goodwin was asked by a neophyte reporter following Saturday’s win over Kirtland, “What does this latest title mean to you?”

“I really don’t think about it,”  answered Goodwin.  “Those things are not what I dwell on.  On the bus ride home I’ll be thinking about next year already.” 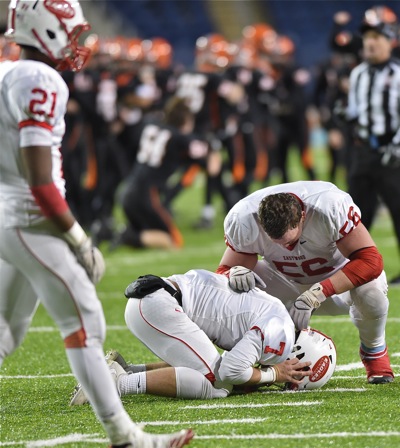 Jubilation and dejection…Wheelersburg celebrates its overtime win in the background, while Eastwood players agonize over a lost fumble that sealed their doom.

And one can make a case like that for Minster, as well.  Repeatedly throughout the year Geron Stokes would say, “We really don’t think in terms of wins and losses.  What we want to do is maximize each day of practice and have that carry over to our games on Friday.”  In other words, perfect the process and let the results take care of themselves.  They’re different words than what Tim Goodwin uses, but the meaning is the same.  Life is not about having a single success…and then rest on it.

On the sidelines this weekend I paid particular attention to what was being said, and fans’ reaction to the process of winning and losing.  My father once surmised that no one is more fun to observe than people, and he was right.  Faced with the pressure of achieving success, people say and do some pretty interesting things.

For instance, I heard during the weekend that Marion wins because football is all that matters at Marion Local.  No one actually knew that for sure, I think they just guessed – they did the math.

“What kind of school is Marion Local?”  asked one former player standing alongside the 2017 Kirtland team Saturday. 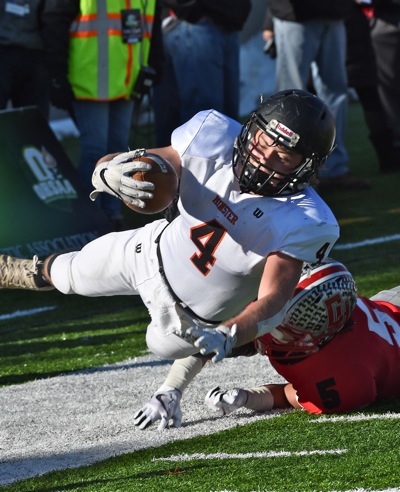 Isaac Schmiesing dives for the end zone in the Wildcats’ win over Cuyahoga Heights.

“Just a public school that has good academics and wins in football,”  I shared.

In the middle of nowhere……!

On Friday I heard some of the same in reference to Minster, and other MAC schools.

“It’s all they do in that conference, I looked it up,”  said one partisan from Cuyahoga County, referring the MAC’s 124 state titles claimed since 1972.

Or the most absurd of all…..”If those teams had to play schools from urban areas they’d have a different record.”

“And how would they do that?”  I respectfully asked at halftime.  “Do they have the means in Cleveland to travel to Mercer County just to prove a point in football?” 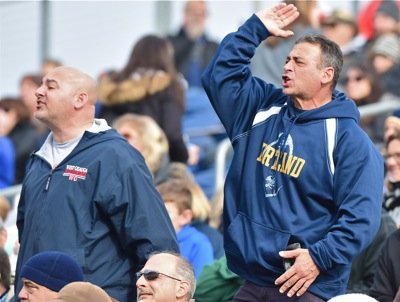 The fans weren’t happy with the officiating (of course) in the Kirtland-Marion Local game.

The man smiled at me, and shook his head  “Their record is pretty incredible,”  he said.

They used to say those things about the Yankees during the days of DiMaggio, Mantle, and Yogi Berra.  Dynasties invite envy.

And for that matter…title success locally was not just limited to the MAC, as evidenced by Trotwood’s thrilling 27-19 win over Dresden Tri-Valley (their second title win).  It marked the third football title in the relatively short history of the Greater Western Ohio Conference (GWOC), the other belonging to Piqua, and sheds some light on the competitive merits of local teams like Tipp City, Troy, Piqua and Butler, teams that the Rams have played for years.  We don’t see them (Trotwood) as much as we used to, because they moved from the North to the Central division of the GWOC after the 2015 season. 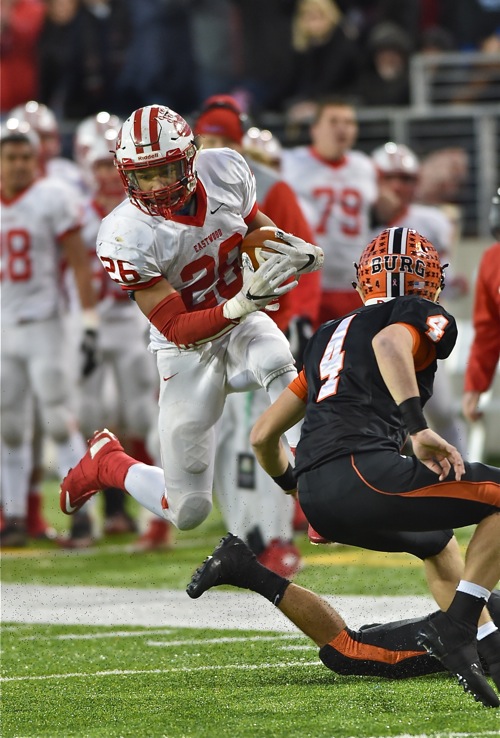 Eastwood’s sophomore, Jayden Rayford, was spectacular in the Div. V game with Wheelersburg.

And Trotwood IS an urban school, and got to the Finals by beating other urban schools, including parochials, Chaminade-Julienne and Toledo Central Catholic.

This is just some of what you hear if you listen, and ask questions, at a state tournament venue.

For the sake of the question about Canton, the new Tom Benson Stadium, and a comparison to holding the event in Columbus?

For one, Columbus is unquestionably more convenient to the rest of the state.  Just ask the people from Wheelersburg who were happy to make the four hour trip back home with a title;  but it would have been much easier, travel-wise, had the tournament been played again at Ohio State.  Wheelersburg is a ninety minute drive right down route 23.

Two, parking in Canton is a nightmare.  The streets are a nightmare – too many cars and not enough room for tournament traffic.

Three, organization was severely lacking, partly because the new stadium is not completed. 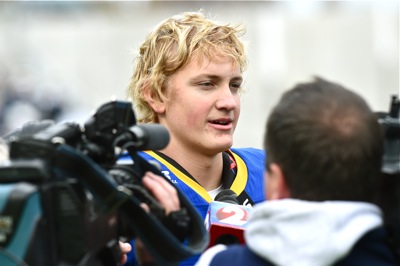 Four, the security measures of searching every fan to come through the gates was annoying, and unappreciated by those who stood in line for as long as thirty minutes.  People from Minster and Marion Local are accustomed to coming to the game late, walking in unsearched, and just watching the game.  Some probably missed the first quarter of Friday’s game with Cuyahoga because they were standing in that line.

Facility-wise, the playing field, the lighting, and the comfort of the stands is all NFL quality, and will be wonderful in the future.  It’s just not ready for prime time at the present.

And to the OHSAA, once again they run their show to a very high standard.  It’s just unfortunate that someone has to play at 10 am in the morning…or in the 8 o’clock game on Saturday night when much of the media coverage had to be on the road for home.  But daylight football is wonderful for the sake of photography, and we’re happy to share more of what we saw at the tournament here with you.

And by the way…I always enjoy recounting the best line heard during a particular sports season.  This year it came from Minster’s Geron Stokes, post-game, after his Minster team had given up a running clock lead to Fort Loramie in the second half of their playoff game,  during which he pulled his regulars.  Said Stokes in his post-game address:  “We have to get better for next week and Crestview.  We have to have a much better defensive effort from our JVs.”

Thank you for another fabulous season of football on Press Pros.

And mark you calendar for next August 24th, opening night, 2018! 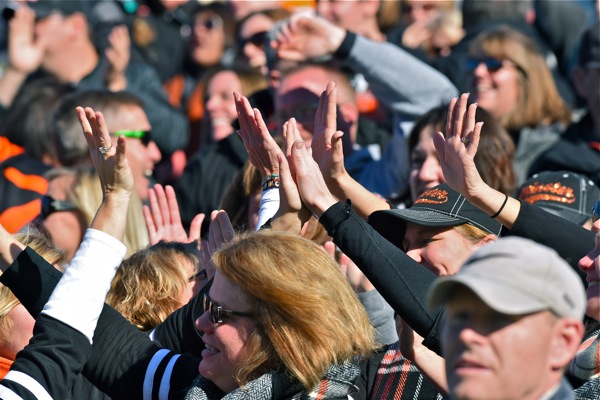 Give me a hand…One of the favorite photos from the weekend – Minster moms ‘high five’ the Wildcats win over Cuyahoga Heights.

“The Spot” Restaurant, in Sidney, is proud to be the official sponsor of the 2017 OHSAA State Tournaments on Pros Magazine.com. 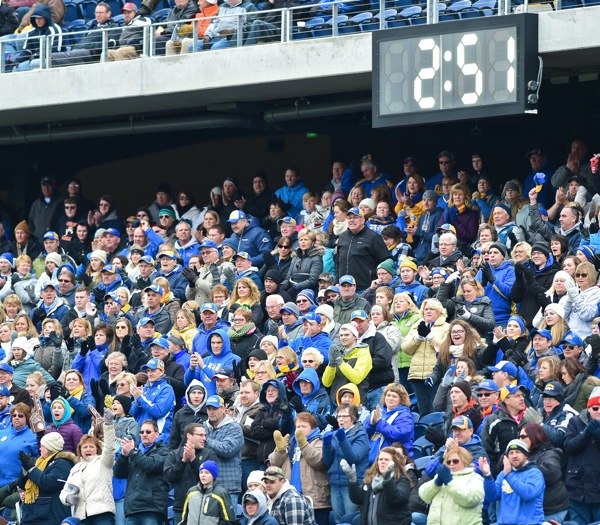 Faces in the crowd...Marion fans whoop it up as the clock wound down on the Flyers' Division VI title win over Kirtland. (Press Pros Feature Photos by Sonny Fulks and Julie McMaken Wright)