In the seventh and final game of the OHSAA Football Championship weekend, the Trotwood Madison Rams earned their second big trophy by holding off a determined Tri-Valley team 27–19.

The win is particularly sweet for this year’s GWOC standard bearer as the Rams completed another perfect 15- 0 season, duplicating that of the 2011 squad.  And, they completed the season long battle cry of “FINISH”, as Coach Jeff Graham’s squad used the 2016 title game loss to Akron Hoban for motivation throughout the 2017 campaign.

The Division III title game, along with the Wheelersburg-Eastwood game, provided the greatest drama in the football-filled weekend in Canton. Only a goal line interception by Rams linebacker Jayvanare Nelloms prevented a second overtime to decide a championship.

Starting on the Trotwood 23 yard line, the Scotties of Tri-Valley drove to the 7 yard line of the Rams and looked to score the potential game tying score on the arm of All-Ohio QB Andrew Newsom. With 21 seconds remaining in regulation, Newson threw an ill-fated pick to Nelloms setting off the celebration for the Trotwood players and fans.

Nothing came easy for either team as the first 10 minutes of the game were dominated by the respective punters. This would end in dramatic fashion as Raveion Hargrove, arguably the finest running back in Ohio, provided the game’s first score on a 41 yard scamper to paydirt. Not to be outdone, the Scotties provided lightning of their own as all-everything Andrew Nelson set an all-time playoff record with a 99 yard run to cut the lead to 7-6 after the missed PAT. 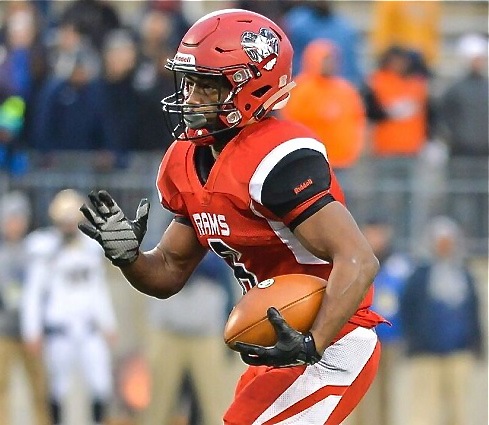 Raveion Hargrove led Trotwood with 20 carries for 138 yards and a touchdown.

The Rams then showed the crowd of over 6,000 that this is not just the Raveion Hargrave show.  Markell Stephens-Peppers hooked up with William McDaniel on 56 yard pass given Trotwood a 14–6 lead.

The resilient Scotties’ next drive showed no ill-affects from the long Ram score as they struck back with a score of their own, just a minute later, featuring a 48 yard completion to Jake McLoughlin, and the 16 yard scoring strike to Spencer Littick…14-13, Rams.

But the first half excitement was not complete. Ram standout William McDaniel gathered in a Tri-Valley punt, returned the pigskin 70 yards, but time ran out before Trotwood can dent the scoreboard one more time.

As the second half approaches it was anyone’s guess as to who would walk away with the gold.  Tri-Valley provided the first clue at the 9:50 mark of the third quarter as Newsom completed a 24-yard scoring strike to Dow Cameron, giving the Scotties their first lead of the game at 19 -14.

Ram head coach Jeff Graham was probably the most composed person in the stadium facing this turn in events. Being around these young men Graham knew what they are made of.

“It’s a lot of perseverance.  These kids work hard and do everything we ask of them” said Graham afterwards.  The Alter and OSU alum knew of what he spoke as Trotwood answered the Tri-Valley score with consecutive scores of their own, both by William McDaniel to take the 27-19 lead, setting up the game ending heroics of Nelloms with the red zone interception.

The Rams were led by three outstanding seniors:  Raveion Hargrove (138 yards on 20 carries), William McDaniel (92 yards on 17 carries), and quarterback Markell Stephens-Peppers, who complemented the running attack by completing 6 passes in 15 attempts for 115 yards. And while these three outstanding players will surely be missed, be assured that the Ram machine will continue to move forward.

“The Spot” Restaurant, in Sidney, is proud to be the official sponsor of the 2017 OHSAA State Tournaments on Pros Magazine.com.