Mindful, and motivated, by an opponent who took one away just two years ago, Marion Local atones for a second half letdown then to sweep Kirtland and win its tenth state title in the Division VI title game, 34-11.

Canton – They say that elephants have long memories.  Perhaps they do.

If so, they’re nothing compared to the mindfulness of head coach Tim Goodwin and his Marion Local Flyers.

Facing Kirtland in Saturday’s Division VI title game, the team that took a second half turnover and flipped the fortunes of the same title game just two years ago, denying Marion its fifth consecutive championship, Goodwin used his recollection as motivation Saturday morning, and used it well.  The Flyers atoned for that disappointing 2015 outcome by thoroughly beating Kirtland, 34-11.

They did it by playing their best, and most complete, game of the year, completing another perfect 15-0 season – dominating on both offense and defense.  Kirtland coach Tiger LaVerde would say afterwards, “They were big, they were athletic, well-coached, and they were simply the better team today.  They would have been very hard to beat.”

Some irony.  Kirtland’s players were mindful of that 2015 game, as well, and tried to use it to their own advantage after a first quarter field goal that gave the Hornets an early 3-0 lead.  Having taken the opening kickoff, Kirtland drove 51 yards in 14 plays to the Marion 10 yard line.  But the Flyers’ defense stiffened and denied them the end zone, forcing them to kick a 33 yard field goal. 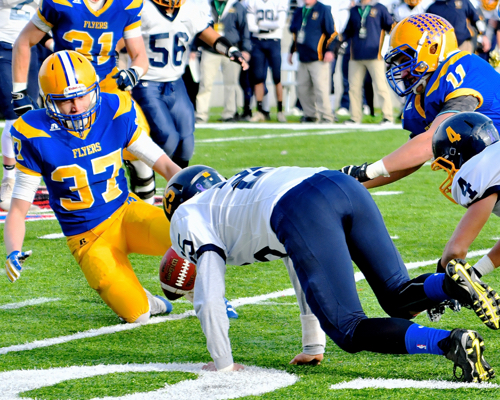 A critical Kirtland fumble in the first quarter gave the Flyers the ball (Caleb Bruns, #37) and good field position.

Kirtland’s huge offensive tackle, Kalid Alabsi, all 6’6″ and 295 pounds of him, came to the sidelines and reminded his teammates.  “Keep working,” said Alabsi.  “We’re going to wear them down.  They’re going to wear down.  Just like before.”

Alabsi’s statement was about the last positive thing in Kirtland’s day as Marion would go on to score 34 unanswered points between 5:23 mark of the first quarter…and the 2:29 of the fourth quarter when Kirtland would score a non-consequential mop-up touchdown to make the score more respectable, 34-11.

In between…Nolan Habodasz would score the Flyers’ first TD on on a one yard run at 1:05 of the first…8-3, after a two-point conversion on the point after attempt.

At 2:38 of the second Jack Buening scored on a three-yard run to lift the margin to 20-3 at halftime.

Unlike two years ago when the Flyers came out and drove the length of the field to open the second half, only to fumble on the Kirtland goal line to flip momentum and the game, this time Marion drove the field and scored, emphatically, on a Nick Tangeman 20-yard touchdown from Bruns, his second score of the game…27-3, Marion.

And 30 seconds inside the fourth quarter Alex Partington concluded Marion’s scoring with a one-yard run to make the deficit 34-3.

The difference in the game?  Well, the elephant in the room – Goodwin’s memory –  and yes, motivation had a lot to do with it.  But more, the play of junior wide receiver Nick Tangeman was a weapon not seen in 2015 that Kirtland simply could not defend. 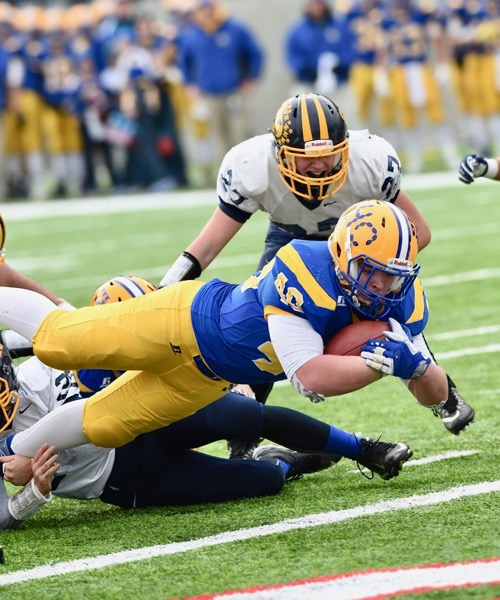 Marion’s Jack Buening dives across the goal line to give Marion a 20-3 halftime lead.

At 6’4″, Tangeman towered over the Kirtland secondary players and Goodwin had the confidence in his passing game to have quarterback Nate Bruns throw the ball up and let Tangeman make plays.  He did…six catches for 120 yards and those two touchdowns.

“He was big and long, and he knew how to use his body to go up and make those catches,”  said Kirtland safety Mike Zeuli.  “We just didn’t stop him.”

“All the credit goes to my teammates,”  Tangeman said later.  “They helped me make those plays and I loved doing it for them.  Winning number ten feels amazing.  It’s a nice even number and it feels great.  We’re already excited for next year because a lot of us are coming back.”

Winning never gets old, even when you’ve won the state championship ten times, as OHSAA deputy commissioner Debbie Moore said in her trophy presentation to the the Flyers’ seniors. 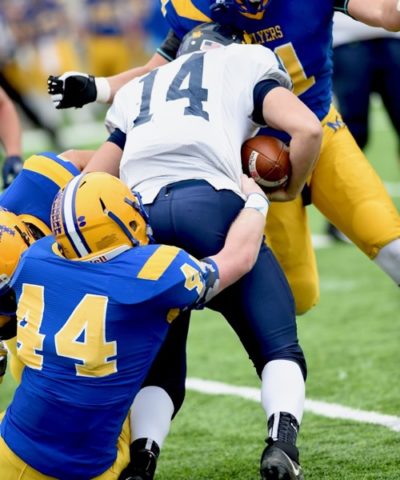 “It never does get old,”  said Bill Goodwin, Flyer assistant and father to the head coach.  “It just keeps gettin’ better all the time.  Today was a sweet one, because of what happened to us two years ago.  It’s just unbelievable…because nobody wins ten state championships.”

Ah, but the Flyers have, and now stand in second place all alone with the second-most titles in OHSAA history.  Only Cleveland St. Ignatius is ahead of them now, with eleven!

“They were big strong football team,”  added Tim Goodwin, speaking of Kirtland.  “And they play a style that we don’t see that much in our part of the state, a team that’s that dedicated to a power running game on every play.  Two years ago we weren’t as big and strong as we are now, and we weren’t as prepared.  But after we’ve played them once, we were more prepared for them today.”

“Nick’s really made big plays for us all year long,”  said Goodwin, matter-of-factly.  “So I wasn’t that surprised by what he did today.” 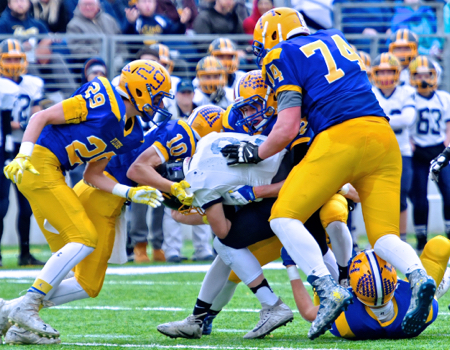 Marion’s defense swarms to Kirtland ball carrier  Jake Niebecker in the second half.

Nor was he surprised by the focus and execution of his football team, a group that converted on 11 of 13 third down opportunities.  Time after time the running game, or the pass game with Bruns and Tangeman, kept coming up with the big play to move the chains.

After last week’s semi-final win over Liberty Benton, Goodwin stated that his number one priority this weekend was to come to Canton and play their best game of the year – in all phases of the game.

“Offense, defense, and special teams, I thought we all played well.  Today was a a great way to end it (the year),” said Goodwin.  “And stopping them and keeping them out of the end zone on their first drive was a big thing for us.  We just can’t simulate that offense in practice, and once we settled down we got into a rhythm and figured out what they were trying to do.  Obviously we didn’t want them to score, but once we forced them to kick the field goal, against that big strong running game in the red zone, I felt pretty good, really.” 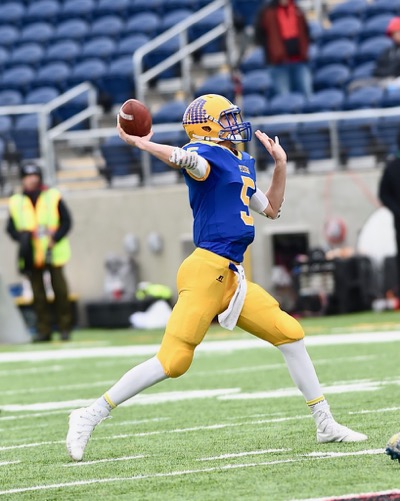 Marion quarterback Nate Bruns had his best day – 10 of 15 for 178 yards and two touchdowns.

And moments after that opening field goal, he felt even better after a Marion punt was fumbled and recovered at the Kirtland 40 yard line, setting the Flyers up for their first touchdown.  Fate takes away, and fate gives back sometimes – a direct reversal of the fortunes of that 2015 game when it was a Marion fumble that tipped the game in the Hornets’ favor.

“I didn’t think it changed the game,”  said Goodwin.  “But it was a good break for us and a great play by our special teams.”

Marion won their tenth title with 331 total yards of offense, 153 rushing and 178 through the air.  Nate Bruns had his best passing game of the year, completing 10 of 15 for for 178 yards and two touchdowns.

The run game was diversified, as it has been of late, with Jack Buening (46 yards), Alex Partington (45 yards), Nolan Habodasz (37) yards and Nick Tangeman (18 yards).

Tangeman led both teams in receiving with his six catches, and Matt Rethman was a perfect complement, catching four balls for 58 yards. 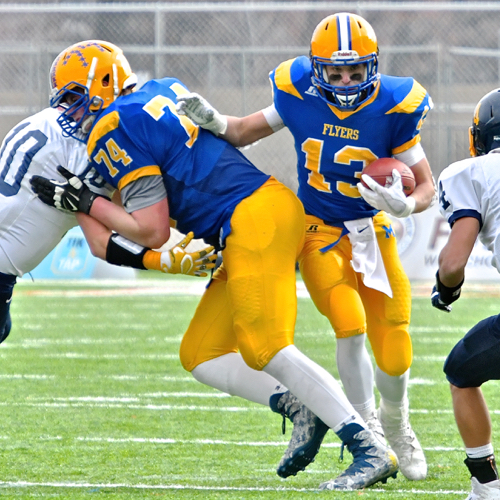 Kirtland had 184 total yards, with 127 on the ground and 57 through the air – and Jake Niebecker led the Hornets individually with 77 yards rushing.  Joey Torok contributed another 60 on the ground.

But it was the motivation of that 2015 game that senior Ben Homan will remember most.

“We heard about it all week from him (Goodwin),”  said Homan in the post-game interview room.  “Every time we’d slack off in practice he’d remind us, and tell us that the way we were working the same thing would probably happen to us again.” 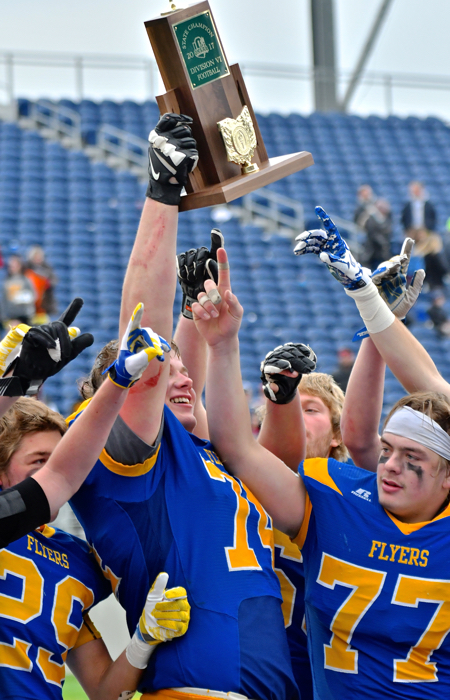 “It felt good running behind our line today,”  said Alex Partington, commenting on the Flyers’ own power game.  Partington finished his Flyer career by contributing to the atoning accomplishment with his fourth quarter touchdown.

And frankly, it felt good to just about everyone in blue and gold.  Another nice round number, 8,062, turned out to see it, and Kirtland will remember it as a day when a bigger, better Marion Local took advantage of the turnovers, and made the most of their advantage.

“They drove the ball down the field, they used their size and their big backs…and they executed their passing game.  You’ve got to give them credit.  By far they were the better team offensively, defensively, and in the kicking game.  They won all three phases of the game.”

They never did wear down, by the way.  Or perhaps, on this day…they just had the better memory! 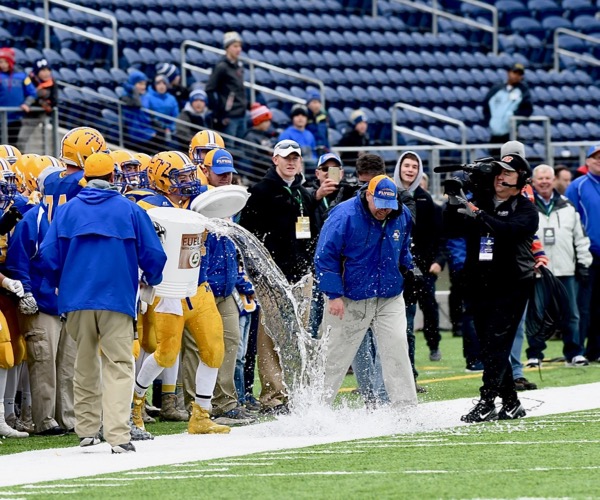 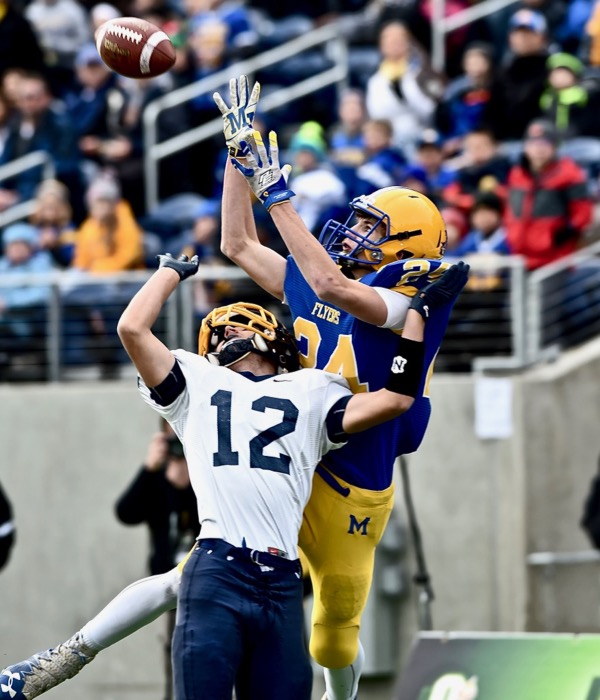