In Division V: The ‘Burg Borrows, And Wins The Division V Title

Wheelersburg punctuates its unbeaten season with a dream effort, and a dream outcome, claiming the Division V title in football with an overtime win over Pemberville Eastwood.

Canton – More than one fan from Wheelersburg, Ohio was heard to comment prior to Friday’s Division V championship game with Pemberville Eastwood High School.

“If this was in Columbus it would have been a whole lot easier.” 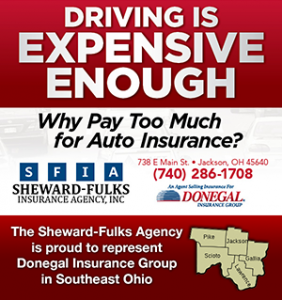 The Sheward-Fulks agency extends its best wishes to the 2017 Wheelersburg Pirates.

That’s true.  Wheelersburg, for the geographically challenged, is located about 90 minutes south of Columbus on Ohio route 52, about five miles east of Portsmouth and route 23.  Canton, by comparison…is a haul.

But no one was complaining Friday night, following the Pirates’ thrilling 21-14 overtime win over Eastwood for the 2017 Division V football crown.

Wheelersburg, ranked among the state’s best for the entire season, topped off its perfect 15-0 season by taking a 7-6 halftime lead in a titanic defensive struggle, then falling behind 14-7 in the fourth quarter on a late Eastwood touchdown by running back Jaden Rayford.  Then, in dramatic fashion, they tied the game with a thrilling 70 yard tying drive with 1:06 remaining on the scoreboard clock.  Makya Matthews scored the tying touchdown on a 12-yard touchdown pass from quarterback Trent Salyers. 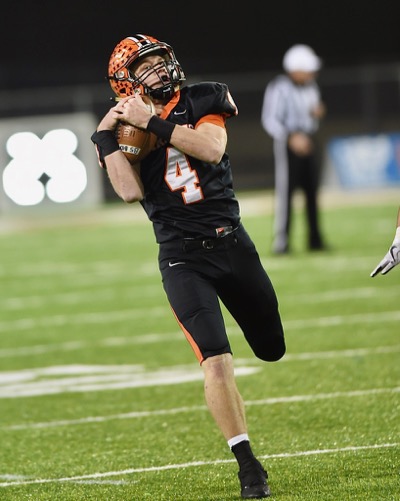 It sent the game into overtime, where Wheelersburg got the football first, and scored on an unusual play from the 11 yard line when running back Xavier Carmichael faked a run, then stopped at the line of scrimmage to jump and loft a pass to teammate Tanner Holden for the go-ahead score…21-14.

It was Eastwood’s turn to possess the ball, and the Eagles promptly drove the ball to the ten yard line.  But on what looked like a scoring run opportunity by star running back Jaden Rayford (who ran 30 times for 141 yards), Alex George and teammate Avery Donini combined for a tackle on the four yard line, Donini’s hit squarely on the tip of the football.  The ball popped loose, another Wheelersburg teammate jumped on it…and the matter was settled.  The championship, their second all-time, belonged to the Pirates.

It set off a thunderous celebration on the Wheelersburg side of Tom Benson Stadium.

It set off a mood of abject dejection amongst the Eastwood players, many of which just collapsed on the field.

Titles, as people are prone say, come hard.  And, they’re really hard for a team like Eastwood, making just its first-ever Finals appearance.

From a local point of view, there was a twist of irony to the Pirates’ win.  Just two years ago they lost to Coldwater in the 2015 regional finals game in Xenia, a game about which afterwards Wheelersburg coach Rob Woodward was particularly gracious in defeat. 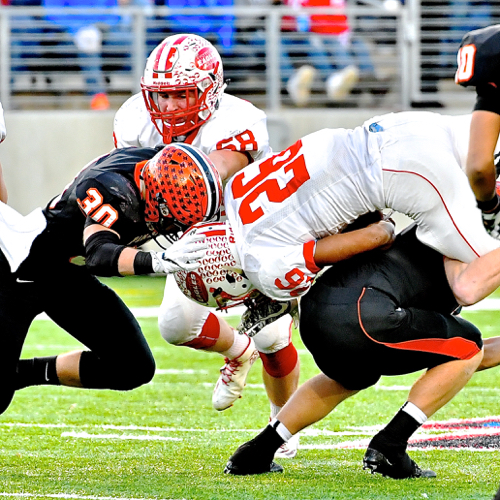 Wheelersburg’s defense was the hardest hitting that Eastwood had seen all season.

“We respect Coldwater for the kind of program they are, and how they represent Ohio high school football,”  said Woodward at the time.  “Frankly, I tell our kids…we want to become like Coldwater.  We need to be physically tough, mentally tough, and capable of winning when winning doesn’t come easy.”

Well, it didn’t come easy Friday night in Canton, and Rob Woodward smiled as he remembered our conversation following that Coldwater game two years ago.

“You bet I remember it,”  he said with a smile.  “In fact, Coach (Chip) Otten and I coached together this summer in a North-South all-star game.  And yes, we’ve taken something from a lot of teams and experiences prior to today.  We’ve learned along the way.  We’ve taken something each and every year from the teams that we’ve played and put that together to get where we are tonight.”

It wasn’t like they needed a lot of help – for Wheelersburg in 2017 was recognized state-wide as one of the most talented of all the small-division schools.  They have great team speed, a cool quarterback in Trent Salyers, a legitimate Division I receiving prospect in Tanner Holden, and a defense that swarms to the football. 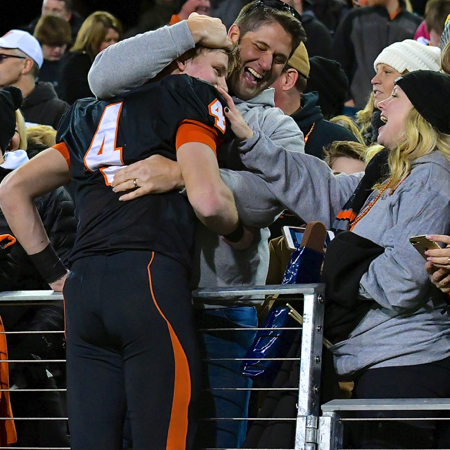 The post-game celebrations included personal interaction with fans and parents.

“Their defensive front was as tough and quick off the ball as anyone we’ve played all year,”  said Eastwood coach Craig Rutherford.

“They hit, they really hit,”  said Eastwood quarterback Jake Pickerel.  “Tonight was the hardest hitting game we’ve been in all year.”

And to Eastwood’s credit, they did something that no other team had done all year.  They bottled up the Wheelersburg offense that had averaged 40 points a game and a dizzying number of total yards per game.  Friday night Wheelersburg had just 207 total yards, about half their average total in the regular season…and just 13 yards net rushing.

Wheelersburg’s defense, credited so highly by Rutherford and his players, gave up 227 total yards in return.

To another comparison with Coldwater, Chip Otten has a reputation for reaching deep in his playbook when its necessary.  And in complimenting fashion, Rob Woodward was imitating that when he drew up the jump pass that won the game in overtime. 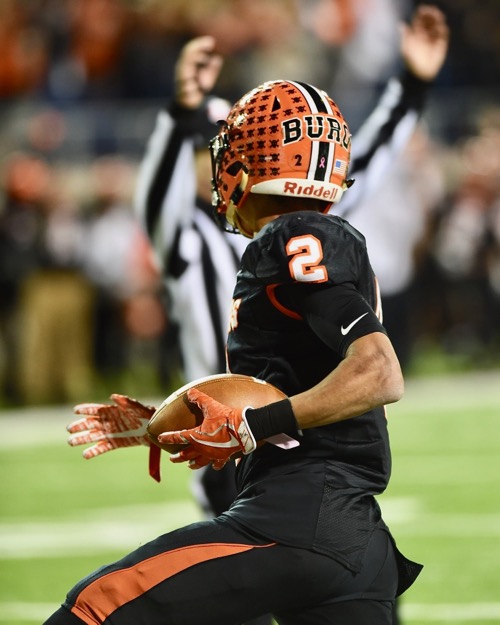 The ‘Burg’s Tanner Holden looks for the call after he scored the go-ahead touchdown in overtime.

“We actually practice it all the time,”  said Woodward with a smile.  “But in coaching, you need a tool box (a Chip Otten phrase) and sometimes you have to reach in the tool box when you need something.  We had to do that in the Columbus Academy game when we were down 13 points.  You practice things even though you don’t always display it…until you need it.  You’ve got to have a tool box that you can go to when situations dictate it.”

It took Coldwater years before they won their first state title in 2005 under then coach John Reed.  But with the manner in which they worked, and won, titles became a habit under Chip Otten, who won four consecutively from 2012 through ’15.  Rob Woodward can only dream that what he’s borrowed in his ten seasons at Wheelersburg can pay such dividends.

Prior to his death this summer, I spoke back last winter with Wheelersburg native and baseball icon Gene Bennett.  Bennett, the long-time Reds scout who signed players like Barry Larkin and Don Gullett, and a huge ‘Burg fan and benefactor, commented then, “I wonder if I’ll live to see Wheelersburg win a title in football like they have in baseball.  You know, I think they’re gettin’ pretty close.” 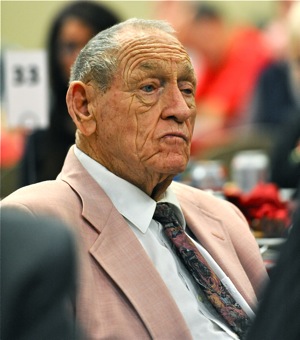 Reds scout Gene Bennett was the baseball patriarch of Wheelersburg, and a huge fan of the Pirates.

“I used to see him at Subway all the time,”  said Woodward Friday, when I shared with him my conversation with Bennett.  “I was usually in a hurry to get back to school, but I always took the time to stop and talk with him.  I’m sorry he wasn’t here tonight to see it.”

But somehow I think Gene Bennett was there to see it, if not in physical form.  As the game ended suddenly with the fumble recovery in overtime, the partisan Pirate crowd burst into the chant, “We are the ‘Burg”.  I’m sure he heard that, too.  And lest you scoff, understand.  In Wheelersburg they believe in the physical and spiritual coming together to aid with all things good.

Particularly for the things in life that don’t come easy.  It’s what’s made the ‘Burg…the “Burg.

And ask Chip Otten.  They don’t mind borrowing a few things, either.  A little something…for the tool box! 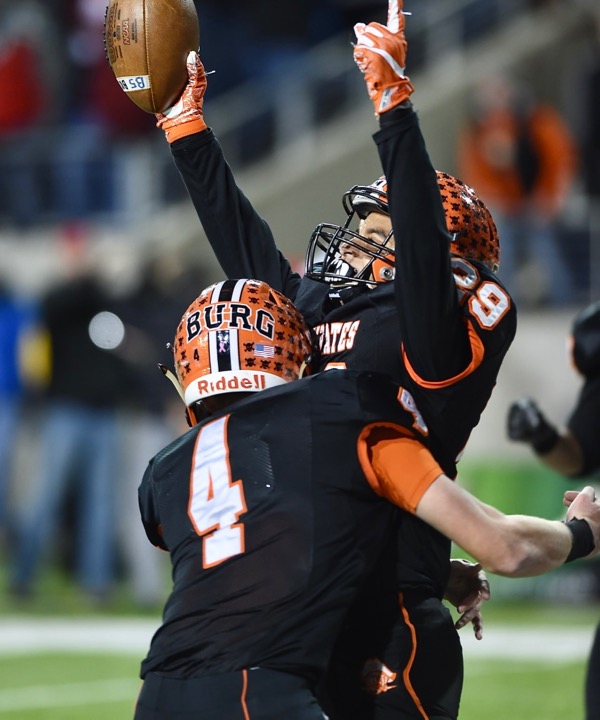