They started off cold from the floor, while Auburn lit up the arena from behind the three-point line.  Add one wardrobe malfunction by their coach, and Auburn made it a pretty miserable night for the UD Flyers.

DAYTON – As it became self-evident late in the first half that this might not be a fun night, not much to cheer about, the University of Dayton student cheering section made a humorous discovery.

Auburn coach Bruce Pearl’s fly was open about as wide as some of his three-point shooters.

Pearl obliged with a healthy yank, then walked toward the students and yelled, “Why didn’t you tell me before I appeared on national TV?”

That set off the student section and it began chanting, while pointing at Pearl, “FBI, FBI, FBI.”

It was a reference to the FBI investigating former Auburn assistant coach Chuck Person, one of the several assistant coaches across the country allegedly involved in the shoe payoff scandal.

In fact, it cost Pearl and the Auburn Tigers their two best players — center Austin Wiley and forward Danjel Purifoy. It is suspected that both were involved in the shoe scandal and have been suspended indefinitely until it all blows over, if it does.

Auburn, though, is showing that it doesn’t much miss those two and they displayed that to the Flyers Wednesday night in UD Arena.

The Tigers built a double-digit lead late in the first half and never gave it up en route to pinning a 73-60 defeat on the Flyers. It ended UD’s 16-game winning streak at UD Arena and it was only the fourth defeat in the last 19 games against Southeastern Conference opponents. Even without Wiley and Purifoy, both NBA prospects, Auburn is 5-and-1. In their previous game they scored 119 points against Winthrop and in their opener they scored 102 against Norfolk State.

Pearl’s teams are always offensive-minded and like to, uh, zip up and down the floor while their coach zips it up on the sidelines.

But even Heron and Brown didn’t hurt the Flyers in the first half. Heron had two points at halftime, both free throws, and Brown had five and was 1 for 5 from the three-point line.

But a gentleman named Chuma Okeke came off the bench to score 13 first-half points and another bench occupant, Anfernee McLemore, chipped in eight.

Those two helped Auburn to an 11-point halftime lead, 35-24, then turned it over the Heron and Brown. Heron scored 19 in the second half for game-high 21 and Brown scored six to finish with 11.

Auburn sniped away from down range, making 10 of 25 three-pointers, three of four by Okeke.

Another starter, Jared Harper opened the game with two straight three-pointers for a 6-0 Auburn lead and he didn’t score again until the game was nearly over. 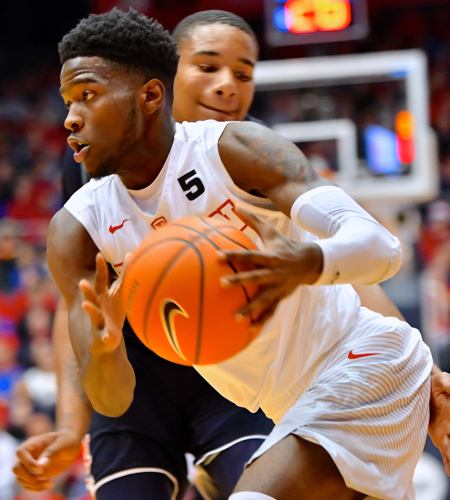 Meanwhile, UD center Kostas Antetokounmpo, could have started the game with his warm-up jacket on because he was wearing it again 18 seconds into the game. Yes, two fouls in 18 seconds and back to the bench he went.

In the first five minutes, the Flyers committed five turnovers and were 1 for 9 from the field and fell behind, 11-2.

Then it was Auburn’s turn. They threw up a zone defense fence that the Flyers couldn’t climb over.

The last time the Flyers were nose-to-nose with Auburn was a 20-19 deficit with 9:49 left in the half. Auburn’s Okeke came off the bench to score eight straight points, six on a couple of three-pointers, and Auburn outscored the Flyers 15-5 the last 10 minutes of the half for the 11-point lead UD was not able to penetrate in the second half.

If nothing else, the Flyers may have discovered a point guard. Starter John Crosby was ineffective in the first half and UD coach Anthony Grant turned to freshman Jalen Crutcher. Crosby played only eight minutes while Crutcher was on the floor for 34 minutes and scored 15 points.

And the 6-foot-1 freshman from Memphis, Tenn., just might have earned himself a start Sunday when the Flyers play near his home in Starkville, Miss., against Mississippi State. 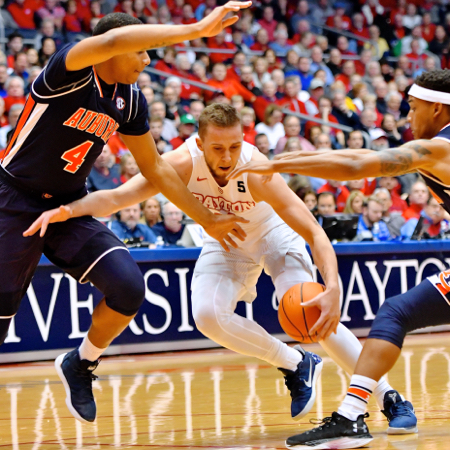 “We were having a tough time sustaining offense in the first half because their zone defense was causing us problems,” he said. “I felt we could give that defense a little more movement. And I thought Jalen would be more of a scoring threat. It was a coaching decision over making that change.”

Crutcher said Grant told him before the second half began that he was starting, “And he told me to just go out there and be myself.

“I got more aggressive as the game went along and as I went up and down the court my confidence built up,” he added. “Our team is best in transition and I was just trying to tell our guys to get some stops so we could score in transition.”

Crutcher hopes to start Sunday because Starkville is a couple of hours from Memphis and he’ll have family, friends and high school teammates and coaches in attendance. 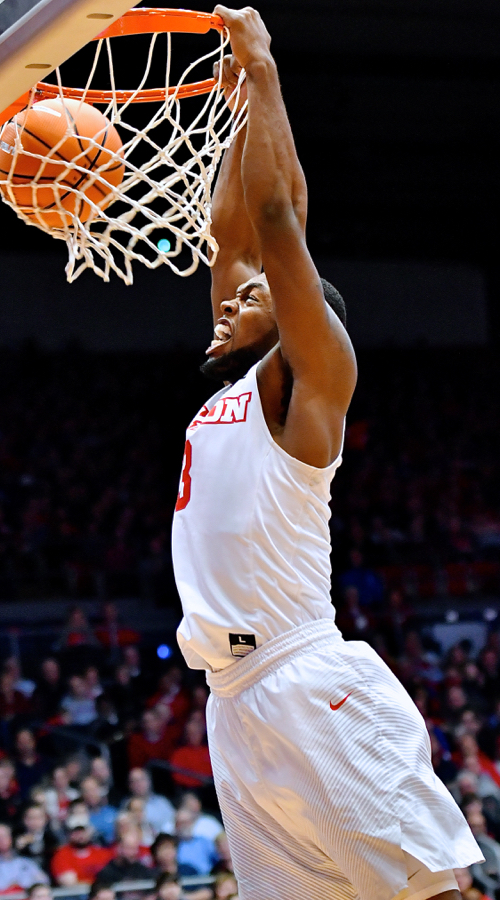 “I have no clue if I’ll start,” he said. “I’m going to have to ask a lot of my teammates if I can have their tickets.”

“When you play a team as talented as Auburn you have to sustain what you are doing for 40 minutes,” said Grant. “We talk about beginnings and endings. In the beginning we were too sloppy (five turnovers) and too anxious (1 for 9 shooting). We were able to recover (from the 11-2 deficit to the 15-11 lead), but at the end of the half we had another one of those little periods that set us back.

“We were able to settle down in the second half but Auburn was able to sustain a double-digit lead and they counter-acted everything we did,” Grant added. “But when you look at 10 threes for them and 13 offensive rebounds and 19 turnovers for us it is going to be difficult to beat a team as talented as Auburn.”

It was an off night scoring for UD’s Josh Cunningham, who got off only six shots and scored six points, but he did shag 11 rebounds. Darrell Davis led the Flyers with 18 points but was 4 of 13 from the field. Crutcher had his 15 and the only other Flyer in doubles was Trey Landers with 12. 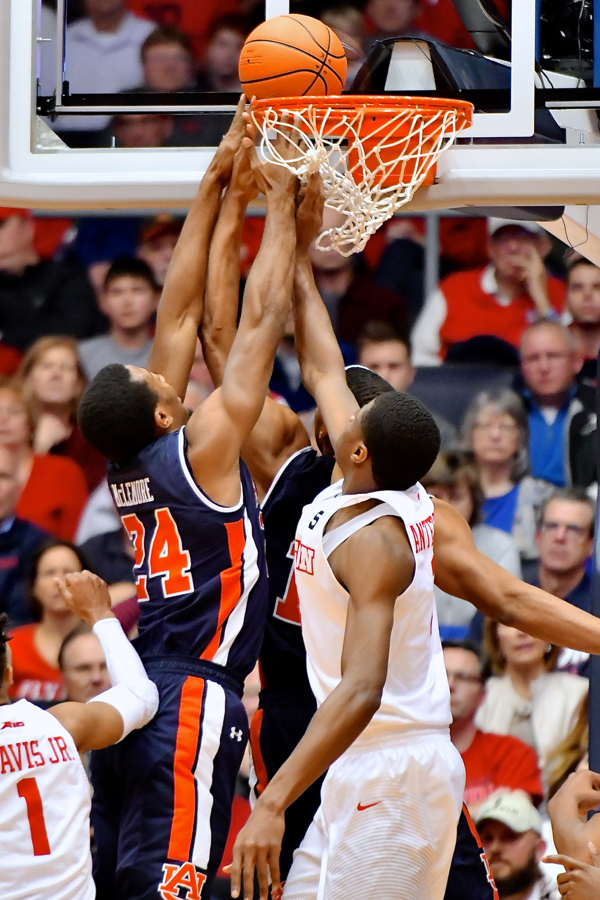 UD Flyer Kostas Antetokounmpo battles a pair of Auburn Tigers at the rim. 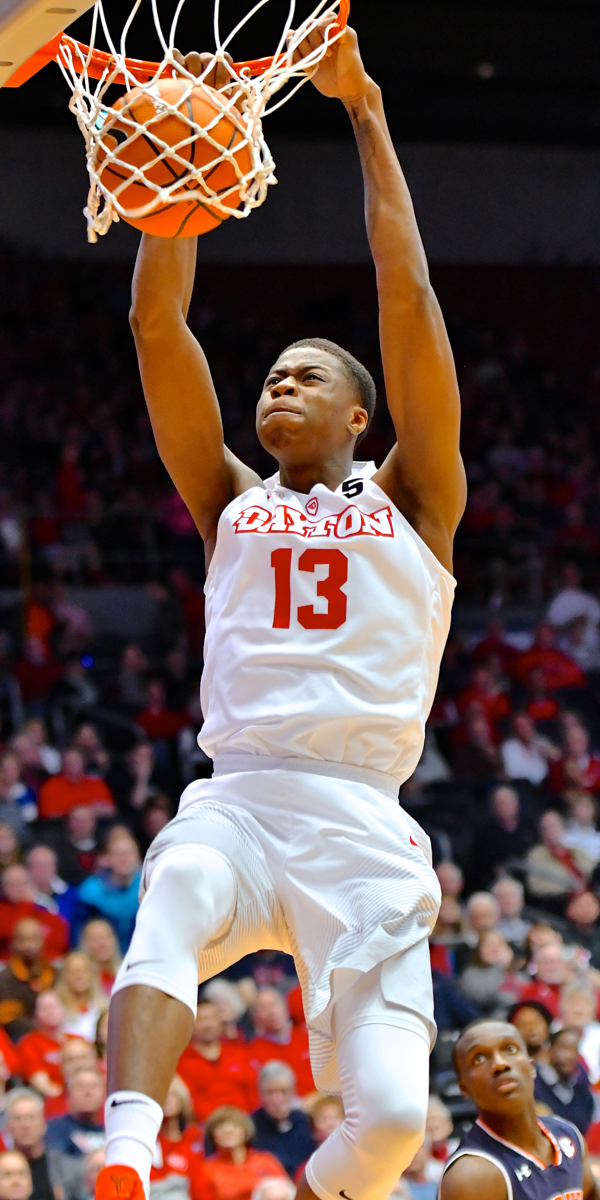 Kostas Antetokounmpo (#13, above), and as easy as two points can come in basketball. (Press Pros Feature Photos By Julie McMaken Wright)