Football Finals Like Back To The Future For Players, Fans, OHSAA

Despite any questions and complaints about competitive balance, this weekend’s football Final Four looks a lot like that to which we’ve grown accustomed…which leads you to won if some traditions aren’t bound to die hard.

As I write frequently, I love the weekend emails from football ‘fanatics’ and loyal readers of this site from other parts of Ohio.  We’ve apparently earned their attention, and respect, having shared information about local teams since PPM’s inception in August of 2010.

This weekend was no exception, with both Minster and Marion Local qualifying for next weekend’s Final Four in their respective Divisions, VII, and VI.

Minster will play a strong Cuyahoga Heights team on Friday morning at 10 am;  and Marion will come back twenty four hours later to face perennial finalist, Kirtland, at 10 am on Saturday.

Minster will be making its third Finals appearance in four years, having beaten Kirtland in 2014 for the then Division VI crown.

And Marion will be making its sixth appearance in the past seven years, their 17th since 1999, and will seek their 10th state title in Divisions V, VI, or VII.  Only one Ohio school now boasts more state titles than the Flyers, that being Cleveland St. Ignatius, who has eleven, all-time.  Currently, Marion is tied with Moeller for second, with each having nine!

Despite any questions and issues with the first-year competitive balance issue, this tournament is NOT that much different from recent years, featuring perennial favorites in nearly every division.

Division I, actually has a very familiar flavor, featuring Pickerington Central (Columbus) and Mentor, who have both been there plenty of times in the past.

The Division III final is made up of ‘newbie’ Tri-Valley versus Trotwood, another perennial seeking its second title and third, overall, for the GWOC.

Division V is decidedly interesting, for the inclusion of newcomer Wheelersburg.  The Pirates will play in the title game on Friday afternoon at 3 pm against top-ranked Pemberville Eastwood, and they seek their first state football title in 27 years, last winning back in 1989.  If you want to see something that will rival MAC interest and support, hang around after the Marion Local game (if you’re allowed) and see how many people from Scioto, Lawrence, and Pike counties turn out for that game.  And we have a covering interest because there is a lot of PPM readership from those areas.

But the number one question this weekend is about competitive balance, and whether we think there actually is, or WAS, any kind of effort to limit the number of MAC teams that could compete for titles, as has been the case in years past.  In 2014 they won three of the seven, and narrowly missed doing it again in 2015.

To answer that question we say…decidedly NO.  We’ve never actually written that there was a conspiracy of any kind;  we just reported the conversations of others who are naturally distrusting of any kind of legislating body in modern culture.  Nobody trusts government of any kind, anymore. 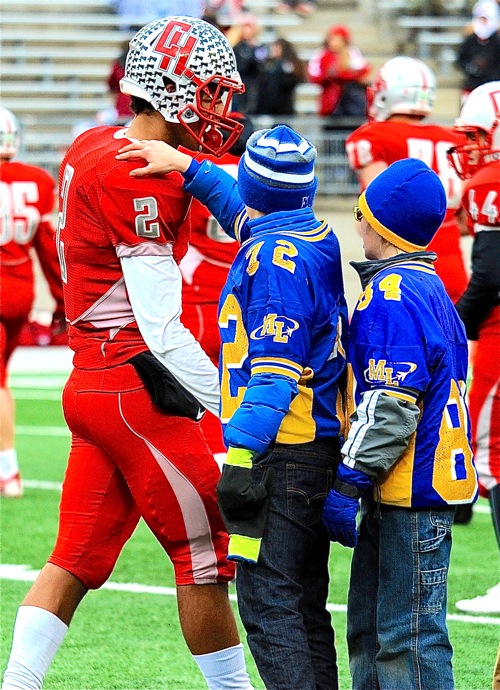 They know how to act…Marion Local has won so many times that even the ball boys know to congratulate and console the opposing players.

The number two question from those who follow local football from the Cleveland area (Norwalk and Cuyahoga Heights), and from Lake County (Kirtland), is…are Minster and Marion Local as good as usual, different, or even better?

The answer we would have, here, is yes to all three.  A leopard really doesn’t change its spots, and in the case of Marion you might even make the point that their running game is more diverse and balanced than anytime since Tim Goodwin showed up.  Never since I’ve covered them can I remember that kind of depth at such a critical position.

In Minster’s case, like many other teams at this weekend’s championships they have that one player who exemplifies leadership and competitive will that’s over the top.  He’s quarterback Jared Huelsman, about whom I’ve already written that in a league of good football players…he stands out as the best of the best, on either side of the ball.

So for the OHSAA’s interest this year’s tourney may not have as many new faces as some from the competitive balance camp would like, but Tri-Valley (Dresden, Oh) and Wheelersburg certainly provide underdog rooting interest for those who want at least a couple of new, and different, champions.

From a logistics standpoint, I’ve always been on record as having said that the championships are best suited for the Stark County community.  After all, that’s the cradle of Ohio High School football with past legendary programs like Canton McKinley and Massillon – and individuals like Paul Brown and Earle Bruce;  and even the cradle of professional football, with the Pro Football Hall of Fame being just a rock throw from the games themselves. 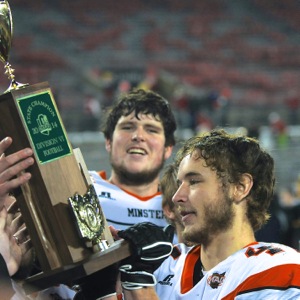 But the drive and the accommodations are not central, like Columbus, and some have written to complain, saying they will not go back until the event is returned to central Ohio.  To each his own, of course, but I’m telling you that the average crowd for a state tournament game cannot be appreciated in 105,000-seat Ohio Stadium.  The newly renovated Benson Stadium (used to be called Fawcett) provides a much better atmosphere…just, that there is no parking.  They’re saying to park at the local fairgrounds this year and take a shuttle.  Personally, to me that’s saying that local authorities are conceding that they don’t have any better facilities now over what they had before, and that yes…this event is destined to eventually end up back in Columbus.

The other point I make about the tournament in recent years is…I question how you get ready to play football at 10 am in the morning.  I mean, C’MON MAN…it’s just not done.

Yes, there’s a schedule to keep.  And yes, there’s but one field now, over the use of Paul Brown Stadium in neighboring Massillon, previously.  But it’s really asking a lot for anyone, of any age, to roll out of bed that early and be ready to hit in the middle of the morning.  I personally don’t get in from the night before until about 7 sometimes, so it’s even a lot to ask of the media – or at least some media!

But despite those small annoyances, it’s the crown jewel event of the OHSAA, and I’m still consistent with what I’ve written in the past…that no one does their state tournaments better than Commissioner Dan Ross and his legion of deputy commissioners and assistants.  I know, because I’ve been in other states, and it’s just not the same.  They make it special for the kids, first and foremost, and the experience of competing to be a champion…whether you do it every year, like Marion Local – or once in a lifetime, like Tri-Valley.

Again, in 2017, the tournament is rich in Ohio football tradition, which some won’t like.  But just try to beat the system…when you can’t beat ’em on the field! 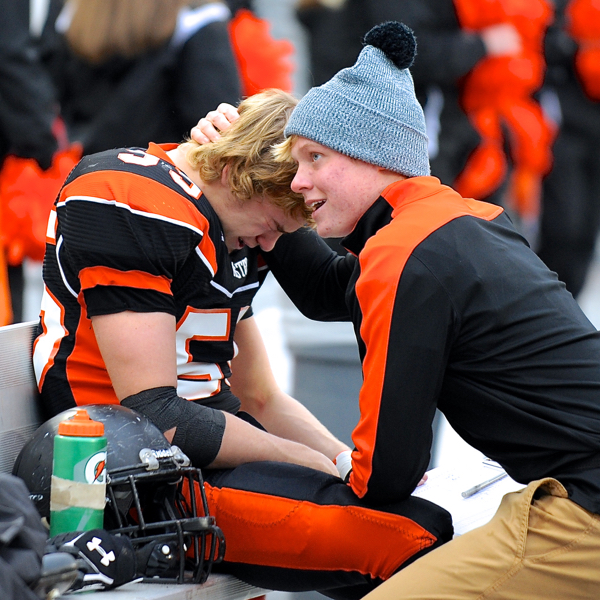 They say you're lucky to get there once, so the emotional letdown of the moment can be devastating. But Minster will be making its third trip to the Finals in the past four years, with a title to their credit in 2014. (Press Pros File Photos)