Marion used its punishing ground game to push past Liberty Benton and set the stage for a rematch with Kirtland and their tenth state title in next week’s Division VI final.

Wapakoneta – It wasn’t supposed to look so easy as the 31-13 final score might indicate.

But as Liberty Benton head coach Tim Nichols would afterwards attest to, “You’re climbing a pretty steep hill when you play Marion Local in the state semi-final.  They’ve been here before.”

And in truth, perhaps it wasn’t that easy.  But when you can rush for 295 yards, and distribute those yards through six different running backs, basic football dictates that more often than not you’re going to have success.

And that’s exactly how Marion Local dispatched a fine, athletic Liberty Benton team Friday night to advance to the Division VI state final game next weekend for their sixth time in the last seven years.  They ground-pounded the Eagles.

Even more impressively (if there’s any means left by which Marion Local can yet impress), next Saturday they’ll be seeking their tenth state title in the last 19 seasons under head coach Tim Goodwin when they play Kirtland in the Division VI title game.

On a night where a stiff wind made direction and field position important, Marion used that ground game to offset negative field position, eat the clock, and keep the ball out of the hands of Liberty Benton’s athletic and talented offense, led by quarterback Austin May.

They scored in their second possession of the game at 7:34 of the first quarter on a nine-yard pass from Nate Bruns to Nick Tangeman, and then converted a two-point PAT when Liberty Benton jumped off-sides on the conventional kick attempt.  7-0, Marion.

At 4:49 of the second quarter Alex Klosterman converted a 22-yard field goal attempt to stretch their advantage to 10-0.

While the defense kept Liberty bottled up, Marion drove the field again before the half, and tacked another touchdown on the board with a 9-yard touchdown on a screen pass from Bruns to tailback Nolan Habodasz.  18-0, Marion, at the break. 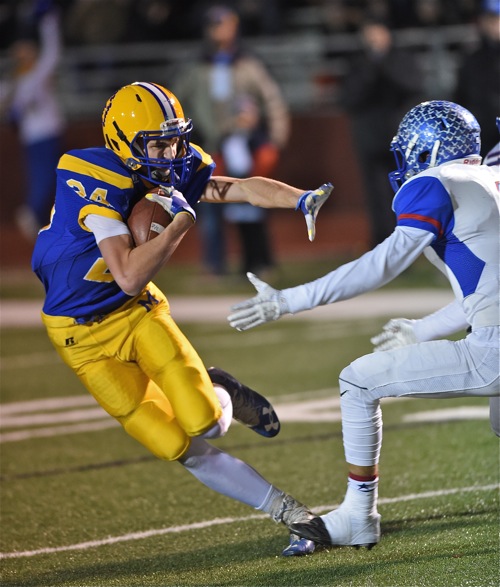 It became very routine-looking at the 5:46 mark of the third quarter when fullback Alex Partington bulled over on fourth and goal from the one yard line to extend their margin to 24-0.

But hope, at least for the moment, was restored to Liberty Benton just 90 seconds later when the Eagles finally scored on a 32-yard touchdown throw from May to teammate Will Poling to cut the deficit to 24-7.

Just as quickly, Marion came back to score at 1:03 of the quarter, when Habodasz scored his second touchdown of the game on a 15-yard run.  31-7, Marion.

Time, and opportunity, simply ran out on the 12-1 Eagles, even while scoring with three minutes remaining in the game on a 20-yard strike from May to Conor Greer to make it 31-13.  But the two-point conversion attempt was batted away, and a successful on-side kick attempt got them little more than four more downs, as May was buried under a ferocious pass rush on fourth down.  Their season, and hope, came to an end.

The hill, to paraphrase Tim Nichols, was simply too steep, as Liberty seemed to play as if they had no margin for error.  They broke down defensively, committed too many mental mistakes, and emotionally let the game, and Marion, get into their heads.  A pair of penalties – a targeting call on a hit to Flyers receiver Nick Tangeman, and a hit out of bounds on quarterback Nate Bruns – helped extend drives and eventual scores.

“We made mistakes we don’t usually make,”  said Nichols afterwards.  “We felt good all week that our kids were mentally ready to go.  We weren’t in awe of them, but as soon as we kicked off we had some uncharacteristic things happen that we hadn’t done since week five.  We made some bad decisions.  We blew some assignments;  we just didn’t handle the moment very well to start the game.  And credit to them, they did handle it well. 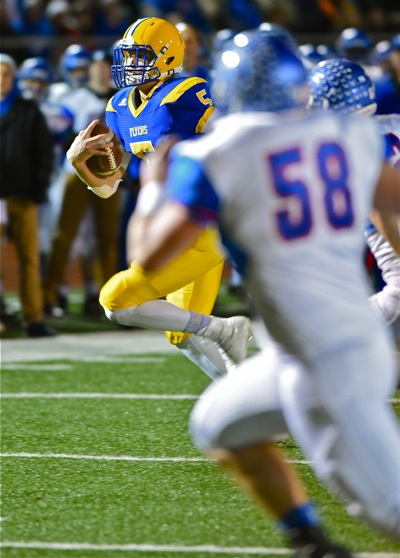 Quarterback Nate Bruns extended drives with his passing…and his ability to run.

“We had some good field position in the first half and we didn’t take advantage of it, and again, credit to them.  When you play them (Marion) they’re going to bleed the life out of you by leaning on their big kids and that running game.  And that’s what it was.  We’ll look back on it as a great year, but at the end of the day they won the line of scrimmage and we hurt ourselves with some bad penalties.”

The big running game he spoke about was helped early by some key receptions by junior Nick Tangeman, who finished the game with three catches for 48 yards…but they were catches at critical times that made Liberty Benton respect the passing game, and gave elbow room for the likes of Habodasz (144 yards), Jack Buening (42 yards), Partington (28 yards), Matt Rethman (42 yards), Nate Bruns (34 yards), and Brandon Fleck (25 yards).  The passing game was modest (7 of 16 attempts for 87 yards), but it did the trick.  It made the Eagles think twice about stacking the box.

“We had some guys open, and Nate threw it out there and we just made some plays,”  said Tangeman, modestly.  “We expected them to be a handful because they had a lot of speed and talent.  But we’re going to Canton now and we want that 10th title for Coach Goodwin.  That would be a big accomplishment for him, and us.”

If Liberty let the game get to them, Marion seemed to handle it as if they’d been there a dozen times before.  And in fact, they had been, and played again Friday like past teams with more talent, less talent, and teams about which it was hard to gauge just how talented they were.  When it comes to week 14 of the season, every Marion Local team pretty much looks, and plays, alike. 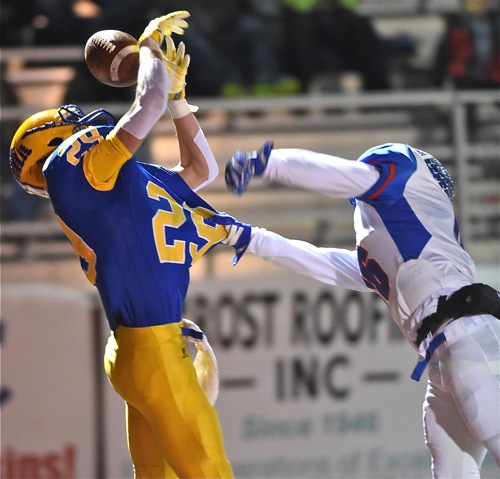 It is what it is…receiver Derek Ruhenkamp got no ball, and no call, with this first half pass attempt.

“They were a good football team,”  said Goodwin of the once-beaten Eagles.  “They drove the ball on us in the first half and we were able to get stops.  But that was one of the best offenses – if not the best offense – we’ve seen all year.  Our defense played hard.  We had a couple of breakdowns here and there, but we’re moving on.

“We came in thinking we had an advantage up front, but they played pretty darn well so we had to go to plan B a little bit (the passing game) to get some things going.  That helped because in the second half we were able to get the running game going.  But Liberty Benton’s a good team.”

Some numbers:  Marion won it with 383 yards of total offense (295 on the ground), while holding Liberty Benton to 304…and just 34 yards on the ground.  The Eagles did their damage late, and through the air, when it was too little, and too late.

By week 14 people will figure you out, so it becomes necessary to show some new things, no weapons, and threats that opponents haven’t seen.  Such was the case with Nate Bruns Friday, who pulled the ball down on at least four occasions to run for 34 yards, extend drives, and again…give the defense reason to hesitate.

“Nate saw some things open up tonight in coverage, and he just went for it,”  said Goodwin.  “He’s done that before, but not lately.  He’s an athlete.  But we haven’t had that one guy to run the ball, although Habodasz was coming into that before he hurt his ankle.  So we just try to find someone who gets hot.  When they cool off we go to someone else.”

While he admits that numbers of titles aren’t necessarily that important, Goodwin will not deny that the excitement to back to Canton next week in search of title #10 is exciting.  But the goal moments after his latest semi-final win…was simply to get to the title game and play as well as Marion CAN play. 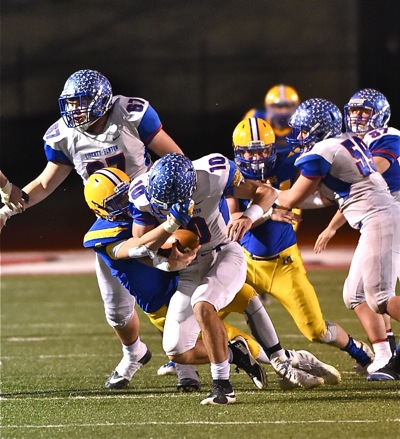 The defense and Henry Keller (#4, above) crashed in on Liberty quarterback Austin May’s last attempt to score.

“The numbers aren’t that important to me, you know that,”  said Goodwin.  “But we do want to play our best.  The last two years we played well, but not our best.  This time we want to go over there and play a good 48 minutes.  We’re going to prepare like heck and try to do that.”

And they’ll need to prepare for their best, as they’ll meet Kirtland again, the team to which they surrendered a commanding second half lead in the 2015 title game, denying Goodwin and the Flyers a fifth consecutive title.  Added motivation?

“Yes, but this year they’ll be a whole new group,”  he said.  “I think last year would have been a different story, but we remember.  Kirtland’s a great program and our guys will be focused on that all week.  It’s exciting to go back because every coach wants to take his team to the championship game.  And very coach wants to win.  We’re not going for anything else.  But you can’t get too caught up in certain things.  You just keep your nose to the grindstone and do what you do.”

While he doesn’t count titles, Goodwin does count this year’s achievement among his most satisfying groups.

“We’ve had talent that you can do some things with,”  he reminds.  “And we have a great group of coaches so I don’t have to worry about that, either. It’s just been fun.  We just do what we do.”

Which if you’re a betting man gives you some insight on just how focused, and how close they’ll get to that grindstone in preparing for next week.  Goodwin forgets nothing, including the galling way in which they lost that title in 2015.  He may not do numbers…but be assured.

He remembers the ones that got away! 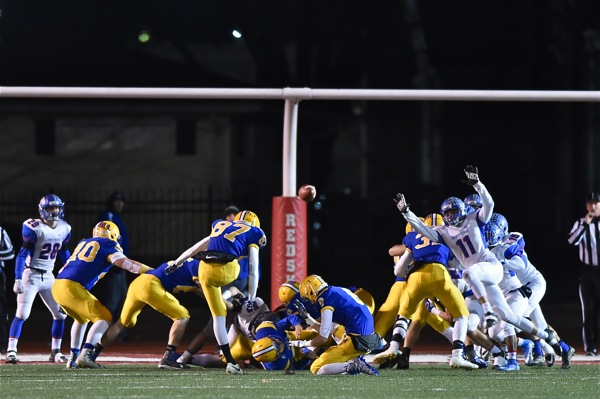 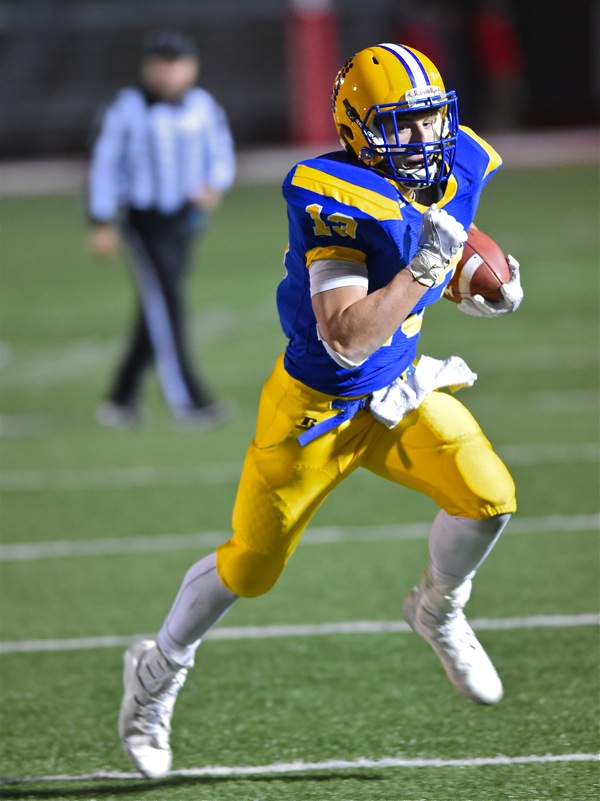 Junior Nolan Habodasz anchored the running game, with 144 of a team total of 295 rush yards in the semi-final win over Liberty Benton. (Press Pros Feature Photos by Sonny Fulks)