If You’re Talking About Coach Of The Year….?

Our annual consideration of which area high school coach moved the needle the farthest in terms of accomplishment and improvement in 2017 comes down to a handful of worthy candidates.  But one, in our eyes, stood out over all the rest.

We actually sent ten emails to friendly football geeks and loyal PPM readers to ask their opinion.  And the question was:  Of the area football coaches in the Press Pros market this year, which ones impressed you the most as to talk about them in terms of coach of the year honors?

We heard from nine of the ten.  And, we got some outstanding suggestions in terms of which of those men (in the words of one) moved his needle the farthest.

Geron Stokes got a lot of high marks at Minster (9-4), for enduring a critical four-game losing stretch in the middle of the season (all against MAC opponents), righting the ship, and making the Division VII playoffs to play this weekend in the state semi-final game against undefeated Norwalk St. Paul.  Stokes’ Wildcats presently own a five-game win streak, and at a time of the year when a winning streak matters most.

Miami East’s Max Current got mentions for the consistency he brings each year to the Viking program, including 2017 when he usurped the league title from Covington to finish 9-1 and make the Division V playoffs.  They lost in the first round to Reading.

There was mention of Lehman Catholic’s Dick Roll, of course, because the Cavaliers annually start slow, finish strong, and end up in the Division VII playoffs, where they lost to Delphos St. John in the regional semi-final round two weeks ago. 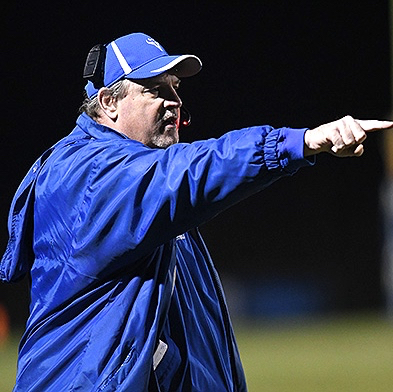 Speaking of St. John, the venerable and respected Todd Schulte got mention, as well, for guiding the Blue Jays back to the post-season this year with a 6-4 regular season mark.

One in particular wrote  to make the case for Troy’s Matt Burgbacher.  “It’s hard to lose as much as they did last year, regroup, and come back to win 7 games and make the Division II playoffs,”  he wrote.  “Matt and Charlie (his dad) did it with mirrors and Jaydon (Culp-Bishop) this year.”

And Fort Loramie’s Witt Parks was singled out, “For taking a team into a new and unfamiliar conference and finishing 8-2,”  wrote one.  “Not as easy as it looked.”

But our own unction, and it was supported by many of those who took the time to write, settled around Sidney’s Adam Doenges, who reassembled the Yellow Jackets after a disastrous injury-riddled 2016 campaign, used the considerable offensive talents of players like Andre Gordon and Isaiah Bowser, and promptly took them to their best record in a generation (9-1), and two games deep into the Division II playoffs.  The ‘Jackets season came to an end two weeks ago against three-time consecutive state champion Cincinnati LaSalle.

Among the necessary attributes to be a head coach…patience has to be at the top of the list, along with consistency, and Doenges certainly benefits from generous helpings of each.

Originally an assistant under then coach Dan Cairns, Doenges endured a decade of rebuilding and retooling, waiting for that ‘cycle’ of athletes that always spells success over Xs and Os.  He took over the Sidney program in 2011 and began to ‘move the needle’.  2017 certainly marked his best season as the ‘Jackets captured the football fancy of a community long-starved for winning and packed the home stands on a regular basis – with wins over old rivals St. Marys, Bellefontaine, Piqua, and Butler.  Then they punctuated that success by making the playoffs for the first in a generation…and winning their first-round game over Belmont. 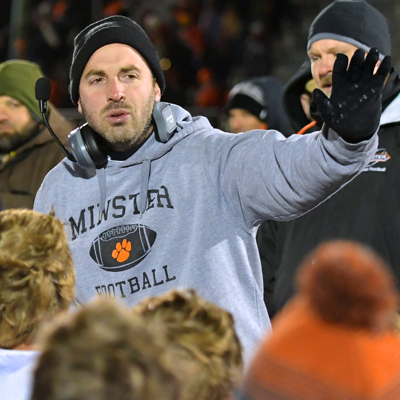 Mister Coach Geron Stokes survived a four-game losing streak to guide his Minster team to this weekend’s state semi-finals round.

“It’s been fun,”  said Doenges earlier this year, following his team’s heart-stopping 49-42 win over Tipp City.  “You can’t compare this team to those teams of the 30-0 era (under then coach Dave Haines), but it’s a different generation of football now.  In fact, I don’t even know how many of those guys are still alive.

“But it’s fun when we’re getting media attention now that we haven’t gotten in years.  We have our games on Thursday night TV.  The community has supported us;  and we now have college coaches coming to look at our practices.  And, we have legitimate Division I prospects in the program.”  Including  Isaiah Bowser, who will attend Northwestern University to play for the Wildcats next fall.

All this comes, they say, to those who are patient and consistent to wait for the football culture to reflect the personality heading the program, and as much as anything else he’s done, Adam Doenges has been the right personality for Sidney…and at exactly the right time.

“It’s been interesting, and we’ve kept it interesting,”  laughed athletic director Mitch Hoying, following that same Tipp City game.  The Yellow Jackets made it that way by simply outscoring most of their opponents this season, finishing second only to Trotwood in total yards and points (4,720 yards, and 412 total points).  They averaged 41.2 points per game.

Congratulations to Sidney’s Adam Doenges, our 2017 Press Pros Coach of The Year in area football!

“The Spot” is proud to be the official sponsor of the 2017 OHSAA State Tournaments on staging.pressprosmagazine.com.

Sidney's Adam Doenges garners Press Pros honors for Coach of The Year by guiding the Yellow Jackets to a 9-1 regular season mark (10-2) overall, and a playoff win over Belmont. (Press Pros File Photos)