Readers’ Thoughts On Who Plays Whom, And Why…!

Some interesting thoughts post-weekend on the regional finals in football – who won, public versus private, and what competitive balance could ultimately mean to your kids.

We touched a nerve among readership with last Thursday’s column on competitive balance, and the bittersweet issue of Marion Local and Coldwater being forced to meet in the Division VI regional finals on Friday.

According to the metrics, that piece was shared far and wide, and sparked more than a few comments of personal opinion on public versus private…and even, public versus public in this case.

Not surprising, there were several that took up the tired old argument that parochial and private schools have had the advantage too long, regarding ‘recruiting’, or ‘raiding’ the public schools for their best athletes.

Not surprising, there were those tho played the ‘class system’ card, claiming that private schools get the cream of the crop without having to deal with the cultural problems that plague many public schools – of drugs, funding, single-parent or no-parent homes…and poverty.

And not surprising, every one of our emails we received was centered on sports. There was no mention of the private schools raiding the publics for the best math student, or the best trumpet player. It was all about SPORTS!

We had some that went to great length to report the numbers from last weekend’s state regional finals – to make the point (if there is a point) that competitive balance is either an over-reaction…or, that the outcome in sports is little more than a cycle that comes and goes between both public and private schools.

For example, Chris Cron, a devoted reader from Celina wrote this:

“Just looking at the Regional final results across the state last night and took notice of how the private schools fared.

It was Division I publics that were the driving force behind all those CB initiates because they were tired of the private’s domination.  Well, in the first season of CB the whiners will get the result they desired as Division I has an all-public Final Four.

Looking at all the matchups, it is possible the privates could be shut out entirely which will make the whiners crow even more.

I did not agree with the CB proposal.  My feeling is that if you want to beat the big boys, you need to put in the work required to get there.  Gold trophies are EARNED, not GIVEN.  And while CB is largely responsible for creating the Marion-Coldwater matchup last weekend, I don’t believe Coldwater would have fared well in Division V, either.  They just did not have the horses this year. And, any school would be proud to have the record of Coldwater for the past twenty years, finish second in their league, have a 9-4 record, and play in a Regional Final as one of the last 8 teams in their division.”

Cron is obviously from the camp of: Let me beat the best talent possible if I’m going to win a state title, regardless of how they get that talent. It makes the accomplishment more complete. And indeed, Coldwater did beat a private school, Canton Central Catholic, for the Division V title in 2014 and ’15 – and Cardinal Mooney in 2005 and ’07…and there was never a mention then of how players got to be at those schools.

But Jack Remmerswaal, from Lorain County, had another view:

“It’s obvious to me that as our culture continues to divide along class lines, that the makeup of our schools is bound to follow. And there are going to be some that attract the elite student athlete in terms of talent and privilege. For this reason there has to be some kind of action taken in competitive balance to level the playing field, regardless of private, or public – because it would seem that there are some publics that actually come close to a ‘private’ standard. Five titles in six years (Marion Local) makes for a very compelling argument.”

That is, Jack, unless you’ve ever actually driven down the main street of Maria Stein, Ohio – or taken a drive down route 716. Take the time, and then write about privilege.

There were several others, on both sides of the argument over competitive balance.  Most of the pro-CB responses read with the overtone of “we can’t win the way things are now”. Something has to be done.

The antis, like Chris Cron, were pretty much consistent to leave things alone, and focus on bigger, and more important issues – like how to make sports and competition available to those who can’t afford it.

My own view is this. We’re a country that prides ourselves on the freedom to do whatever’s best for our individual good, and the good of our families. And, we’ve fought wars to ensure those freedoms, which include where you send your kids to school.

For that reason I’ve always been a supporter of private and Christian-based schools because I know – I know – that parents send their kids there for reasons other than football and basketball. They send them there because they embrace and trust the culture and values of those schools.

And, I also know that schools like Coldwater and Marion Local, without being private or parochial, embrace many of those same values…because they’re taught in the homes of the taxpayers who support those schools.

And last, those same people accept that the same values will manifest through sports and competition…of any kind! Remember, I said that the only reason for there being a competitive balance issue is over sports. No one ever complained about Marion Local because they have the best trumpet players, or the best math students. No, it’s always about football when other schools in Region 24 talk about any kind of Marion advantage.

Like Chris Cron, I cannot help but agree with him that winning anything should come against the highest level of opponent possible. And, consider that it’s not over when you graduate from high school. Competitive balance exists at every level of life. Some would call it affirmative action!

But good is good, and when I played forty years ago I never wanted to pitch against Otterbein (no offense to Otterbein). No, I wanted to play Minnesota and Michigan, knowing they had the best talent in the league. There were days when I had success; and there were days when I didn’t. But I never asked anyone if they came from a public or private school.

It’s also my view that ultimately the issue and pursuit of competitive balance will actually DESTROY high school sports as we’ve known it. What competitive balance will do is erode the natural competitive instincts of those who play, knowing that any advantage held by an opponent has been, at least to some measure, minimized.  We’ll teach kids to believe that in order to win the other team has to look just like you.

We’ll legislate a lesser standard. We’ll water down what “champion” really means. In math they call it the least common denominator. You’re a champion, yes. But champion of what? 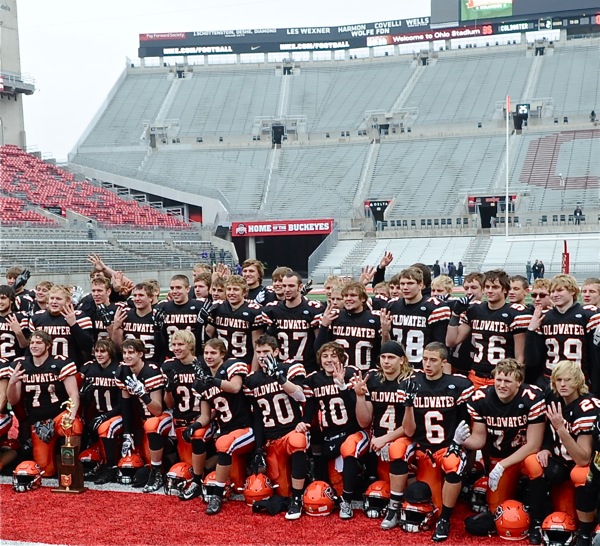