Hal: Dayton Flyers Bridge Collapses With A Loss To Valparaiso

The team’s motto this year was, “Build That Bridge,” but the bridge was never completed and collapsed many times this season for a lack of big plays at important and opportune times.  Passing was well-nigh impossible on this day fit only for a polar bear in a rain slicker.

VALPARAISO, Ind. – To the outside observer, the prize seems like something out of a Cracker Jack box or a stuffed raccoon from a carnival midway booth.

Both the University of Dayton and Valparaiso University football teams were 5-and-5 when they traipsed upon Brown Field Saturday afternoon for their final game of the season.

For Dayton, the mission was to avoid the program’s second losing season in 40 years, a tangible and worthy goal for this proud FCS program.

So who prevailed on this day of non-stop rain that cut like a knife on faces and hands and a 25 miles an hour nor’easter gale that howled like a hungry coyote?

It was Valparaiso’s victory at the end, an 8-7 win during which all 15 points were scored in the game’s last 14 minutes after 46 minutes of soccer — a lot of kicks and no scoring.
Dayton broke the 0-0 tie early in the fourth quarter on a 31-yard pass play from quarterback Alex Jeske to Adam Trautman, UD’s longest play from scrimmage all day.

Passing was well-nigh impossible on this day fit only for a polar bear in a rain slicker. Jeske completed only 6 of 24 attempts for 116 yards. He also carried 16 times, many on scrambles on called pass plays. His runs accounted for 83 yards. 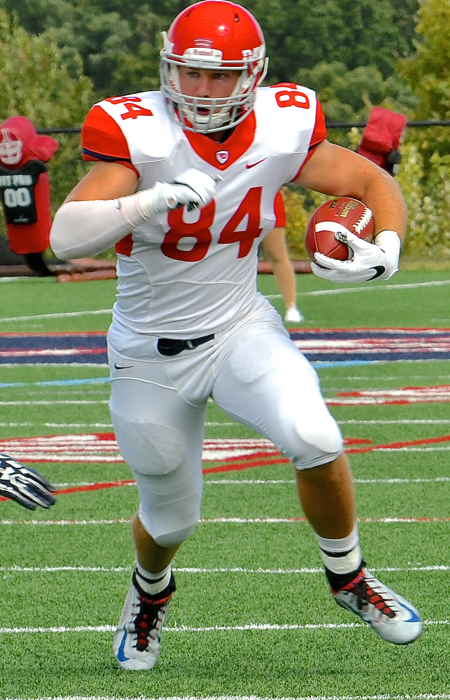 UD’s Adam Trautman accounted for the longest play from scrimmage of the day.

Jeske also fumbled three times and lost two and one came on a third-and-goal at the Valpo 1-yard-line midway through the second quarter.

And on the drive before that the Flyers had it fourth-and-three at the Valpo 17. Tucker Yinger’s lunge for a first down was a yard short.

It wasn’t any better for Valpo quarterback Jimmy Seewald, one of the Pioneer League’s best passers. He threw 31 times and completed 13 for 119 yards.

But he hit two big ones on the game-deciding scoring drive late in the game, a third-and-four completion for four yards and a first down to Jarrett Morgan to the UD 29, and on the next play a 28-yarder to Frank Catrine to the Flyers 1.

Catrine was extra special elated because he is from Springboro and played at Middletown Fenwick.

Morgan plunged over from the one for the touchdown and with 1:20 left it was Dayton 7, Valpo 6.

Would the Crusaders kick the extra point for a tie and risk going into overtime or even risk missing the PAT on this blustery afternoon and losing by one?

On the UD sideline, Flyers coach Rick Chamberlin told those standing near him, “They’re going to go for two, I just know it. That’s the way their coach (Dave Cecchini) does it, the way he operates, it is his mentality.”

And Chamberlin was as correct as a Jeopardy champion. Checchini went for instant gratification, a two-point try. And he unraveled a trick play, one made famous by former University of Florida quarterback Tim Tebow.

The ball was snapped directly to running-back Jarrett Morgan. He took two quick steps forward, as if he were going to run it. Then he stopped and threw a jump-pass completion to Ryan Clarke over the middle for the two-point dagger that stabbed the Flyers.

“Yeah, a trick play, but as soon as they lined up and I saw Morgan ready to get the ball I knew what was coming,” said Chamberlin. “We’d seen that play before. We were yelling out at our players but we weren’t able to get the right guy in the right place in time.”

The howling weather made it a hazardous afternoon for both sides on offense, a day of flailing and futility.

UD was 3 of 17 on third down conversion plays and Valpo was 4 of 16. Both were 1 of 3 on fourth down. The Flyers were in the red zone three times and came away with no points because of Jeske’s fumble at the one, Yinger’s failure on third-and-four and a missed field goal by Adam Waltz. 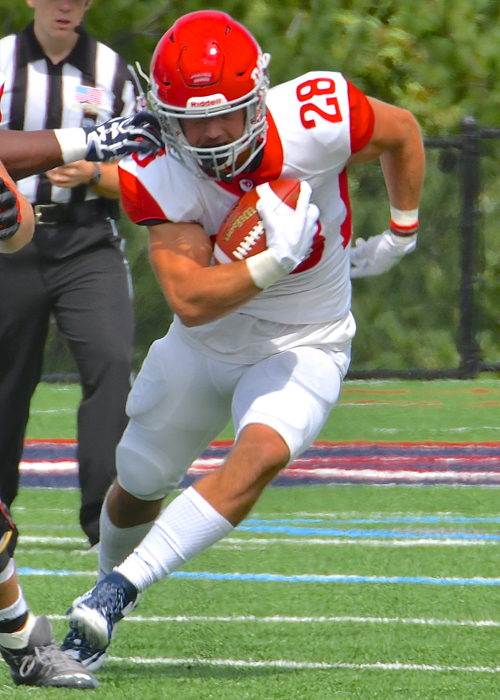 Tucker Yinger finished the year as the Flyers’ most dependable running back.

Chamberlin has been associated with the UD program for 40 years as a player, assistant coach and head coach and this was only his second losing season. And, he said, the conditions Saturday was the worst ever.

“I told my players after the game, in my 40 years as a player and coach I have never been in conditions like that,” he said. “It was wind, it was wet, it was cold — all those things put together made it a miserable day.”

And losing makes thawing out the drying out take much longer.

The conditions, of course, forced both team to toss game plans onto an open flame and as Chamberlin said, “It was very tough. You couldn’t complete passes, on both ends.

“But as it has for us most if the season when we lost when we had opportunitiers we didn’t make them work,” he said. “We did not take advantage of those chances. We missed that field goal, we fumbled after we stopped them on a drive. That seemed to be the theme for us this year.”

The team’s motto this year was, “Build That Bridge,” but the bridge was never completed and collapsed many times this season for a lack of big plays at important and opportune times.

Without injured quarterback Alex Jeske, the Flyers began the season 1-and-4. After his return the Flyers went 4-and-1 a chance to finish off a winner. But Mother Nature intervened and turned Jeske’s fingers into icicles Saturday.

“Bunker’s” is proud to sponsor coverage of GWOC sports on Press Pros Magazine.com.

“In big games, in tight games, we just didn’t make plays when we need to make them,” said Chamberlin. “And it was both offensively and defensively.”

And it was no different Saturday.

“When Adam Trautman made that big touchdown catch on a great call and a good play I thought we were in business,” he added. “But we just had too many dropped balls.”

For Valpo, in addition to forging their first winning season since 2003, it was the Crusaders first win over the Flyers after 13 straight losses and only their third win against UD in 27 meetings. 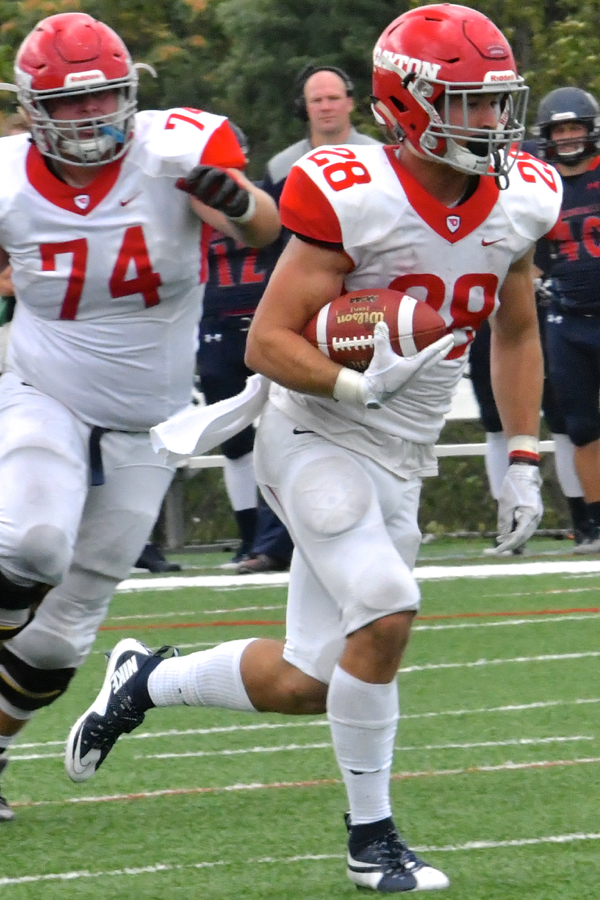