It fell far short of expectation.  Or did it?  True to form, Marion flexed some championship muscle against Coldwater, eliminating any question about competitive balance in Region 24, Division VI.

Sidney –  Coldwater’s Chip Otten should have seen it coming. Omens, you know, come in all shapes and sizes.

And the opening kick of Friday’s Division VI regional final between Marion Local and MAC rival Coldwater proved to be just that – a powerful omen.  Marion’s Matt Rethman fumbled the kick at the two yard line;  scrambled to pick it up, looked upfield, saw some confusion in Coldwater’s coverage, picked his way to the sideline, found daylight…and he was gone.  Gone with the wind, if you please;  but more to what’s real, gone to next week’s state semi-final against Liberty Benton.

It was a 10-second, 98-yard opening to a complete, and utter domination of Coldwater, and an eventual final score that shocked everyone…33-0.

Marion’s defense was projected to be the difference in the game.  But in reality, it was the essence of the game.  The 33 points put up by the Flyer offense were purely complementing, while demonstrating that their power run game is alive, well, and diverse.

Coldwater, you understand, doesn’t get shut out very often, but the last three times they have been blanked have all come at the hands of Marion Local.

Or, if you’re into things that have never happened before…it marked the first time in team history when Coldwater was subjected to a running clock, for the final five minutes of the game!

“At least it came from a MAC team,”  said a disconsolate Coldwater fan.  “It would have really hurt had it been a non-conference opponent.”

Marion Local spread it out, as if to prolong the agony.  After Rethman’s opening touchdown, Nolan Habodasz scored at 1:25 of the first quarter on an 11-yard run.  PAT attempts continue to be an issue with Marion, as they missed both of their first two tries, before Alex Klosterman finally connected in the second quarter following Nick Tangeman’s 8-yard touchdown catch from Nate Bruns.  It gave Marion a 19-0 halftime margin, and Chip Otten must have had a sinking feeling.  The Cavaliers had a total of 66 first half yards.

Tim Goodwin came out in the second half and put the run game on display, first and foremost, scoring with Alex Partington at 5:22 of the third on a 3 yard run, and ran the clock out with a final fourth quarter drive on which sophomore Brandon Fleck finished things with an 18 yard run. 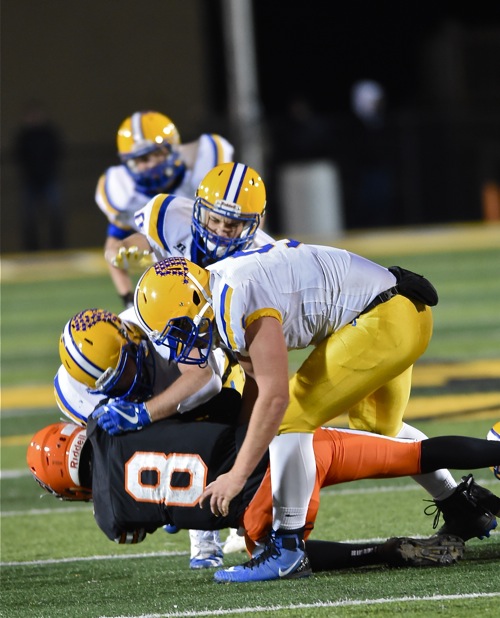 As impressive as the Marion ground game was (47 carries fore 246 yards), the Flyer defense was simply stunning, and a dark harbinger to future opponents.  They sacked quarterback Sam Broering five times (he had 37 yards passing), held Coldwater to just 4 second half rush yards (70 for the game), and limited what has always been a playoff highlight machine to just 103 yards total…for the game!

“They were impressive,” said Otten quietly.  “We knew it would be a tough game for us to win, but from the opening kickoff…gosh, he fumbled it and we had the coverage down there, but somehow he got through.  Offensively, we were up against a team that was just big, and physical, and stout.  They’re just a bigger, faster, and stronger team at this point.”

“I didn’t think it was going to go well after I botched it,”  said Rethman, a 150-pound junior.  “But I looked up and found a seam, there was one guy to beat, and when I got to the sideline I was just gone.  I tried to not to fall down before I got to the end zone.” 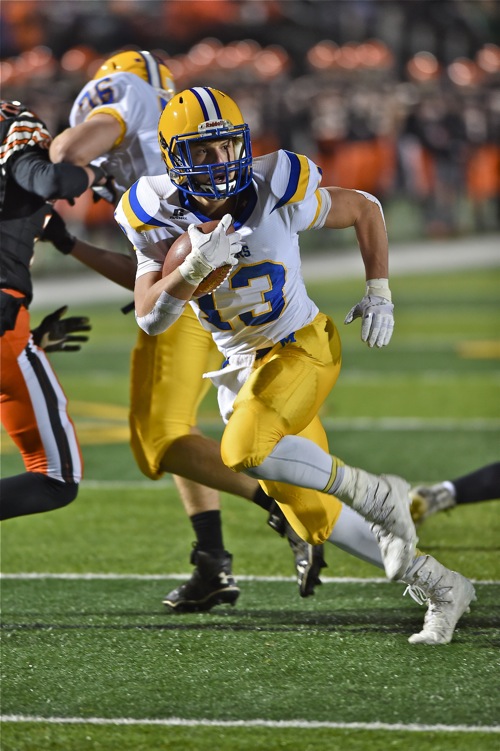 Nolan Habodasz looks for would-be tacklers on his way to a first quarter touchdown.

On a windy night Marion pretty much shelved the passing game, except for the one touchdown to Tangeman, electing instead to feed the football to Habodasz (53 yards), Rethman (59 yards), Jack Buening (38 yards), Fleck (30 yards) and Alex Partington, who led all rushers with 13 carries for 75 yards.

“It was something we prepared for going into the game,”  said Partington of the Flyers’ domination on the ground.  “Give credit to the offensive line because they just dominated.  The fact that we had so many guys get yards shows how much diversity we have.”

“Our defense played so well,”  said Goodwin.  “They kept turning them over on downs, and the offense just kept working and working.  We been playing really well, and I’ve said this a lot…that football is all about matchups.  We know we have to beat Coldwater to win the league and have a successful year, and our defense is designed to beat Coldwater – same as their defense is probably designed to beat us.  This year, and tonight, was a good matchup for us.”

To the question, pre-game, about competitive balance in Division VI, Region 24, there simply was no question by game’s end.  All the fuss, all the questions, and any issue with one team denying the other was simply dropped – unspoken.  By the start of the fourth quarter the Coldwater stands were emptying rapidly.

“It really wasn’t a big deal,”  added Alex Partington.  “We needed to win to move on, it was our opportunity to play them a second time and beat them twice, and that’s what we did.” 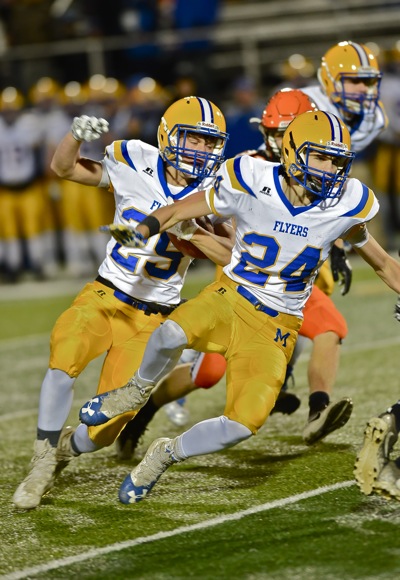 In fact, it marked the first time in Flyer history that Marion had beaten Coldwater twice in the same year.

“We have nothing but respect for Coldwater,”  added Goodwin.  “I appreciate what they do FOR us, by exposing weaknesses.  Chip and I have talked before and we always root for each other when we were in separate divisions.  But that’s out of our control now and tonight we accomplished something we’d never done before, and that’s beat Coldwater twice in the same year.  We put up that challenge right away this week.  Since we have to do it…let’s do it!”

They move on to play Liberty Benton next Friday night at Lima Stadium, and by the time Friday gets here the tournament fanatics who pile on the Marion bandwagon each year will have their seats picked out and dusted off.  Friday’s showdown with Coldwater was easily one of the state’s marquee games.

“I think about how blessed I am all the time,”  said Goodwin.  “To be where I am and coaching this program, because I have buddies who contact me and they’re trying to live and exist through the Marion Local experience and success.  And I tell them…I’m so lucky to be coaching this team, and to keep doing what we all love to do.  It’s just great to be together at this time of year and get ready for another game.”

No mention of winning another game, or another title, or anything superfluous.  That would hardly be the Marion way.  Just go home, enjoy it for a night, come back in the morning, and prepare for another game.  It’s Marion’s time of year.  Last week’s win is long forgotten.  Now, it’s all about the chase…again.

And, oh…beating Coldwater twice was a nice footnote, too!

*Tournament Update:  It has been reported to Press Pros that next Friday’s game between Marion Local and Liberty Benton will be played at 7:30, and at Wapakoneta’s Harmon Field, instead of Lima, as reported in this story! 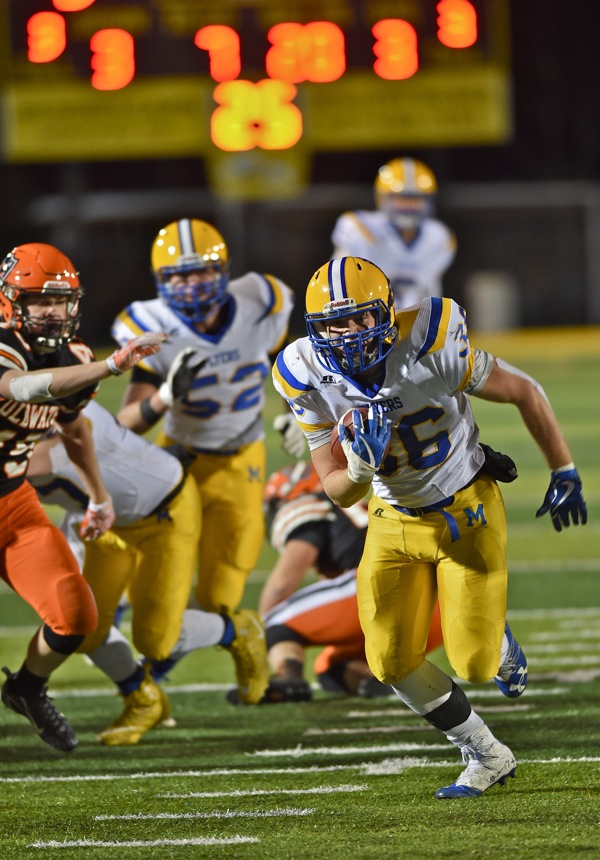 Alex Partington busts through the Coldwater line for part of his team, and game-high 75 rushing yards.