It was on full display this weekend…why New Bremen and Versailles captured two of the OHSAA’s four titles in volleyball – and why Marion Local and Minster may soon be doing the same in football.

In the media room of the Nutter Center prior to Friday afternoon’s Division III semi-final round of the OHSAA volleyball tournament, a pair of writers covering the teams from northeast Ohio inquired about Press Pros and our own coverage interests with the tournament.

“We cover the MAC Conference teams,”  I shared.  “Coldwater, Versailles and New Bremen.”

“Ah, the MAC,”  one said, with a smile.  “Marion Local going to win it in football again?  I saw them play against Cuyahoga Heights and Norwalk St. Paul.  I don’t know what they’re doing down there but it seems to be working.  They win it every year.”

Well, not every year…but it does seem like it to the rest of the state, apparently.  Since the league’s inception in 1972, the “MAC” has won 123 different OHSAA state team titles – an average of 2.7 per year!

And to his question about what they were doing down there, he soon got his answer if he paid close attention to the matches between Versailles and Tuscarawas Valley (28-0), and Coldwater and Independence (26-1).

It’s called competition, as every MAC coach stated at this weekend’s tournament.  No other league in the state features the consistent competitive standard of the MAC in volleyball, football, basketball and baseball, as evidenced by those 123 league titles won in the past forty-five years.

“It’s just such a privilege,” said Versailles coach Kenzie Bruggeman, visibly proud to add her name to the legacy. “The league’s come such a long way in OHSAA volleyball. And to beat the #1-ranked team today (Coldwater) to win the title, and to watch the #1-ranked team in Division IV (New Bremen) win their title, it says so much about the competition in our league and the respect we have for each other.”

“That’s the style I like to play,”  she said Saturday of the Cardinals’ aggressive style of serve and play.  “In our league if you let other teams pass the ball and get into system you’re going to have some long nights.” 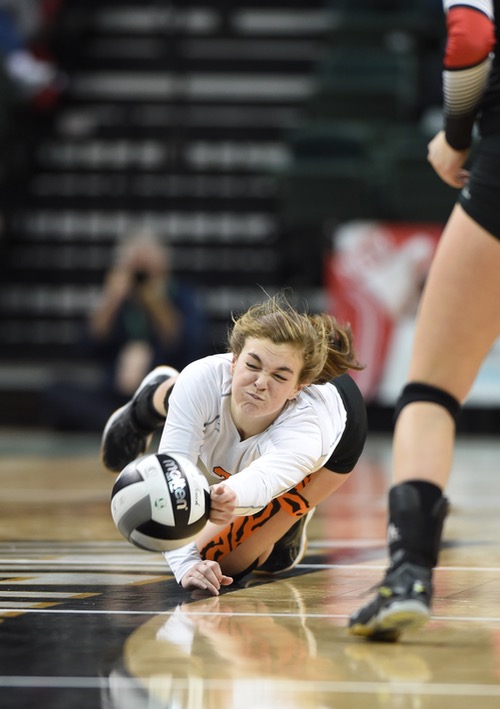 Versailles’ Kami McEldowney goes all out to save a point in the weekend’s State Finals volleyball action.

And if you’re not into the vernacular of volleyball – if you don’t understand what ‘pass’ and ‘system’ means – what Kramer is saying is she chooses to compete by beating others before they can beat her.  And it’s a standard of that league.  It’s consistent among its members, and it’s something not seen with consistency in other conferences around the state.

“We see some good teams in Stark County,”  said St. Thomas Aquinas coach Alyssa Thewes Saturday, following her straight-set loss to New Bremen.  “And we see some players like that (Cardinal standout Paige Jones).  But the way they played today was very impressive.  They were really good.”

And they prepared to be good on “title day” by playing the likes of Versailles, Coldwater, St. Henry, Fort Recovery and Marion Local on an everyday basis.

“We all prepare pretty much alike with our conference schedule,”  said Coldwater’s Nikki Etzler, following the Cavaliers’ Division III title loss Saturday to Coldwater.  “It makes you better (the competition), both physically and mentally.”

A point that was similarly addressed by Tuscarawas Valley coach Cortney Goodwin following Friday’s four-set loss to Versailles in the Division III semi-final round.  Prior to that match Tuscrawas Valley had not lost as much as a set…ALL YEAR!

“We didn’t play our game today,”  said Goodwin.  “And on another day when we do play our game I think we play them better.  But no, we do not see that kind of competition in our league on a regular basis.”

And a look at their record bears out her statement, with multiple lopsided wins in regular season against schools like Dalton, Malvern, Strasburg-Franklin, and Sugarcreek-Garaway.

Ironically, Versailles entered Saturday’s title match with Coldwater actually motivated by the memory of having lost to the Cavaliers, and having played badly, during the final week of conference play. 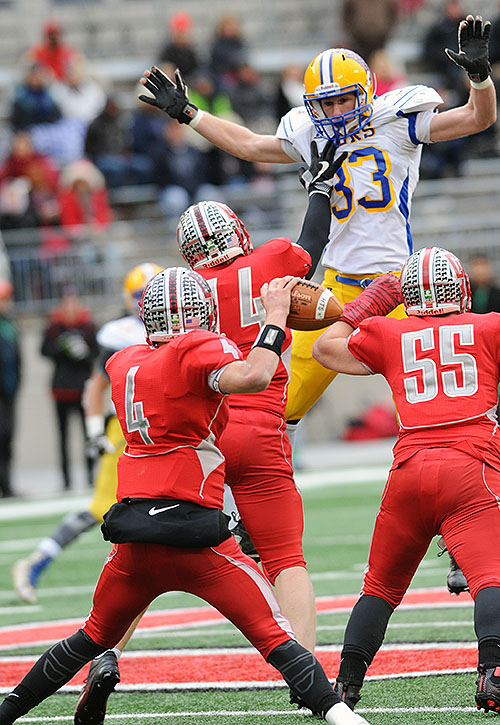 “Are they that good again?”  asked a writer of Marion Local.  Time will tell.

“We remembered, and it was a motivation to play better today,”  said the Tigers senior, Ellen Peters, who responded with 54 offensive assists in Saturday’s match.

And Versailles record of 22-6 entering the tournament weekend was by far the least impressive of the four Division III finalists.  But it didn’t matter.  Those six losses came at the hands of teams “better” than Tuscarawas (28-0) and Independence (26-1).

And to the writer’s question about Marion Local football…are they that good again?

“Well,”  I answered, “I suppose you should ask Tim Goodwin (Marion’s head coach).  You know, they have a big picture perspective about things like that.  If they do win it this year then that speaks to the standard already established.  So yes, they’d be that good again.  It’s the ones that slip away (like in 2015 against Kirtland) that fall below the standard.”

“Wow,” he smiled.  “You know, most teams would be happy just to get there.”

Teams that on a given year have the talent to compete with a Marion and Coldwater.  Teams with perhaps better talent than Minster, but without the competitive league standard to prepare them to actually beat a team like Minster on a given day.

He wasn’t there on Saturday to see Coldwater and Versailles play, a match that went five sets – back and forth – with neither team blinking or giving an inch.  There were no nerves.  There was no fear.  Just a standard to uphold. 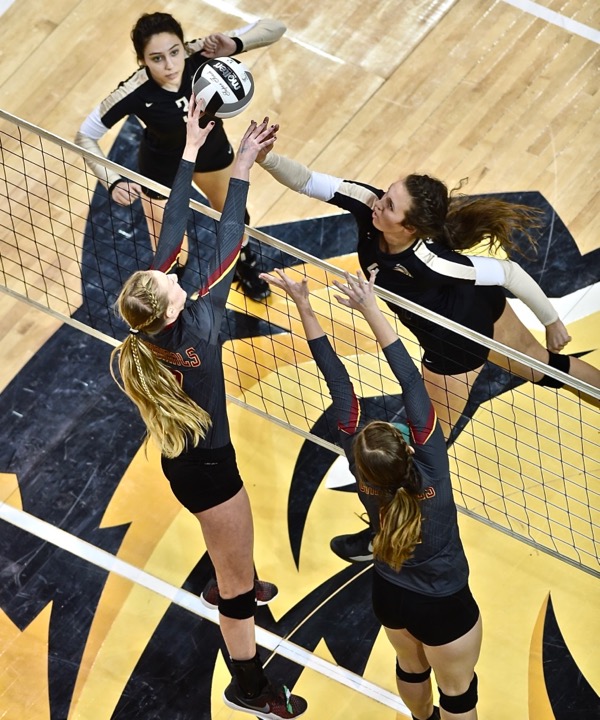