Versailles Shines The MAC’s Star One Brighter…Champs In Div. III

Versailles outlasted Coldwater in a war of wills, and skills, to claim its second Div. III volleyball title.

Fairborn – For the second time in five year the Versailles Tigers claimed the Division III OHSAA volleyball title on Saturday in one of best exhibition of will, and skill, in these 2017 championships.

The match was so incredibly close the statistics bear sharing.

Coldwater had 114 digs on defense.

Coldwater had 64 kills in the match.

And both teams finished with 59 assists.

That’s how close it was…and that’s how the Versailles Tigers prevailed to win the MAC’s 123rd state title in its 47-year history, shining the conference star, and its reputation for champions, one brighter. 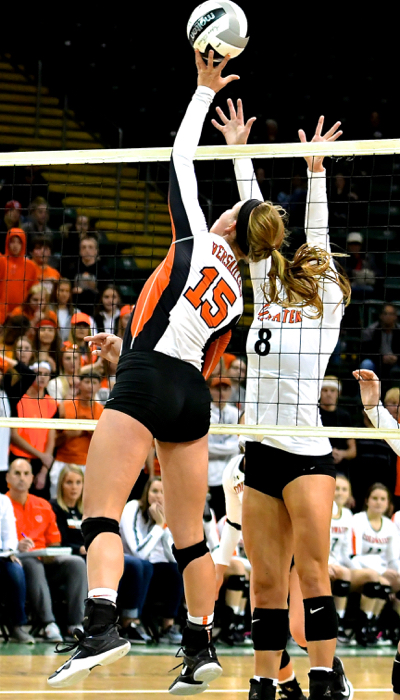 Versailles’ Ellen Peters pushes a point across the net over Coldwater’s Allison Sudhoff.

“What a privilege,”  said Versailles coach Kenzie Bruggeman.  “The league’s come such a long way in OHSAA volleyball.  And beat the #1-ranked team today to win the title, and to watch the #1-ranked team in Division IV (New Bremen) win their title, it just speaks volumes about the competition in our league and the respect we have for each other.  I know a lot of New Bremen people stayed around to see our match.  It’s just a privilege to represent the Midwest Athletic Conference in this manner.”

They got a huge game from Elizabeth Ording and Danielle Winner, whose 21 and 25 kills, respectively, accounted for the Tigers team total of 64.

Defensively, the McEldowney sisters, Caitlin and Kami, combined for 52 digs on the afternoon – Kami with 38, Caitlin with 14.

“We work on it all the time in practice,” said Kami McEldowney.  “The two of us have a pretty good bond going on.”

In serve effiiciency, Kami McEldowney and Kate Stammen each had three aces.

And to set up those big hitters…senior Ellen Peters kicked in an incredible 54 assists!

“We knew it was going to be a battle, because Coldwater is just a good team,”  added Bruggeman.  “They’re so sound that you don’t want to get into extended points with them, because they just don’t make mistakes.  That’s reflected by how close the statistics were.”

It marked the second time that the two teams had met, with Coldwater having won the first match during the last week of the regular season…in four games.

“That was definitely an incentive,”  said Ellen Peters.  “We didn’t play very well in that match and we came into this game with that on our minds.” 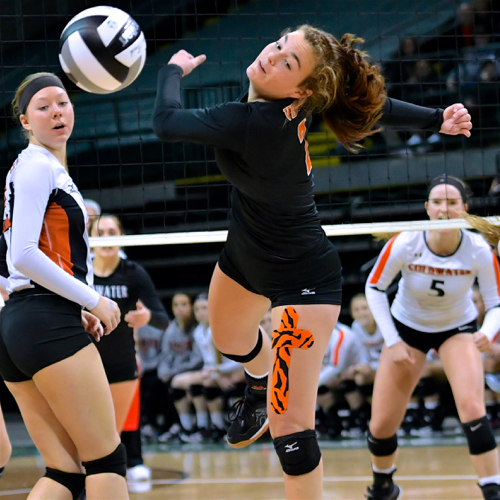 Kami McEldowney stretches to save a point late in the match against Coldwater.

But it was a match of sheer wills, each team winning two sets to set up the final first-to-fifteen showdown.

A huge crowd looked on – from Darke and Mercer counties – and with each point scored one side or the other came to their feet in support of their respective teams.

“Only in the MAC,”  said a hanger-on from the New Bremen game.  “I see people here with no rooting interest yelling for both teams.  That’s what the MAC means to these people.”

And in fact, Coldwater’s Nikki Etzler paid tribute to Versailles and the crowd by sharing that mistakes hurt them, yes, but Versailles was just that good in winning.

“We knew it was going to be like this,”  said Etzler, who was seeking Coldwater’s first title in volleyball. 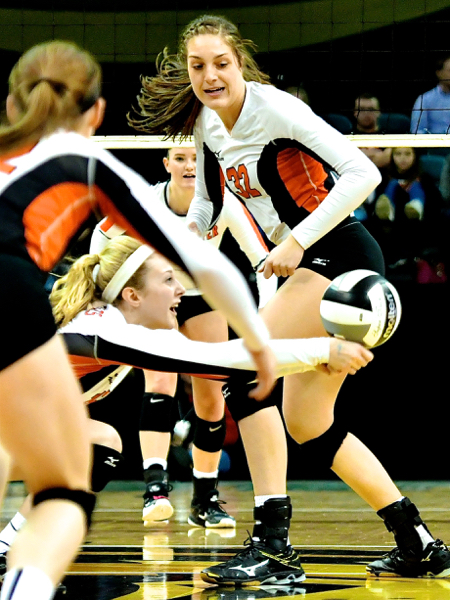 The Tigers’ defense was superior all day – 120 total digs against Coldwater.

“We both played the same schedule, we’re prepared alike, and we had a pretty good idea that it was going to go five sets.  We had some defensive breakdowns today that hurt us, but take nothing away from the way Versailles played.”

It does mark the Tigers’ second title in five years, and Kenzie Bruggeman found it hard to contain a broad smile when she said to a group of writers, “I’m having fun today.”

And to a man (or woman), each of her seniors on the media stage with her shared that smile.  Former football coach Al Hetrick laid the foundation for Versailles to once be called, “Titletown”.  None of those who accepted the Division III trophy Saturday was around for that, nor did it matter.  This is a new age of champions in Versailles, with a pair of women’s basketball titles in recent years…and Saturday’s second title in volleyball.

As with New Bremen, they’ll be celebrating from Frenchtown to North Star Saturday night.  Business will be brisk in the sports hangouts.  Kenzi Bruggeman would do well (and probably will) to get some tutelage on Al Hetrick, and “Tiger Ball”.  And welcome to the club.

“Titletown” is back in business. 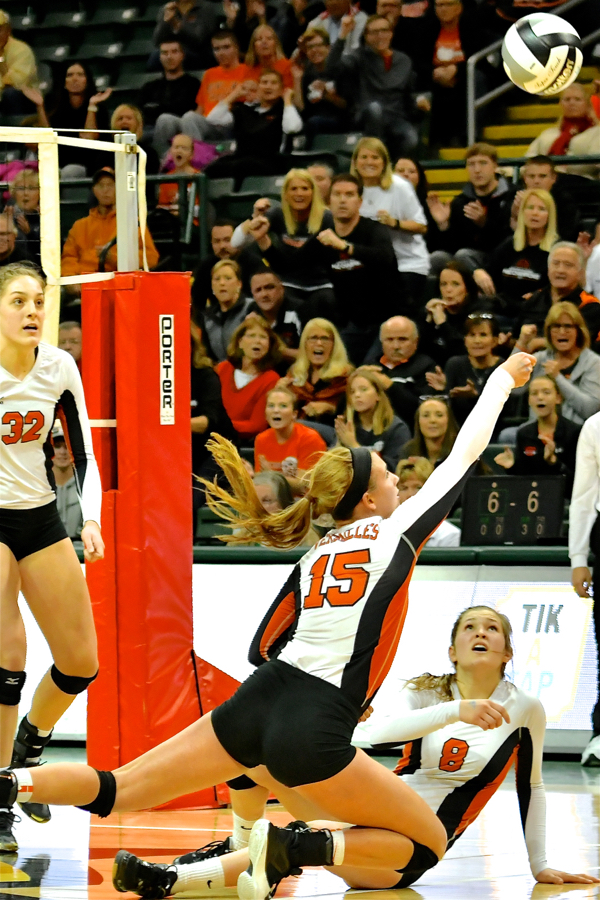 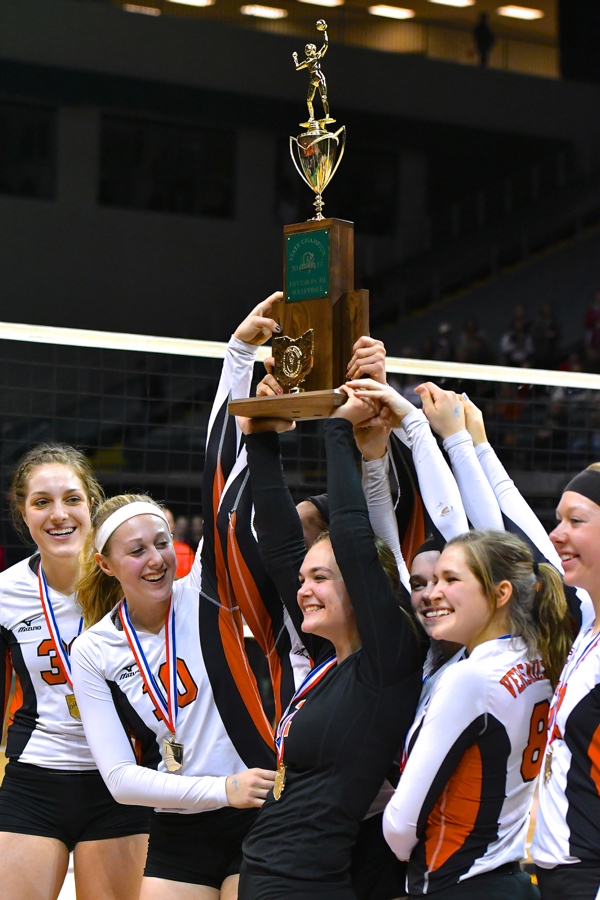