A hobbled Lehman Catholic saw opportunity slip through their fingers – along with the football – as they lose the battle of turnovers (and a regional semi-final) to Delphos St. John.

Lima –  Lehman’s Dick Roll drew a deep breath and shrugged his shoulders.  He had hoped for a better ending – a different ending – to his Cavaliers’ football season.

Minutes after losing to Delphos St. John in the Division VII regional semi-final game Friday, he, as always, took a moment to shed perspective on another disppointing finish to an otherwise sterling season.

“We had our opportunties,”  said Roll quietly.  “We just couldn’t move the ball because our quarterback was hobbled;  and we didn’t know this week if he’d be able to play at all.  We played hard, though.  We hit, and I’m proud of the effort from our kids.  We would have liked to have had a better finish to our season.”

And somewhere at the other end of the field St. John’s Todd Schulte was thanking his lucky stars.  He had won, yes…14-7.  But the manner in which he won left a lot to be desired.  And frankly, he knew it.

It was, in fact, an ugly football game.  Played in 23 degree freezing temperatures, both teams handled the ball like it was a block of ice.

Lehman, in losing, turned the football over four times.

But Lehman, the recipient of all those extra opportunities and great field position, simply could not cash in.

They got one gift on the opening kickoff when St. John’s Jared Wurst coughed up the ball at the Lehman 47.  Cavaliers ball, but four plays later they punted.

Two series later they sacked Wurst in the backfield and he lost the ball again.  Lehman took over at their own 43 this time, and four plays later they punted. 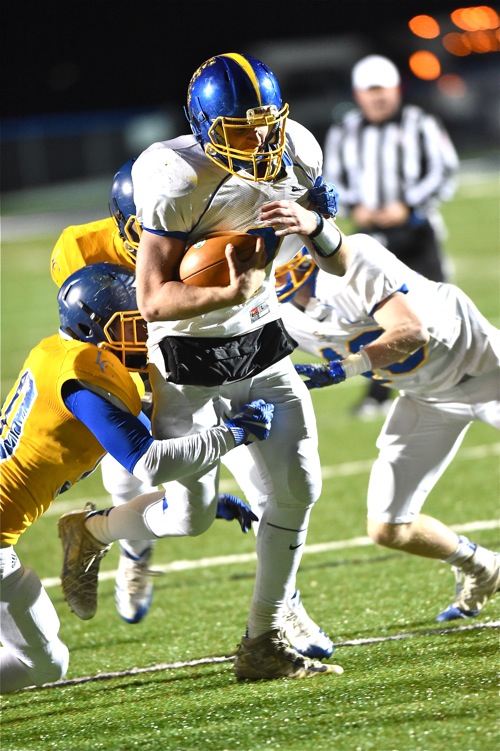 After four plays of their own, Delphos punted, giving Lehman the ball at their own 30 – from which they promptly drove inside the Delphos 1o yard line.  But four plays from point blank range yield nothing;  and St. John took ball back on downs.

Delphos started the second quarter with an 11-play drive, with Wurst hitting teammate Connor Hoolihan on a four-yard touchdown pass on fourth down to finally crack the scoreboard, 7-0.

On the ensuing kickoff, Lehman’s Owen Smith gathered the ball in on his own 10 and streaked up the middle of the field – only to be hit, fumble, and give the ball right back to St. John.  It was that kind of half.  Only, it got worse.

Delphos couldn’t move the ball and gave it up to Lehman on downs.  Whereupon the Cavaliers bogged down on their own 15 with 40 seconds remaining before the half.  Four plays yielded nothing, and Cam Lee dropped back to punt.  The snap wasn’t good, Lee hesitated for an instant, but long enough for St. John to block the kick, have Hunter Bonifas pick it up, and waltz into the end zone for a 14-0 halftime lead.

Yeah, it was that kind of night.  Four St. John turnovers in the first half and Lehman had nothing to show for it.  And the the two times that Lehman coughed it up cost them 14 points.

“It isn’t often that you can do that and still win,”  admitted Schulte afterwards.  “But, our defense played their hearts out tonight.  They made some plays.  They drove the ball late on us from deep in their own territory.  And our defense came up with the plays when we needed them.” 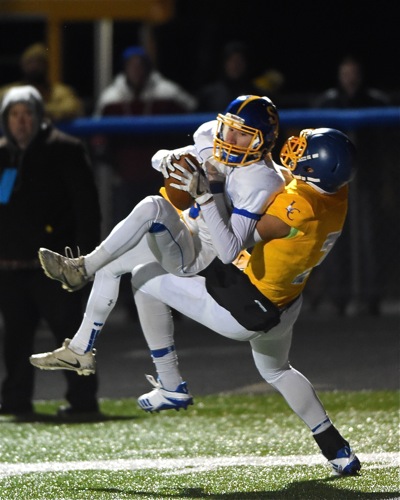 There was little different at the start of the second half, except…Elliott Gilardi began moving the ball downfield with running back Owen Smith.  Smith got the rhythm of things, warmed up as the temperature dropped, and finally moved the ball to the Delphos 1 yard line with 3:01 remaining in the third quarter.  Three tries to score couldn’t get it done.  But finally, on fourth down, Gilardi bulled in himself – barely – to put Lehman on the board and back in the game.

They never got closer.

They had three chances, though, driving the ball inside the St. John 20, and turned it back on downs.

They picked off a tipped pass two minutes into the fourth quarter, but Gilardi, noticeably hobbled by a sprained ankle, was sacked on fourth down.

And their last possession of the game, after a Delphos punt, Gilardi had his own pass tipped, picked off, and that, as they say…was that for Lehman football, 2017.

In his post-game huddle, Schulte told his team.  “This wasn’t very pretty, but hey, we’re playing again next Friday in the regional final.  And this time of year that’s all that counts.”

“Our offense didn’t do much to help us out tonight,”  said Schulte later.  “But our defense was tremendous all night long.  You know it’s a good defensive effort when you can win a game with five turnovers.  Lehman was backed up in the second half, and they just kept coming, making plays and putting the pressure on us.  It wasn’t pretty, but this time of year a win’s a win.  We live to play again next week.” 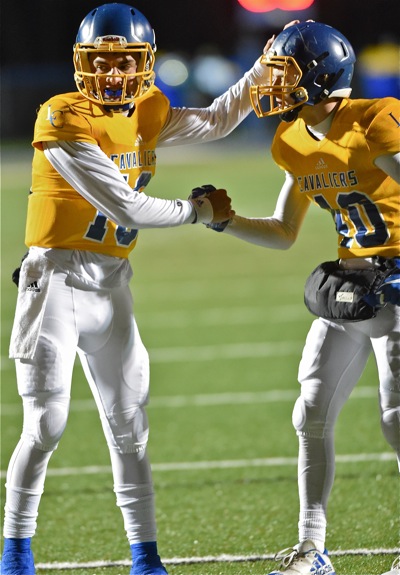 Statistically, it was as ugly as Schulte said.  Lehman’s biggest play was a 34-yard first half past from Gilardi to Michael Bunker.  And a shoestring tackle was all that kept him out of the end zone for what might have been the tying touchdown.  It was that kind of night.

And for St. John, Jared Wurst took it upon himself to carry the ball 21 times for 87 yards – he still fumbled it three times – but it was that kind of night for them, too.

“You know we had our chances,”  said Roll.  “We weren’t as sharp as we should have been.  But being undermanned in the second half (Cam Lee left at halftime with a wrist injury), we didn’t quit.  We almost came back and won.  Our defense played a fantastic game – they hit – and I couldn’t be prouder of them.  These kids had to play both ways,” he laughed, “…so they played great and you can’t take that away from them.  We hit and we were very happy with our effort.”

Like so many other years with great seasons, Lehman ended this one with a 10-2 mark, undermanned, and questioning what might have been had it not been for a Elliott Gilardi’s sprained ankle……

And all those missed opportunities! 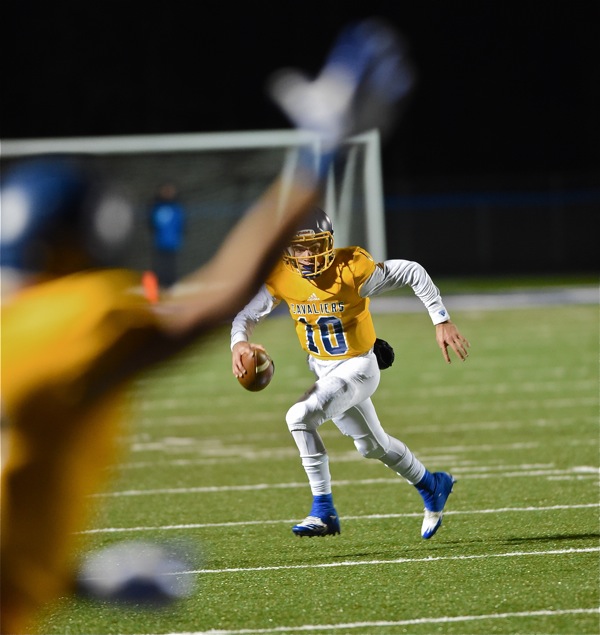 Elliott, I’m open…but Lehman Elliott Gilardi couldn’t get the ball to the unidentified receiver for a third quarter first down. 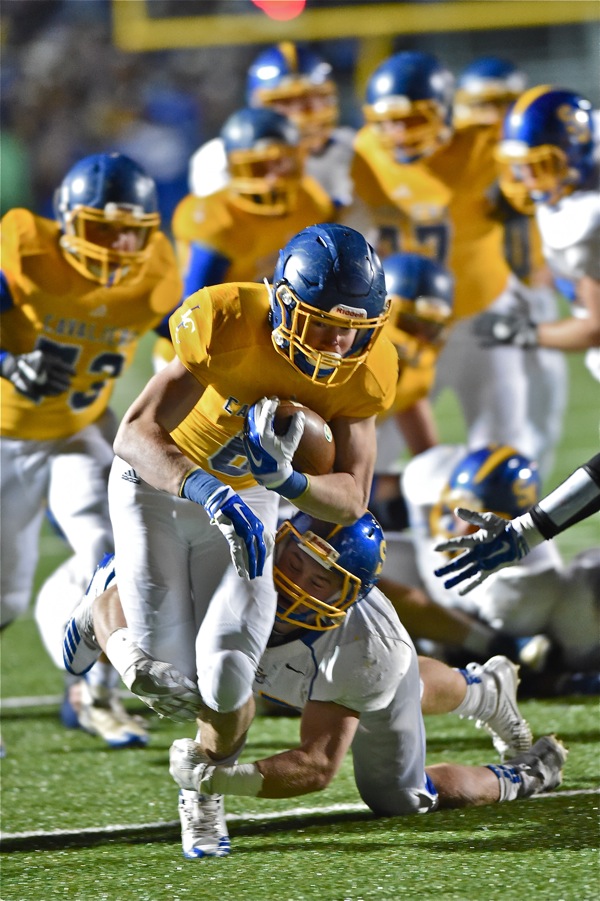 Lehman's Owen Smith got it going in the second half, and drove the Cavaliers into scoring range on this third quarter run. (Press Pros Feature Photos by Sonny Fulks)