Jared Huelsman and Minster staged another cardiac finish to top an irrepressible Convoy Crestview.  The Wildcats move on, with a date in Week 13 with Delphos St. John.

Lima – With under two minutes on the game clock and the Minster Wildcats trailing 32 – 27, quarterback Jared Huelsman took the snap, and as he did for the entire game, carried the football and the ‘Cats to victory with an 8 yard scamper, to give Minster a 35-32 lead over Convoy Crestview with 1:39 on the Lima Stadium clock. 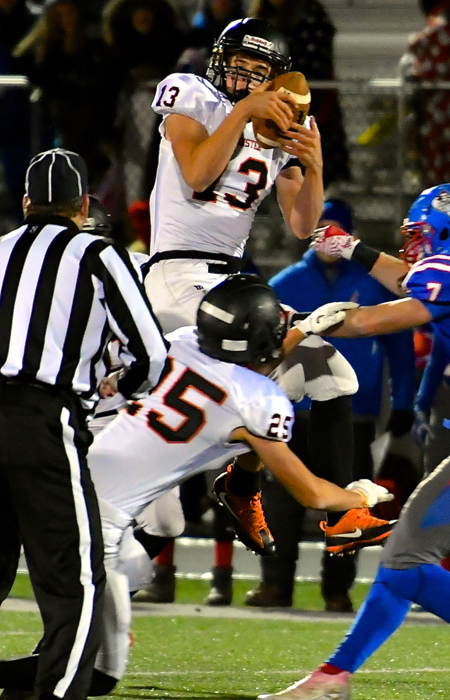 Minster head coach Geron Stokes said of Crestview.  “That’s one fine high school football team.  It’s well coached, tough, and has so many skilled athletes.  After watching film all week I knew it would be a dogfight.”

And as Stokes predicted the dogfight would ensue until the final play of the game.

Crestview’s head coach, Jared Owens, dismissed the tying field goal attempt and put the ball, and game, in the hands and legs of Kline.  After what seemed an eternity of scrambling by Kline for the Minster faithful, the junior signal caller launched a pass from the 22 yard line that was ultimately batted down by several Minster defenders.  And Minster advanced!

With temperatures hovering around the 17 degree mark, no one in the large crowd could predict what would ultimately turn in to one of the great high school games played in recent years, especially after the two squad battled to a scoreless stalemate in the first quarter.

Both turned in sparkling performances.  Huelsman had 148 yards rushing and 213 passing; and Kline ran for 223 yards and passed for another 159.  And there were many other outstanding performances by players from both teams. 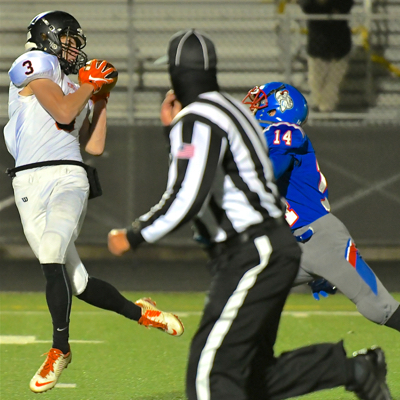 Minster’s Alex Lemkuhl hauls in a Jared Huelsman pass in the Wildcats’ win over Crestview.

Minster countered with Alex Lehmkuhl hauling in 4 passes for 110 yards, Austin Brown with 3 receptions for 37 yards, and Issac Schmiesing and August Boehnlein had two catches each, both in clutch situations.

The game opened on a promising note for the Wildcats as they halted the first Crestview possession with a Jacob Hoying interception.  However, the Van Wert county crew was up to the task of stopping their MAC counterpart, led by two All-NWC defensive stalwarts, Dylan Hicks and Brayden Seller, as they made running the ball consistently a challenge for the Minster. 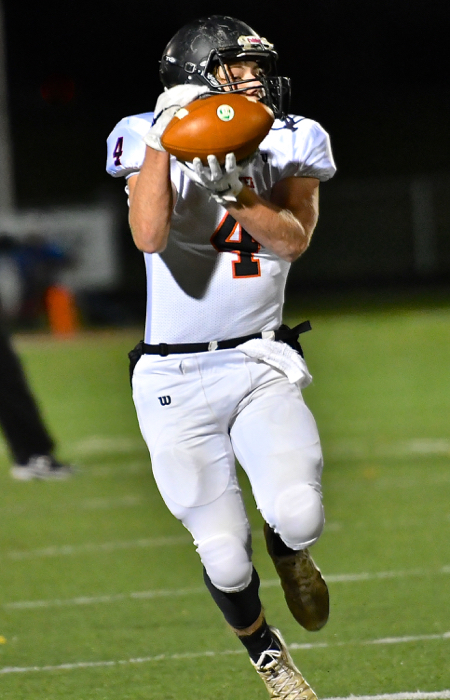 Isaac Schmiesing makes a play in the second half of Friday’s regional semi-final win.

After Minster moved the ball to the Crestview 40 early in the second quarter, Crestview’s Wade Sheets picked off a Huelsman pass and returned it to the Minster 48.  With some needed momentum, Crestview turned the pick into a touchdown as Kline found Sheets for the first score of the game from 14 yards out.

The Wildcats quickly respond with a touchdown of their own, highlighted by a Huelsman to Schmiesing pass on a wheel route.   The PAT failed making the score 7-6.

With a mere 1:51 on the clock the Knights did not sit on the ball, but moved quickly to the end zone scoring on a 3 yard Kline to Stefanek  strike.  Alex Schmiesing blocked the PAT, sending the teams to the break with the Knights holding the 13-6 lead.

The scoring erupted at the beginning of the second half as Minster scored first on a three-play, 24-second drive, capped by a 47 yard strike from Huelsman to Lehmkuhl.

Not to be outdone, Crestview quickly answered with a 4-play, 1:30-second drive featuring a breathtaking 55 yard touchdown scamper by Kline.  Moments later they scored again on a ‘pick 6’ touchdown by Charles Stefanek.

With the sudden series of misfortunes some of the Minster faithful may have started thinking basketball, but not Geron Stokes.

“We have tough kids, a great senior class who play with great composure because they prepare so well,” said Stokes.

Minster closed out with a stop on downs, highlighted by a Huelsman play on his counterpart, Cline. Then Minster scored on a drive of their own, a leaping Alex Lehmkuhl hauling in a 8 yard touchdown pass from Huelsman.

Drew Kline got the lead back for the Knights with a 25 yard TD scamper after a controversial Minster interception was overturned. It allowed the Knights a second chance at scoring, and moved the lead to  32-27.  It set up the Huelsman heroics to end the game.

A relieved Geron Stokes, while applauding the Crestview Knights as one of the best teams Ohio Division 7, referred to his own Wildcats as “legends of the cold”.

“As the weather gets colder we challenge our young men to step up and take the lead.” said Stokes.

Friday night they did just that, and live to challenge more cold next week…and MAC rival Delphos St. John. 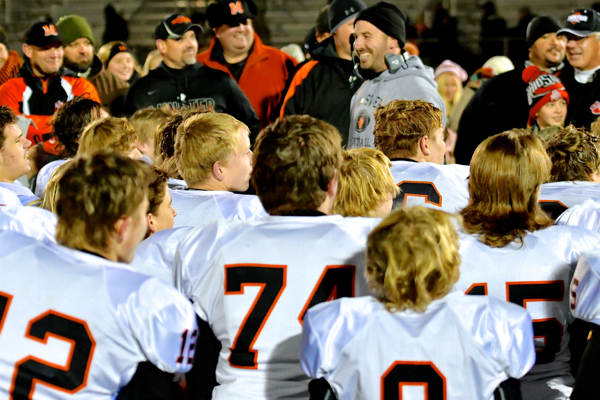 Geron Stokes assembled the team to remind, “That when it gets cold it time for ‘dude’ to play like ‘dudes.’ 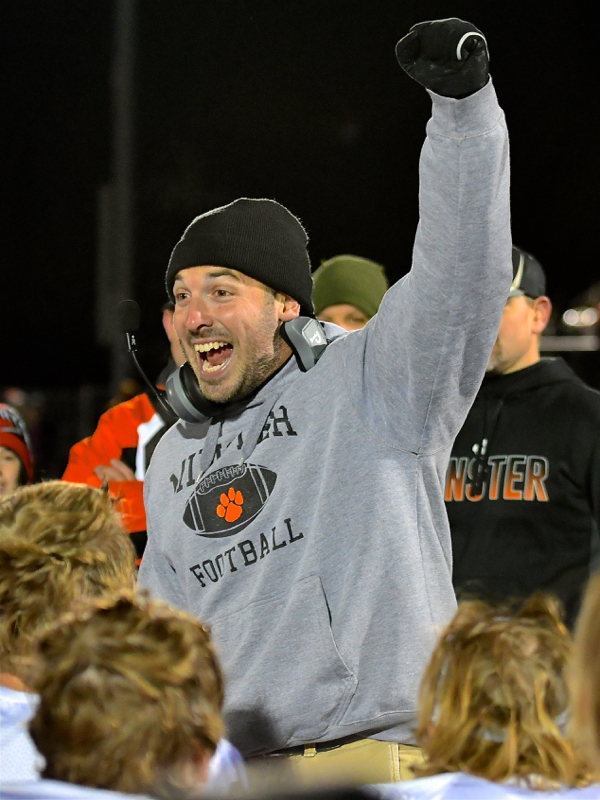