Municipal Stadium is long gone, but the memory of what once was…Frank Ryan-to-Gary Collins…endures in the minds of Browns fans who wonder if miracles like that will happen again in the next 50 years.

(Ed. Note:  In tribute to our former colleague Dale Meggas, we present one of Dale’s last submissions to Press Pros from January, 2015, detailing the 50th anniversary of Cleveland’s last professional football championship…the day the Browns beat the Baltimore Colts for the NFL championship.  Countless readers who are Browns fans wrote to us at the time to share their enjoyment from reading this story, and we think fondly now again of that day, and of Dale.  Hopefully, there are those who will remember him just as well…50 years from now!)

CLEVELAND – It’s now official. Much like the days when Dick Clark was ushering in the New Year from Times Square in New York City, December 27th marked 50 years since the Cleveland Browns last won a league championship.

Yes, it was 50 years ago last week when Frank Ryan tossed three touchdowns passes to Gary Collins to give the Browns a 27-0 win over the Baltimore Colts before 79,544 fans at the late, great Cleveland Stadium.

That gives us 48 Super Bowls with 96 teams reaching the title game. And in that time, 28 of the current 32 teams in the NFL have been among those 96 qualifiers. Unthinkable back then, given the Browns status as one of the NFL’s most successful franchises, that they would with this long before playing in another NFL championship game.

We’ve gone over that many, many times. And we have also reminded all who will listen that Cleveland is the only city among those four, Cleveland, Detroit, Jacksonville and Houston, to not only play in the Super Bowl, but never hosting it, as well.

Detroit, Jacksonville and Houston, while short on having a team in the game, have brought football fans to their stadia to watch the game live, thereby reaping the financial benefits of at least being thought of as a Super Bowl city.

But enough of that.

We are here to celebrate the past and remind those like my kids that the past was better than the present when you think of football in this town.

You see, in Cleveland, much of what Browns fans declare success, is getting to the tailgate party on time and lasting until the last keg is dry.

That’s because if you only go back to 1999, when the team returned from NFL Purgatory (1996-98), the Browns are an incredible 84-171 that includes a less than impressive 52-76 mark at new First Energy Stadium (nee Browns Stadium). So much for home field advantage!

We are here to celebrate an anniversary rather than hash up the recent days where  winning two games in a row in Cleveland is a celebration.

Those celebrations in Cleveland are followed by sportscasters drooling about what might be a successful season that might lead to lucrative book deals. You see, if the Browns ever do reach the Super Bowl, there are books to be written and documentary videos to be shot beyond the realm of imagination in more formidable markets like New York and Chicago.

And with books and documentaries you see dollar signs. Those covering the Browns can only wish for such a payday.

But that is for another day in another year. You see, there were 79,544 who really did see the Browns win that championship in 1964.

Many of those there that day have passed away, including my father Zino, and my uncle Gus Soldathos.

But I occasionally find someone who was really there. Most are relatives of sports writers who covered the game, but others who were at Cleveland Stadium that day are far between, but they do represent the few.

The others who have survived the 50 years since “Ryan-to-Collins” and have became a Cleveland historical footnote will tell the tales of how they watched the game.

Most tell of watching the game in such places as motel rooms in Toledo. Others tell of having a father who climbed up on the roof to turn their television antenna to the west to pick up the signal of a Toledo station, or to the east to find a Youngstown signal.

They never tell you the screen was filled with electrical snow. For those too young, a bad television signal was filled with interference that was called snow and made it very difficult to watch anything especially baseball or football games.

But I was not among those who saw the game from our television by way of a station in Toledo or Youngstown. I was there at Cleveland Stadium with Zino and Gus, along with my childhood friend Bob Szucs and his Uncle Frank.

The Browns wrapped up the Eastern Division title with a 52-20 win over the New York Giants on Dec. 12 at Yankee Stadium. It gave the Browns a 10-3-1 record, edging the St. Louis Cardinals, who finished 9-3-2.

Cleveland had a chance to clinch the Eastern Division a week earlier but suffered a 28-19 setback to the St. Louis Cardinals at old Busch Stadium. The loss kept the Cardinals in the hunt for the title. The Cardinals, who were led by quarterback Charlie Johnson, forced the Browns to beat the Giants in the season finale for the division title.

Despite going 1-0-1 against the Browns, the Cardinals were denied their share of first place due to a 10-10 tie that season with the Giants.

After the Browns win over the Giants, it was announced that remaining tickets would be sold to those who expressed interest by post card to the Browns.

Our postcard was answered with a “Thank you for your interest in the Browns, but unfortunately, you are not among those who will be able to purchase tickets to the 1964 NFL championship game.” 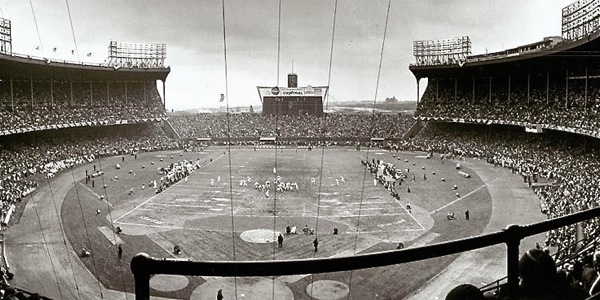 Photo of the ’64 title game from the upper deck, behind home plate, at Municipal Stadium.  79,544 packed the place to see the Browns last title.

I was deflated. A shot at going to see the biggest of the big games was going to get away. That was until Dad came through with tickets for us,  along with another for Uncle Gus.  What a dad!  The guy who got me a ticket to the 1963 Major League Baseball All-Star Game at Cleveland Stadium just 18 months earlier came through again with tickets to another big game.

So, that typically gray, but not-so-cold December Sunday afternoon in Cleveland found us joining the rest of the stadium crowd to see the Browns take on Johnny Unitas and the Colts, a team that went 12-2 and outscored opponents 428-225 on the way to running off with the Western Division title.

Despite the home field advantage, there were relatively few who thought the Browns would win their first NFL title since 1954 and ’55. And as my kids say, “that was before my time.” And in those days when the Browns were on top of the NFL, my family was living in California.

But we were there that day on the lakefront and ready to enjoy being at the first NFL championship game in Cleveland in nine years. While I was among those who wished for the best, but anticipated the worst, the first half left me and the other 79,543 with no idea who would win the game.

That’s because the Browns and Colts finished the opening 30 minutes without a score. As Zino and I headed off to see his cousin, Ernie, who supplied us with halftime hot dogs, I asked what he thought of the Browns chances at that point.

Dad was among the optimistic who thought the guys in white uniforms and orange helmets had a solid shot at pulling off the upset over the slickly-dressed Colts, who wore their classic blue uniform tops and white helmets with the inverted horseshoes.

And he proved to be right.

While the rest of Cleveland was listening to the radio call of Gib Shanley and Jim Graner on WERE-AM 1300, or watching from a rigged television antenna, we were there in Section 18 of the upper deck of Cleveland Stadium. That’s where we witnessed three Ryan-to-Collins touchdowns with a pair of Lou Groza field goals, along with an impressive defense led by Galen Fiss in the 27-0 win.

What made it better was what happened the next night. In those days, the NFL never, never, ever allowed telecasts of games in the home city of the game. And that included the NFL championship game. There was no lifting of the blackout if the game was sold out.

Either you went to the game in person or you listened on the radio. The NFL did not give away its product to the home fans.

That next night, Dec. 28, found WJW-TV 8, the home of the Browns road games, showing the game on tape delay. While it was the holiday season, my family had scheduled a trip to Parma to visit the family of my sister’s Godmother, Pat Tober.

So, while making a holiday visit, I was able to watch the game again with Pat’s sons, Mick and Tim. It was great seeing the game again, knowing the outcome of what turned out to be a landmark game in Cleveland sports history.

I was there and I was “there” again a day later, seeing Ryan-to-Collins not once, not twice, but three times.

Which leaves me to wonder how long current Browns fans can hold out hope. My son-in-law, Joe, is as big a Browns fan as there is these days. He’s not over the edge, but definitely a Browns fan who really wants to see the team reach the Super Bowl. And late in his 20s, Joe is beginning to doubt that he will ever see the Browns do it.

It won’t happen this year. And maybe not next year. But you never know. The team that won four All-American Football Conference titles from 1946-49, and was in the NFL title game in each of the next six years under Hall of Fame quarterback Otto Graham, needs to get there just once to regain respect.

I know it’s been 50 years since the Browns have won an NFL title, and 45 since defeating the Dallas Cowboys at the Cotton Bowl for its most recent road playoff victory. And, yes, it has been 20 years since the Browns of another time had their most recent playoff win, beating the New England Patriots in a 1994 under then-Browns coach Bill Belichick.

And if you’re counting, the Indians have now gone 67 years since their last World Series title back in 1948 under Bill Veeck.  And the Cavaliers are currently in their 45th season without an NBA title since Nick Mileti brought the team to Cleveland Arena in 1970.

But as any optimist worth his or her soul would say, hope springs eternal. I just don’t know how long those who still believe can hold out for their chance at the day when another Frank Ryan finds another Gary Collins to create memories that will last a lifetime.

Hall of famer JIm Brown (#32, white) runs for yardage against the Baltimore Colts in the 1964 NFL Championship game played in Cleveland. The Browns won the game and the title, 27-0. (Photos Courtesy of The Cleveland Browns)