What To Say About The Football Playoffs, And Competitive Balance….?

You can check the scores and then tell me…why are we playing so many lopsided playoff games, and do the benefits outweigh the facts of better football, and a more managed season?

I love the Saturday and Sunday morning emails.

And, I love the obvious fact of Press Pros’ profile spreading around Ohio like an oil slick. People are reading. People are sharing. And people we’ve never heard from before are writing to say that what we’re saying about the modern culture of sports sure makes sense to them.

This past weekend, the first of the OHSAA football playoffs, was especially fertile. A lot of people did pay attention to the scores of the first round games; and apparently took the time to consider that.  From our Friday Minute-To-Minute scoreboard alone there were 18 games in the southwest district alone where the winning team scored 40 points or more.

There were at least 19 games that finished with a point differential of more than 30 points…thereby necessitating the running clock in the second half.

There were actually only four games where the winning team scored 50 points or more, but more than one wrote to say that it could easily have been three times that many teams, if not for JVs playing…along with the running clock.

So, what does all this portend as to high school football in 2017, and even beyond?

Well, first, it probably signals the actual watering down of the smaller divisions, V, VI, and VII, as was questioned on our column last week on best games to choose from in Week 1.

“I took the time to look,” wrote Marc Sullivan. “And you were right about games that had no competitive value at all.  Just games.”

Another wrote to add (first-time reader Tom Gano), “The Trotwood game (48-7 over Elida) did nothing for the kids or fans of either team.”

Yet another (Robt. Snyder, from Columbus) wrote to say, “Ticket prices for OHSAA games should reflect dynamic pricing. There was nothing very dynamic about Hilliard-Bradley and Dayton Fairmont (49-14).”

So, is it coincidence that there were that many games with 30-point differentials?

Or, does it say that the bottom seeds of all those regions about the state were weaker than normal?

Does it say that what goes around, comes around, and if you don’t like what you witnessed this year just give it time – that Week 1 was just a blip on the radar?

Or, does it say that that the quality of football really doesn’t matter, as long as there’s a game and the opportunity to sell tickets?

Well, the dye-in-the-wool football men, like Bob and Dave from Beavercreek and Huber Heights, are going to say shut the hell up and just let ‘em play.

While the David Wallers of the world write and say, “It makes perfect sense in a culture of concern over the safety of football to play more select games with better qualified opponents, if for no other reason than for the fact of safety. I question how many #8 seeded teams were at risk against teams like Trotwood and Colerain.”

Frankly, David’s point is a little extreme, and even questionable in Colerain’s case, because they actually beat Moeller, 45-0.

But more people than ever wrote this weekend with many mentioning that the first-year results of the new competitive balance initiative has proved nothing.

“So, where’s the balance?,” asks to Craig Courtney, from Hilliard, Ohio.

“What I suspect is that there’s more competitive games within the regions in the first three weeks, and better ticket sales as a result. If they’re losing attendance at the state tournament they have to make it up somewhere,” added James, from Cedarville.

And, “How convenient would it be to have Coldwater and Marion Local play each other prior to the state tournament, because you know there would at least a huge crowd for that game? You’d be taking your chances on a state final with those two teams where the opposing community might not show up,” says Joe Bookwalter, an old Northmont man and protege’ of former coach Ned Booher.

Still another wrote to say, “The way it looks now you might be able to seat the crowd for the Division VII final in a movie theatre.”

Questions raised over playoff football in Week 1, and competitive balance. The jury is obviously out, and there may not be any more deliberations past Week 2.

“Bunkers” is proud to sponsor coverage of the area high school sports on Press Pros Magazine. 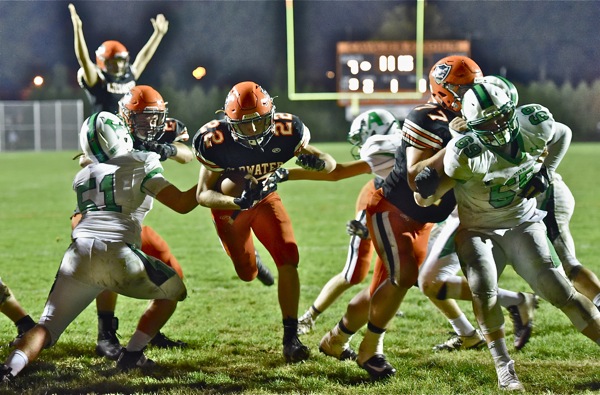