Defending champion Marion Local used its defense to shut down Will Homan, and Fort Recovery, in their Division VI opening round rematch.

Meeting the Fort Recovery Indians for the second time in three weeks, the Flyers were bent on containing the elusive, and powerful Indian running back. Coming off a record-setting performance against St. Henry in week 10, and a sterling outing against the Flyers in week 9 in which Homan ran for over 170 yards, the Blue and Gold was challenged by Goodwin to slow the Fort Recovery dynamo.

While not completely stopping Homan, (133 yards on 16 carries), the Flyer defensive unit came up aces in virtually every other aspect of the game. The Purple summary is as follows:
* Five first downs
* 4 yards Passing
*  148 total yards 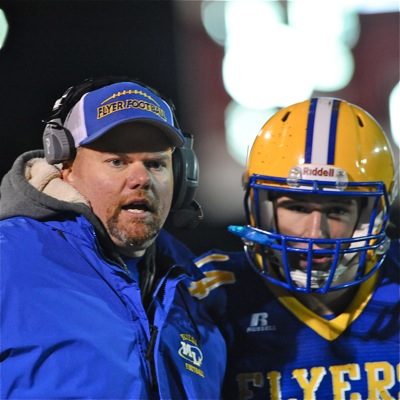 “No one ever completely shuts down a back like Will Homan, but our effort was there all night…and we move on.”

A somewhat satisfied Tim Goodwin summarized the game in a few words. “We were for the most part pleased with our effort on both sides of the ball.” No one ever completely shuts down a back like Homan, but our effort was there all night and we move on.”

In addition to the stifling run and pass defense, the Flyers also forced three Indian turnovers, with a pair of interceptions and a recovered fumble. The Flyers’ interception to open second half play was the ultimate back breaker for the Indians. Working back from a 20-0 first half deficit, the Indians were mounting their best drive of the night and seemingly seizing momentum.

The Fort running game was hitting on all cylinders, highlighted by a Homan 36 yard run.  Then disaster struck. A Schmitz pass was intercepted on the Flyer 12 and returned to the 36. Minutes later Derek Ruhenkamp gathered in a 13 yard scoring toss, moving the score to 27 – 0 and effectively ending the game.

The Flyers will now move on to face Spencerville, a 34-0 winner over Mechanicsburg,  in week 12.