Sadly, this WS, Like The Others, Will Be Forgotten….

There’ve been so many good ones, and for so long, that we take them now for granted.  Why the World Series is largely forgotten in the annals of sports history.

Let me ask you this.

Name for me the greatest Super Bowl game of all time – or at least the one most memorable.  Think about it, but not for long.  You shouldn’t have to.

OK, now think about the great NBA Finals you remember.  And that won’t take long either, at least if you live in Ohio.

But now.  Anyone but a card-carrying member of the Baseball Trivia Club of America…tell me the greatest World Series of all time?  You can’t, I’m betting.  Only those who’ve made it their life’s work to file and remember the game’s greatest moments will come up short.

Why?  Because there’s just too much baseball, many would say.  All those games – 162 during the regular season.  All those teams – expansion in the respect of memory overload, has done baseball history a gross disservice.  And the way the World Series games are presented now.  They don’t come on until 8 pm (eastern time), they take five hours to play (Game 5 this week), and no one’s awake for the end.  If you don’t see the highlights the next day, you’re totally in the dark.

It’s a shame, because compared to football, basketball, and some of the other great sports championships baseball is largely taken for granted.  People tend to remember the Super Bowls because it’s just one game, on one day.  And because of that we can remember even the bad ones.  My personal favorite is the New York Giants win over New England a few years ago that denied the Patriots the perfect, unbeaten season.  But don’t ask me the number.  I just know it was the one after the 2007 season – and the pass from Eli Manning to David Tyree.

As for basketball, I do remember some of the old NBA finals involving the Celtics and the Lakers.  But that was 50 years ago, and it would take considerable research for most to come up with any pertinent information.  But ask just about anyone locally and they’ll tell you the best championship was the Cavaliers coming back from two games down to beat Golden State and Steph Curry two years ago.  Beyond that, not one in ten can even tell you who Willis Reed was…or Bob Cousy.

But with baseball there are so many iconic World Series – one for the ages in every generation, it seems – and still, only the most ardent student of the game remembers.

Most involve the New York Yankees, because they’ve won it so many times…something like 26 world titles. 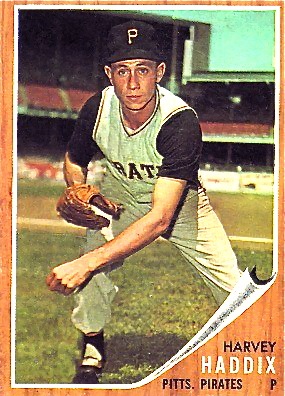 Springfield native Harvey Haddix was actually the winning pitcher in game 7 of the ’60 Series.

But who out there even remembers the 1960 Series when Pittsburgh came from behind in the series, and in Game 7, to win it on Bill Mazeroski’s walk-off home run in the bottom of the ninth?

And for that matter, how many modern Reds fans can even share the details of the ’75 Series, of Game 6, and the Carlton Fisk home run?

And what about one year later?  How many can tell me what the Reds were doing that October?  I recently asked someone who swore that he had the Reds’ history down to a science.  He had completely forgotten their four-game sweep of the ’76 Yankees, confusing it with the four-game sweep of the Athletics in 1990.

And for that matter, how many of you can actually tell me when the Reds last won the World Series.  Trick question:  It was the 1990 Series…27 years ago.  Like the current Dodgers, it’s been a quarter century since the Reds’ last championship.

Ah, yes, this current Series has been one of the greatest, and I’ll lay you odds that Game 5, and the 13-12 Houston win, will go down as one of the five greatest Series games in the last 100 years.  It deserves to be remembered with the Pirates and Yankees and Game 7 from 1960.

But ten years from now, it won’t be.  It’ll be forgotten, along with the 1955 Brooklyn Dodgers, who behind Johnny Podres finally broke through after so many years of frustration to beat the Yankees.

Or the ’56 Series, with that iconic photo of Yankee pitcher Don Larsen jumping into the arms of catcher Yogi Berra…after throwing the only perfect game in World Series history.  Who even remembers that Dale Mitchell made the final out for Brooklyn?

It will be forgotten, along with ’69 Mets – the Amazin’ Mets – who shocked the baseball world by beating the overwhelmingly favored Baltimore Orioles…with Frank Robinson, Brooks Robinson, Boog Powell, and Jim Palmer.  And does anyone even think of Tom Seaver, Jerry Koosman, or Tommy Agee anymore?

Actually, it it wasn’t for major league baseball playing the video of Kirk Gibson pumping his fist after hitting his home run no one would remember the Dodgers beating the Athletics in the 1988 Series.  Kirk who?

It’s been forgotten, along with the 2001 Arizona Diamondbacks, who defied the odds that year, by beating Derek Jeter and the Yankees in seven games.  And here’s a hint on how they did it:  Curt Schilling and Randy Johnson. 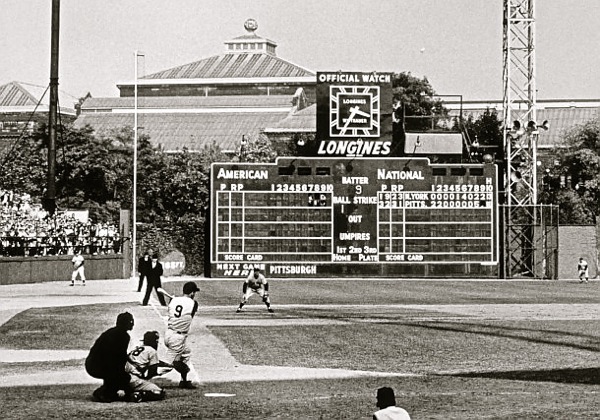 The famous photo snapped at the very moment Bill Mazeroski hit the home run to beat the Yankees in the bottom of the night, Game 7, of the 1960 World Series. (Press Pros File Photo)