In one of the truly impressive tournament performances depicting a specific conference, the Shelby County League left little doubt as to the strength and depth of area volleyball Saturday by sweeping past Riverside, Cincinnati Christian, and Miami Valley Christian Academy…without so much as losing a set!

Troy – Unfortunately, sometimes the mere fact of the score, the win, and the issue of moving on to the next round of the tournament shields the facts of how it was done.  And trust it, that should not be the case regarding Shelby County League volleyball and the outcome of Saturday’s Division IV district finals Saturday at Troy High School.

And in the evening’s final match, pitting John Rodgers’ Fort Loramie Redskins against Miami Valley Christian Academy, Loramie simply MASHED Miami Valley, by scores of 25-5, 25-9, and 25-19.  And it wasn’t that close.

The “Heidout ” is proud to sponsor coverage of the Shelby County League on staging.pressprosmagazine.com.

The point is…it was a glorious day for Shelby County League volleyball, with all three teams advancing to next week’s regional round of the tournament, while leaving little doubt to those scouting that a date with any of the three is a date with fate.  With two former state champs, and rapidly improving Russia, you take nothing for granted.

In the opening game Russia’s tandem of outside hitter, junior Laurissa Poling, and libero Whitney Pleiman, were on fire.  Pleiman played her usual sterling game on defense, while Poling registered 18 kills, 10 digs, and 6 blocks.  And, there was complementing help.  Teammate Jenna Cordonnier had a day of her own, registering 35 assists.

“It feels pretty good…being district champs,” said a broadly-grinning coach Aaron Watkins.  “This is so much better than last year.”

Well, of course.  But the manner in which the Raiders did it, against the supposed best in their Division IV district, was cause for even more pride and enjoyment.  Their 19-8 record has come with a lot of knicks and dings. 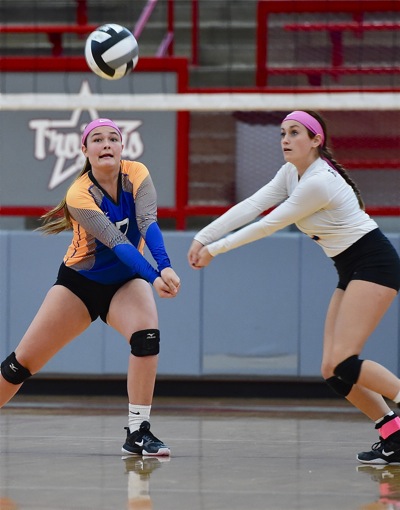 Russia’s defense was, as usual, exceptional. Faith Apple and Whitney Pleiman converge to save a point against Riverside.

“I have to give a shout out to some friends that have helped me scout, gave us a good report on this team, and helped us today,”  said Watkins.  “We had a great report.  Our game plan was nearly perfect.  We shut down their big hitter, and Laurissa (Poling) and Whitney (Pleiman) had great nights.  Frankly, we all played about as well as we could possibly play tonight.”

For Poling’s part, she could have had an even bigger night in a more competitive match.  Her impact was never challenged with such wide-open play.  But for now, she simply relished in being a district champ.

“We just wanted to get to the regional round,”  she said with a smile that rivaled that of her coach’s.  “We didn’t get there last year, so this year, and today, was an important day for us.”

In the afternoon’s second game, two-time defending champ Jackson Center was no less efficient in dispatching a Cincinnati Christian team that was simply outmanned, and outclassed, by the two-time champions.  It led one area coach who was there scouting to remark, “I’ll be surprised if Cincinnati Christian gets enough points in three games to compete in one.  They don’t know what they’re up against.”

In short order Kim Metz and her Lady Tigers let everyone know.  Junior Raquel Kessler played like a whirling dervish, while teammate Katelyn Sosby had her best game of the tournament, to pace the Tigers to their 18th win of the season.  The challenge, of course, is to live up to the expectation of a preceding team that accomplished so much over the past two seasons – two state championships! 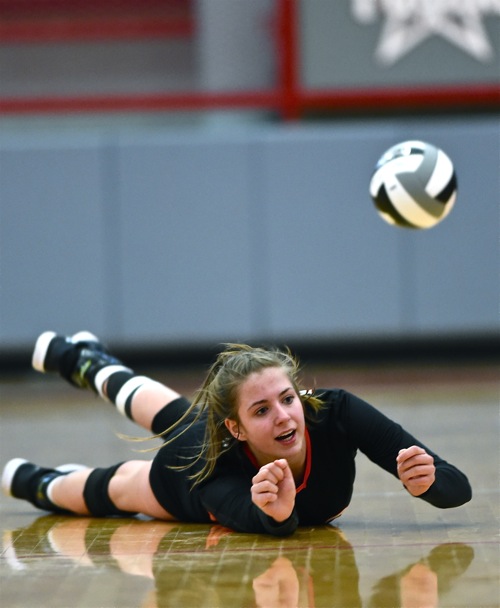 Jackson Center’s Raquel Kessler dives to save a point in the win over Cincinnati Christian.

“But this is a totally different thing,”  said a smiling coach, Kim Metz, who leads the state of Ohio in most tasks taken on by a coach.  Not just limited to development of talent and game strategy, she also drives the team bus for the Tigers.

“We had a very productive and aggressive summer, but you never count on being in this position again after losing the people we lost from last year,”  she said.  “We’ve had some injury issues, there’s been some doubt, and the league has been so competitive his year.  But the kids just kept on pushing through, and it’s a completely different team.  Everyone’s excited about beating Jackson Center, of course, but it’s a completely different team.  Different kids, different dynamics.  There’s just been a lot of different scenarios.”

Still, the Tigers have used the scenarios at the expense of would-be opponents like Cincinnati Christian, abusing the unsuspecting with their efficiency in getting the ball in position to score, and extending points on defense, disrupting, discouraging, and ultimately turning mistakes into advantage.

“Absolutely, the strength of our schedule and competition is a big advantage for us,”  admitted Metz.  “I used to drive down there (Cincinnati) to see for myself what they were doing, because you just never know on a given day what an opponent is capable of doing.” 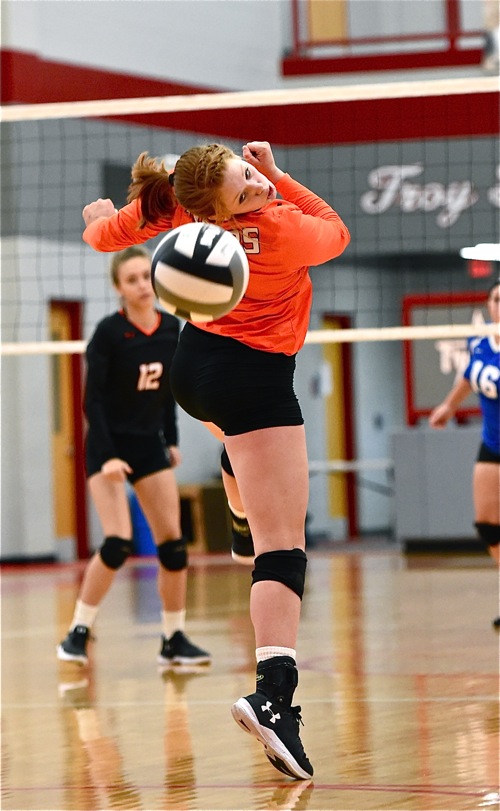 Is that thing in? Katelyn Sosby looks over her shoulder to see if a Cincinnati Christian shot was in bounds, or not.

But when posed the question if she drives down there to scout anymore, she smiled and said, “No, I don’t do it anymore, and I feel guilty, because I want to see everyone.  I appreciate every coach for the hard work they do.”

But the fact of competition was a comforting factor in the mind of players like Raquel Kessler.

“This was very exciting for us, because we lost so many starters from last year and it’s nice to see us all come together,”  said Kessler, a junior.  “They’re a very scrappy team, but with the kind of competition we’re accustomed to playing I just thought we wanted it more.”

Finally, if Russia and Jackson were impressive in the manner in which they played, they put all that more pressure on Loramie in the nightcap with with Miami Valley Christian Academy (17-6) to be just as efficient.  The SCL had not lost as much as a set all day, and Loramie picked up the challenge immediately to match.

MVCA never knew what hit ’em, despite a raucous student cheering session that kept saying, “We’ve got this.”

Loramie (16-9) ran out to an immediate lead, finished the first match with a 20 point advantage, and then punctuated that dominance by jumping out to an 11-1 start in the second set.  They came at the MVCA Lions from all corners of the court – offense, defense – and with contributions from every position and class.  And at the end of the day, coach John Rodgers could only smile and mention that a freshman, McKenzie Hoelscher, had caught his attention for the way she had seized the moment – a freshman, with so much on the line! 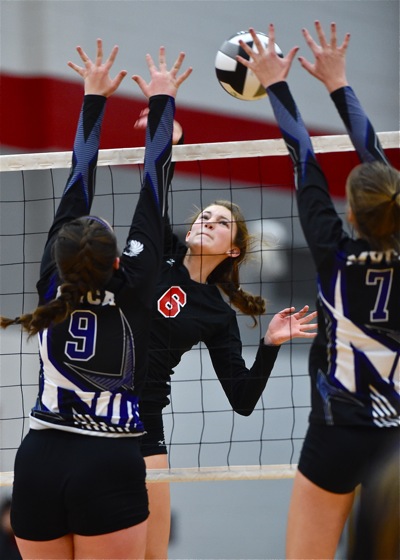 Loramie freshman McKenzie Hoelscher caught the eye of her coach for her performance against MVCA.

“She’s really gettin’ it,”  Rodgers said of his freshman hitter.  “She’s going to be something special.”

But he also paid tribute, as had Aaron Watkins and Kim Metz, to the competition in his league, and his area, for bringing his team to the district round with the confidence to win in such a convincing manner.

“To their position,” he said of MVCA, “you play your league and you play who you have to play.  But for our part I always try to schedule the best competition available.  I choose to schedule matches we could lose because it makes us better when we get to this setting.”

John Rodgers, former state champion, said that quietly as his team received their district awards.  But he didn’t have to convince any of the people who drove from Butler and Hamilton County and witnessed the kind of dominance displayed by a league whose reputation is polished by its ability to beat both the suspecting, and the unsuspecting.

They had seen.  They believed.  And they admitted as they left the building that what they had seen from three Shelby County League schools was a league apart from that which they were accustomed – a league that hadn’t dropped a set all day.  Not one set in three matches!

As for Russia, Jackson Center, and Loramie, better competition awaits in the regional round, including #1-ranked New Bremen.  And that’s fine.  They wouldn’t have it any other way.  They’ve seen it before.

It’s how business is done…in the Shelby County League. 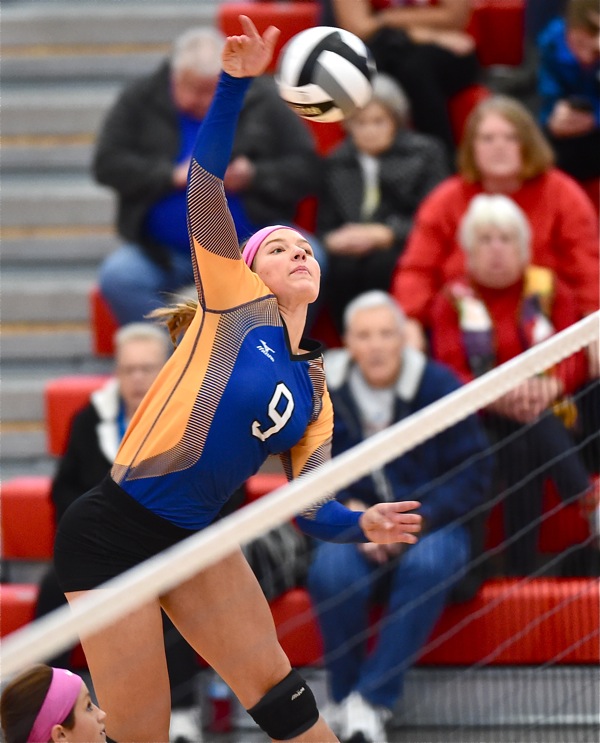 Russia's Laurissa Poling registers one of her 18 kills against Riverside in the Raiders' straight-set match win in the Saturday's Division IV finals. (Press Pros Feature Photos by Sonny Fulks)