The Flyers clamped the jaws of life on Butler in the second half, outscoring the Bulldogs 17-0 and rescuing a big hearted 27-22 victory on a brisk and blustery Saturday afternoon at Welcome Stadium.

DAYTON — If nobody revealed the final score to a University of Dayton football fan who didn’t attend the game and only recited the final statistics — first downs, rushing yardage, passing yardage — that fan would shake his head sadly and say, “We got our helmets handed to us, didn’t we?”

The Flyers played Butler University and the Bulldogs were fresh from knocking off two Pioneer Football League teams that were undefeated in league play on back-to-back weeks. And they had won three in a row.

Forget the second half, this one is h-i-s-t-o-r-y, right?

Well, there might be a reason both Dayton and defense begin with the letter ‘D.’ The Flyers clamped the jaws of life on Butler in the second half, outscoring the Bulldogs 17-0 and rescuing a big hearted 27-22 victory on a brisk and blustery Saturday afternoon at Welcome Stadium. 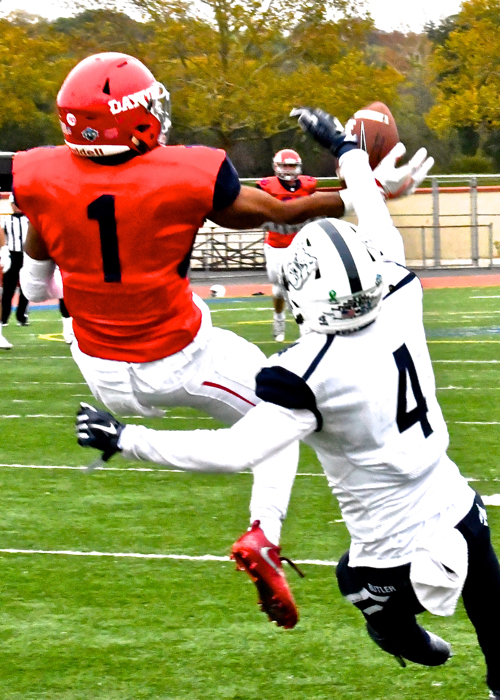 The Flyers’ defense, wearing pride on their sleeves, shut the Bulldogs down on only 137 yards in the final 30 minutes and zero points.

Butler came in with the best turnover ration in the PFL, a plus-10. They don’t turn over the ball. The Flyers took care of that with three pass interceptions.

There were two illustrious thefts by the Flyers defensive secondary. With Butler already on top, 22-10, the Bulldogs were at the UD eight with six seconds left.

Butler’s passing quarterback, Will Marty, aimed one goalward and UD’s Tim Simon picked it off, saving the Flyers from trudging into the locker room down 29-10.

Butler’s running quarterback, Sam Schrader, tried to fool the Flyers by throwing a pass. His toss was intercepted by UD’s David Leisring at the 12, the life preserver the Flyers needed to preserve their massive comeback. 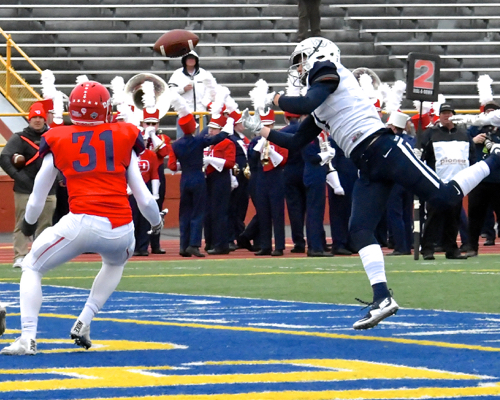 Flyer Tim Simon saved a touchdown from the Butler Bulldogs by intercepting a pass in the end-zone.

It was fitting that Leisring, a 6-foot-1, 200-pound junior safety from Cincinnati St. Xavier, pulled off the last big play. He made 11 tackles, 10 solos.

And Tim Simon, the 6-foot-2, 200-pound red shirt freshman from Morton Grove, Ill., the safety who made the end zone interception at the end of the first half, led the Flyers with 12 tackles.

Simon was not a starter until Leisring was ejected from the Drake game four weeks ago for targeting and Simon stepped in and was no Simple Simon. He was all over the field making big plays, including two interceptions that earned him PFL Defensive Player of the Week. And he hasn’t stopped. 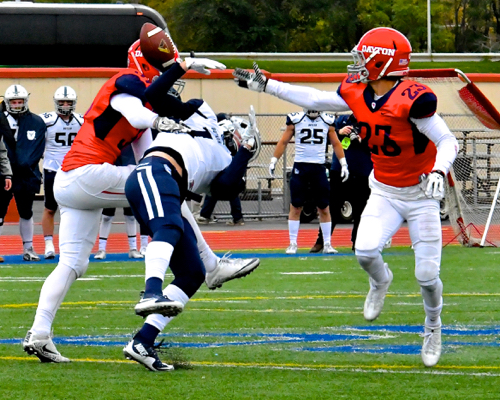 Of his interception at the end of the half,” Simon said, “It was a play away from me so I just wandered over to help out because my guy wasn’t doing anything, so I saw the ball in the air, tipped it and caught it.

“The first half we were just shocked by their speed,” said Simon. “But the second half we just grouped together and trusted each other. Our coaches just do a great job of getting us prepared and giving us a great game plan and all we have to do is execute.”

Of the second half defensive turnabout, Leisring said, “It was just the energy we brought back on the field for the second half. We made a few adjustments, but for the most part they ran the plays we thought they’d run.

“It was just getting used to that style of offense, which was a little bit unorthodox,” Leisring said. “It took a couple of quarters to get used to it and then we could really execute and make some plays in the second half.”

Butler’s two quarterbacks and man-in-motion offense was awesome in the first half. Passing quarterback Will Marty was 18 for 28 for 267 yards, but two interceptions. Running quarterback Sam Schrader led Butler’s rushers with 67 yards on 17 carries and two touchdowns.

After Butler’s first touchdown Flyers and Company blocked the point after attempt.

“Two quarterbacks and they do it right,” said UD coach Rick Chamberlin. “They don’t care if you know they are going to pass with one quarterback and run with the other. We’re going to get it done. That’s one of the best offenses in the conference and they’re clicking right now.

“We made some mistakes on a couple of big pass plays in the first half, but we made some adjustments at halftime,” said Chamberlin. “It wasn’t anything different they were doing, our guys just made some mistakes. I’m always proud of our guys, but I told them after the game how proud of them I was that they didn’t give up and did the job in the second half.” 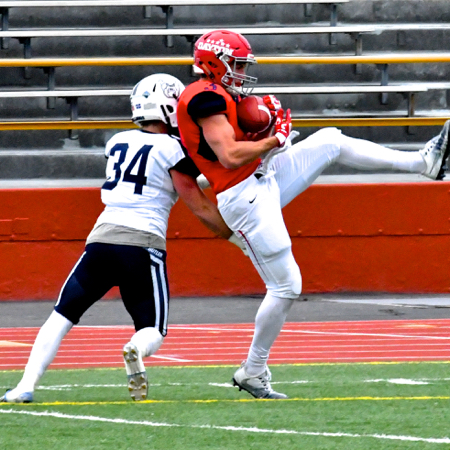 A completed pass to Flyers wide receiver Ryan Skibinski for a first down.

“I have to give credit to those guys because both are great quarterbacks,” said Leisring. “Each one brings something different to the table, something unique. It took a real cumulative effort from us to really stop those guys.”

And about his game-saving interception on the next-to-last play, Leisring said, “It was a running back wheel route, so I had to stay put on the back side. We saw that in their offense a few weeks ago and we’ve been practicing against that so it was part of our game plan.”

The Flyers began their comeback by taking the second half kickoff from their 36 to the Butler one, where an unsportsmanlike conduct penalty pushed them back to the 16 and necessitated a 32-yard field goal by left footed freshman Allan Waltz, cutting Butler’s lead to 22-13.

Early in the fourth quarter the Flyers moved from their 29 to the end zone, ending on a 2-yard-touchdown pass from Alex Jeske and Adam Trautman. The drive was highlighted with a 41-yard pass from Jeske to Jack Euritt.

That gave the Flyers a 27-22 lead that Leisring preserved with his interception and UD moved to 4-and-5 on the season, 3-and-3 in the PFL. 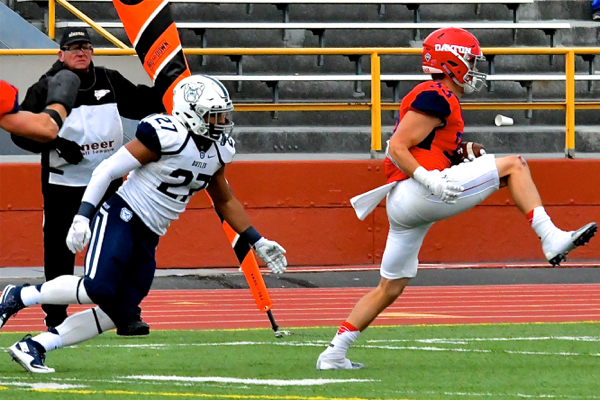 Safety David Leisring’s interception sealed the deal for a win over the Butler Bulldogs with seconds to go on the clock.