They weren’t perfect, but it didn’t matter.  A dominating defensive effort and the big hitting of New Bremen swept the #1-ranked Cardinals past #3 Ottoville in Division IV sectional semi-final.

Well-contested through the first 15 points of the first set, the rest of the match wasn’t that close.  After pulling away to take the first, Bremen started the second by scoring the first 10 points (10-0) and never looked back.

“They’re really good,”  said a surprised Kramer afterwards.  “I didn’t expect to win it in three sets.  We missed a lot of serves tonight, but every time we got the ball across the net they were out of system and they really couldn’t set their big guns.  They never got into any flow offensively.

“My mentality as a coach is I’d rather miss the serve than to have them pass it, set up, and crush it back over the net.  That’s an extreme, of course.  We actually did a very good job serving…except for our seven thousand misses tonight.”

There was nothing extreme about the defensive effort of the Cardinals;  along with the big hitting of Michigan recruit Paige Jones, Rachel Kremer, Diana Heitkamp and company.  One seering shot after another by the Cardinals kept Ottoville pinned back and on their heels, adding to their inability to get into a confident offensives profile of their own. 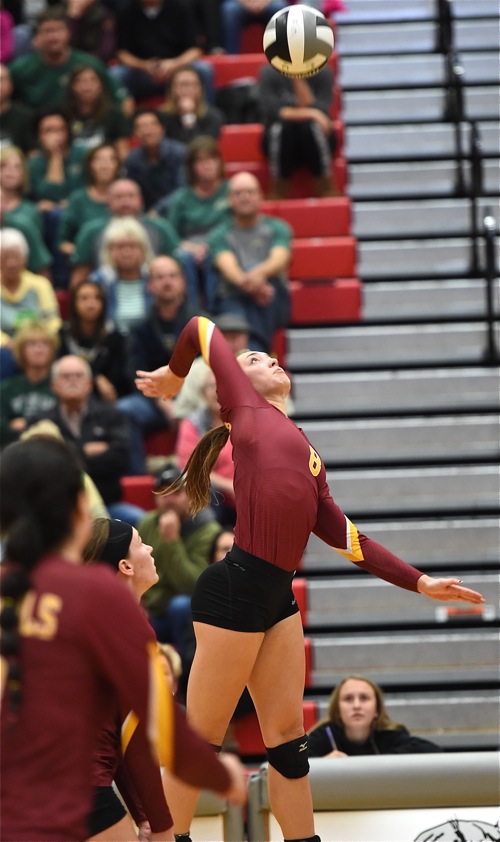 “Of course Paige puts a lot of pressure on teams from the front row,”  added Kramer.  “But last year people discovered that she puts just as much pressure on them from the back row with her hitting, as well.  She makes everyone on our team so much better.  I couldn’t be more proud of her, game in and game out.

The difference at the net was Bremen’s ability to elevate and create a more severe shooting angle, leaving the opposing blockers defenseless.  Where Ottoville was able to get head and shoulders above the net…Jones delivered her blistering volley with head, shoulders and torso above the net.

“We got up there and swung hard,”  admitted Jones.  “We played scrappy defense all night and we weren’t timid.  We’ve practiced pinning shots so we’re harder to read, and that helps keep teams on their heels.”

And the ease with which they won surprised even Jones.

“Honestly, I didn’t expect a three-set match.  We knew they were a good team because we played them during the summer and it was close then.  I know they competed well against Coldwater, they were ranked #3, so no, this was a surprise.” 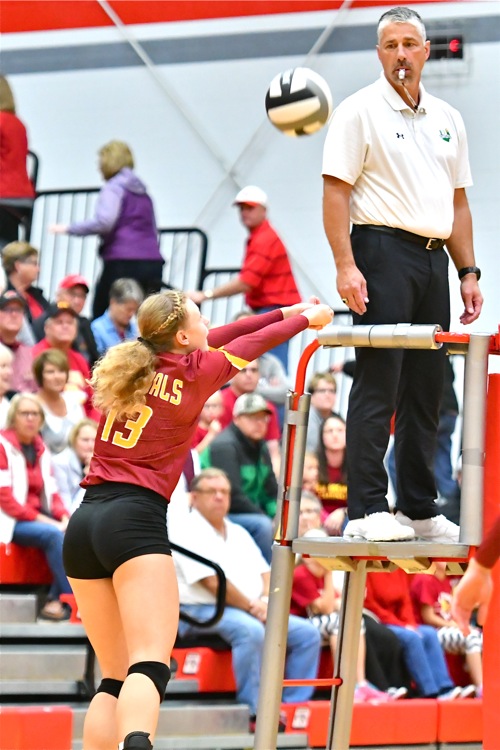 Elli Roetgerman has the full attention of the tower official. (Press Pros Photo by Julie Wright)

Beating a team of that ilk also serves as a huge confidence boost to the #1-ranked Cardinals…if they, indeed, needed a boost!

“Most definitely it is,”  said Kramer.  “It gives us a lot of confidence.  We know that we control our own destiny, and if we show up every night and play the way we know we can play we won’t lose.”

Strong words, but Kramer’s players hardly back down when it comes to confidence.

“I’m always nervous when I come into a game, so tonight my nerves were a little bit more high,”  added Jones.  “But it could be also your last game, so you push a little harder to make sure it isn’t.”

So no, it wasn’t their best statistically, collectively or individually.  Paige Jones led them with 20 kills, along with 11 digs and 7 service aces.  Madison Pape contributed 22 assists…and Abbi Theiman chipped in 14 assists and 11 kills of her own. It was more than enough to offset the seven thousand missed serves;  and it left the disappointed Lady Green squad literally seeing red.

And at this point of the year that’s all the Cardinals want people to see.

Blake Snider (right) got enough hand on the ball to keep it in play.  (Press Pros Photo by Sonny Fulks)