The Rockets couldn’t have played better in the first half, only to see the roof cave in from a total turnabout in the second half.  Anna drops a heart-breaker to Coldwater.

Coldwater –  Anna coach Nick Marino was hoarse, and for that matter, speechless.

Up 14-0 at halftime, after a near-perfect 24 minutes of football, he lost his voice and who knows what else in the second half of Friday’s game at Coldwater as he watched the 7-2 Cavaliers come from behind, outscore the Rockets 21-7 in the final 24 minutes, and turn what would have been a dream outcome into a nightmare.

In truth, it was perhaps the most significant conference game against the likes of six-time state champion Coldwater, and nine-time state champ Marion Local, in the Rockets’ decade-long tenure as football members of the Midwest Athletic Conference.  Ranked #1 Region 20 of the OHSAA Division V poll this week, it marked an opportunity to prove their relevance against the likes of the state’s best in a showdown scenario.  It started well.   But the way things finished were another matter.

“We just made too many mistakes,”  whispered Marino.    “We gotta’ play better.”

And they did play well at the outset, striking right out of the chute on a 63-yard pass play from Travis Meyer to Caleb Kauffman to make the score 7-0…before the stragglers even got to their seats.

Exactly six and a half minutes later, the Rockets cashed in again on a Riley Huelskamp touchdown run of eight yards to make it 14-0.

That was the offense, of course, while the Rockets’ three-man defensive front was giving the Coldwater fits at the line of the scrimmage.  They bottled up the run attack, confused everyone in orange and black, and seemed to have things right where they wanted them with the final possession of the half.  Only…they missed a field goal from 30 yards that cost them points on the board, staggered their momentum, and left Coldwater the slightest reason to believe they could fix things during the twenty minute halftime.

“We did just that,”  said quarterback Sam Broering.  “The coaches made the adjustments necessary and we came out with a lot better idea of how to attack that three-man front.”

And what they did was a little trickery, to boot.  A flea-flicker – handoff to the running back, who then turns and tosses it back to the quarterback, who then hurls it downfield and behind the secondary to a wide-open receiver.  That happened to be Jacob Wenning whose 44-yard reception did the trick, alright, and that’s how the Cavaliers started their third quarter.  It set up an eventual touchdown catch by Sam Broering from Caleb Dippold at the 7:14 mark to cut the margin to 14-7.

On their first possession of the fourth quarter they tied it, on a 1-yard run by Wenning, and suddenly…you could feel the air leaking from the balloon. 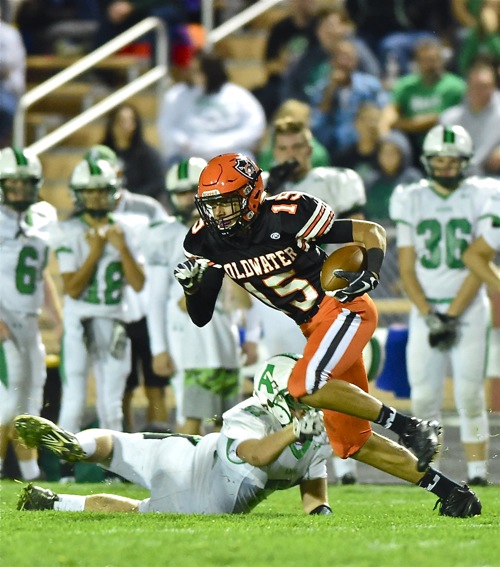 But…on the ensuing kickoff, Aidan Endsley, one of the most dangerous run threats in the MAC, gathered the ball at the 10 yard line, cut diagonally across the field to the far sideline, and outraced everyone to the end zone to retake the lead for Anna at 11:01, 21-14.

Wild…and of course, on the ensuing Anna kickoff, Coldwater’s Jacob Wenning nearly broke it to match Endsley’s run;  but he was dragged down at the Anna 35 yard line to set up Wenning’s second touchdown of the night, within 60 seconds of the Anna score…an eleven yard burst to tie the game at 21-21.

Now the balloon was literally hissing, and on the Coldwater kickoff someone laid a massive lick on the ball carrier, the ball popped out, the Cavaliers recovered…and well, you might guess the rest.  Wenning scored his final touchdown of the night on a 4-yard run, to conclude things at 28-21.

As dominating as Anna was in the first half, Coldwater adjusted to take everything away and establish dominance of their own in the second.

“We just had that blank look on our faces in the locker room at the half,”  said Broering, who did a masterful job of managing the comeback. 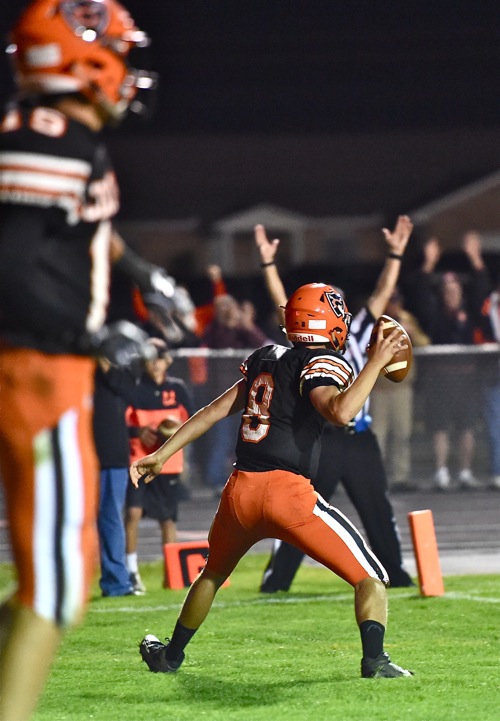 Sam Broering looks to the official for the sign before celebrating his third quarter touchdown.

“We made some changes to account for the three-man front.  We calmed down.  We changed our routes, and I just made some adjustments to get the ball to our inside receivers.  We always take pride in how we can make the adjustment, because it seems we have to do it every single game.  Tonight was huge for us.”

What was huge was the offensive dominance of Coldwater in the second half.  They completed (for the game) 23 of 31 passes for 265 yards, and parlayed that into 378 total yards, compared to 306 for Anna.

And after get their offensive line play in gear in the third quarter, the Cavaliers ended up outgaining Anna 113 to 80 on the ground…mostly on the work of Wenning, who finished with 65 yards in 18 attempts.

Jacob Wenning had huge numbers through the air, grabbing six catches for 128 yards, and a long of 44 yards.

Anna’s one-two running punch of Endsley (64 yards) and Huelskamp (44 yards) was complemented by an efficient effort from quarterback Travis Meyer, who completed 10 of 17 attempts for 217 yards and that one 63-yard touchdown to start the game.

Chip Otten breathed a huge sigh of relief.  Seldom in his coaching career could he remember a more satisfying tale of two halves in a football game.

“To be honest, I didn’t feel that great about making an adjustment against that 3-man front, but it basically comes down to making plays,”  said Otten.  “After we got that first score you have the mindset that you’re only down a score…and then a couple of things happened to change the momentum.  We went back to a more basic run game with our counters, and the offensive linemen got their blood up and said let’s run it right at ’em.” 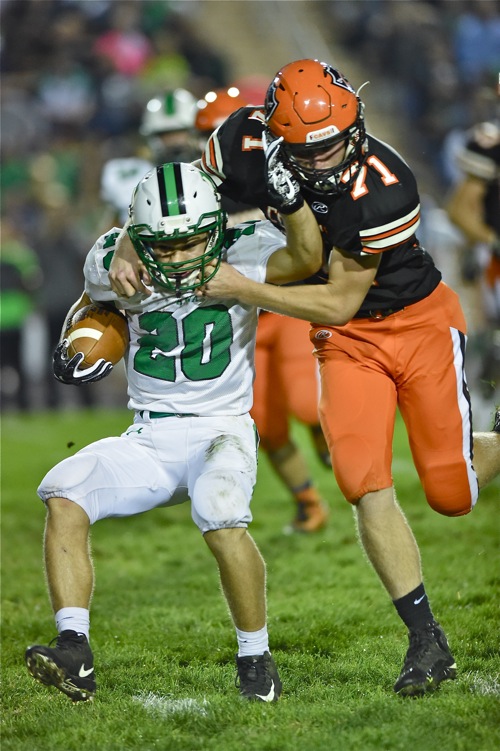 Which is exactly what turned flipped the game, along with a huge turnover by Anna on the fumbled kickoff…and in Otten’s opinion, the missed field goal at the end of the first half.

“Yeah, that was big thing for us because it kept us just two scores behind.  There’s a big difference in going in two down, or three.”

“We might have panicked a little soon, too, with the play-calling…trying to go to the air more than we needed.  Once we went back to some smash-mouth football our whole attitude changed.  They won the line of scrimmage in the first half, but we definitely took it back in the second.  I guess if you were a fan that was a heckuva’ game to watch.”

“Yeah, and it probably does get a home game,”  added Otten.  “But you play who you play in the playoffs and you know if you want to go anywhere you have to go through Marion (who won handily over St. Henry Friday).  That’s obviously a big challenge, but tonight was a pretty big challenge, too.”

Anna’s season is hardly over, of course, finishing next week against Minster, and fully in control of their own post-season destiny.

And hopefully Nick Marino’s voice returns after a vigorous post-game conference with his huddled team.  He’s gonna’ need it by Saturday morning.  Films should be interesting.

And guess who’ll be doing the most talking? 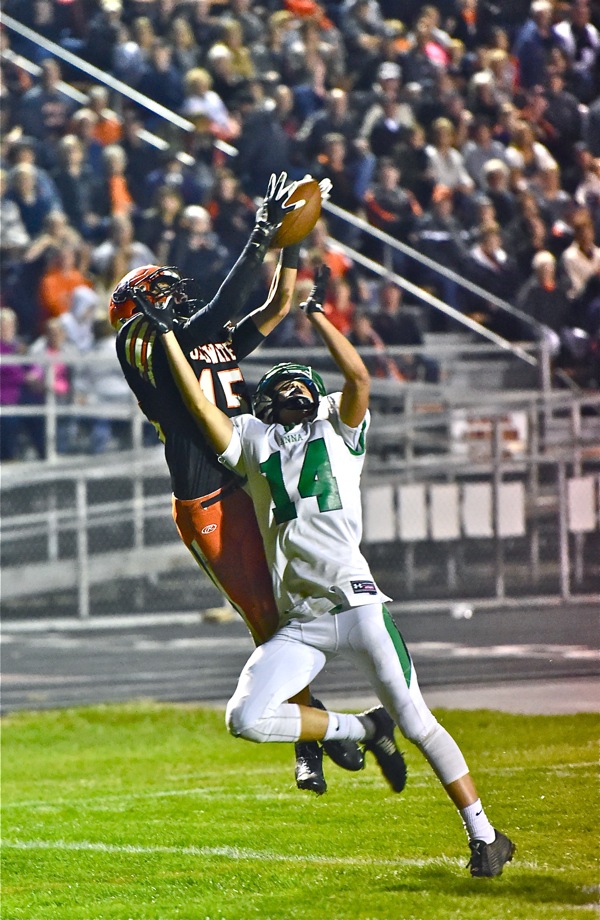