The Scarlet team took a commanding step, winning four of the five fall series games with a 7-6 Saturday finale.  But the question was afterwards:  Who, why, and where were the biggest points of improvement?

Columbus – Officially, the Scarlet and Gray fall series ended Saturday on a positive note for the red team.  They won it in the bottom of the seventh inning on a sacrifice fly to center field, allowing sophomore Conner Pohl scored from third base to give the Scarlets a 7-6 win, taking four of the five games played over the past week.

The pitching star on Saturday was senior Adam Niemeyer, who fighting injury throughout his Ohio State tenure, is hoping to hold things together for one final successful run in 2018.  His line on Saturday was impressive:  4 innings, 1 hit, no runs, 3 strikeouts, and no walks.  He could not have been better.

The hitting star was redshirt freshman Matt Carpenter, who followed his three-hit performance in Friday’s 17-3 blowout with another three hits on Saturday, complemented by flawless play at shortstop.  The Aurora, Ohio native has been impressive throughout the fall camp, and will compete with transfer Kobie Foppe for a significant share of time at short come spring.

The Scarlet team won it with 7 runs, 9 hits, and committed one error.

The Gray team lost it with 6 runs, 9 hits, and committed two errors.

But the bigger issue following the game were questions posed to Greg Beals as to what he saw in the six weeks of fall ball that give him optimism for the next ten weeks of inactivity before ramping things up in January.

“Well, the first thing would be the attitude of the players this fall,”  said Beals.  “There’s a sense of urgency that’s been created as a unit.  There’s more energy.  And whether we’re getting hits or not, we’re running the bases hard, we’re attacking the game, and we’re making things happen.  I’m very pleased to have seen that.  Very critical for me to see that as a coach because these are things they’re doing on their own. 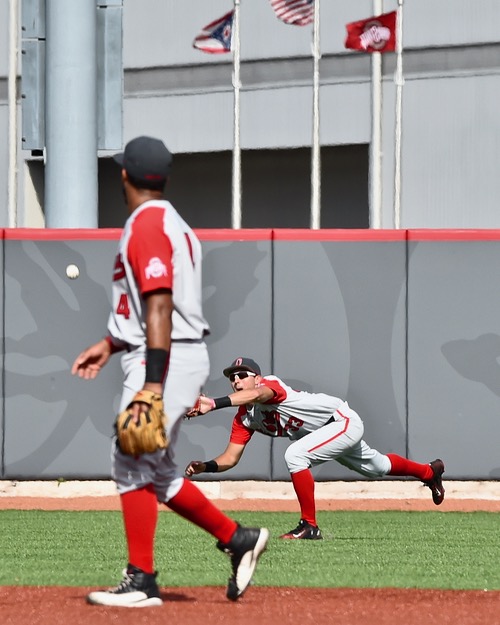 “The second thing would be our two transfer guys that came in to play defense up the middle – Malik Jones in center field and Kobie Foppe at shortstop.  I’ve really happy with how they’ve molded and meshed with the team, primarily because of their defense, but they’ve contributed on offense, as well.

“And last, the evolution and transition of Brady Cherry as our second baseman.  I hate to touch on individuals, but I’m really happy with Brady Cherry.  He has redefined himself.  He’s more relaxed out in the middle of the field.  He has the range and arm to be successful, and I just think the position lends itself to him athletically better than third base.  He’s been solid and I expect a good spring from him.”

If there is one concern for Beals coming out of the camp…it’s the still  the uncertainty of his pitching staff, particularly his rotation starters.

“No, we still have questions as to the starting pitching.  We really wanted to see Ryan Feltner come in and pitch with the success he had in the Cape Cold League over the summer.  He played in the best summer league in the country and didn’t give up a run all summer.  He gave up 11 in the first inning last night.  He has the talent, but you wonder how in the heck does that happen?

“It’s apparent that Yianni (Pavlopoulos) and Adam (Niemeyer) are going to battle for one of the weekend rotation places.  And Connor Curlis came out of a good summer and was even better with what he showed us here in the fall.  He was outstanding.

“What I don’t worry about is our bullpen situation, starting with ‘Mr. Do-Everything’, Seth Kinker.  A lot of those guys out there have pitched important innings before in the Big Ten Tournament two years ago, and I’m really eager to mix and match things come spring, because I think they’re going to be a strength of our team.”

The names he lists leaves a certain hollowness, however, because from a starting pitching standpoint they’re exactly the names in the mix at the end of last May.  There will need to be an infusion from someplace, or someone, and from the looks of new arms this fall – a Seth Lonsway, an Alex Theis, and Andrew Magno – that’s certain to happen.

Finally, every fall camp has a list of new faces that show up and surprise – known as the “Who-Da-Thunk-Its”.  Beals was asked to share his impression on who surprised him, and why.

“Well, Matt Carpenter would be a possibility, but he works so damned hard I wouldn’t think of him as a “Who-Da-Thunk-It”.  I mean, he goes out there and earns it every day.  He’s really had a good fall for us.”

“I think of someone like Griffin Smith, a left-handed freshman pitcher.  He’s done a really good job this fall.”

“And I continue to put Conner Pohl in that category, because from the time he came in last year, to where he is now, to what he will be in another year if he takes the next step…he’s just that close to ‘dude’ status.  I mean, he’s a dude already, but if he makes the next progression he’s going to be a serious ‘dude’.

As we wrote last week, there were more smiles this fall than last.  The expectations are certainly different;  there are not six starters to replace, lost to the major league draft.

And that sense of urgency that drives the group, the one that pleases Greg Beals so much…that fire is certain to burn from now to January.

“It’s just been a great camp,”  says Matt Carpenter.  “This is a great group of guys, individually and collectively, they all have the same goal, and they all care about each other.  Everyone got a lot of reps, and everyone is ready to go out and get after it.”

And that’s all you can ask.  Fall ball is over.  And this…is what you take into winter. 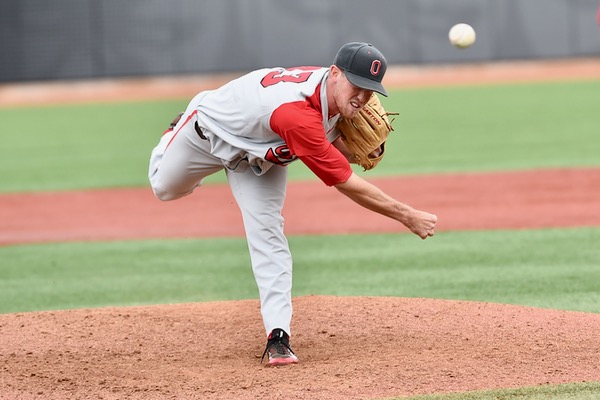 Senior Adam Niemeyer was the pitching star of the day, throwing four innings of 1-hit baseball, while striking out three. 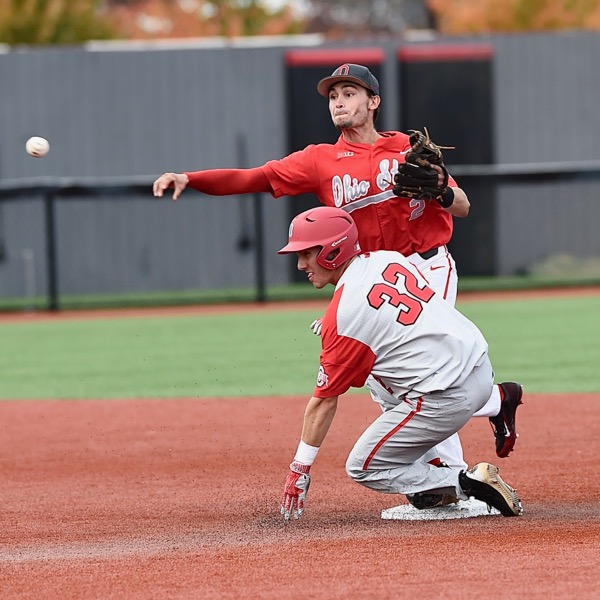 Spirited play and competition for playing from new faces like Kobie Foppe (above turning the double play) made this fall camp a positive harbinger of better days to come. (Press Pros Feature Photos by Sonny Fulks)