Lincoln, NE – Ohio State would have had plenty of justification for a sputtering effort on offense against Nebraska — perfectly valid reasons to point to if the unit performed at something less than its best.

For starters, well, there was a new starter. Junior Demetrius Knox, last seen whiffing on blocks in emergency duty in the playoffs a year ago, replaced right guard Branden Bowen, who suffered a broken leg last week. It’s the first time in coach Urban Meyer’s six years that he’s had to make an offensive-line change during the season because of an injury.

The Buckeyes also lost their No. 1 play-maker, hybrid back Parris Campbell, after he was hit hard on the third play of the game. He was fine, just a little dazed, but the team’s leading receiver spent the rest of the night on the sidelines.

And while the offense has been flexing its muscles of late, putting up 62, 56 and 54 points the last three games, the opponents basically were Wynken, Blynken and Nod. This was a significant step up in competition. Yes, the glory days for the Cornhuskers are long over, but they were playing at home, at night, knowing full well their season was on the line.

The Buckeyes, though, scored touchdowns on their first eight possessions, cobbling together lengthy drives while building leads of 42-0 and 49-7 on their way to a 56-14 victory Saturday.

Barrett was masterful, going 27-of-33 for 325 yards and five TDs. He also rushed for two more scores as fans spilled out of Memorial Stadium with each end-zone celebration like air from a punctured raft.

The receivers ran crisp routes and caught everything. The line provided clean pockets and opened holes. And Barrett looked more poised and confident than he has in at least three years, reminiscent of that QB who finished fifth in the Heisman Trophy race as a freshman in 2014.

Raise your hand if you thought that kind of offensive display was possible after the first two weeks of the season.

To review, the Buckeyes had mustered 16 points at home against Oklahoma, trailed at halftime against Indiana the week before and, going back to the last three games of 2016, had exactly one well-played half on that side of the ball out of a possible 10.

But the ever-improving Barrett toyed with the Nebraska defense as the Buckeyes produced 633 yards and set a record for Cornhusker opponents with 41 first downs.

Maybe our expectations were too high after the arrival of new offensive coaches Kevin Wilson and Ryan Day. We were looking for immediate results, and perhaps we should have know the staff and players probably would need some time to mesh.

They’re operating at peak efficiency now, and that five-TD first half was practically flawless.

The opening series started at the 4-yard line and ended with J.K. Dobbins’ 52-yard run. The fabulous freshman (12 carries, 106 yards) looked as if he’d be cut off halfway there, but he flashed some breakaway speed to out-race a Cornhusker DB down the sideline.

The second possession began at the 13 and featured a pair of third-down conversions, including a six-yard TD run by Barrett on third-and-3.

The third series started at the 20 and ended with a patient Barrett finding K.J. Hill on a crossing route, which he turned upfield for a 16-yard score.

The fourth began at the 29 and concluded with Barrett dropping a 31-yard spiral into Terry McLaurin’s waiting hands at the goal line.

The fifth was initiated at the 41 after stopping Nebraska on downs and was capped by a three-yard run by Barrett, who finished with 48 yards on 10 carries.

The Buckeyes might have twirled the digits on the scoreboard even more in the first half if not for two Nebraska pass-interference penalties. Hill had beaten defenders on deep routes twice and probably would have scored if he wasn’t grabbed from behind.

After an open week, the Buckeyes host defending Big Ten champ Penn State on Oct. 28. And they probably shouldn’t expect to pile up points again like plucking fruit from orchard.

But something special seems to be brewing with Barrett and the boys. After many were wondering what it would take to get this offense started, opponents are now wondering what they can do to try to get it stopped. 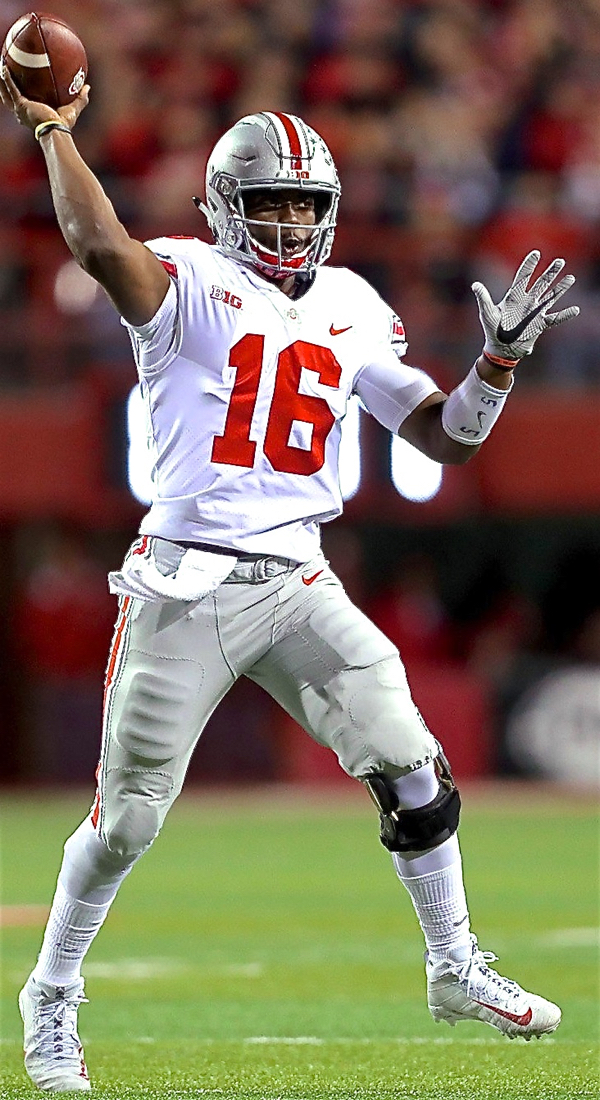