Stranded in the desert with a 0-0 tie in the first half, the game was still very winnable.  It was Camel weather…hot and humid and the Flyers just couldn’t get over the hump against the Campbell Fighting Camels.

DAYTON – As University of Dayton football coach Rick Chamberlin emerged from the post-game locker room Saturday afternoon at Welcome Stadium, his 7-year-old granddaughter Paisley, pretty in pink, ran to him, flung her arms around him and said, “I love you grandpa.”

What better way to assuage the pain and frustration of a tough and disappointed 17-7 defeat to the Campbell University Fighting Camels.

On this hot and humid afternoon, the Flyers just couldn’t get over the hump against the Camels, the Pioneer Football League’s first place team.

The game, though, was very winnable and for a half the Flyers had the Camels stranded in the desert, a 0-0 tie.

It was Campbell who came into the game with a lustrous defensive record. They came to Dayton ranked in the top 25 in 12 different defensive categories in all of the FCS.

They led the nation in defensive touchdowns (four), passes intercepted (14), red zone defense (.500 in stopping scores) and turnovers gained (20). They were second in stopping third down plays (.225) and they were. . .well, the message is clear — moving the football against the Camels is a precarious endeavor. 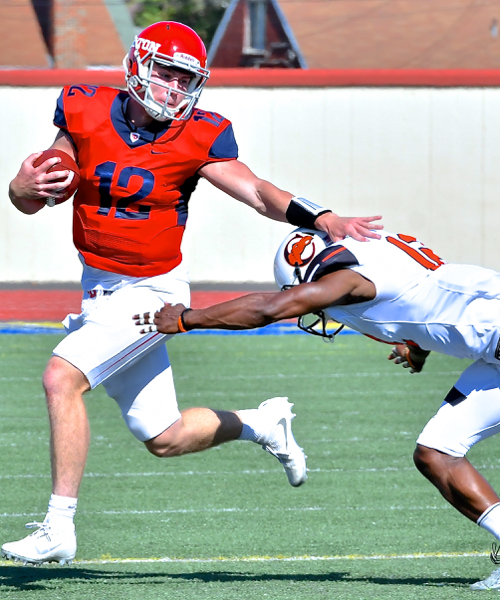 UD had the only real first half opportunity and it came on their second possession of the game. Runningback Tucker Yinger slashed 15 yards for an apparent first down at the Campbell 18.

But the Flyers were detected holding and from there moved backwards on another holding penalty and a sack of quarterback Alex Jeske.

Instead of first-and-10 at the 18, it was fourth-and-26, the distance from Welcome Stadium to Butler County, forcing a punt. 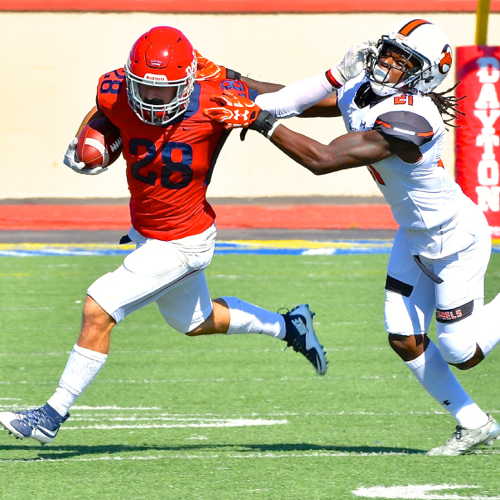 Tucker Yinger carried three times for 30 of the 31 yards, and finished the day with 113 yards on 24 carries, his fifth 100-yard game this season for the Flyers.

The Flyers held highly regarded Campbell quarterback Daniel Smith to 4 of 15 passing for 32 yards. He had 75 yards rushing in five carries, mostly scrambles.

That was not unusual. Smith, a red-shirt freshman, is a fleeing ghost when trapped. He came in with 868 yards passing with 11 touchdowns, plus 534 yards rushing and four more touchdowns, averaging more than 10 yards per carry.

In addition, wide receiver Aaron Blockmon caught 1,038 receiving yards last season, more than double the school record. In the first half Saturday, he had zero catches.

The Camels, now 4-and-0 in the PFL, asserted themselves in the second half. They took the second half kickoff and steadily moved 83 yards in nine plays, taking only two minutes and 13 seconds to score.

The touchdown was a 20-yard pass from Smith to Blockmon. Along the way Smith ran for 25 yards on one play. At the end of the run UD’s Christian Searles stripped him of the ball but Smith’s teammate, Trey Sanders, fell on it at the UD 33.

The Flyers quickly tied it, 7-7, taking the kickoff after Campbell’s touchdown 76 yards in 14 plays. Along the way, quarterback Alex Jeske converted a fourth-and-two at the Campbell 35 moving it four yards to the 31.

From there it was running-back Tucker Yinger. He carried three times for 30 of the 31 yards, including a 16-yard burst to the 1-yard line. Alex Kenner, on his only carry of the day, crashed in to tie it, 7-7. 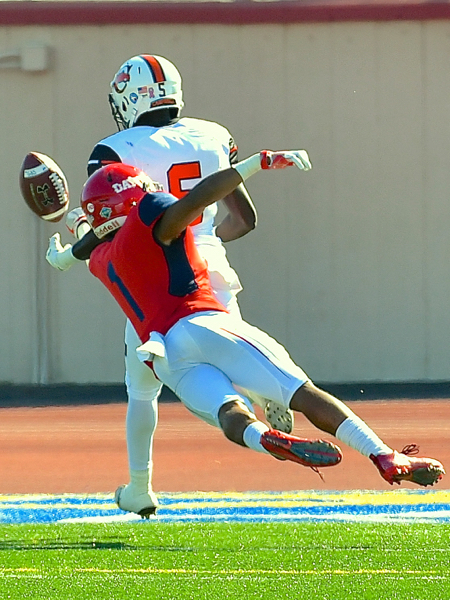 Flyer Christian Searles saves a would-be touchdown by knocking the ball loose from Campbell’s Jaquan Brooks at the goal line.

Campbell took the lead for good early in the fourth quarter, moving 80 yards in eight plays with Smith hooking up again with Blockmon, this time for a 36-yard score and a 14-7 lead.

Campbell clinched it with four minutes to go when a Jeske pass was tipped and Campbell’s Gerald Wilkes intercepted at the Flyers 26 and that led to a decisive field goal.

Jeske later had another pass intercepted late in the game as the Flyers tried desperately to get back into the game.

Quarterback Smith ended up with 169 yards on 17 carries, many of them scrambles. Blockmon caught four passes for 74 yards and both touchdowns as Smith finished 15 for 32 for 212 yards and two touchdowns.

“We were able to move the ball some (382 yards total offense), but it just came down to us beating ourselves today,” said Chamberlin. “We had chances, but we had balls dropped (one a sure touchdown), penalties when we were in the red zone, blown assignments on defense that allowed both touchdown scores.

“We didn’t get dominated, and the score shows that, but we beat ourselves,” he added. 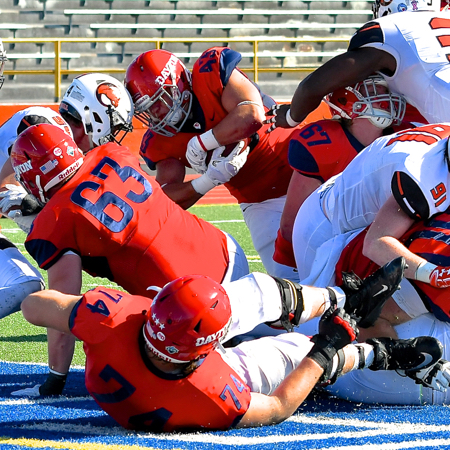 “Our goal every year is to have a winning season and we can still do that,” he said. “We need to do it out of pride. Our players are embarrassed right now about how things are going for them.”

Chamberlin was mystified over the costly errors and mistakes and said, “We want to play Flyer football, which we haven’t done too many times this year. We had a great week of practice, the guys were into it, our execution was very good. It just didn’t translate into Saturday.”

“In the first half, we were playing defense and our kicking game was keeping them pinned back (Sean Smith punted eight times for a 43.9 average), but in the second half it came down to bad tackling.

Of Campbell quarterback Smith, Chamberlin said, “His passing is good enough, but it is his running ability that is such a threat and he proved that in the second half.” 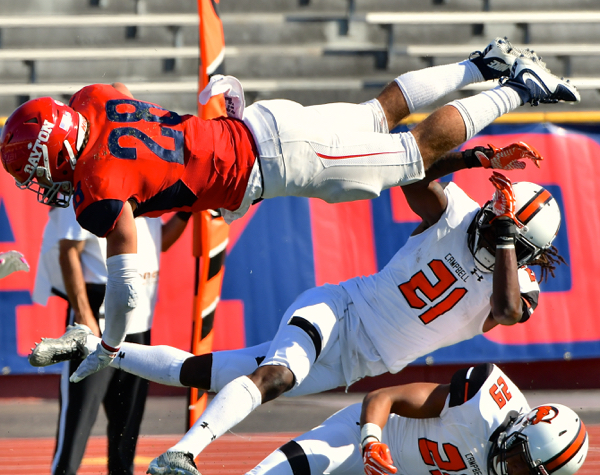 Flying for the Flyers, Tucker Yinger misses crossing the goal line by inches. 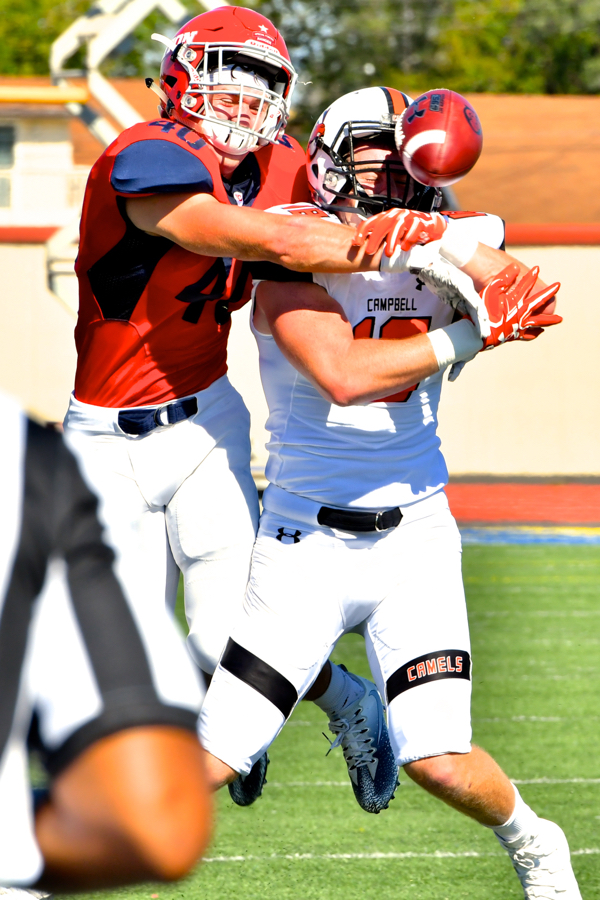