One For The “Gimper”: Anna Delivers The Payback To St. Henry

Tied for second with four games left in the regular season, Anna advanced the notion of their being a legitimate title favorite with an impressive win over St. Henry.

St. Henry – At 5-1, the St. Henry Redskins mathematically were a certain game better than they were at the same point of the season last year when they beat the Anna Rockets, in Anna, in overtime.

It was, in the estimation of some, the pivotal game of their season, even with an eventual loss to eventual state champion Marion Local, because it certified their post-season credentials.  It was a confidence-builder.

So it came as no surprise at all…that in a conference known for paybacks and the unexpected, Anna (6-1) returned that favor (?) Friday night with a “hard-earned”, unexpected, and frankly ‘shocking’, 21-19 win over the Redskins in St. Henry (5-2).

One sideline observer said it best, perhaps, when he mentioned that statistics didn’t do justice to the game, or the way Anna won. “This was a game of hearts and hard work.  Numbers don’t matter in a game like this.”

And, it was a game of surprises, as Anna and coach Nick Marino suited up, and braced up, quarterback Travis Meyer after missing last week’s game with Marion with an ACL sprain.

Meyer turned out to be a flesh-and-blood confidence-builder;  enough, in the words of teammate Riley Huelskamp, to inspire the Rockets to their best win of the season – and the best win of Marino’s tenure as head coach at Anna.

Disappointing for St. Henry? In a word, yes. And in coach Brad Luthman’s words: “They just kicked our butts. They ran the ball. We couldn’t stop it. We couldn’t run the ball. And then we lost the battle of special teams. Now that’s three pretty terrible things to lose in a MAC football game.”

And Riley Huelskamp was a central figure in the running part, compiling a hundred-plus yards and the game’s first score at the 7:51 mark of the first quarter.

But St. Henry came back on their next drive to tie things with a 17 yard touchdown pass from Daylon Lange to Zach Niekamp at 1:17. 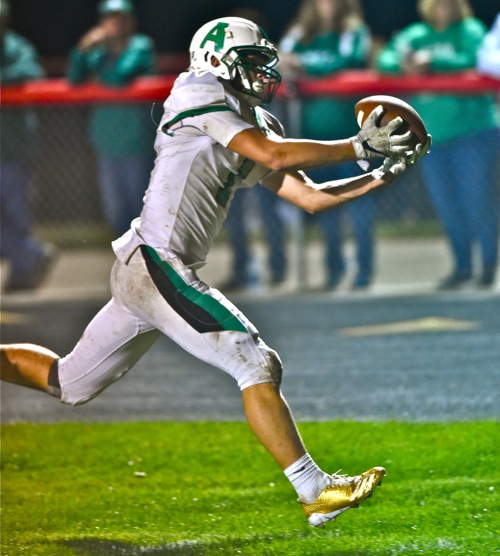 The Redskins looked sluggish on a warm humid night with at times a bit of fog assembled over the Redskins’ playing field. And yet, they finally got the passing game going when Lange hooked up ten minutes into the second quarter with Ryan Bruening for a 27-yard TD pass to take a 13-7 halftime lead.

A point of emphasis: The PAT attempt by Ryan Luttmer was no good, and that trend would come back to haunt St. Henry at the end.

Whatever Nick Marino and his coaching staff talked about in the halftime dressing room got things going in the second half; and it didn’t take long.

After exchanging punts on their respective first possessions, Anna blocked the punt attempt of Luttmer on the ‘Skins second possession, setting up a point-blank scoring opportunity from the 28 yard line. Five plays later Anna’s Aidan Endsley crossed the goal line, the kick WAS good, and the Rockets took the lead for good, 14-13.

They increased their lead on the next possession when Meyer, who was noticeably more comfortable moving around on two sore knees in the second half, found Austin Fogt on a post pattern for 38 yards and another touchdown.

Down by two scores, St. Henry simply could not run the ball, as they were continually stymied at the line of scrimmage by Anna’s more active interior front. That didn’t deter Daylon Lange, however. 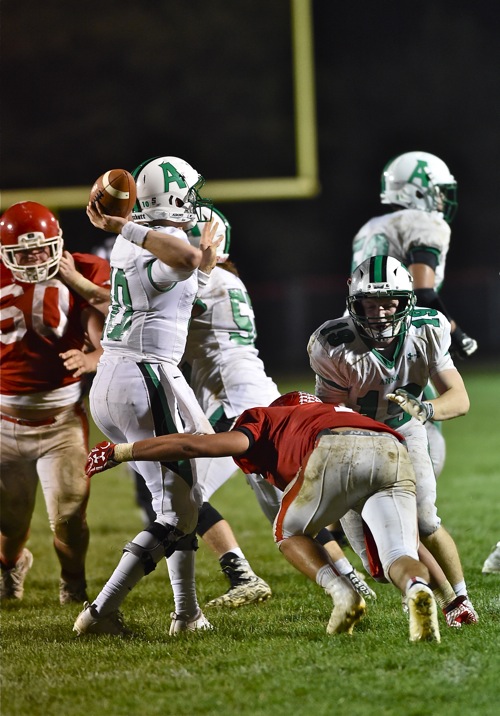 Timid to begin the game, Tavis Meyer picked up steam throughout; while St. Henry struggled to bring pressure.

Lange continually bailed them out on critical third down conversion to extend drives, and at 7:15 of the fourth quarter he got the Redskins back within striking range with a 22-yard touchdown pass to Niekamp, who just barely made contact with the goal line pylon before going out of bounds. They then went for the two-point conversion to tie the score…but that was no good.

The two teams exchanged punts twice, before St. Henry set up shop 70 yards away with 3:38 remaining. Lange was good again, extending drives and making accurate throws on the run to move the sticks. He took his team all the way to the Anna 18 yard line before finally missing on a third and five third down pass, setting up what should have been a go-ahead field goal by Luttmer.

But kicks are what they are; and for whatever reason, the snap was good…the hold was good…but the kick was not. Wide right! 21-19…FINAL.

“Proud of our guys because we worked our butts off for this win,” said Marino, very aware of the irony of who they had beaten, and how they had done it.

“We played hard, and we had to. We made a lot of big plays, and we had to. This was the toughest we’ve played this year, by far.  And then we were all praying for that field goal to miss, and things went right for us tonight. They’re a good ballclub and it came down to that kick.”

Alright, we won’t go into stats, but statistically Riley Huelskamp was a ‘stud’, able to get to the corner and break contain all night long. He got his hundred yards, and a bit more, but was more impressed with how the Rockets took care of the business up front.

“We won the line of scrimmage. Our linemen are tremendous,” said Huelskamp. “But we also had a good practice all week long; and we had our starting quarterback back with us. That helped the offense tremendously. 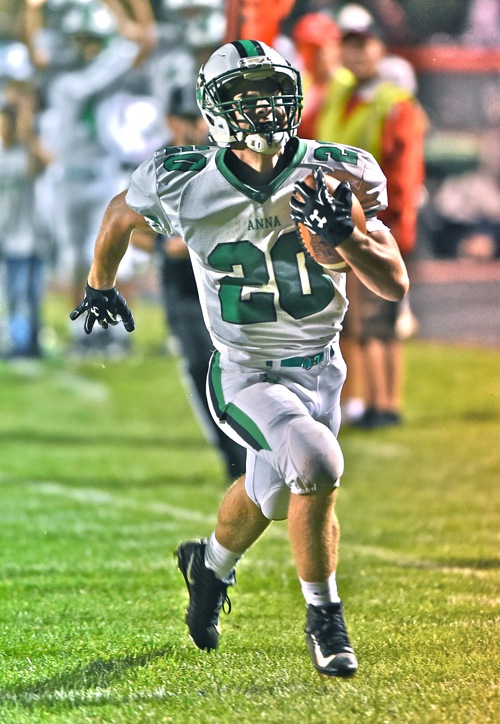 Anna’s Riley Huelskamp got his hundred yards and the first score of the game on this 20-yard run.

“We weren’t one-dimensional tonight,” added Huelskamp.  We were two-dimensional and we pretty much did what we wanted to do. And the kick at the end? I was praying God that it would go wide.”

As for having their starting quarterback return, Travis Meyer would admit that he didn’t know what to expect:  and he was a little gingerly at the outset.  But, he wanted the opportunity to see for himself more than concern for his injured knee.

“It was a team-first decision,” said Meyer, softly. “I didn’t want to let them down. I wanted to come back because I think we have some special going on and I wanted to continue with it.

“At the beginning I was definitely unsure about how well I could play,” he added. “But after I got through the first series I knew I was good.”

It will go down as the shocker of the week in the MAC, as things begin to sort themselves out for the league title; and for playoff seeds in the respective divisions V, VI, and VII. Marion, Coldwater, Anna, and Fort Recovery all won key games Friday night.

But if you believe in karma; and if you believe in the power of suggestion, that having your quarterback is that important to a high school football team, you can literally chalk Anna’s Friday win as…one for the “gimper”.

That would be Travis Meyer, of course. And guaranteed, he won’t care about the pun, or worry about a knee. They do have something special going on in Anna. They’re ‘braced’ for anything now with three weeks remaining and Marion Local and St. Henry behind them – just as long as Travis Meyer is available.

Friday he threw caution to the wind.  Whatever comes, the ‘gimper’ just wants to be a part of it! 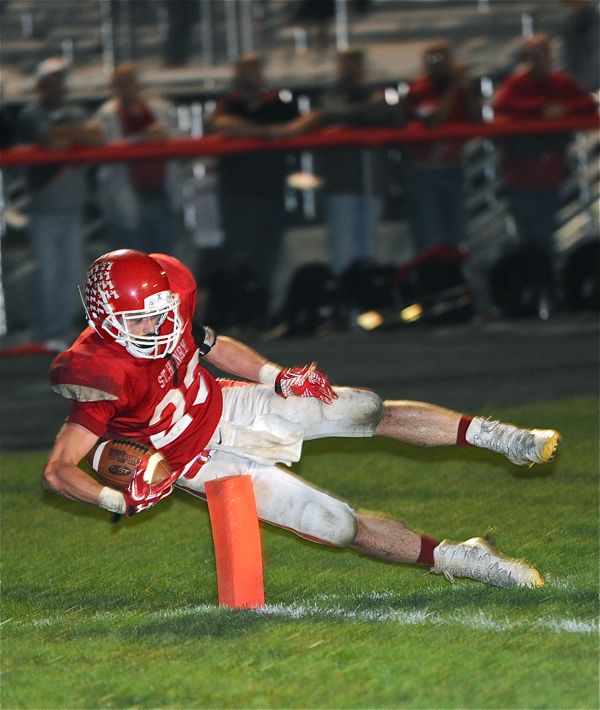 Zach Niekamp barely got inside the pylon for this fourth quarter score that brought the margin to 21-19. Or did he? 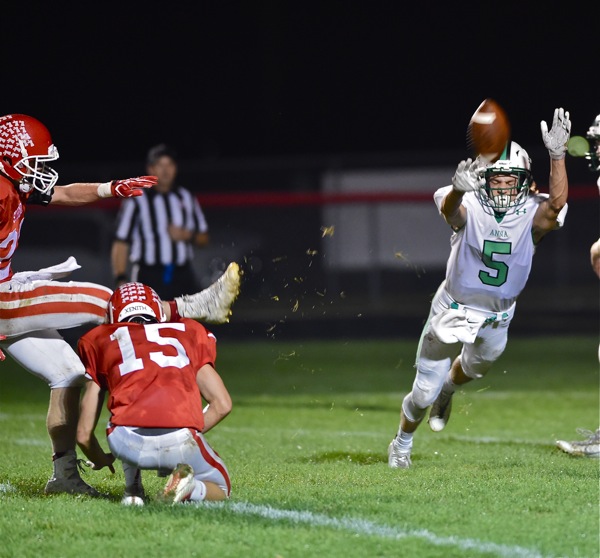