Dayton took advantage of the Alex Jeske’s return at quarterback, while the Flyers’ defense put the clamps on the PFL’s top-rated passer for an impressive road win over Drake.

DES MOINES, Ia. – Drake Stadium is home to the Drake Relays, one of the most prestigious track and field events in the United States and maybe the world.

It is also the home field of the Drake University football team, a team wearing broad smiles Saturday afternoon when the University of Dayton football team arrived for a Pioneer Football League game.

Based on a previous knowledge and surveillance, Drake figured it would stage a football version of a track meet — run up and down the field unencumbered.

After all, UD’s passing defense for five weeks had been a leaky faucet against a steady stream of golden-armed quarterbacks. And Drake’s quarterback, Grant Kraemer, was platinum-armed, the PFL’s No. 1-rated passer.

Even the Drake media relations department was optimistic and wrote in the pre-game notes, “The Bulldogs will have an opportunity to take advantage of Dayton’s struggling pass defense. The Flyers rank seventh in the PFL, allowing more than 260 yards passing per game. Meanwhile, Drake leads the PFL in pass offense with 295 yards per game.”

Not so fast, ladies and gentlemen.

The Flyers had a stunning surprise for Mr. Kraemer, the Drake media department, and the Drake football team.

UD put up a defense to rival the Great Wall of China. It was Civil Defense at its best as the Flyers shut down all air lanes en route to a 20-10 victory.

Drake came in with a 2-and-0 PFL record to Dayton’s 0-and-2. But the Flyers had a ton of stuff ready, including the pass defense and the return of senior quarterback Alex Jeske, who missed the first five games with a broken foot.

Kraemer completed only 12 of 40 passes for 188 yards. Before the game, UD coach Rick Chamberlin said, “Kraemer is a take-charge guy, but he takes chances, too.”

So true, so true. The Flyers intercepted four of his take-a-chance passes, two by backup safety Tim Simon, making his first appearance on defense this year. Why? Because UD’s leading tackler this year, David Leisring, was ejected from the game early on a dubious targeting call.

“My parents, grandparents, a brother and five friends were all here,” said Simon. And no-one knew he would even play, let alone pick two. “I hadn’t played a play on defense all year and coach told me to just keep it simple and focus on the keys and the little things and big things happen.”

Chamberlin smiled after the game and said, “We talked about that this week, about affecting the quarterback, not allowing him to be in rhythm. He (Kraemer) is a gunslinger who thinks his arm is strong enough and accurate enough that he can do all those things. But it comes back to bite him sometimes.”

About Simon’s two interceptions after stepping in for Leisring, Chamberlin said playfully, “He played well. The picks, he came up on run support, made some nice hits and I told Leisring, ‘We should have got you out of the game sooner so we could have had Simon in there.’” No, he wasn’t serious, but he sure was appreciative of Simon’s simple and effective approach.

In addition, the Flyers blocked a field goal attempt (Nick Surges) and recovered a fumble on a punt, the fumble forced by Christian Searles and recovered by Andrew McCormick. 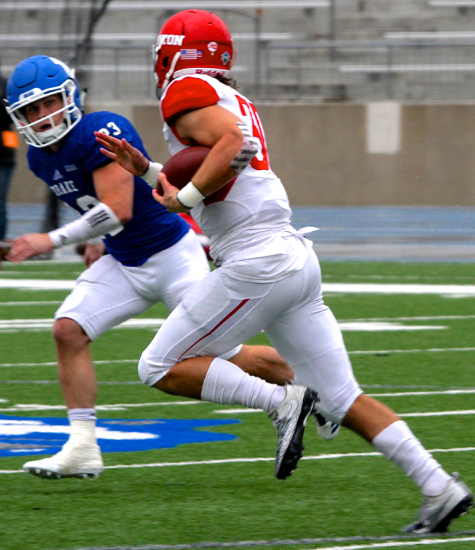 Sean Prophit scrambles for yardage in the Flyers’ Saturday win over Drake.

On this day, the U.S. Navy and all its ships at sea couldn’t have put up a better defensive blockade.

While the Flyers were putting Reynolds Wrap around Kraemer, UD quarterback Alex Jesle was easing his way back into service. He started the game explosively, hitting wide receiver Ryan Skibinski for a 33-yard pass completion on his first play from scrimmage this year.

That was a false omen. He spent the rest of the first half shedding rust and each team punched a field goal for a 3-3 first half.

UD’s field goal came from Allan Waltz and it was his first kick of year. The left footed freshman lost a tryout for the job the last week of practice, but was given the job this week. He missed another try, but nailed a 20-yarder with five minutes left in the game to push UD’s lead from a precarious 17-10 to a comforting 20-10 lead.

The Flyers also have a left-footed punter, one of the best in the country. Sean Smith punted seven times Saturday, one for 63 yards and another for 60 on a chilly day in a constant rain.

After the 3-3 battle of futility from both sides in the first half the Flyer took quick and decisive command in the second half — Jeske, running back Tucker Yinger (101 yards for the day) and the O-line on offense and the defense stepping up with all four interceptions in the second half.

The Flyers received the second half kickoff and covered 75 yards in five plays in the blink of an eye. Yinger had a 12-yard run and Jeske hit Matt Tunnacliffe with a 42-yard pass on which Tunnacliffe caught while tumbling to earth on his back. That put the Flyers at Drake’s seven and Jeske ran it in on the next play for a 10-3 lead.

Then with seven minutes left in the third quarter, Kraemer tried one of his take-a-chance plays. He scrambled around his own backfield with several Flyers in close pursuit. Just as he was about to be sacked, he tossed a rainbow prayer high into the air. The recipient turned out to be UD’s defensive end Nick Surges at the Drake 31.

Then came a strange sequence.

—It was first-and-goal at the seven and Tucker Yinger ran it in for a touchdown. But, no. The Flyers were caught holding.

—It was second-and-goal at the 14 when Jeske hit Yinger for eighth yards to the six. But, no. The Flyers were penalized 15 yards for offensive pass interference.

—Now it’s second-and-goal, 29 yards from the end zone. Jeske didn’t mind. On the next play he found Ryan Skibinski in the left corner of the end zone and nestled a pillow-soft pass over the heads of two defenders and into Skibinski’s hands for a touchdown. That made it 17-3 and the Flyers kept Kraemer’s arm tied behind his back to score the victory.

Jeske clearly outdid Kraemer — 12 for 22 for 197 yards and a touchdown with no interceptions.

“I was real excited just to be back and I just wanted to help out any way I could,” said Jeske. Of his 29-yard TD pass completion to Ryan Skibinski, Jeske said, “Ryan ran a good corner route and had good leverage on the safety so I just threw it up where only he could get it and he ran under it.

“Our defense did an absolutely great job,” Jeske added. “A lot of times we didn’t convert in the red zone, which is something we need to work on, but the defense always had our backs, giving us the ball back in position to score.”

Said Chamberlin of Jeske, “You saw what he meant to us. He is still not all there yet, but he can make some plays, both running and throwing the ball. His pass to Skibinski? What a touch, what a touch. And the deep ball passes. Just to have Alex in there and our guys’ confidence in his throwing is great.”

The Flyers are now 2-and-4 overall and Chamberlin said, “It was the big plays today when we needed them and we haven’t done that in those losses. The picks, the big catches, the third down conversions. We got those today and we haven’t been getting them.” 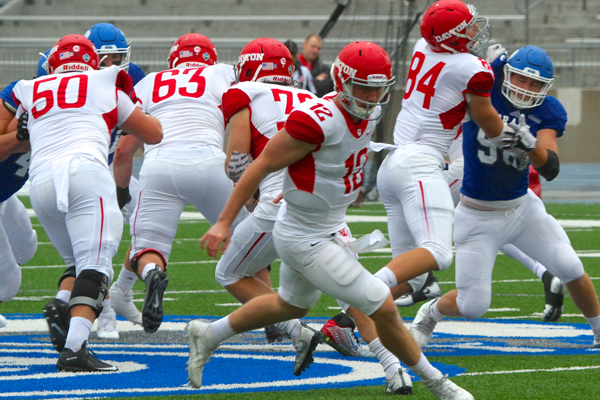 Alex Jeske’s outplayed Drake’s top-rated passer, hitting on 12 of 22 attempts for 197 yards and a touchdown. 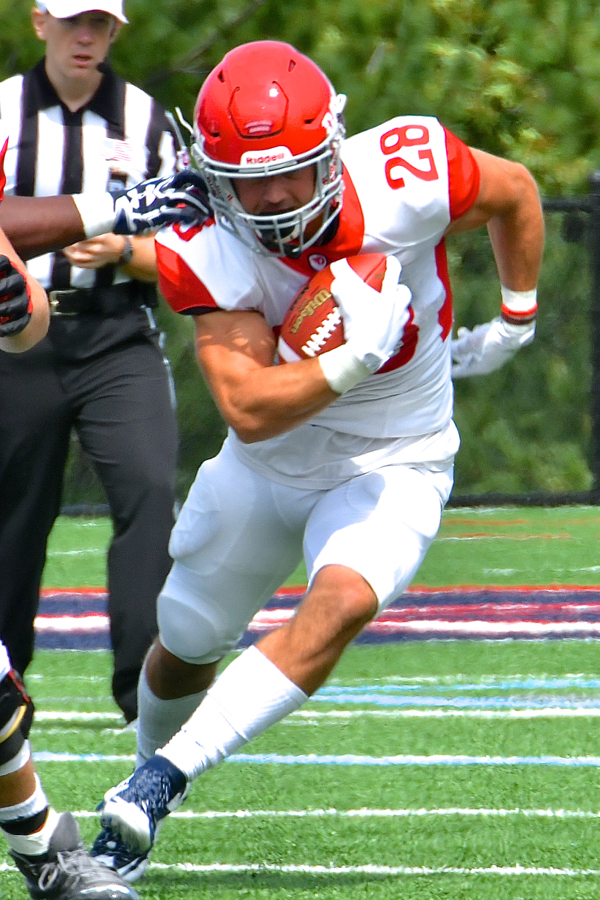 Tucker Yinger and the Flyers' offensive line took quick and decisive command at the start of the second half. (Press Pros Feature Photos compliments of justin.bohn@drake.edu)