No Rockets’ Red Glare…Marion Upends Anna In Test Of Unbeatens!

Missing starting quarterback Travis Meyer, the Anna Rockets went rather quietly, losing to Marion Local, and Jack Beuning, in the battle of the unbeatens.

Maria Stein – Undoubtedly, there were football fanatics from around the area, and around the state, who were searching twitter and the internet for a score of the anticipated Anna-Marion Local game Friday night.  With both teams unbeaten and vying for the outright lead in the MAC, it would have generated that kind of interest to the football die-hard.

But missing starting quarterback Travis Meyer, who’s out indefinitely with an ACL injury, the Anna Rockets didn’t create much intrigue in a 32-7 loss to the nine-time state champion Flyers.  As it turned out, coach Nick Marino might well have called Houston and told NASA that he had a problem, like Tom Hanks did in the movie.  There was no booster to his Rockets without Meyer, and with backup Bart Bixler filling in as best he could.  And Marion took every advantage possible.

The Flyers took the opening kick and promptly drove down the field to score, Henry Keller running it in from four yards out just four minutes into the game.

Six minutes later, at the 9:52 mark of the second quarter, running back Jack Buening would cross the goal line with the first of his eventual three touchdowns on the night.  Marion led 13-0.

But at 4:33 before the half, the Rockets and Bixler concocted their only true highlight of the night, launching a 33-yard scoring strike to receiver Austin Fogt, who wheeled and scored around Marion safety Tyler Prenger.  Marion 13 – Anna 7.

But with two minutes remaining before the break, Marion’s Matt Rethman took the ensuing kickoff and ran 77 yards to set up a third Marion score, a 10-yard Bruns to Nick Tangeman strike to make the score 19-7.  The only misfire all night for Marion was it’s apparent inability to make a point after touchdown.  They missed three!

The Flyers used their ground game, sensing that Anna could not sustain drives while rotating Bixler and running back Aidan Endsley at quarterback.  At 6:51 of the third quarter Buening bulled his way across the goal line again for his second score and a 25-7 lead.  The Flyers again missed the PAT attempt! 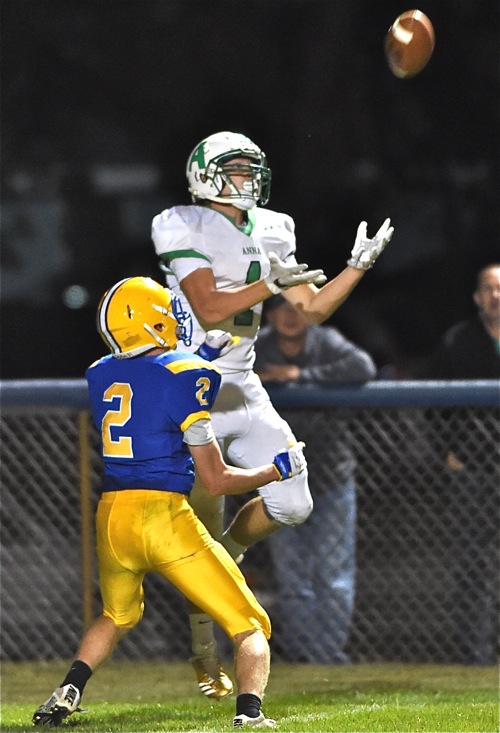 Anna tried everything to generate some offense.  Bixler handed off to Endsley and made the passing attempts;  Endsley would run from the Wildcat formation, but not as effectively as when he lined up deeper in the backfield.  And when he took the snap that close to the line…the Marion defense simply pinned him in.

In the meantime, the Flyers defense created turnovers – two fumbles and an interception – the final turnover setting the final score in the game, a 10-yard Buening score, his final, and the 32-7 concluding margin.

It’s good that Jack Buening plays football, because he would never make the debate team.  The 6’1″, 225-pound fullback is a punishing runner, but is equally punished when asked to talked about it.  He finished the night with 12 carries and 64 yards to add to his three touchdowns, but could barely bring himself to speak about any of it.

“We just wanted to get the running game started,”  he said sheepishly.  “I guess we took a major step tonight.”

Yes, but Jack, it had to be gratifying to get so many opportunities to help your offense and your team, right?

“Well, the line did amazing,”  he added, while signaling that he was done talking.

But it had to feel pretty good to add such a vital contribution to a much-anticipated game, and a much-appreciated win, right?

“I just thank the coaches, and thank the line,”  he squirmed.  With no further questions, he walked away the most relieved man in Booster Field. 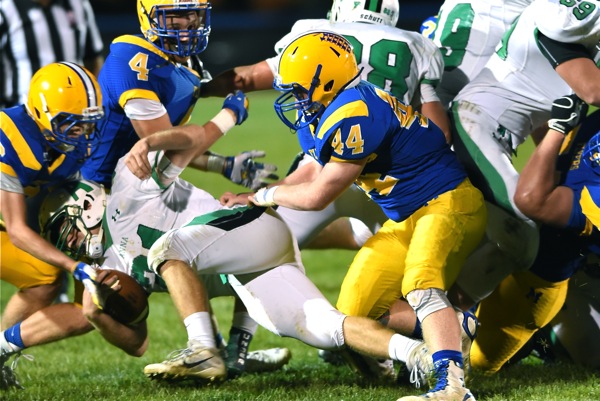 Marion’s defense did a good job of penning down Anna’s Aidan Endsley (#21, with ball).

To be sure, it was a complete Marion win, their sixth, over a team that until Travis Meyer went down, most opponents were highly wary of.

“There’s no doubt that missing him had a huge impact on their game,”  said Marion coach Tim Goodwin.  “But we’re happy with our game.  The kids played hard.  We were physical, and there’s no question we got better this week.  We had a good week of practice after the Versailles game, but give them some credit, too. They played us hard last week.  But we did have a better week of focus.”

The Marion defense again set the tone of the game, Buening’s three touchdowns notwithstanding.

“It’s too bad that Meyer’s out because he was having a really nice year,” said Goodwin.  “And their offense was tough as it is.  So you put a veteran playmaker like Meyer back there that can distribute the football it makes a big difference. It’s really too bad for him, and Anna.

“But to their credit they tried a lot of different things tonight.  They did everything they could.  They had a good plan.” 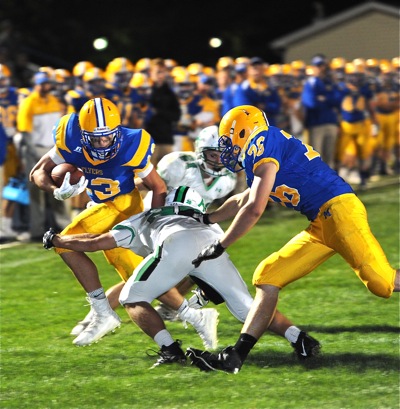 The one-two punch of Nolan Habodasz (above) and Buening gave Marion ground superiority.

And the turnovers helped Goodwin’s cause, and the Flyers, immeasurably.

But as Goodwin would concede, while it wasn’t the thunder and lightning game that so many anticipated, it demonstrated that this is a Marion team that is getting better offensively, and did it Friday night with the one-two punch of Nolan Habodasz and Buening, the 77-yard kick return by Matt Rethman, and a little trickery on a recovered onside (or squib) kick.  When Nate Bruns did pass, and it wasn’t often, it was only to remind that it was there when needed.

Marion finished with 352 total yards, and fully two-thirds of it was ground yards – Habodasz, Buening, Henry Keller (who scored the game’s first TD), and Rethman.

For several years now I’ve made it a habit to ask Goodwin at the midpoint of the season for a mid-term grade, or assessment of his team’s execution and efficiency.  Friday was his opportunity to pass out the marks.

“I guess I’d give us a B- or a C,”  said Goodwin after thinking a moment.  “We still have lots of room for improvement.”

Which for all those who tuned in to catch the anticipated outcome of Friday’s game, it serves as the annual warning that comes with almost every Marion Local team.  They’re 6-0, they’re getting better, and this year – knock wood – they’re very healthy.

Travis Meyer and the Anna Rockets should be so lucky.  Without that booster for their rocket…Anna has a problem! 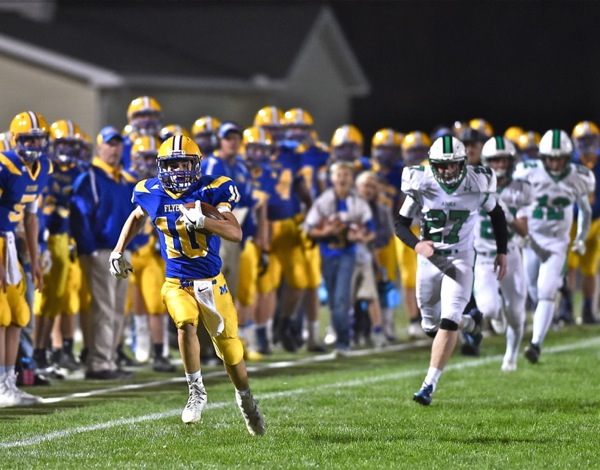 Catch me if you can...Matt Rethman sets sail down the sideline on a 77-yard kickoff return that set up the Flyers' third score. (Press Pros Feature Photos by Sonny Fulks)