Pennant Race Profile: Yianni Pavlopoulos, And To Be One Of Four….

It was the shining moment of a year otherwise lost for Buckeyes righthander Yianni Pavlopoulos and his teammates. That one day, back in February, when everything came up aces.

Columbus – Fall baseball practice for the Ohio State Buckeyes began last week, as Coach Greg Beals and his staff assembled “the boys” of spring, 2018, to begin the yearly ritual of bonding, and perfection of purpose.

There are always meetings; there are always reminders of things to improve, as well as things on which to build. There are reminders, too, that only two teams get to play in the final series of the year in college baseball, and every year, every team wants to be in the shoes worn by Florida and Oregon State last June.

Florida won the College World Series, two games to one, over an Oregon State team that set PAC 12 records in just about every category imaginable; and in particular, the Beavers set a modern record for winning percentage for the regular season (.928). And if you’re trying to do the math in your head, never mind. They won 52 of their 56 games played between the second week of February and the third week of May.

The ESPN broadcast crew made a big deal of that during the CWS telecasts, reminding viewers over and over that the Beavers were not used to being on the short end of scores, having lost on just four occasions during the regular season – three times to PAC 12 opponents, Southern Cal (April 29), UCLA (April 22), Washington (April 13)…and the Ohio State Buckeyes (February 24).

And on that day back in February, during Ohio State’s second weekend of the year, the Beavers entered the game with a 5-0 record, and ranked #1 in the country. Ohio State, coming off a split weekend in Florida the week before, was 3-3, and unranked. 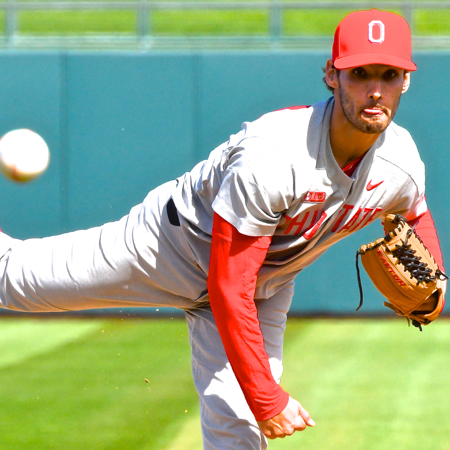 It set the stage for one of the unique accomplishments of an otherwise underwhelming year, and a disappointing reprise to the Buckeyes’ 2016 Big Ten Tournament title run and appearance in the NCAA tournament.

Junior righthander Yianni Pavlopoulos, trying to convert from the team’s closer in 2016, to one of its weekend starters in 2017, took the mound that afternoon in Phoenix, Arizona to improve upon a miserable start the week before against the University of Delaware.

“I didn’t give it much thought at the time,” said the senior from Chicago, Illinois this week, during a Buckeyes’ intra-squad scrimmage. “I just wanted to go out and improve on my start from the week before – throw strikes, keep the ball down, and rely on my teammates behind me.”

He got the help from his teammates, alright. They scored six runs for him in a 6-1 win, the crowning blow coming on a two-run homer in the sixth by third baseman Brady Cherry.

And defensively, the Buckeyes were sterling, making every play look routine.

But it was Pavlopoulos (Pav – lop – uh – lus), who surrendered just three hits, while striking out three and walking four against one of the nation’s most frightening lineups, that stole the limelight. Staked to a 1-0 lead in the top of the first, he made it stand until Cherry’s two-run homer in the top of the sixth gave him some breathing room. The Buckeyes added three more runs in the final three innings, but by day’s end – by season’s end – he would be an asterisk in the record book as just one of four pitchers all year to have beaten Oregon State during their record-setting season.

“My teammates had a lot of fun with it afterwards,” said Pavlopoulos. “I mean, five games into the season wasn’t a very big sample size. But after they went on and were undefeated over the next thirty games it began to mean more. The guys would put Oregon State’s record in my locker, something like 30 – 1, except they’d write, 30 – Yianni. We all joked about it, but it was pretty cool.”

And what does he remember about that particular game?

“You want to believe that you can beat anyone on any given day, regardless of pre-season rankings, and that’s the kind of mindset that I had,” Pavlopoulos offered with a smile. “It really doesn’t matter what’s on paper, if you go out and pitch, get some timely hits, and play good defense and you can beat anyone. 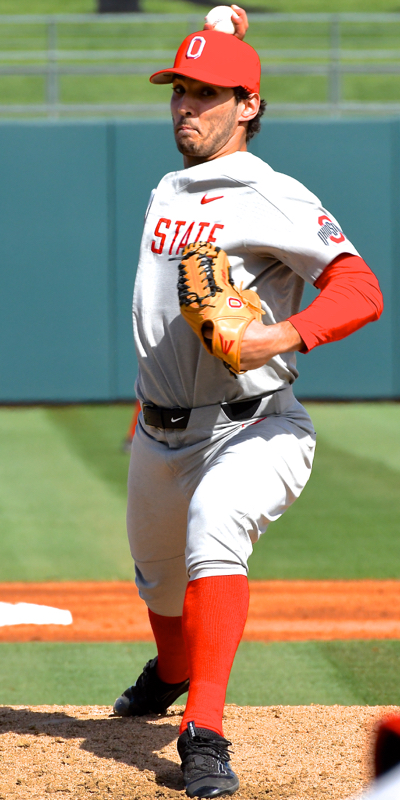 “It was one of those things that day where it really didn’t matter who we played. We just went out to play Buckeye baseball, and seriously, I really haven’t give much thought to it since.  I do remember that we made some really good plays behind me and Brady’s home run. What’s more impressive is to think about how good their pitching staff was, and how we went out and put up six runs against them.”

As it turned out, Pavlopoulos never really got to build on that afternoon in a season of ups and downs for the team, himself – and against Nebraska, two months later, he suffered a hamstring injury that would sideline him until the very last inning of the year, when he recorded the final three outs against Indiana.

He finished the year with a 2-5 won-loss mark, with a 6.53 earned run average, and frustrated with his inconsistency and bad luck.

“After the poor start I had against Delaware it was definitely exciting to bounce back and beat a team like Oregon State. Then things happened. I went back to the bullpen and just never really found a rhythm again after that. I changed roles a lot and as a team we were up and down.  Nothing really meshed.  I would have some good starts, appearances, and then some bad ones. Looking back now, it was a good motivator for this year. I want to come out and prove myself again, and as a team we all feel that way. Last year was not who we are.”

The question now is….would he rather prove himself for 2018 as a starter, or a reliever?

“At the end of the day it doesn’t matter as long as we’re winning ballgames. If I’m doing my job and we’re winning, I’m fine with either. When we had our meetings with Beals at the start of practice he made it a point to tell me that I’ve done both, and done ‘em well. As long as I have the mentality to be a good closer, and stuff you need to start, whatever suits the team’s needs is where I want to be.”

Armed with a high-80s fastball and a devastating breaking ball that he calls a ‘hybrid’ slider ( a “slurve”) his priority in fall baseball is to tighten up command of that breaking ball – to make it more effective as a strike one pitch.

“Sometimes it has more depth, sometimes more slide,” smiles Pavlopoulos. “I struggled to throw it consistently for a strike last year, and when you do that hitters simply take it out of the equation as something they have to fear. So this fall I definitely want to work on throwing it more for strike one to get ahead, then bury it when I need it for a strikeout pitch.”

Hope springs eternal in baseball, even in the fall.  And with the impressive array of talent onhand and a determined mindset to reboot, the talk around Bill Davis Stadium centers around…how do you come back from last year’s 22-34 record?

Well you certainly build on what you know, on what you’ve done that bears repeating. And for Yianni Pavlopoulos, you build on that one shining moment last February when David literally knocked off Goliath.

“That was cool,” he admits. “But it wasn’t the highlight of my time here. Nothing replaces winning the Big Ten Tournament the year before, especially when you can say you recorded the final out.”

So says Yianni, to whom the records proudly bear witness for 2017.  He was one of four! 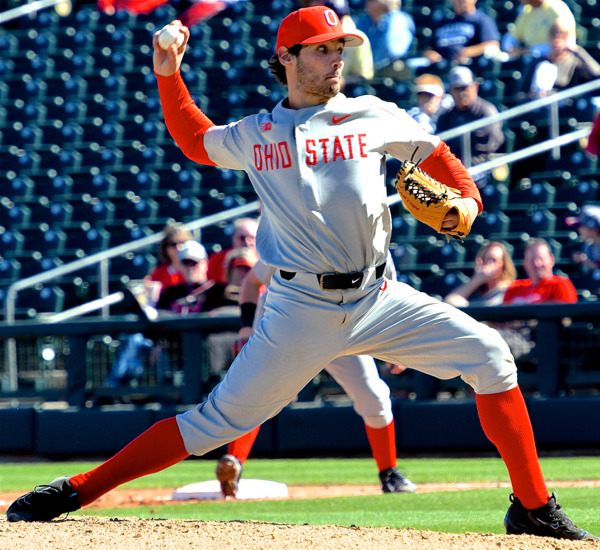 His performance against Oregon State was not a harbinger of things to come.  Pavlopoulos fought inconsistency and injury to finish 2-5 for the season with a 6.53 earned run average. 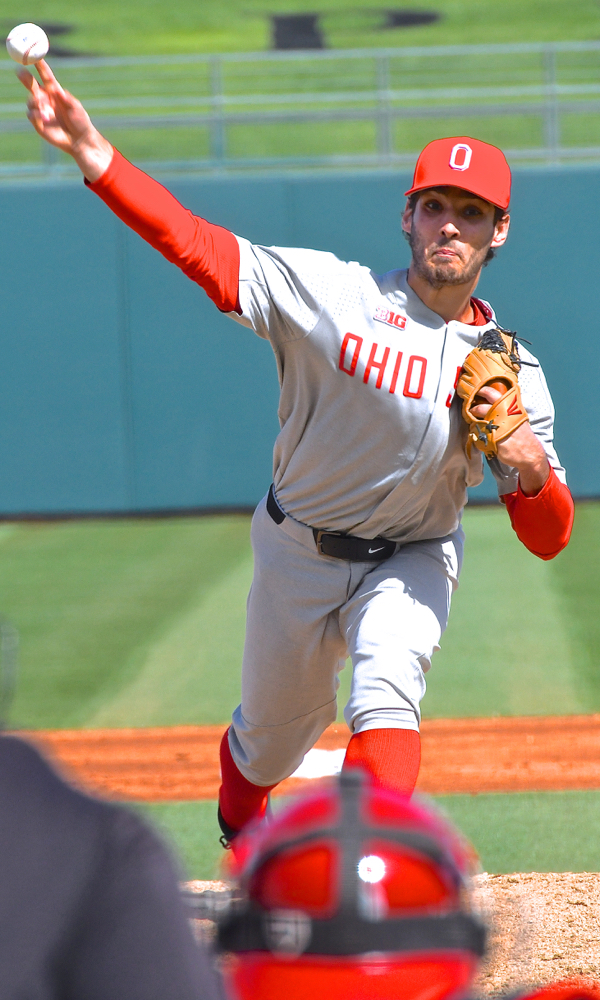 Yianni Pavlopoulos, as he pitched and won against Oregon State on February 24, 2017, just one of four pitchers (teams) to beat OSU during the regular season (52-4). (Press Pros Feature Photos by Julie McMaken Wright)