An impressive display across the court, and without individual highlights, sent #3-ranked St. Henry to its tenth win of the year, a shutout over Lehman.

Sidney – There once was a time when Greg Snipes’ Lehman Cavaliers averaged winning a state title in volleyball about every five years.

Greg Snipes knew he entered Tuesday’s match with one hand tied behind his back.

You can look it up, as Casey Stengel once said.  2000, 2005, and 2010 – the Cavaliers brought home the crown in each of those years with their familiar style of play – smallish, athletic, and defensive-minded.

Now, Snipes (in his 23rd year) admits to building character rather than champions as ‘the cycle’, the grim reaper of succession, has wrought its way with the Cavaliers roster.  Meeting #3-ranked St. Henry Tuesday night, with a 10-1 mark, Snipes knew he entered the match with (figuratively) one hand tied behind his back.

“We’ve just got a lot of young ones in there that are getting better,”  said Snipes of his 5-6 squad.  “They’re working, we’ve got a player out with a concussion (Ellie Scott) and Maddy McFarland played tonight, but her knee isn’t a 100%.  We’re not making excuses, and we made some improvements tonight.  Our defense was better than it has been, so we’re hoping to continue that way.”

“To be 10-1 right now, with the schedule we’ve played, we’re very excited about that,”  said Rosenbeck afterwards, obviously enjoying the fact. “When you consider the MAC schedule we play, with Marion Local, New Bremen, Coldwater and others, and to be 2-0 in the league, we think it’s a great start and we’re very pleased with that. 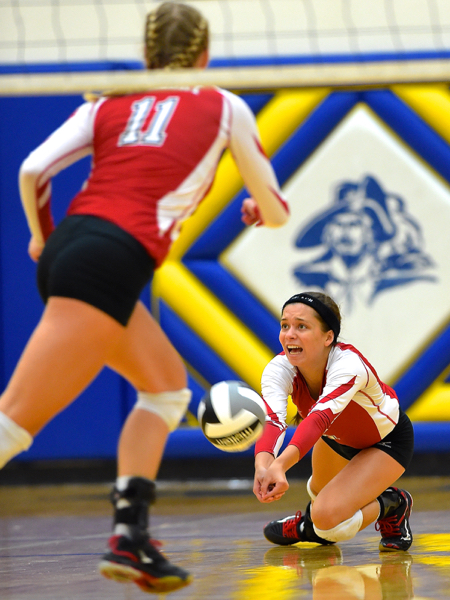 Junior Ashlyn Gerlach lunges for a ‘dig’ against Lehman.

“Right now we’re playing with a lot of confidence, and a lot of contributions from all over the court.  We really didn’t have a standout performer tonight – everyone chipped in and I’m proud of the girls. We’re ranked #3 in the state, we’re proud of that, and of course we’re trying to stay there.”

“I thought Carleigh Dietsch was great serving in the second game,” added Rosenbeck.  “She hit the zones we gave her and she kept them moving.  We also made good decisions with our setting, so I was pleased with how we played.”

As impressive as their record is, along with the ranking, one has to ask any MAC team about the prospects of playing New Bremen, and University of Michigan-bound recruit Paige Jones, whose play is the talk of area Division IV volleyball.

“We don’t play them until the end of the year,”  admits Rosenbeck.  “We played them a lot over the summer, and yes, she (Jones) is unbelievable.  She might be the best high school volleyball player I’ve ever seen, and their team is unbelievable, as well.  It’s not just her.  They all complement her play so well.” 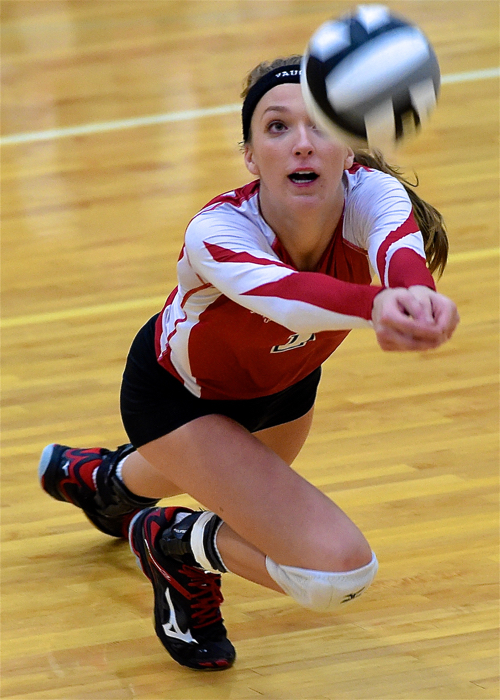 And Snipes, who knows something about the best, as well, was quick to agree that New Bremen, with Paige Jones, is a full day’s work for anyone.

“Well, she’s one of the best around, and that’s why she’s going to Michigan,”  he smiled.  “You really can’t stop her, you just try to slow her down a little bit.

“She could start for us,”  he deadpanned.

And there was a time when he had Paige Jones talent at Lehman, in 2000, ’05, and ’10, which conjurs comparison of teaching the game now…as to seeking titles back then.

“It’s still a fun process because this group of girls wants to learn,”  says Snipes.  “They work hard everyday so that makes it enjoyable.  They’re always ready to play.”

As for St. Henry, there is no rest at the Redskins are back on the road Thursday with Minster.

“On any given night,”  said Rosenbeck, asked to project their continued success between now and the end of the regular season.  “The MAC is that strong that it seems on any given night anyone can beat you.  In this league if you don’t play well you’re in trouble.  Every night you have to bring your best game to win the match.”

The cycle giveth…and the cycle taketh away! 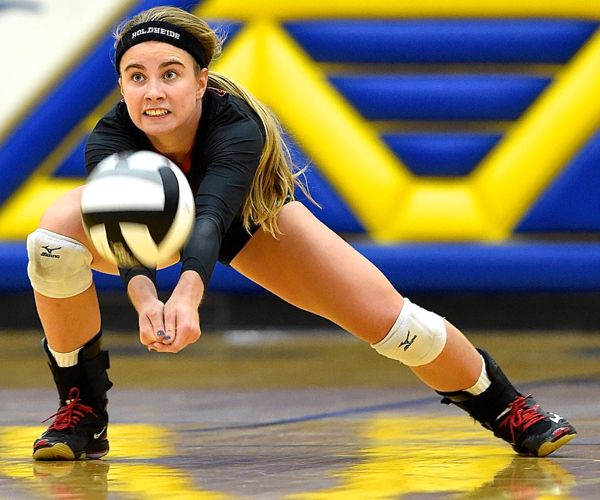 Senior Captain (libero) Julia Holdheide bumps one from the back row. 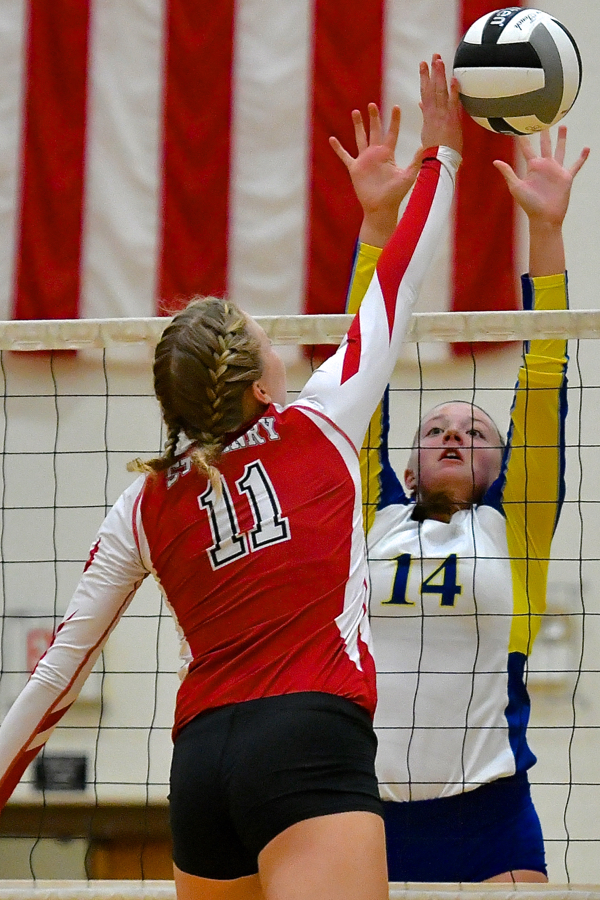