In a game with a lot of hitting, and no highlights, Marion Local avenged a couple of painful losses to Coldwater with a win that hardly sparkled.  It just felt good.

Coldwater – They say football, or any sport, can be a game of cliches.

Such as, in this case, the team that turns the ball over the least will win the game.

Well, that’s exactly how Marion Local avenged a pair of consecutive, and painful, 17-14 losses to Coldwater on Friday night, beating the Cavaliers 13-7. The Flyers turned a pair of Coldwater turnovers into touchdowns, and voila’…it was cliche’ come true.

It was tearfully close, hard fought, and the kind of emotional game you’d expect between two teams that know each other so well it’s hard, in Chip Otten’s words, to even score…much less win.

So close, in fact, that by halftime Marion Local had 125 total yards; and Coldwater had 124.

So close, in fact, that by game’s end Marion Local had 204 total yards; and Coldwater had 205.

So close, in fact, that the game ended on a Marion Local punt to kill out the clock; and Coldwater came within inches of blocking it to at least have one more shot – one more play – to put the ball in the end zone.

So close, in fact, that Coldwater’s Brad Giere left the field in tears, frustrated with his team’s inability to move the ball and take advantage of field position throughout the second half. It was that close – it was that hard-fought. Coldwater did score first, however, at the 5:40 mark of the first quarter when quarterback Sam Broering saw daylight through the middle of the line and sprinted 40 yards untouched, to the end zone to give the Cavaliers a 7-0 lead.

Marion would answer in the second at 8:53, when after picking up a fumble deep in Coldwater territory Nolan Habodasz punched it in from one yard out. The extra point attempt, however, by Alex Klosterman was wide left. It left the score 7-6, and a lot of people wondering. Would that point come back to haunt?

There was no offense to speak of for the rest of the half, save a missed field goal by Coldwater’s Blake Dippold from 32-yards out, and the Cavaliers led at the break, 7-6.

But on their second possession of the third quarter, Marion’s pass rush, which had been ferocious throughout the game, caught Broering from his blindside, the ball came out, and the Flyers hopped on it at the 10 yard line. Moments later Habodasz sneaked it across the goal line for his second TD of the night; and this time Klosterman’s extra point attempt was good for a 13-7 lead. 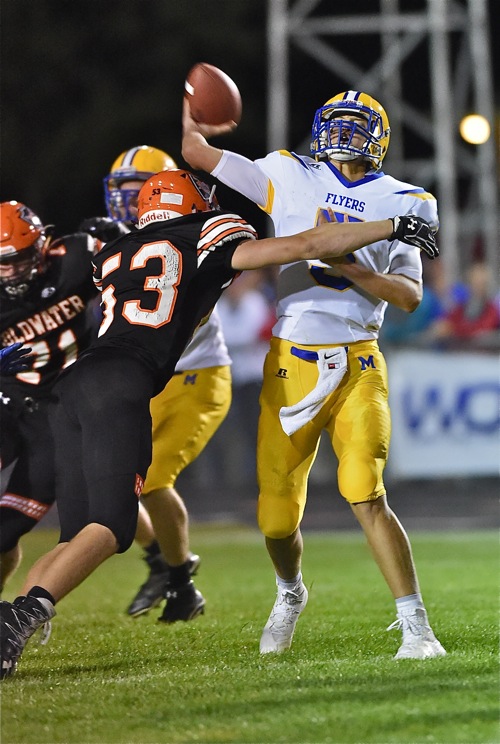 That was the sum total of the scoring as the defenses stiffened, both teams exchanged punt after punt; and Marion’s pass rush made life miserable for Sam Broering, sacking him six times on the night.

Marion held on a fourth down to force Coldwater to turn over the ball on downs, and likewise, Coldwater returned that same favor on Marion.

But with 2:45 remaining Coldwater got the ball back near midfield for one final surge. Marion held, taking possession with 1:27 remaining, and killed the clock…with that one final punt by Tyler Mescher.

“We played really hard,” said a relieved Tim Goodwin. “We didn’t play particularly well, but the kids played really hard. I told them…this was our first actual test after CJ and Patrick Henry. And we came out of it with a win. I guess you have to give some credit to Coldwater that we didn’t play better, because their defense was pretty good.”

As for Chip Otten, his voiced strained as he tried to put his own perspective on the rare Coldwater game where there simply were no highlights.

“It’s Coldwater-Marion,” he said. “You expect a game like this because we know them, they know us, and frankly it’s hard to get a score of any kind. 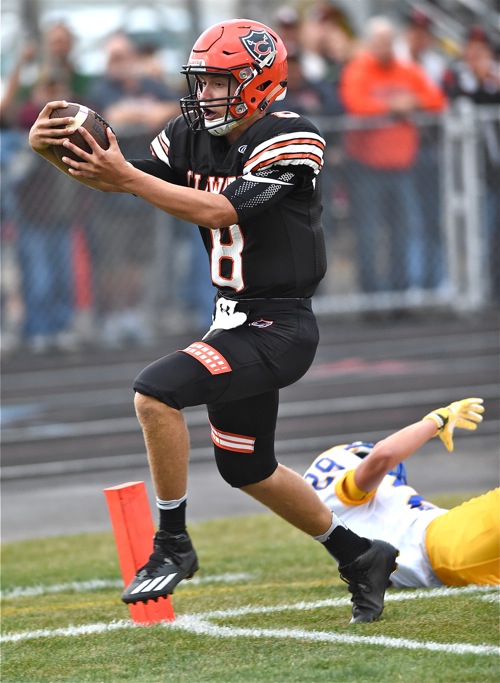 Coldwater’s Sam Broering crosses the goal line with the game’s first touchdown in the first quarter.

“The turnovers hurt us. We had two and they took advantage of them. Once again our defense played well enough for us to win, but the offense didn’t execute enough. Obviously, they had a lot to do with that with their blitzes. But you call plays that you hope will work against those blitzes. Their pressure was just good and they made it difficult. Hats off to them because they do what they do and do it well. When you have opportunities you have to make plays.”

It marked the first time that Coldwater had lost back-to-back regular season games since 1996, and the stress of losing, especially to Marion, was telling on Brad Giere and others.

“You invest a lot in games like this,” added Otten quietly. “Last week was the same because they played as hard as they could. When you do that and don’t get that result you want it’s tough. When you invest a lot throughout the winter and summer, the rewards are great…but so are the stings. It stings when you have nights like this.”

It was a happy, but not overly-jubilant Marion locker room. Players knew they had been in a fight, and Nolan Habodasz’s tired face showed it. His two touchdowns were the difference, and he gave credit for the tough goal line yards to his linemen.

“I just followed my line. They (Coldwater) did some crazy things, they made it tough on our sweeps, but we just tried to play our game and we got the win. Tonight was the first really tough competition for us, and we showed up to play.”

Apprised of his coach’s comment that was the Flyers’ first real test of the season, Habodasz was asked what grade they deserved.

Each team had one penalty.

But Coldwater had those two costly turnovers, and Marion didn’t.

It was, as Chip Otten alluded to, tearfully close.

It was, as Tim Goodwin alluded to…just nice to beat Coldwater. 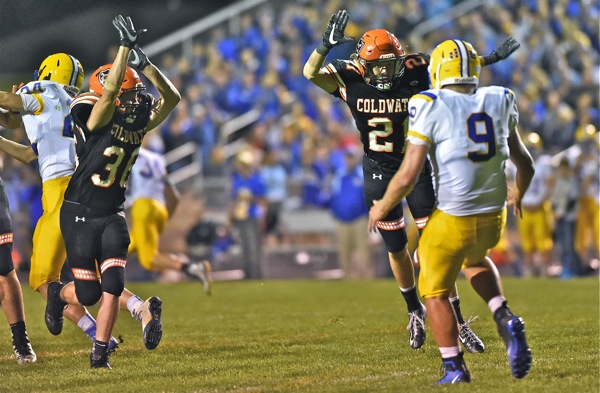 To the last kick…Coldwater desperately tried to block the punt of Tyler Mescher that ended the game. 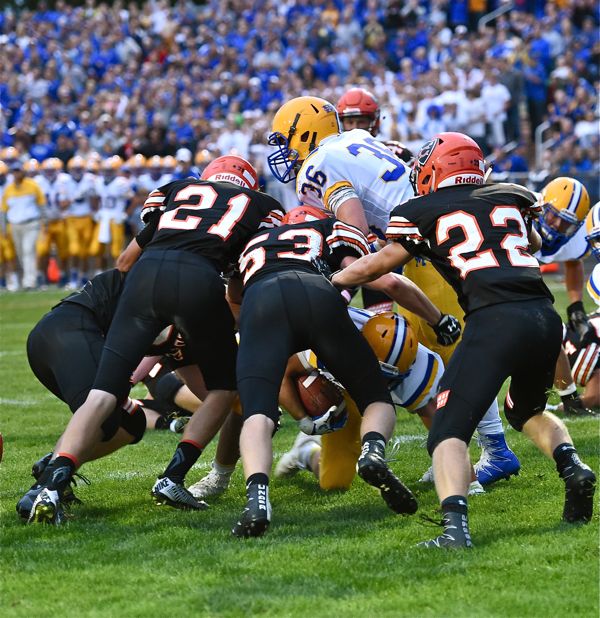