They were out-sized, and Southeast Missouri came to town with the full complement of ‘macho’.  But the Dayton Flyers once again proved…that’s is not the size of the dog in the fight, but the size of the fight in the dog.

Dayton – When a football team meets a bigger, faster, stronger opponent, a bunch of guys who look like Paul Bunyan in cleats, in order to win the little guy needs big plays.

So if that’s what it took, that’s what the University of Dayton did Saturday afternoon at Welcome Stadium against Division I Southeast Missouri State.

And it takes heart, courage and diligent perseverance not to accept what seemed like a sad ending.

Because of so many big plays by so many different players, the Flyers scored a 25-23 victory, making sure the big boys from Cape Girardeau, Mo., had a solemn 6 ½-hour bus ride back home.

The big plays? Just to mention a few:

— Southeast Missouri, trailing by eight points with 1:47 left, started at its 13. Quarterback Jesse Hosket completed seven of eight passes, including a touchdown with 0:46 left to draw within two.

Then came the biggest of the big plays. Southeast Missouri went for two to tie it and Hosket rolled right and fired a pass into the end zone. Linebacker Jack Craig was Jack-on-the-spot and intercepted it.

“Bunkers” is proud to sponsor coverage of UD football on PressPros Magazine.com.

It was retribution for the senior from Lisle, Ill. Midway through the third quarter Craig was beat on a 68-yard touchdown pass that gave the Redhawks a 17-16 lead.

“I had given up a touchdown and I was just trying to make a play to help out the team on the two-point conversion,” said Craig. 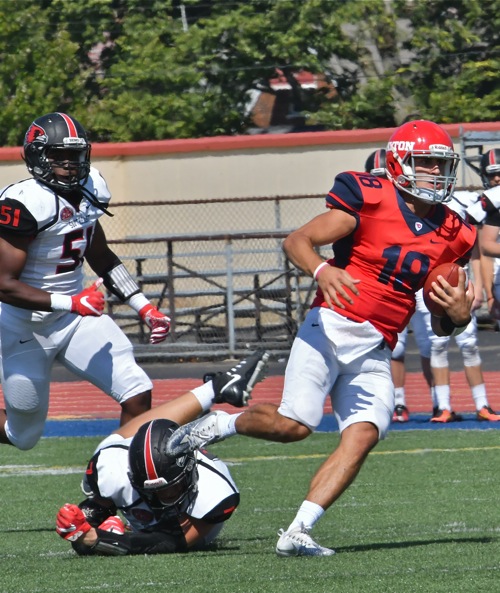 Quarterback Kyle Kaparos hot-foots it away from pressure in the first half of Saturday’s win.

Help out? Like Mighty Mouse, he saved the day. “I was man-to-man on the receiver and saw (the quarterback) rolling out and I thought he was going to keep it. But I was able to read his yes and make a play.” THE play.

Chamberlin noticed something before Southeast Missouri readied itself for the two-point try, which is why he called time.

“They were setting something up that we knew was different,” he said. “We knew they were going to run some kind of pass with a drag underneath and Jack Craig played it perfectly and made the pick.”

And it was retribution for him, too. After winning the placekicking job just five days before the season’s opener at Robert Morris, Sandler made only one of three field goals, one late in the game, and the Flyers lost, 13-10.

On Saturday, his fourth success was a 38-yarder with 2:59 left that gave the Flyers the eight-point breathing room they were able to protect.

Asked if his kicking was big after last week, the true freshman from Greenwood, Ind., broke into a broad smile and said, “Yes, sir.” 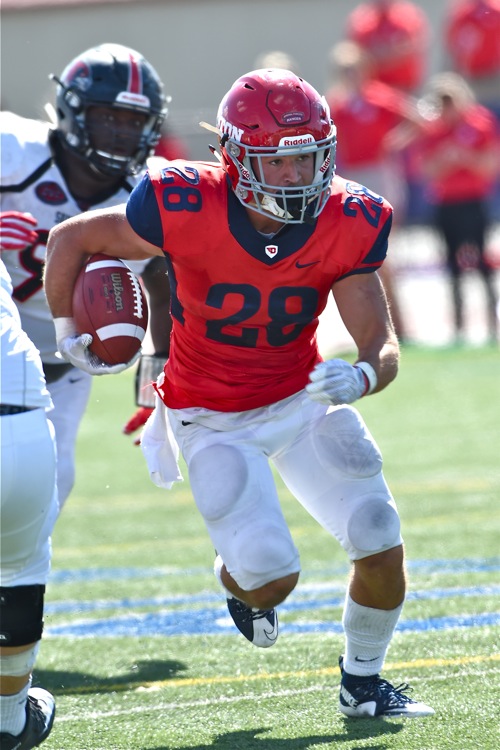 When he was told he tied a school record with his four field goals, he said, “I did not know that until you just notified me. That’s crazy to think about and now I have to break it.”

And what was he thinking as he lined up for his fourth kick? “I knew that I had to make it. Come up big to make my teammates proud.”

Said Chamberlin, with a broad smile, “Look what everybody was saying last week, ‘Oh, you oughta bench him. He can’t make a field goal.’ And that’s why we didn’t bench him. He came through and I knew he would. He showed it in camp.”

— Tailback Tucker Yinger, a senior from Columbus, carried the ball 24 times for 141 yards, running against a front three that averaged more than 300 pounds.

Big Plays?  On 2nd-and-21 in the first quarter, he ran 20 yards, then ran two more on the next play for a first down that led to UD’s first touchdown. In the second quarter on a 3rd and 20, Yinger zipped 21 yards for a first down, keeping a drive alive that enabled Sandler to kick a field goal for a 13-7 lead.

Yinger, a mere 6-foot and 190 pounds, is seemingly inexhaustible and his 100-yard day was the sixth of his career.

Tired?  “Yes, yes,” he said. “I do get tired, but I don’t have a choice. They were very big and very intimidating. But that’s how every team is against us and we just go out and play the same way. 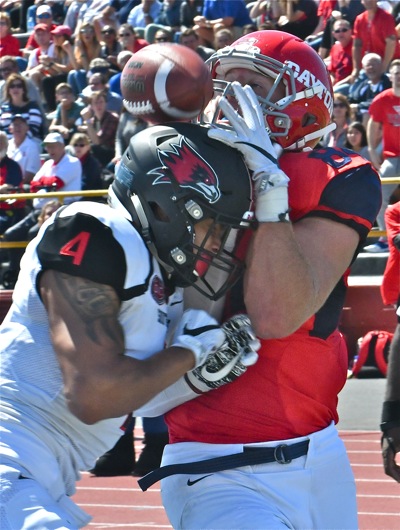 Tight end Adam Trautman paid the price, but made the catch against SEMO’s Mike Ford.

— David Leisring, a junior safety from Cincinnati St. Xavier, played like three men. He made 13 tackles, intercepted a pass and blocked a punt.

His blocked punt in the third quarter led to another Sandler field goal that pushed UD’s lead to 16-7.

The victory extended UD’s regular season home winning streak to 14 straight and Chamberlin was ecstatic over his team’s effort.

“To go up against a team that played Kansas last week and was down 14-7 just before halftime, and their yardage against Kansas was respectable and for our team to play the way we did today and not lose our poise when things weren’t going our way was special,” he said. “We made the plays when we had the opportunities.”

Chamberlin was undaunted by last week’s loss at Robert Morris, a team the Flyers had beaten 15 straight times.

“We’re a good football team and we knew that last week,” he said. “We just made some blunders late in the second half.”

There were no blunders this week, just a bushel basket full of big plays.

“Southeast Missouri was huge and physical,” he said. “They had athletes. They moved, and they are hard hitters. But our kids kept pounding.” 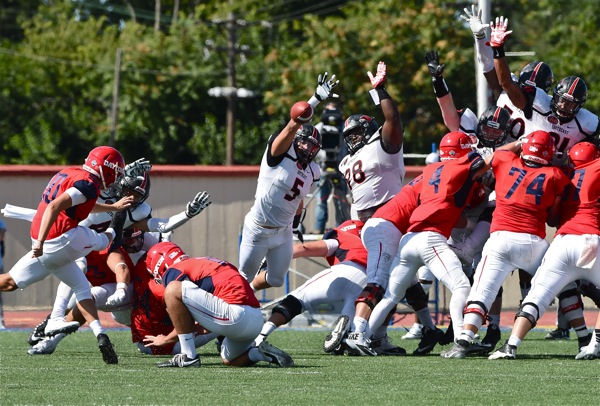 Freshman kicker Patrick Sandler tied a school record with four made field goals in the game. 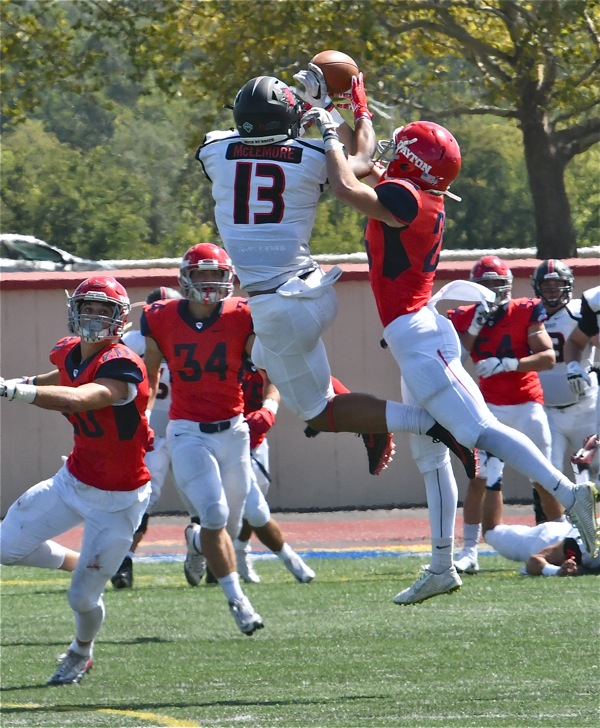