Anna Makes A Statement In Versailles…

The surging Anna Rockets scored early, and they scored often, exactly a dominating win over Versailles on their home turf.  And a statement to future MAC opponents…it was no contest!

Versailles – With two non-conference games in their rear view mirrors, the Anna Rockets invaded Hole Field in Versailles seeking a bit of revenge.   The Tigers had clipped the home standing Rockets in 2016 by a 20–12 score.

The Shelby County team not only gained a measure of revenge, but sent a message loud and clear that they will be a formidable foe for any MAC team as they handily defeated Versailles in front of a wet and not-so-wild crowd,  52–20. 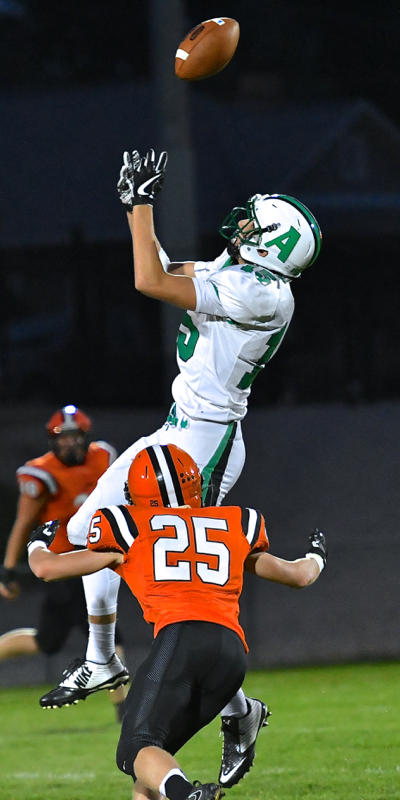 As is the case more often than not, the ten football schools that make up the Midwest Athletic Conference, completed their non–league tests in flying colors, posting a composite 16–4 mark, highlighted with 6 schools at 2–0, and the remaining 4 at 1–1.

This means that MAC fans can now get ready for some real slobber-knockers as week three was dotted with a number of great games.

The MAC opener in Versailles seemed that it could be one of these, but the Rockets came out firing on all cylinders, scoring on their first possession in three plays as Caleb Kauffman hauled in a short swing pass and romped into the end zone from 35 yards, giving the Rockets a 7-0 lead after the Robert Flynn point after.

Versailles responded with what started out as a promising drive, only to lose the ball with a fumble at the Anna 34.

The Tigers avoided a second Rocket touchdown as the orange defense held Anna to a Flynn field goal with 6:26 remaining in the first quarter.

In his post-game comments Versailles coach Adam Miller cited the miscues at crucial points in the game as problematic.

“We knew coming in we were facing one of the elite teams in the MAC and mistakes would have to be minimized. We were not able to limit mistakes, and against a great team, this is the result you get.”

On their second possession the Tiger offense quickly showed Tiger Nation that they were not ready to fold the tent. In 5 plays covering 70 yards, the Tigers scored their first TD on a 16 yard pass to George Grow, who also had a 16 yard run and a 25 yard reception in the scoring drive.

The versatile Grow was a bright spot for the Versailles offense as he finished with 123 yards in receptions, and 45 rushing yards, leading the Tigers in both categories.

Sensing a new-found confidence, the Tigers stuffed Anna on a 4th and 3, but unfortunately, the Rocket defense would be as good as their offense, and for the most part contained the Tiger offense for the majority of the game. 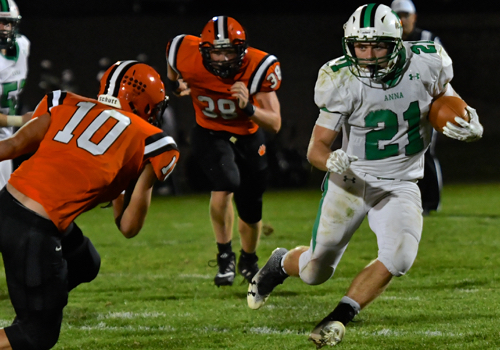 Senior Aidan Endsley showed why he was the MAC stop statistical back in 2016.

The Rockets would score on their next two possessions; quarterback Travis Meyer on a short jaunt around the right side, and Aidan Endsley scoring from the two.

With 1:07 remaining in the half the Tigers sent their fans into a frenzy as George Grow took a bubble screen to the house from 77 yards out, closing the gap to a manageable 24–14 deficit, and yet to receive the second half kick-off.

The plan to get back in the game was short circuited by the multi-faceted Rocket offense.

In a mere 24 seconds Anna was in the end zone after a long Riley Huelskamp kick return, and a 49 yard TD strike to Austin Fogt, moving the score to 31–14 and effectively ending the game. 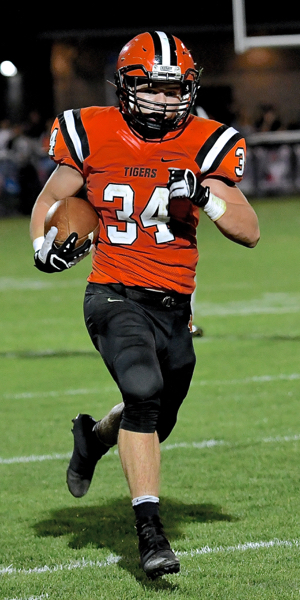 The Tigers’ final score came on a 24 yard pass to George Grow.

After a short Versailles punt the Rockets score the clincher on 5 running plays in less than two minutes, gaping the Tigers by a 38–14 count. The final Tiger score is tallied once again by George Grow on a 24 yard pass.

Not done, Anna tacked on two more touchdowns, with the final TD setting up the running clock, the clearing of both benches as the JV’s got a little warm up in preparation for their Saturday game, contributing to the 52-20 final score.

Though clearly pleased with the win, Anna coach Nick Marino was not totally satisfied.

“There are some things that need to be cleaned up.  Nine penalties is too many, we missed a few assignments, and I did some bad play calling. But all in all, we played a well rounded game against a good quality MAC opponent on the road.

How dominant was Anna on this night?

The Rockets finished with 463 total yards compared to 242 for the Tigers, and twenty first downs to eight.

The difference in team speed was telling throughout the game.  As a confident group of Rockets left Hole Field, the noise they made should send a statement to the rest of the MAC.  They’re here to compete in 2017. 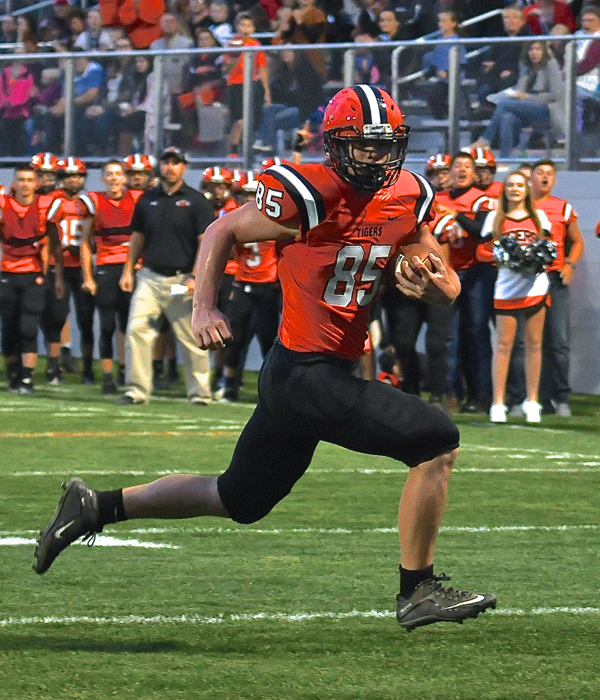 Versailles’ Evan Hiestand races for the end zone and a Tiger touchdown. 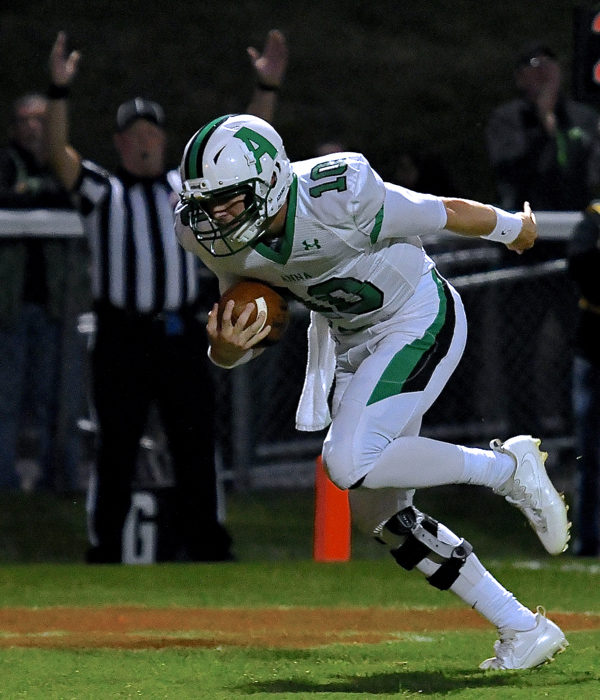