Minster Slips Past St. Henry (Again) To Advance In Tourney

In a Sectional Tourney game expected to be close, it played out as expected.  In a repeat from the MAC regular season,  Mike Wiss’s Minster Wildcats edged John Dorner’s and St. Henry by a run.

By Stan Wilker for Press Pros
Minster – With two Ohio baseball Hall of Fame coaches squaring off for the second time in 2017, the anticipation Thursday for a classic MAC battle was in the air, and both coaches and both teams delivered.
In a pitching duel that was dictated by great defense, Minster, Division IV champions in 2011 and ’12, made a single run in the fourth inning stand up to beat St. Henry, 1-0.

Mike Wiss and John Dorner are not only great High Schools coaches, but good friends whose coaching paths crossed as they worked together with the St. Marys Legion team a number of years ago.  Meeting in Thursday’s sectional tournament game this week, both coaches felt the game would be a close encounter once again.

Dorner told his squad, “There will not be many chances for runs tonight; there are two great pitchers on the mound who work fast.”  Which reflects the coaching philosophy of both Dorner and Wiss.  “We want our pitchers working quickly,”  they’ll tell you.  “We feel it keeps our defenses into the game”.

No truer words ever spoken as both squads sparkled defensively.   Fans were still at the concession stand and the first inning was in the books as pitchers Aaron Ernst (Minster), and Parker Link (St. Henry), breezed through their half of the inning.
Fireworks erupted in the second inning as the Redskins opened with base knocks by Curtis Uhlenhake and Nate Lefeld.  DH Ryan Bruening then laid down a perfect sacrifice, sending ‘Skin runners to second and third.  Wiss, anticipating the close game, had his entire infield playing in for the possible play at the plate.  Second baseman Jay Knapke stepped to the plate in the game’s first RBI situation and it appeared that he would deliver.
However, Jon Niemeyer grabbed the second out of the inning off Knapke’s medium depth fly ball, and Dorner, as expected, did not hesitate.  He sent Curtis Uhlenhake to the plate after the tag.  But Niemeyer hit his cut-off man,  who delivered a strike to Wildcat catcher Ben Stubbs for an inning ending double play.

It would be the first of two assists for the Minster outfielder.  In the 6th inning he made a spectacular diving catch of a sinking line drive by Parker Link and then pegged a perfect throw to second to double up St. Henry’s Ryan Luttmer, who had doubled after Matt Siefring opened the inning with a strikeout.
Feeling some momentum after the twin killing, Minster came to bat in their half of the second and promptly put their first two runners aboard as Stubbs reached on a error, and DH Isaac Dorsten ripped a single.
Jack Heitbrink was called on to sacrifice and promptly executed the perfect bunt sending Wildcat runners to second and third.  Third baseman Adam Knapke coaxed a walk loading the bases with one out.

Redskin hurler Parker Link entered the game with a 1.72 ERA.

But Redskin hurler Parker Link, who entered the game with a 1.72 ERA, was up to the task as he induced Carter Hogenkamp to hit into a rally-ending double play, snuffing out the potential for a big inning.

Minster finally broke through in the bottom of the fourth on a Heitbrink single, a wild pitch that sent him to second, and a run-scoring single to center by teammate Adam Knapke.  It turned out to be the game winner – the only run!

Wildcat ace Aaron Ernst seemed to really settle in after the scare in the second, and proceeded to retire seven straight Redskin batters heading into the 6th inning.
He made quick work of the ‘Skins in the 7th, retiring the side on two groundouts and a fly to center field.  And after the game the Wildcat hurler would only acknowledge the great defense his teammates displayed behind him.
The two storied programs entered the tourney tilt with contrasting records. Minster was 17–6 and winners of the past 12 of 13, while St. Henry was a uncharacteristic 13–12.
Storied?  John Dorner has won 505 game in his career, and St. Henry has won 3 state titles, (1999, 2000, 2003).  And long ago they were runners-up in 1945 and 1946 with Wally and Eddie Post.  Remember them?
Mike Wiss has 402 career wins and the Wildcats captured state titles in 2011 and 2012 and a runner–up finish in 2003.  Records entering Thursday were meaningless!

“It comes down to the little things that have to be executed correctly, and games like this may come down to three or four pitches,”  said Wiss after Thursday’s game.
And Dorner concurred.  “Basic baseball plays determine the outcome of games like today’s.  They did them, and we didn’t.  I wish Mike and the Wildcats the best of luck.”

The irony?  Both coaches had said before-hand that runs would be at a premium, and their instincts were correct.  Great defense behind great pitching made for precious few opportunities to score and Ryan Knapke’s run in the fourth proved to make their pre-game predictions prophetic.

After the game John Dorner lamented about what could have been.
“You know we played 18 innings against these guys this year and gave up just 2 runs,”  he said, matter-of-factly.  “Normally that would result in a 2-0 ledger, but not against these guys.  But I’m so proud of my team, especially my seniors.  We probably hit the ball better today than at any time this year.  They just made some great plays.”
More irony?  For all the success that these programs have enjoyed over the years Thursday was their first tourney encounter since 2002.  For fans from both schools, and people who just enjoy good baseball, one would hope it’s not another 15 years until Minster and St. Henry meet again.
They seem to play their best when their season is on the line! 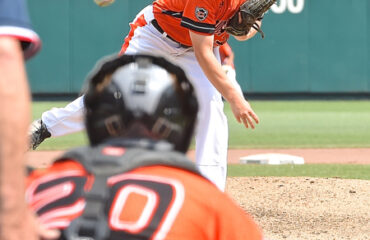 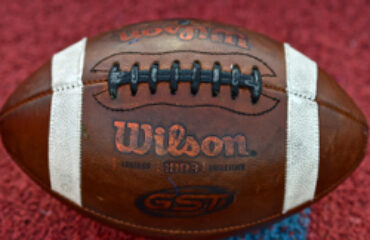 A Turnover In Minster That No One Seems To Mind….