Hoard on OSU: Buckeyes Open With A Solid Win Over K-State

The Buckeyes turned six hits into six runs, scoring three in the third and three in the fourth, and took it to the house on the strength of a premium pitching performance by Adam Niemeyer.

The Buckeyes turned six hits into six runs, scoring three in the third and three in the fourth, and took it to the house on the strength of starter Adam Niemeyer and reliever Seth Kinker.

“Adam Niemeyer gave us six really solid innings,” Coach Greg Beals said. “He gave up a run in his last inning, but five scoreless, a great quality start…and Seth comes in, as you knew he would, and for the most part, he executed his pitches and did the job protecting the lead.”

K-State, which used five pitchers, held the Buckeyes hitless through the first and second and had two outs in the third. That’s when Tre’ Gantt got things going.

Gantt, hitting leadoff, roped a triple down the right field line. That’s when OSU began to offer a hint to what its 2017 identity will be.

Co-captain Jalen Washington fought off a pitch that was cuffed at second, scoring Gantt and taking a lead that was never truly challenged.

Let the games begin… with the handshakes and ground rules, the season is underway.

“The good thing,” said Washington, “was that guys were hitting balls to the alleys and driving balls down the line. We weren’t hitting balls over their heads…The new guys were giving us good solid at-bats. It was really good to see.”

The Buckeyes struck again in the fourth, Brady Cherry started things with a walk. First baseman Bo Canzone, another JUCO transfer, followed with a single. Catcher Jacob Barnwell laid down a sac bunt to move the runners over.

Bruns is proud to sponsor the Buckeyes on Press Pros Magazine.com

A wild pitch allowed Cherry to score from third to make it 4-0. Gantt worked another walk and Washington, a .249 hitter last season, doubled to left scoring OSU’s fifth run of the game.

Score board tells the story.. as the team gathers after the game.

An intentional pass and another walk—this one to Tyler Cowles—made it 6-0.

“We did a good job there in the middle innings,” Beals said. “We got some opportunities and we took advantage of them. We did leave some other opportunities out there (they left eight runners on base), and we need to get better at taking advantage of those situations, but for the most part we were pretty good.

“These guys are doing what I thought they would do, giving us some tough at-bats. We are going to run some pitch counts up. We were able to do those things today. We were able to chase their starter really early (after the third). That’s not only the result of some hits, but some quality at-bats getting that pitch count up.”

Captain Jalen Washington led by example with a hit, run and an rbi.

The top three in the line-up—Gantt, Washington and McGowan—accounted for three of OSU’s six hits and four of their six runs.

“Those guys are our starters—particularly Tre’ and Jalen—and they did the job today,” Beals said.

Nuts and bolts aside, there were subtleties to consider, as well.

“I saw guys handle the excitement of the situation really well,” Washington said. “You can’t help but be excited, but we handled it well…Guys were under control and we were able to push the line.

“We got those first three runs after two were out. I saw a team that kept its composure and took advantage of opportunities. We missed some, too. We actually thought we should have scored more runs…But this was the opener. I was nervous until that first ground ball (at short).”

NOTES: OSU plays two Saturday. They meet Delaware at 2:30 p.m. and Pitt at 5:30…Yianni Pavlopoulos, last year’s closer, will start against Delaware, while sophomore Ryan Feltner goes against Pitt…This doesn’t mean, however, that Pavlopoulos has cracked the starting rotation. “Oh, no,” Beals said. “We’ve got three straight weekends when we will need four starters. Yianni has looked awfully good, but Jake Post is also in the picture.”

Gathering to regroup after the Wildcats scored against the Buckeyes. 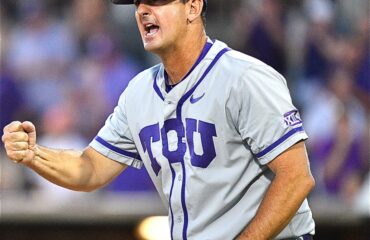 First Words With Mosiello…The Buckeyes ‘Get Their Man’ 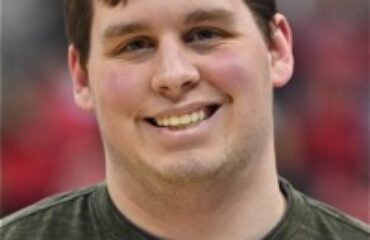 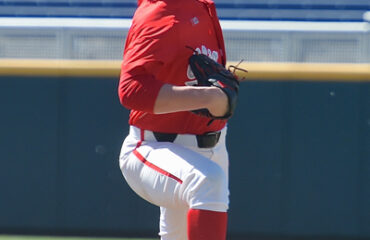 Ohio State Runs Out Of Arms, Falls To No.1 Minnesota