They’re the reigning state champs for a reason. Watch Jackson Center play and count the ways they help themselves win, and win, and win again.

Russia – There was never much doubt about who would win the match. Defending state champ Jackson Center went on the road to Russia Tuesday in Shelby County League action.

And to their credit, the Russia Raiders (2-3) put up a spirited fight in the first game before falling 25-18. And then….

“We began to focus on the little things that I preach about all the time,” said Jackson coach Kim Metz.

They went on an 11-1 run at the outset of the second game, and just smothered Russia with their hitting, defense, hustle, and energy. They would eventually take that game, 25-8.

Smelling blood, they came right back to take the third game in similar fashion, 25-9.

“We poked the bull in the first game,” said Russia coach Aaron Watkins. “I told the girls we poked the bull and then we ran the other way. They have a veteran team and we have a young team. But I was proud of what I saw from the girls.”

“It’s just a bunch of kids doing what they love to do,” said Metz afterwards.

Perhaps, but special in one very different way pertaining to today’s culture.

Clipboard in hand, she doesn’t miss a thing, even out-of-bounds calls. And Kim Metz’s methods have made champions of the Tigers.

“I insist upon it,” says Metz, who carries a clipboard and writes something about every point scored in the game. Her notes to address come practice.

“I push that,” she adds. “I poke, prod, whatever it takes to make them focus on attention to detail. Whatever it takes to make the big things happen, and it’s been that way since the beginning of July. Being balanced and getting yourself prepared to do the things you want to do. If you’re going to just stand and watch you obviously won’t have your body ready to play.”

What about that clipboard?

“I write down the end results of each point,” says Metz, an assistant treasurer for the Jackson Center school district. “That way we can keep track of what’s causing the errors that we make on the court.

The “Heidout ” is proud to sponsor coverage of the 2016-17 SCAL Sports on staging.pressprosmagazine.com.

“But I learned that from my old coach, Wade Wilhelm. He gave me that little sheet of things, it must have been 20-plus years ago. It helps me keep my mind busy and up with what the kids are doing.”

She stalks the sidelines, observant of every action and reaction by both teams. She misses nothing.  She even drives the team bus.  And in truth, her players feed off her obsession for details. They’re not prohibitive looking, but they’re energetic on defense, lethally efficient on service opportunities, and they rarely missed on kill attempts Tuesday, feeding off Russia’s frustration in the second and third games.

“They have great maturity,” stresses Metz. “I have seven seniors who have played since they were in the third grade. So they know what to expect from me. They may not be able to handle it all the time. There’s a lot of emotions flying around out there and you know darn well they want to do the best they can. And that’s all I ask.

“They’re really intelligent, brilliant kids. Three, four of them have 4.0 GPAs, so you know they’re figuring things out and processing the game They’re just a lot of fun to coach.”

There is no substitute for experience like that, of course, so Metz and the Tigers move on towards what they hope to be a reprise of last year’s Division IV title – or at least an extended tournament run. They played Tuesday like they were already in tournament gear.  In four matches this year they’ve lost but one game.

“But that’s the way every match is going to be for us,” added Metz. “Everybody’s gonna’ come at us fully loaded. We have to be mentally tough to answer every challenge. It’s the habits that we’ve been working on all this team that help you answer…that help you create the opportunities.

“Russia played well in the first game tonight. They came at us. They pushed us to the limit. They had us on our heels a bit. When you’re not creating opportunities you’re giving opportunities to somebody else.”

The little things have grown into the habits that Metz and her Tigers rely on, and Tuesday it all added up to a clinic. The bull got poked, in Watkins’ words, and it responded. It always has.

And safe to say for the time being…it always will!

Loramie Celebrates 50 Seasons … And Another Win 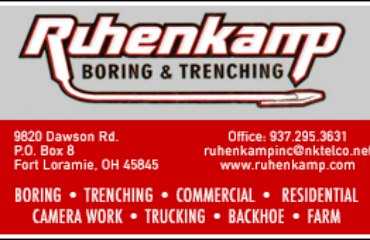 The Alarm Went Off At 8…Russia Stuns Anna