Bucks Baseball: Beals Not Satisfied With Finish At Coastal….

The busses were idling. OSU players milled about with fans and parents before boarding and the ride to the airport where their charter awaited for the flight back to Columbus.

The Buckeyes had finished the four-game Coastal Carolina Baseball by the Beach Tournament 2-2. Minutes earlier they had lost a one-run, 10-inning affair with Coastal, 3-2, on a bases-loaded, walk-off single.

Words of encouragement were offered by those who gathered round as the players stowed their bags and said their goodbyes..

The Buckeyes were leaving South Carolina, 5-2-1.

OSU coach Greg Beals heard it, too, and as soon as the doors were closed on the bus and he was alone with his team, he addressed his players.

His voice was stern, his message direct. There is no room for satisfaction or contentment. Not now. The road is long and rough. The Big Ten portion of the schedule will be upon them before they know it.

“A month,” he said. “One month and it’s on us. We have to keep improving and keep getting better.”

To this point, they are still finding their way, putting the pieces together; finding out who wants to play and who will perform consistently.

Thus far, their most remarkable characteristic is their depth among both position players and the pitching staff.

Duke hands OSU its first loss of the season and do so handily.  Starter Bailey Clark performs as billed. He’s projected as a first-round draft choice in June. He throws six innings of one-run ball at the Buckeyes and strikes out 10.

“He (Clark) had our bats stuck up our, uh. Well, we could never catch up with him,” Beals said. “Put it that way.”

The Blue Devil bullpen adds three innings of shutout ball, and with Evan Dougherty doing the offensive damage—three home runs and five RBI. That was that.

“He (Dougherty) didn’t hit a home run all last season,” Beals said. “He hit something like .148. He’s their eight-hole hitter. We hit his bat a few times. Crazy.”

Buckeyes starter Adam Niemeyer matched Clark’s shutout performance for four innings, but Duke got him for four in 6.2. Seth Kinker pulled OSU out of the fire in the Blue Devils’ two-run seventh, but Kyle Michalik yielded four runs in the final two innings.

OSU’s only run came on Ronnie Dawson’s first home run of the season.

OSU bounced back from Thursday’s loss by dropping the 19th-ranked Chanticleers behind a strong outing by starter Tanner Tully and a breakout performance by freshman Brady Cherry.

Cherry, who started as the DH, was 3-for-4 with two home runs and three RBI. “Cherry is a solid ballplayer, who is ready to play and wants to be out there,” Beals said. “We believe he is going to be a real contributor to this team this year and in the future.”

Down 2-0, the Buckeyes broke the game open with a five-run fourth. After walks to Daulton Mosbarger and Dawson, Nick Sergakis, who started his career at Coastal, banged a three-run homer to left-center. (It was the start of a big weekend for the senior co-captain.”

Jalen Washington reached on a walk, as did Zach Ratcliff. Washington was caught stealing for the second out of the inning, but Cherry hit his first home run of the game to make it 5-2.

Cherry’s second homer, another shot to left-center, gave the Buckeyes an insurance run to make it a two-run game.

Michael Horejsei pitched 1.1 allowing one run on two hits and Yianni Pavlopolous picked up his first save of the season with a scoreless ninth.

Tully allowed two earned runs and struck out nine in 6.1.

Pavlopolous pitched a scoreless ninth to earn his second save of the season and is closing in on being designated OSU’s closer.

For the second time this season, junior Jacob Bosiokovic came up big with the long ball.

OSU went into the bottom of the eighth trailing 4-3, but Bosiokovic belted a two-run homer to give OSU a one run lead.

“Big hit,” Beals said. “Big hit. He had a rough couple of days (against Duke and Coastal,” Beals said. “But when he came around third, I said, ‘You just keep playing big guy.’ He has so much talent.”

The homer was Bosiokovic’s fourth of the year and gave him the Big Ten lead.

Pavlopolous pitched a scoreless ninth to earn his second save of the season and is closing in on being designated OSU’s closer. “We put him in two close situations and he took care of it both times,” Beals said.

Austin Woodby got the win in relief of starter John Havird, who worked 6.1, allowing three runs, two earned, on four hits and a pair of walks.

OSU collected 11 hits. Sergakis continued his homecoming with a 3-for-4 performance. Washington was 2-for-4 and Mosbarger, starting for the injured Troy Montgomery in center, was 2-for-4 with two runs scored.

OSU took a 2-1 lead to the bottom of the ninth, but Woodby gave up a two-out, run-scoring triple to Zach Remillard sending the game to extras.

After OSU was shutdown in the top of the 10th, Seth Kinker took the mound. The right-hander allowed a leadoff single and then walked two, one intentionally, before Anthony Marks delivered a walk-off, game-winning single.

Freshman starter Ryan Feltner was solid. He worked five innings, allowing one run on four hits. He stranded base runners in each inning he worked, a total of seven.

OSU was held to six hits, four of those provided by the three- and four-hole hitters, Dawson and Sergakis.

Dawson was 2-for-5. It was his third multi-hit game. Sergakis finished the weekend with a 2-for-4 showing with a run scored and an RBI. In the four games at Myrtle Beach, Sergakis was 8-for-16 with two doubles and five RBI.

Brady Cherry was named Big Ten Freshman of the Week.

For the season, Sergakis is hitting .455 and has hit in all eight games.

“Nick doesn’t realize all the things he does to help this team,” said Buckeyes coach Greg Beals. “The best thing Nick can do is keep on doing what he’s doing, playing good, hard Nick Sergakis baseball.”

NOTES: Next weekend, OSU heads to Port Charlotte, Fla., for the Snowbird Classic. They will play Seton Hall, Boston College and Illinois State…Brady Cherry was named Big Ten Freshman of the Week. Look for Cherry to make his mark and sooner than later…Troy Montgomery is expected back in the starting lineup this weekend. He collided with L Grant Davis on a play Friday and had to follow concussion protocol…Ronnie Dawson jumped his average 67 points at Myrtle Beach. He’s sitting at .278 with five extra base hits. “Ronnie is fine,” Beals said. “His quality of at-bats has improved. He’s hitting the ball hard and to all fields. He jumped on the guy from Duke (Clark) and just blasted one to straight-a-way center…Yeah, Ronnie will be fine.” 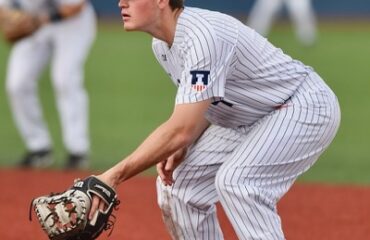 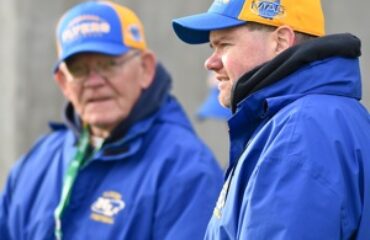 Tournament Wrap-Up: What No One Heard, And Pics Not Seen